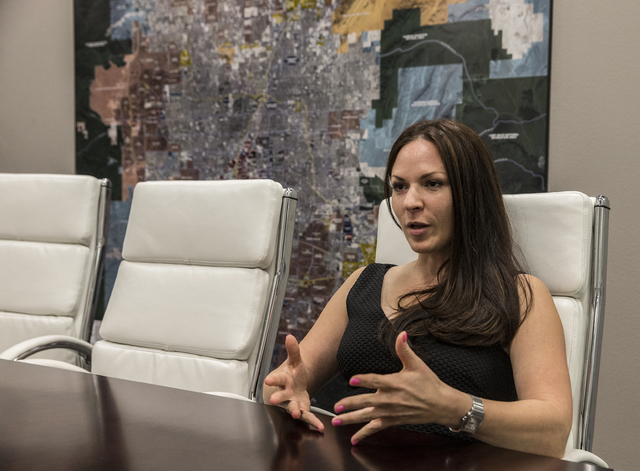 Jennifer Ott, an executive vice president in ROI Commercial Real Estate’s retail division, will take the helm of one of the largest commercial real estate organizations in Las Vegas in 2017.

On Jan. 1, Ott, a 14-year-industry veteran, will start her term as president of Commercial Alliance Las Vegas, the commercial arm of the Greater Las Vegas Association of Realtors.

The Northern California native is a graduate of the University of Nevada, Las Vegas and earned an undergraduate degree in business with an emphasis on marketing.

Q: How did you get into commercial real estate?

A: It was kind of a fluke. I graduated college the summer of 2002, and my uncle’s mother-in-law was a commercial real estate broker at the NAI office that was in town at the time. She was getting ready to go on vacation, and she asked if I would come in and help out their partner and their junior assistant.

Q: What was the retail market like after the recession?

A: When we started to come out of the recession, major retailers started to kick the tires first, just asking questions: What’s available? What are the rates like? What kind of deals are you seeing? I had deals that took five years, from the time they started talking, to the time they opened.

Q: What is attracting large retailers to Las Vegas now?

A: What we’re seeing overall in the market: We have population growth again; we’ve got the improvement in the job market. We just had new unemployment numbers come out, and we have more jobs than we did before the recession. Think about the fact that we still have not recovered all those construction jobs that we lost. That says a lot as to how our market has evolved, how there’s more diversification, how it’s probably a safer market now.

Q: How long have you been a part of CALV?

A: This will be my fourth year on the board. Every year, things are growing and getting better. As of today, we’re up to 408 members.

Q: What are some of the positives you find in CALV?

A: One of the things that I’ve found to be the most valuable is its work in government affairs and the fact that we work with the Greater Las Vegas Association of Realtors. We have the power of the GLVAR behind us. They’re one of the most powerful groups in the nation. We work with them and we work with NAIOP. We work with all these organizations to protect our industry, protect personal property rights in the commercial real estate world … .

Q: Can you tell me about Las Vegas’ business license fee for commercial property landlords?

A: The city of Las Vegas is trying to have a license fee based on gross rents.

A: That’s a huge thing that we worked on this year; it has been a huge focus of our discussions in all of our board meetings. We’ve had people out there in meetings with the city and the mayor, and they’ve been working extensively to help the situation so that our clients and our industry aren’t affected in a negative way and to come to a compromise with the city.

A: We want to grow membership, and I’d like to see people get more involved and get a better understanding of what the benefits of being a member of Commercial Alliance are.