Skip to content
Sign up for our newsletter
section-ads_high_impact_1
By Stephanie Annis Special to the Las Vegas Business Press
September 23, 2015 - 6:19 am 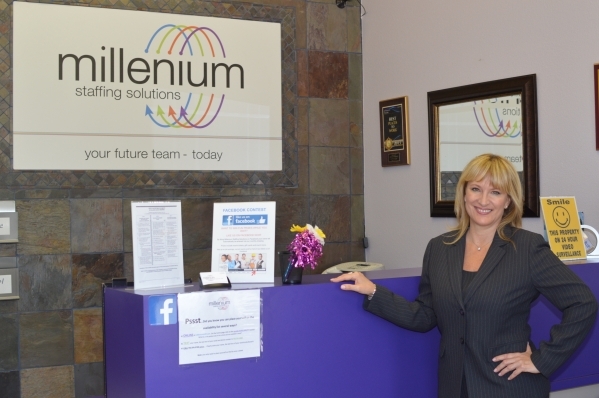 Jennifer DeHaven, president and CEO of Millennium Staffing, says the Las Vegas job market is stabilizing and demand for certain fields is strong. But salary levels need to come up if the area is going to keep the best talent.

DeHaven received her education from the Kelly School of Business at Indiana University, where she majored in marketing. She has a master’s degree from George Washington University. DeHaven has been in the staffing industry for 20 years

Q. How has the staffing market changed since the recession?

A. The industry as a whole has shifted, especially in the last two years. Even though companies are demanding talent, at the same time, in positions they don’t have to hire full time for, they will contract out. Thus the temp industry and temp-to-hire is extremely strong right now. A lot of that is just because of the increased cost to have employees.

I find that the staffing industry overall is providing a flexible solution for companies in every industry. Simply because as demand is increasing they can increase their staff and as it’s decreasing, they can also decrease staff without it hurting their particular unemployment costs.

Q. Have you seen a lot more companies leaning toward keeping more permanent temp positions after the recession?

A. Well, I never use the word permanent, but yes. For a long time, no one really wanted to hire onto their payroll until the confidence in the economy started to strengthen, and now it’s a balance. It’s a balance due to the mix of individual industries cycles. Again, those highly skilled positions are getting snapped up quickly.

Q. What do think is most important for employers to know about the jobs data?

A. Las Vegas is now between 6.8 and 7 percent unemployment. Though that’s high comparatively to the U.S., our unemployment rate has been decreasing for over four years. So that’s good for us. Unfortunately, we’re still like number two worst unemployment in the country, but we’re improving. So, I see that all as very positive news. I think the confidence in the economy is growing, not only here locally but also nationally. So that’s of course naturally going to help bring down unemployment rates.

Q. What changes are you seeing in Las Vegas in the economic market?

A. Right before the recession, it was trying to find the talent to fill all the jobs in demand. Obviously, that took a nose dive in fourth quarter 2008. We didn’t really hit bottom here in Las Vegas until 2009. Since then, the last four and half years or so we’re steadily seeing unemployment rates drop. So, what I’m seeing in Las Vegas is that the demand is starting to come back to almost, not quite, pre-recession rates. We’re still trying to educate and understand that pay rates need to get to where demand is; so in other words we’re getting back to the point we need to start paying more for qualified positions if we’re going to retain talent in this state.

Q. Is the jobs market stable or is it still fluctuating?

Q. How much longer until we reach the point when everybody who wants a job has one?

A. That’s a difficult question. Anyone who wants a job and really is sharpening their skills to stay up with today’s demand for job skills, and certifications, and qualifications, is going to be able to get a job. We’re still not 100 percent there; we still have room. We’re getting to that sweet point. The qualification point is anyone who really wants a job.

Q. What do you view as the most important information about the current jobs market for business owners?

A. We need to match our salaries to the skill levels. When the recession hit, you were able to get a lot of value for the dollar. The demand for qualified positions, we have to keep up with the salary and perks that are needed, again to retain the talent in the state. Some of the hot (jobs/industries) — construction obviously booming and that’s both new and refurbishing. Thus the mortgage industry is doing really well. Can’t find enough qualified mortgage people. Accounting, again, doing well. Just trying to find the skilled talent for the accounting and financial demands is a challenge. Manufacturing, just trying to find good industrial engineers is really difficult; and any skill within manufacturing, that’s just an example. It’s again, all on an uptick here.