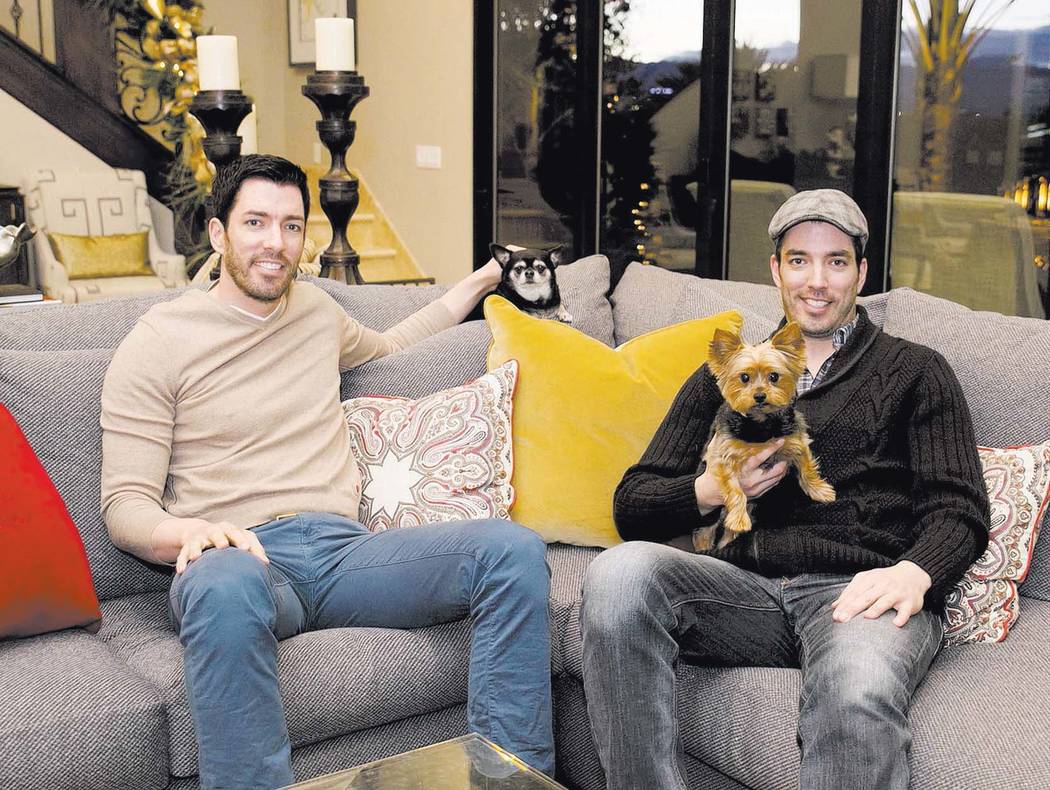 Jonathan and Drew Scott, who star on the HGTV's "Property Brothers," in their Las Vegas home during a 2015 interview with Real Estate Millions. (Tonya Harvey Las Vegas Business Press)

Property Brothers Drew and Jonathan Scott are searching the Las Vegas Valley for homes that are diamonds in the rough: beloved properties with good bones the brothers can transform into the homeowner’s “forever home.”

“I think ‘Forever Home’ has more heart,” Jonathan Scott said of the Brothers new HGTV series “Property Brothers: Forever Home.” “Because we’re finding out why somebody fell in love with their home.”

“Property Brothers: Forever Home” currently has a casting call out for 20 homeowners in the Las Vegas area. The show, inspired by viewer requests, focuses on renovations that allow the homeowner to convert their existing house into a forever home.

“We want people who are invested,” Jonathan Scott said. “This is a real renovation with real people.”

Each renovation is designed and conducted by Jonathan, Drew and their team of experts. Working with local general contractors, each project comes with a warranty once the home is completed.

“We try and take the stress off the shoulders of the homeowners,” Jonathan Scott said. “It’s important for us to make sure people realize we’re not just some fly-by-night company. We literally want to create a forever home they can stay in for the rest of their lives.”

Each accelerated five- to seven-week project will be showcased on an episode of “Property Brothers: Forever Home.”

The show launched this year on HGTV. It has Drew returning to his roots — getting his hands dirty — assisting his brother, Jonathan, and the team in the renovation.

“The exciting thing is I got Drew to do the work,” Jonathan Scott said. “So he’s in there with me renovating, demoing. He’s doing stuff.”

In each episode, Drew Scott also tours existing homes with homeowners to gain inspiration for their renovation.

Eligibility for the show requires participants to own their home in the Las Vegas area, have a renovation budget of at least $90,000 and be willing to move out of the home during the renovation.

Participation in the program also requires owners to be available for approximately seven days of filming staggered throughout the renovation. Due to tight time constraints, renovations are limited to the existing space, meaning the show will not take on any additions or extensions of the property.

She said the Vegas episodes will start airing in September.

“Renovations are stressful and costly, and that’s when everything is going well,” Sayami said. “With the Brothers and their team on the job, you know your home, budget and timeline are in the best hands.”

The Brothers are finishing up projects in Toronto.

“We filmed in Vegas for the first four months of this year,” Jonathan Scott said. “It was probably one of the best seasons we’ve done.”

A highlight from the show’s first season was the Scott Brothers’ home renovation for their brother, JD, and his then-fiancé, now wife, Annalee. They transformed their midcentury, modern Las Vegas abode with a budget of $130,000.

“Giving them their dream home was a big thing for us,” Drew Scott said.

Anyone interested in transforming their home can visit propertybrothers.com and fill out the application. The application deadline is February.

“Submit your application,” Drew Scott said to those interested. “And maybe we’ll be hanging out in the new year.”