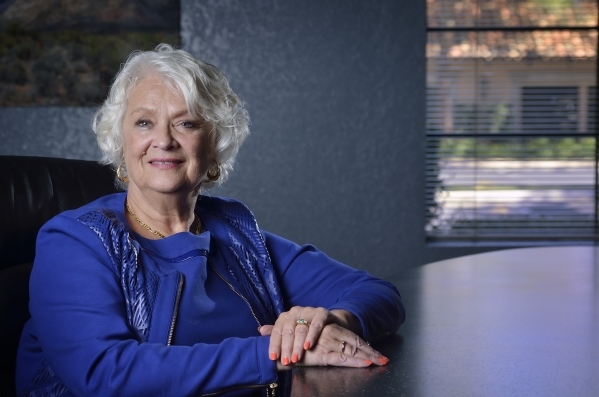 Mary Lau, president and CEO of the Retail Association of Nevada, is shown at the organizationÃ­s offices at 175 E. Reno Ave. in Las Vegas on Friday, Sept. 18, 2015. Bill Hughes/Las Vegas Review-Journal

When Mary Lau joined the Retail Association of Nevada’s board of directors nearly 30 years ago, she had no idea how that decision would impact her professional career.

Lau, who studied microbiology as an undergraduate at Sierra Nevada College in Incline Village, originally entered the world of gaming, serving as president of Nevada Check and Credit Card Investigators. That was a loss prevention agency that works with the police to keep track of bad checks and scam artists in sectors of retail, grocery stores and gaming.

Pete Kelly, former executive director of the Retail Association of Nevada, approached Lau in 2005 about whether she would like to take over following his retirement.

“Pete was an amazing man and the more I worked with him, the more I admired what he was doing,” she said. “He did an amazing job for retailers in Nevada, but he wasn’t one for building an organization, so I had the opportunity to build a company.”

In January 2006, Lau became president of the association, which ensures the livelihood of businesses across Nevada.

“We’re in charge of looking out for businesses, and each one of our members focuses on the highest and best good,” she said. “Our members think 10 to 20 years out, not tomorrow.”

Lau said the Retail Association lobbies on everything that impacts the business community at the state legislative sessions.

“Anything that affects the business community, affects retail,” she said. “About 1,200 bills are introduced each session, and we lobbied on 900 this past session.”

The Retail Association of Nevada boasts 1,600 members in Nevada, Lau said, and its history dates back to the 1960s when Sears and J.C. Penney decided to break down their state by state representation.

“(Sears and J.C. Penney) approached Pete Kelly and asked if he could put together a membership organization that represents retail,” Lau said. “The organization is different from chambers because they can’t focus on one segment of the industry. We’re strictly retail and organized for that purpose.”

Bryan Wachter, director of public and government affairs for the Retail Association of Nevada, said retail is a vital part of Nevada’s economy, as one in seven Nevada residents work in retail.

“Retail, which makes a vital impact through sales tax, commands a large piece of the pie when it comes to Nevada’s economy,” he said. “Everyone thinks gaming and mining are the primary industries in our state when it’s actually gaming and retail.”

Since Lau took over the helm of the Retail Association of Nevada, she’s noticed the industry change drastically, however, she doesn’t think brick and mortar stores will vanish anytime soon.

“A lot is changing and as the environment changes, retail will always change,” she said. “You’ll always have brick-and-mortar retail because people are tactical. I could be naÃ¯ve, but retail reacts to needs and will always morph into what the customer wants.”

Lau added, “shopping is an experience and people will always stop by a store and grab something on their way home.”

The Retail Association of Nevada is in the midst of expanding into other areas to take on a larger administrative role with neighboring states.

“Some other states have expressed interest in receiving some assistance and because there are few other state-wide associations, we have the ability to do certain things,” she said. “We just want to continue to represent Nevada businesses in the retail sector as best as we can.”