Skip to content
Sign up for our newsletter
section-ads_high_impact_1
By JEFFREY MEEHAN SPECIAL TO LAS VEGAS BUSINESS PRESS
October 23, 2017 - 12:48 pm 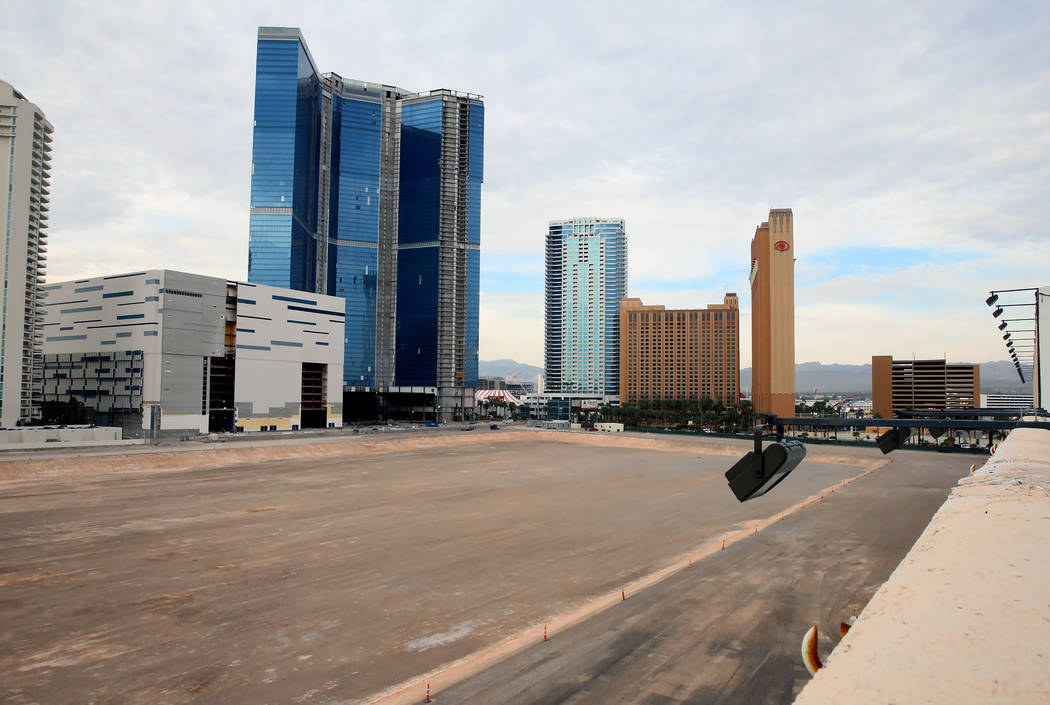 The construction site where ex-NBA player Jackie Robinson has proposed a big expansion for his arena and hotel project at the north lot on Las Vegas Boulevard, between SLS and Fontainebleau. (Bizuayehu Tesfaye Las Vegas Business Press)

The Strip could begin to experience a construction boom in the next several months, with a significant number of potential projects getting underway on the north end of the Strip.

The list of projects, some on the drawing board when the recession hit, includes hotels such as Fontainebleau and Resorts World Las Vegas. The Las Vegas Convention Center expansion is also on the table, with Phase Two up next, along with a megaproject that includes a stadium, hotel and conference center on the north end of the Strip.

“We’re going to have many billions of dollars in construction activity within the next six to nine months,” said Michael Parks, a member of CBRE’s Global Gaming Group.

Though not directly on the Strip, the Raiders’ stadium is also a significant project and is expected to be completed in time for the team to start playing in the 2020 season. The project could have an impact on the Strip economy in general.

Genting, the Malaysian company bringing the 3,000-room, $4 billion Resorts World project to life, announced its appointment of W.A. Richardson Builders as the construction manager on the 87-acre site. The estimated completion time on that project is late 2020.

In a press release, Edward Farrell, president of Resorts World Las Vegas, said that more than $400 million in contracts have been awarded to vendors.

The Resorts World project sits on the former site of the Echelon project, which came to a halt in 2008. The property was sold by Boyd Gaming to Genting in 2013 for $350 million.

Genting had an official groundbreaking in May 2015, and activity has been slow since.

Another project that’s been in the works is ex-NBA player Jackie Robinson’s arena on the site of the former Wet ‘n Wild water park, just south of the SLS Las Vegas.

Robinson began excavating the site around March, but nothing vertical has been built on the 27-acre site, which is pegged to see a 22,000-seat arena with a retractable roof, a hotel, a conference center and other offerings.

The arena project, then dubbed the All Net Arena and Resort, was announced at the end of 2013 with 300,000 square feet of retail and restaurant space and a 500-room hotel. Its estimated cost was $1.3 billion.

On Oct. 18, Robinson gained approval from the Clark County Commission on expanded plans for the site that equate to $2.7 billion, more than double the original.

Some of the expanded plans include a 63-story, 2,000-room hotel, a 240,000-square-foot conference center and other amenities.

On the day of the county meeting, Oct. 18, the Las Vegas Review-Journal quoted Robinson as saying that the financing is “signed, done, sealed, delivered.” Robinson also said he expects the project to be delivered by spring 2020.

Work on Phase Two of the convention center is set to begin in 2018, Parks said.

The potential for extra traffic in Las Vegas will only add to the bustle of conventions the city already has.

“It’s because we bring in the convention business during that week that our occupancy rates remain near record levels, much higher that national averages,” said Mike Mixer, executive managing director and co-founder of Colliers International Las Vegas.

Visitation numbers, in general, have been on the rise over the past couple of years.

Las Vegas set records for the past couple of years in visitation numbers but is just shy of being on track for another visitation record in 2017, Mixer said.

Analysts who track the finances of Las Vegas casino companies are expecting a short-term dip in visitation in response to the Oct. 1 mass shooting at the Route 91 Harvest festival, where 58 people were killed and hundreds injured.

Parks said he didn’t think the shooting would have an “adverse effect on new building or development in the Las Vegas resort corridor.”

Also potentially in play is the Fontainebleau.

The building sold to investment firms Witkoff and New Valley in August for $600 million, but they have yet to announce plans for the site, which also came to a halt in the recession.

Billionaire Carl Icahn purchased the property out of bankruptcy during the recession for $150 million.

The steel structure is still in good shape, as Icahn paid for the upkeep over the last several years, Parks said.

The property on the site of the Alon project, which Australia-based Crown Resorts pulled out of last year, is another big-ticket item still up for grabs on the Strip. Parks said it’s on the market for $400 million.

There could be new construction activity around the Strip, as Caesars emerged from Chapter 11 bankruptcy in October.

The company is looking at several acres it owns in the Strip area: 7 acres in front of Caesars Palace and 40 acres the company holds east of Bally’s and Paris Las Vegas.

Caesars has already started nearly $100 million in projects across the Flamingo, Harrah’s and The Cromwell.

The planned-65,000-seat, $1.9 billion Raiders’ stadium at Russell Road and Polaris Avenue, which sits just west of Interstate 15, is expected to be ready in time for the 2020 season of the NFL.

The stadium project is expected to break ground in November, though it’s not been formally announced.

Just the knowledge of where the stadium is going to be has led to a bump in land sales in the surrounding area.

A property that was once home to Southwest Gas Corp.’s corporate office and servicing facility drew $18.5 million, or $1.25 million per acre, said Ray Germain, first vice president investments at Marcus & Millichap’s Las Vegas office, who announced the deal in early October. That’s more than 30 percent higher than was being asked for about two-and-a-half years ago.

“I think that’s a great sign of things to come, and investors are more confident in infill Las Vegas,” said Germain, who represented the seller of a 14.8-acre site at 4300 W. Tropicana Ave., adjacent to The Orleans and just over a mile from the Raiders’ stadium site.

The West Tropicana property, which was being used for an industrial space by Southwest Gas, is likely not going to be used for that in the future. The property does sit in a zoning region that allows for high-density, mixed-use developments, with unlimited height restrictions, according to a release from Marcus & Millichap.

“From the sounds of it, they’d like to do a mixed use, possibly hospitality and retail concept of some sort,” Germain said.

That allows for the higher price on the property to pencil out, he said.

“To develop a high-rise or a hotel or a mixed-use concept, it makes a lot more sense,” Germain added. “If you go vertical, you’re going to get a lot more square footage. Paying a little bit more for the land makes sense in that scenario.”

A 2.5-acre parcel in the area also went for a premium. The parcel, which sits just north of the Raiders’ site on Hacienda Avenue, was acquired by Global Trust Group for roughly $2.9 million an acre in August, with a total price of $7.25 million — about four times what Doherty quoted as the average industrial parcel in the region.

Brenden Graves, director of client sales and services for the Las Vegas market at Xceligent, said the smaller the parcel, the higher the premium that a piece of land could go for.

“I thought it was encouraging to see the sale because I thought it was going to be kind of a land lock for a while until the stadium was actually was built, because right now you’re building for a potential,” Graves said.

That’s because the stadium’s completion is still a few years off. Prices will likely go higher as the completion date nears, he said.

Jay Heller, the 2017 NAIOP Southern Nevada president, said industrial properties, and others looking to sell their properties in the region, could take some time.

There’s a lot of factors that property owners will have to consider if they want to sell, according to Heller.

Loans may have some type of prepayment penalty, he said.

“It just depends on when those loans come due and the leases come due as well,” Heller said. “A landlord may not want to buy out a lease.”