Skip to content
Sign up for our newsletter
section-ads_high_impact_1
BY BUCK WARGO SPECIAL TO LAS VEGAS BUSINESS PRESS
January 14, 2019 - 1:44 pm 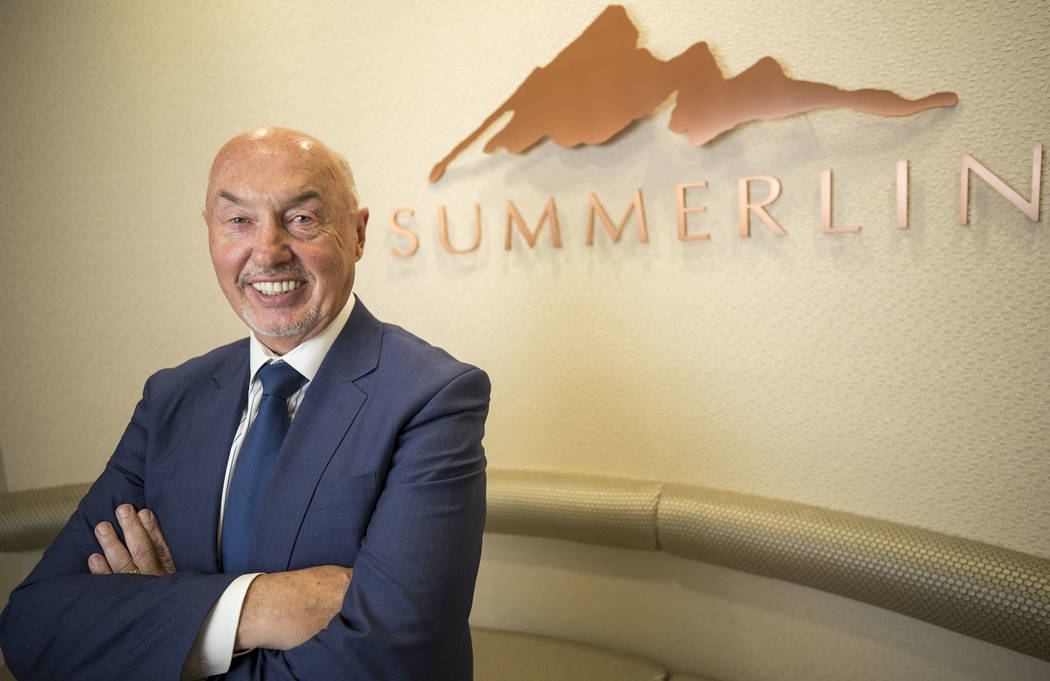 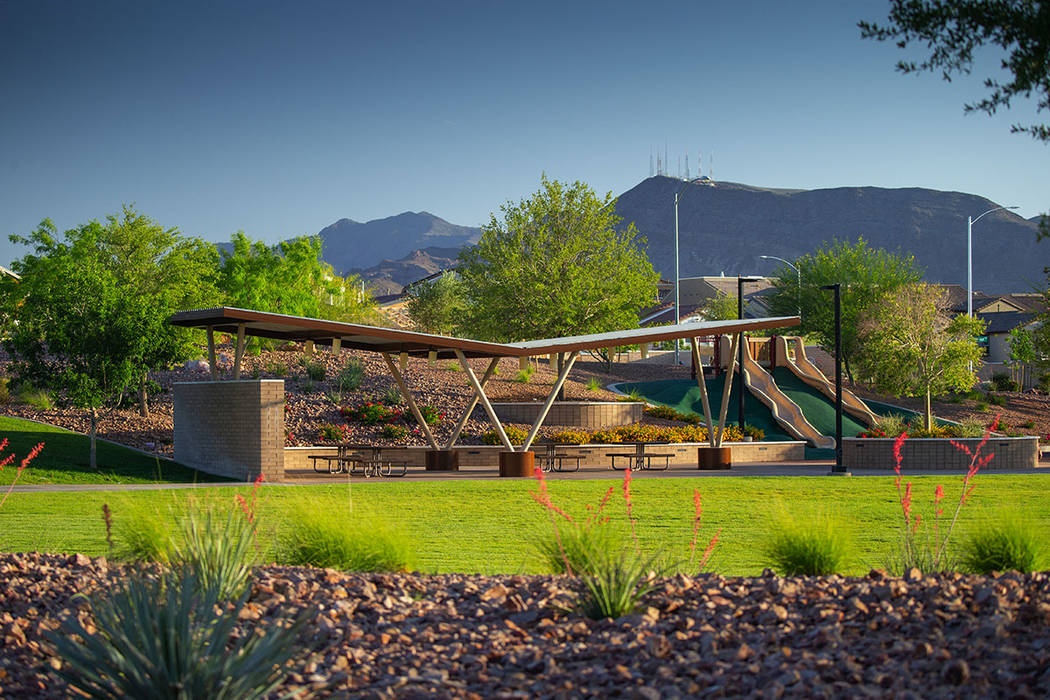 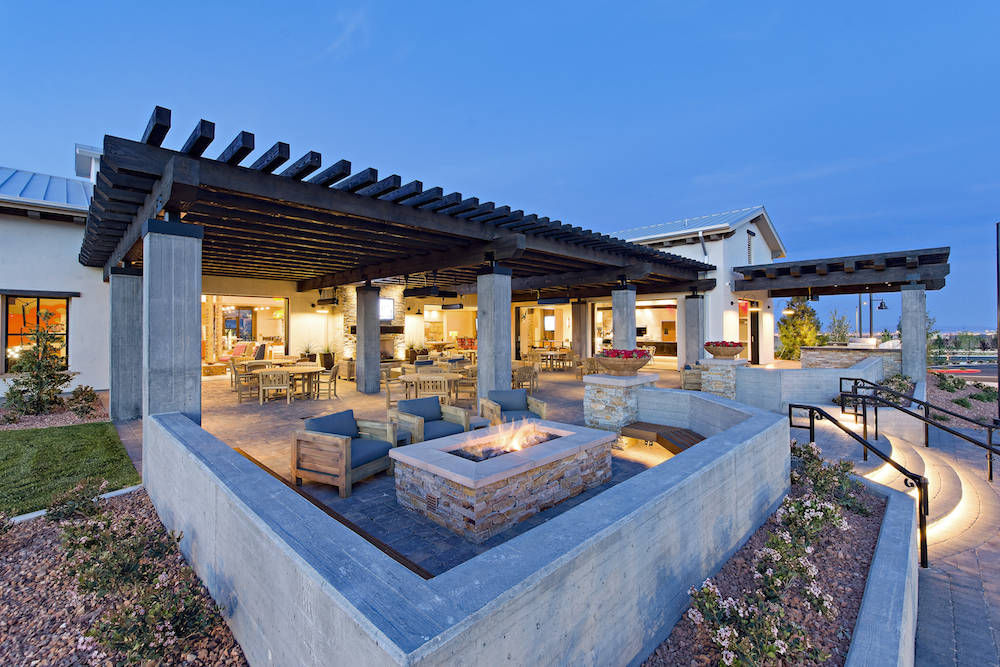 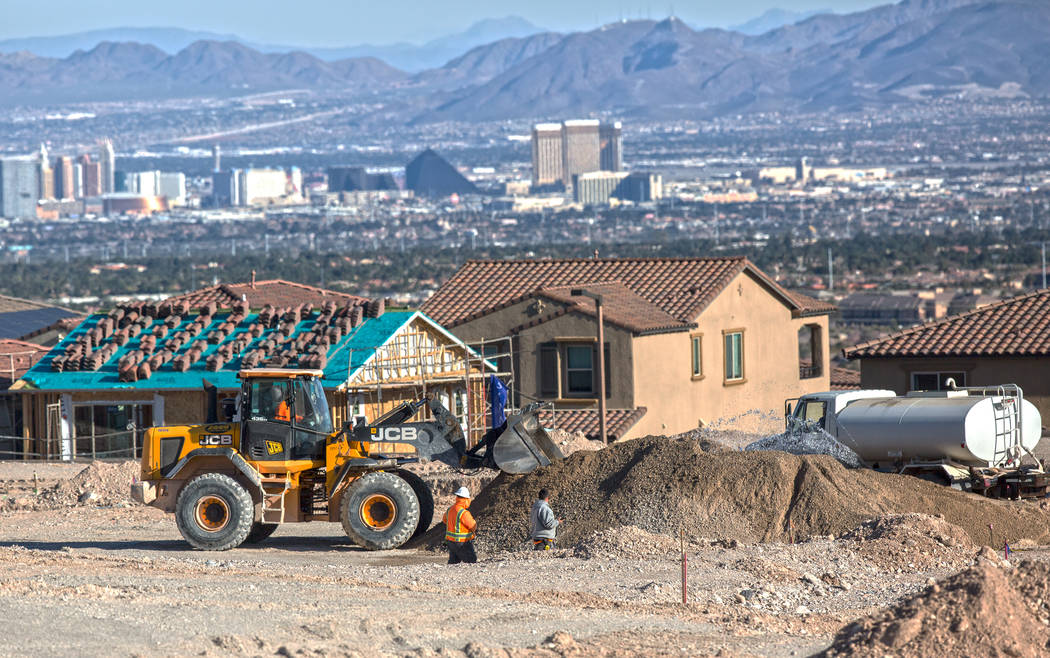 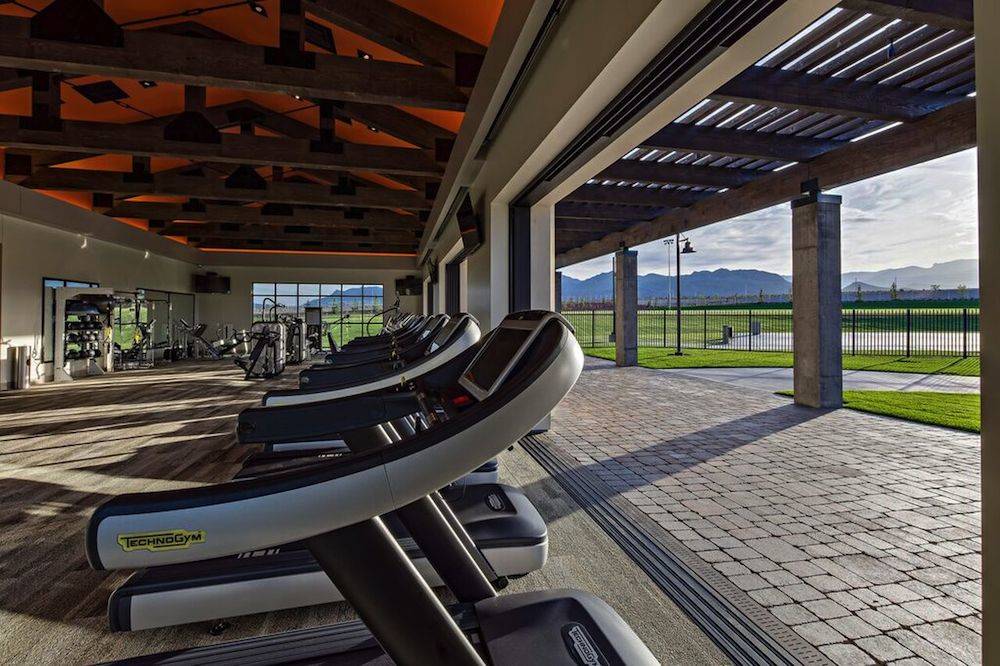 Skye Canyon features a clubhouse and a gym. (Skye Canyon) 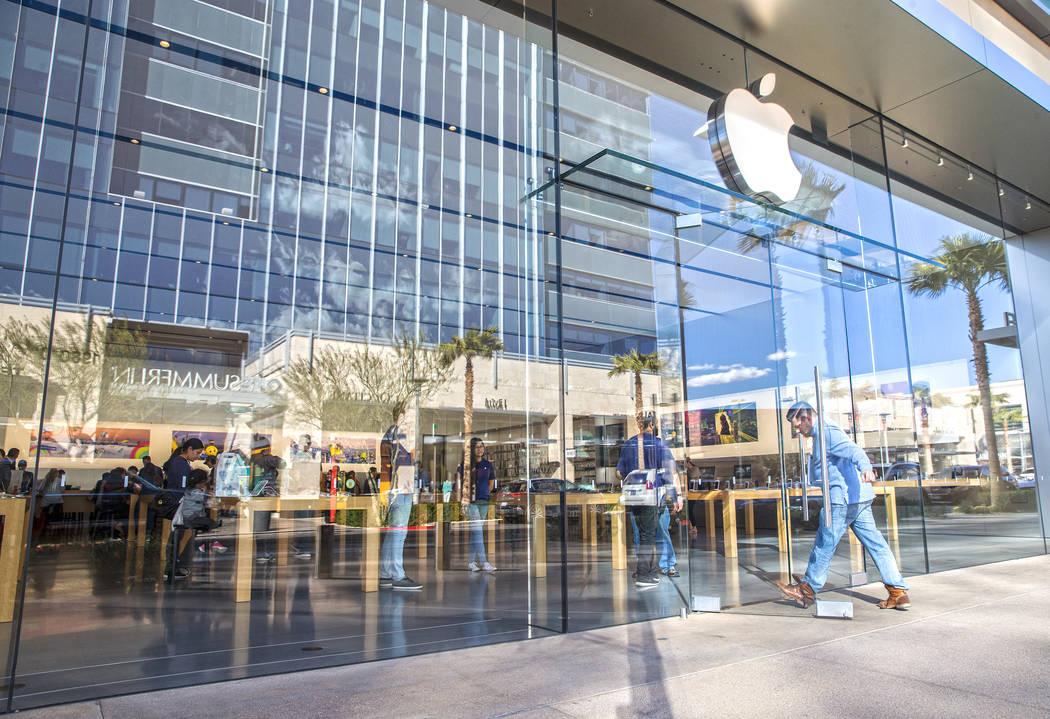 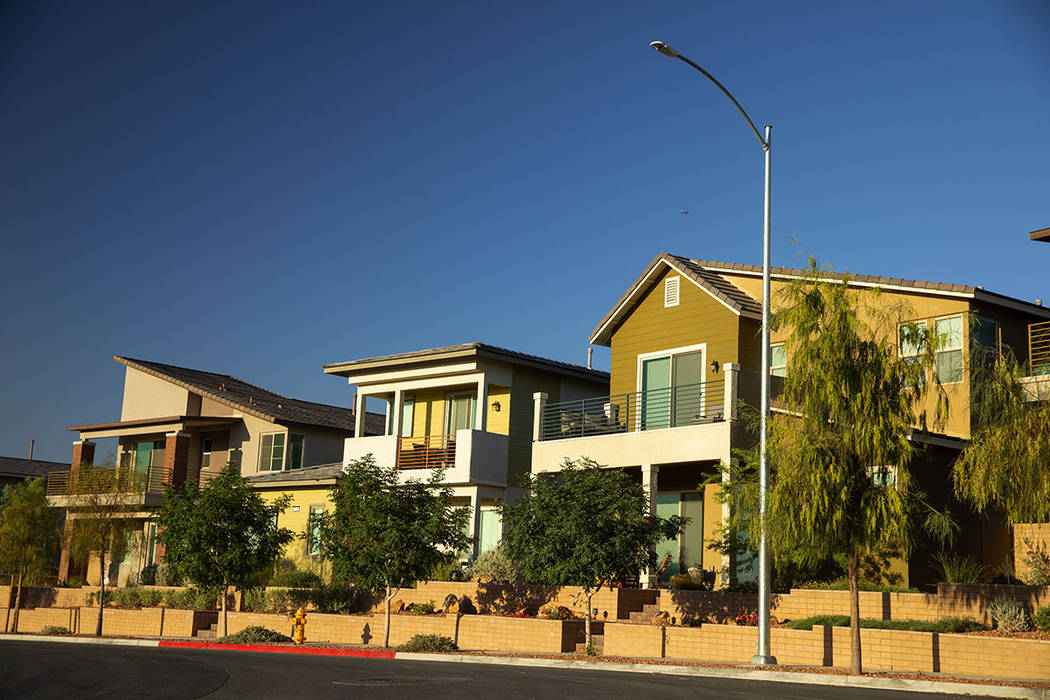 Las Vegas dominated the national scene for 2018 new-home sales in master-planned communities like it hasn’t done in more than a decade by placing four in the top 21, according to rankings released by two real estate consulting firms.

Though the number of overall home sales remains well below pre-recession levels and Las Vegas slowed in the second half of 2018, it’s the strongest showing as a group of master plans since before the Great Recession in the 2000s.

In 2018, Summerlin moved from fourth to third. Inspirada in west Henderson dropped one spot to ninth. Cadence in east Henderson rose from 23rd to 19th. Skye Canyon in the northwest valley jumped from 50th to 21st.

It’s the most dominant showing of Southern Nevada in the national master plan rankings since 2007 before the Great Recession when Mountain’s Edge was No. 1, Providence was No. 5 and Summerlin was No. 8, according to historical numbers from RCLCO. John Burns Real Estate Consulting also provided rankings.

In 2004 — one of the most dominant ever in the national rankings for Las Vegas builders — Southern Highlands ranked fourth; Summerlin, fifth; and Aliante in North Las Vegas sixth. Sun City Anthem was eighth.

Overall, new home sales were strong in Las Vegas in 2018, up 15.5 percent through the end of November, according to Home Builders Research.

They were even stronger in Summerlin with 1,318 sales, up 25 percent over the 1,052 in 2017, according to the real estate firms, which get the data from the master-plan developers.

Cadence rose 5 percent from 456 to 481, while Skye Canyon recorded the largest percentage increase of any master plan in the top 50 by gaining 52 percent from 315 to 478. It was two sales away from being in the top 20.

Las Vegas has always been a city that has embraced the master plans, according to Ken Perlman, a principal with John Burns Consulting, which follows the Southern Nevada market. During the downturn, a lot of development, including in master plans, stopped because of how challenging the market was, he added.

“It shows the Las Vegas market is back and has recovered,” Perlman said. “It shows us that Las Vegas is not just a community anymore where builders plunk houses on the ground and homebuyers buy them. It shows us Las Vegas is a community of sophisticated developers who understand what the consumer wants and are taking a lot of time and thought to implement them. Las Vegas is not just a second-tier market anymore where people go for affordability … it’s a market people want to go for lifestyle and quality of homes. Developers are recognizing you have to produce a community in order to be able to sell houses.”

After Las Vegas’ four master-planned communities in the top 21, California’s Orange County has three, Phoenix has three, and Houston has two. There are five in Florida, but they’re spread throughout the state. The Villages in Florida is ranked No. 1 in the nation with 2,134 sales, a 4 percent decline over 2017.

Texas, Florida and California account for 68 percent of total sales among the 50 top-selling communities, with the share of total sales in other states remaining at about 32 percent since 2017, according to RCLCO.

Florida continues to dominate the top five of the list, with The Villages, Lakewood Ranch and West Villages ranked No. 1, No. 2 and No. 5, respectively. Lakewood Ranch in Sarasota had 1,482 sales, some 164 more than Summerlin.

“To have four in the top 21 is an incredible feat,” Perlman said. “What that tells you is the developers have been able to create really great master-planned communities. They are thinking through the product they are building today, and they’re giving people what they want in health, wellness and social interaction and access.

Perlman said Summerlin “represents the high-water mark” for homes in Las Vegas, and it has everything a buyer wants in a master plan: starter homes for families, move-down product, access to amenities and community gathering spaces. Downtown Summerlin has evolved into an epicenter for food, retail and entertainment, he said. And there’s a strong active-adult component, he added.

“When you look at what master-plan community buyers want, today, it’s interactive spaces, social spaces, food and entertainment,” Perlman said. “Summerlin does that in spades. It’s been fun to watch what Summerlin has become. (It’s) not just one of the best master plans in Las Vegas, but anywhere the country. It’s one of the master plans people on a national level know and recognize.”

Perlman said Inspirada “does a lot of that, too,” and it shows that families want amenities and a great location. It has great parks, a farmers market, yoga classes, health and wellness, he said.

“It’s that same theme of community interaction, health, wellness and socialization,” Perlman said. “Summerlin is doing it. Inspirada is doing it. Cadence is doing it. Skye Canyon is doing it. That’s one of the reasons they have been successful.

In its report, RCLCO, said new-home sales in Las Vegas have “performed exceptionally well” because of a lack of resupply in the area. It cited significant price increases with November recording the fifth consecutive month of double-digit price increases year-over-year.

Gregg Logan, the managing director of RCLCO, said Las Vegas placing four in the top 21 is impressive though it had a slowdown in the second half of the year.

“We were all a little worried, and the market was showing some signs of cooling off a little bit over the summertime,” Logan said. “What it tells us is even if the market has moderated a little bit, master-planned communities are still seen as a more desirable place to be. I think you always see even more of a flight to quality. We’re not in a downturn, but as the market slowed down, it seems the master-planned communities experienced that a lot less. Their buyers are attracted to having recreational and social amenities in addition to nice houses.”

Logan said the concern about Las Vegas is affordability, though consumers are willing to pay a premium to be in a master plan for the amenities. Some of the other nation’s markets, more so than Las Vegas, seem to have a bigger problem with affordability with rising interest rates and rising home prices, he said.

“The Vegas master plans aren’t inexpensive, but they deliver a good value, and the consumer sees that price value relationship,” Logan said. “The builders have a good job of a segmentation strategy where they are offering product to a range of homebuyers and not just the high-end.”

Logan said he expects 2019 to be similar to 2018, and he is not anticipating any dramatic slowdown. Prices have been creeping up, but consumer confidence in Las Vegas is good, he said.

“Communities will do as well as they did in good (times), but it will be hard to dramatically exceed what happened in 2018,” Logan said. “There’s a likelihood they will maintain close to the 2018 pace.”

Perlman said he’s optimistic about where home sales will end up, but the potential for rising interest rates and concerns about affordability are factors.

“The pace of employment growth may slow down a little bit because it’s hard to grow the economy at the same pace when everybody has a job. The biggest thing for Las Vegas is just like it is for many markets in the country. The biggest key for Las Vegas is affordability. There is very little risk with oversupply. There’s not too much inventory. Demand is still pretty good, but the challenge is affordability.”

The Burns Affordability Index has Las Vegas at an 8.6 out of 10 and with home prices going up, Perlman said. The biggest challenge for Las Vegas is to continue to produce great homes at prices people can afford.

One of the ways you create affordability is by building different product: smaller homes, higher density homes, product with indoor and outdoor spaces, Perlman said. And what helps buyers offset a smaller home or higher-density home or smaller lot is the ability to interact with their community and have great community space, he said.

“That’s why Summerlin, Inspirada, Cadence and Skye Canyon are doing so well,” Perlman said. “There are builders building great higher-density product in Las Vegas that are good looking, more attainably priced and doing so within the constructs of these master plans where buyers are saying they’re OK with a little bit of small home. ‘I still have the price I can afford and all of these cool amenities that are associated with it in this great community.’ That is the trade-off the buyers are willing to make.”

Las Vegas is primed to handle what’s coming, Perlman said. Looking locally and nationally, there are two big buyer profiles coming through the pipeline: the young buyer buying the first home and move-down, active adult looking for lifestyle, he said.

“When you think about what communities are set up to capture those buyers, there is no place better place than Las Vegas for those buyers,” Perlman said. “When you look at some of the product being built out there for that active-adult buyer, I love what Toll Brothers is doing at Regency at Summerlin. I’m excited to see Shea evolve at Trilogy. Las Vegas is now starting to look at the new generation of move-down buyer. At the same time, that first-time buyer that’s looking for lifestyle and social interaction and affordable prices, those buyers have opportunities there, too. Inspirada, Cadence, Skye Canyon and even parts of Summerlin have product that speaks to those buyers perfectly.”