Skip to content
Sign up for our newsletter
section-ads_high_impact_1
BY BUCK WARGO LAS VEGAS BUSINESS PRESS
May 4, 2021 - 11:08 am 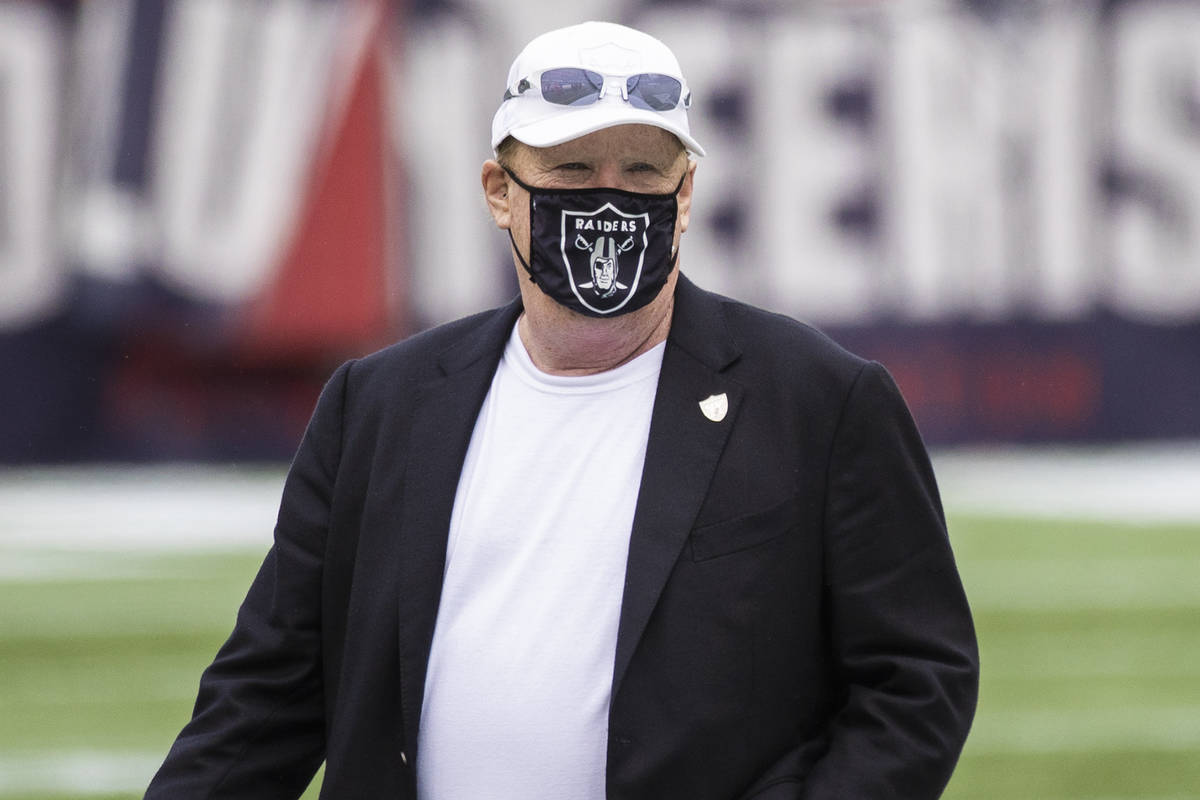 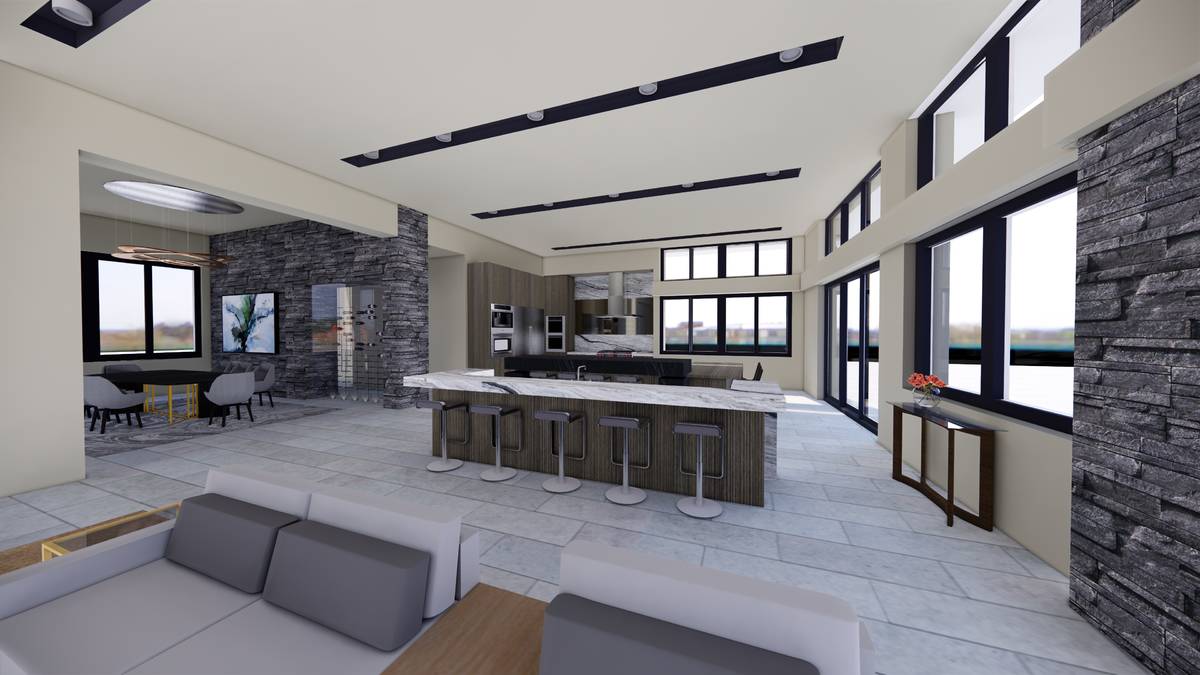 Luxurious Real Estate Luxury Realtor Bob Barnhart has a listing for a 8,800-square-foot home in The Ridges in Summerlin. The spec home has a price tag of $6.1-million. 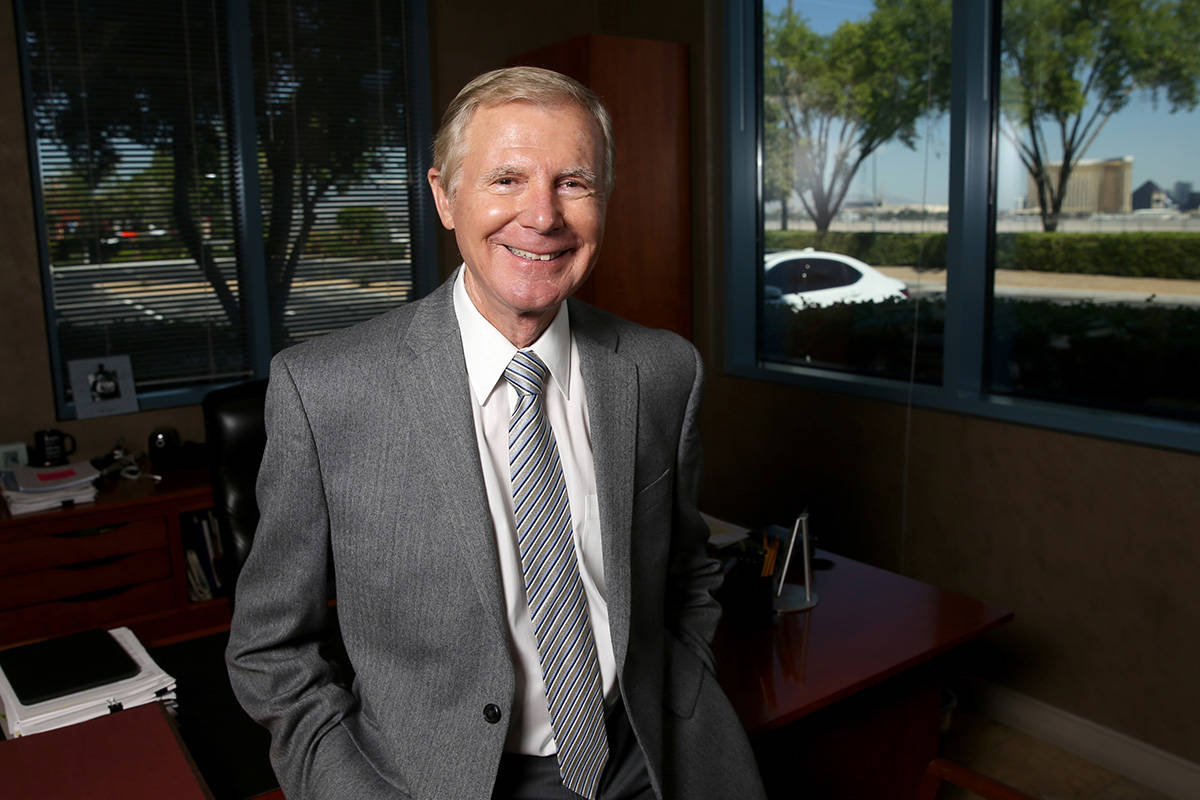 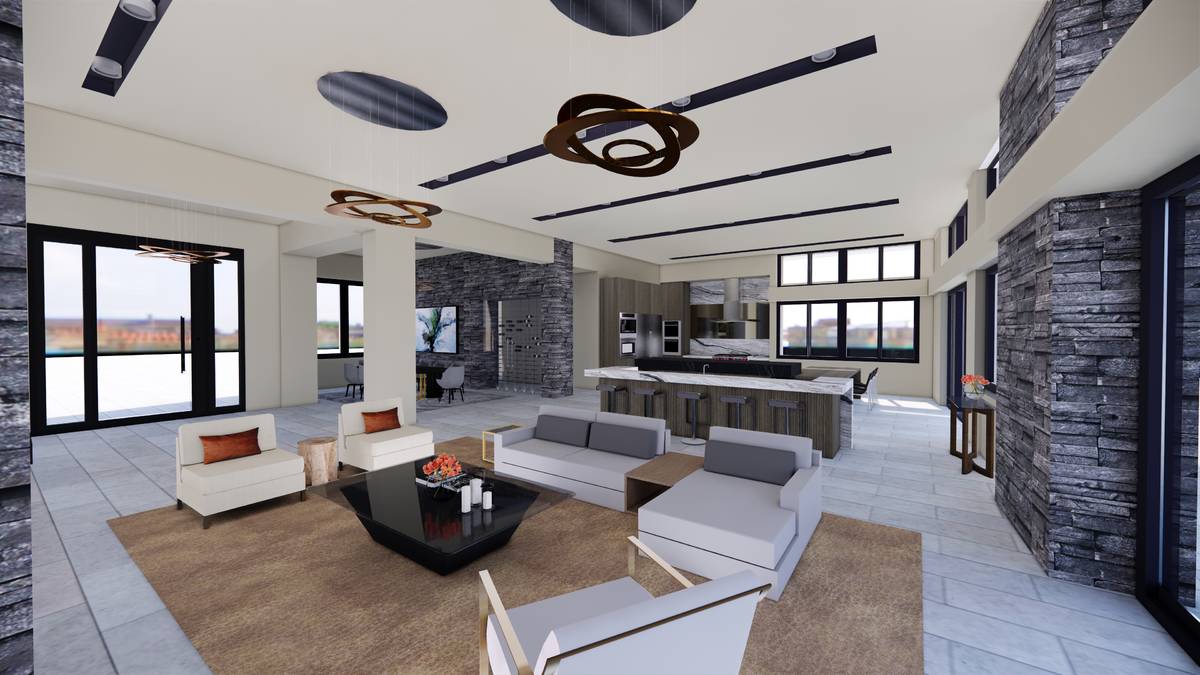 Luxurious Real Estate Luxury Realtor Bob Barnhart has a listing for a $6.1-million spec home under construction in The Ridges by Britim Inc. 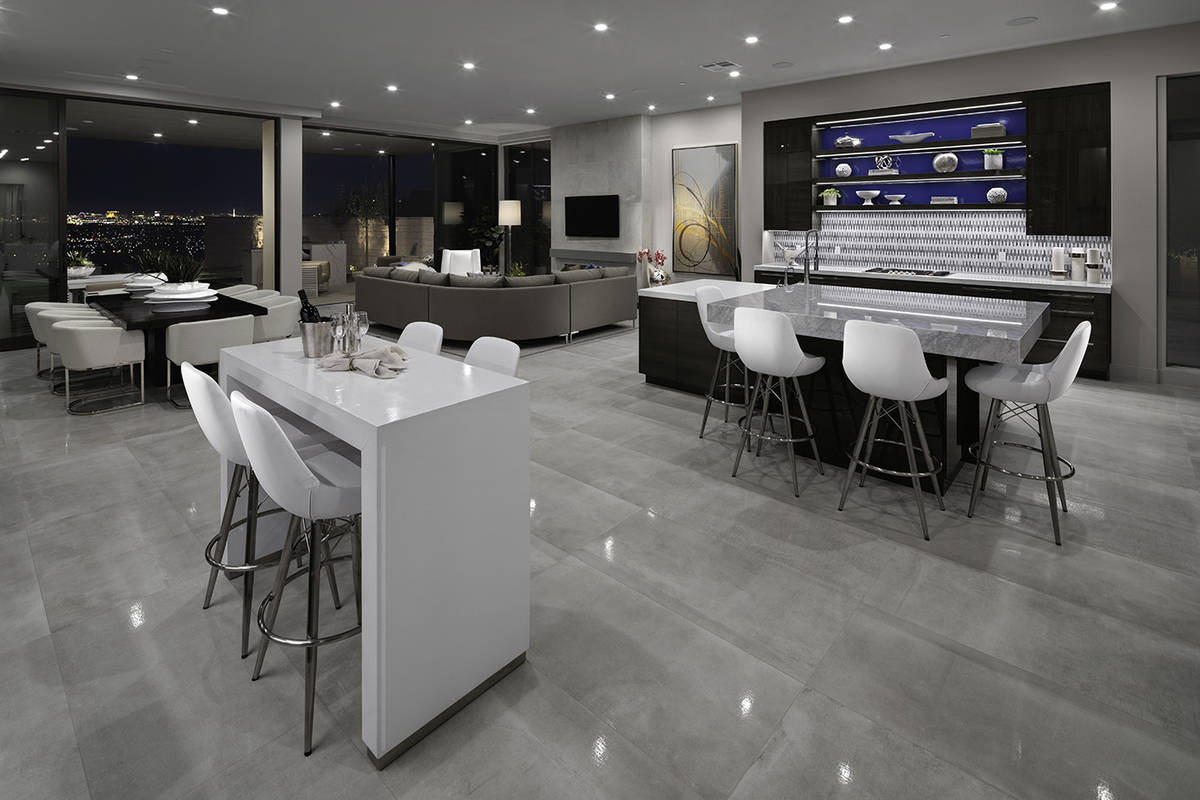 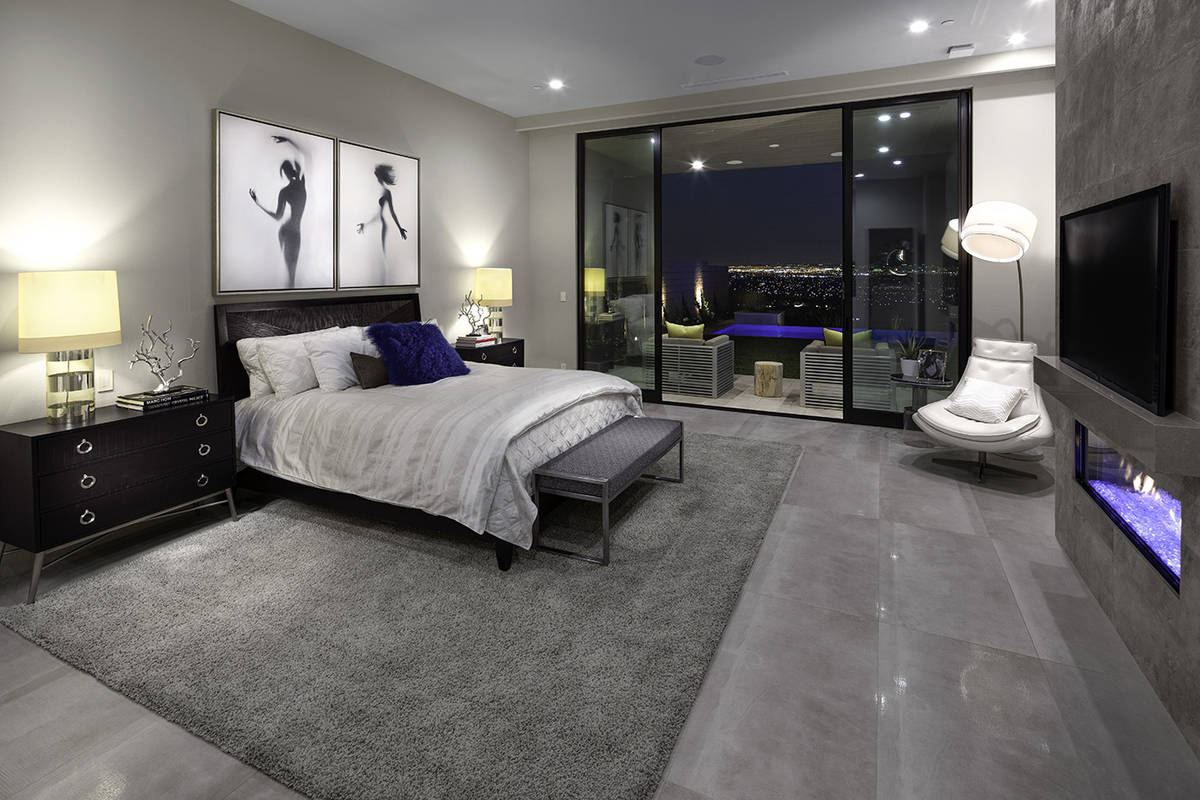 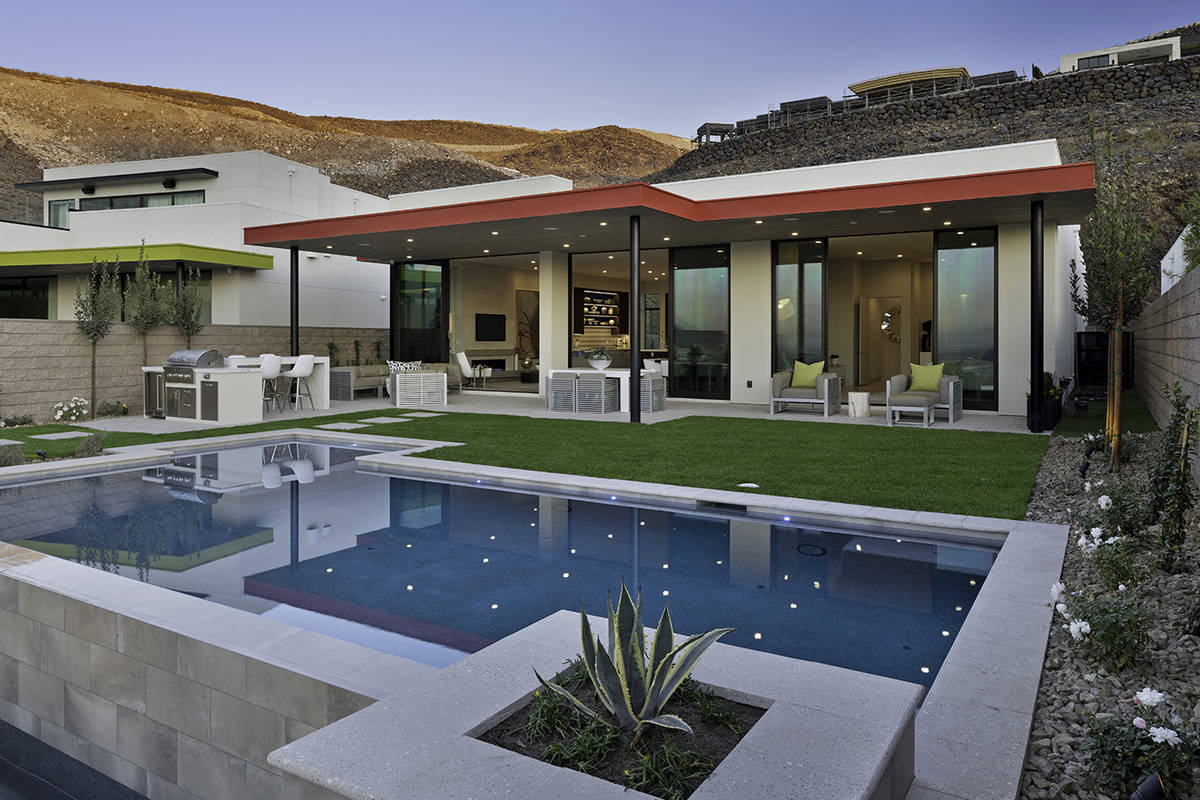 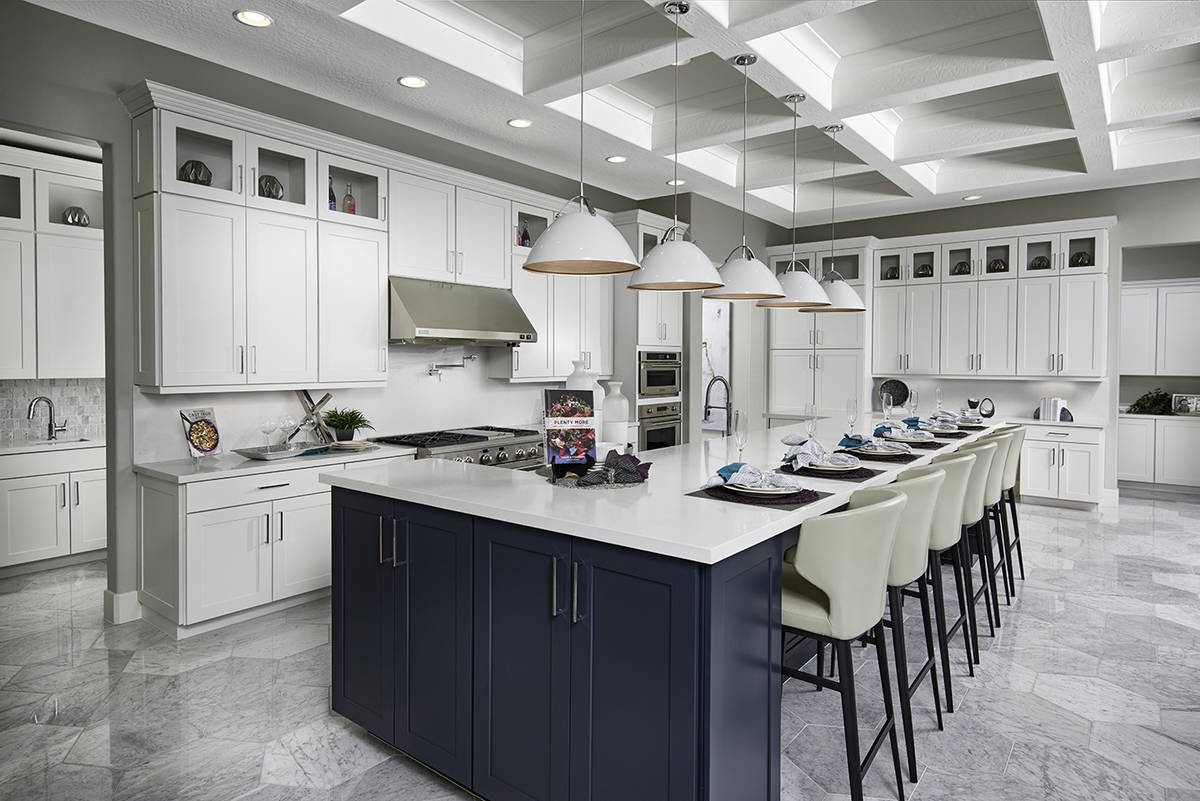 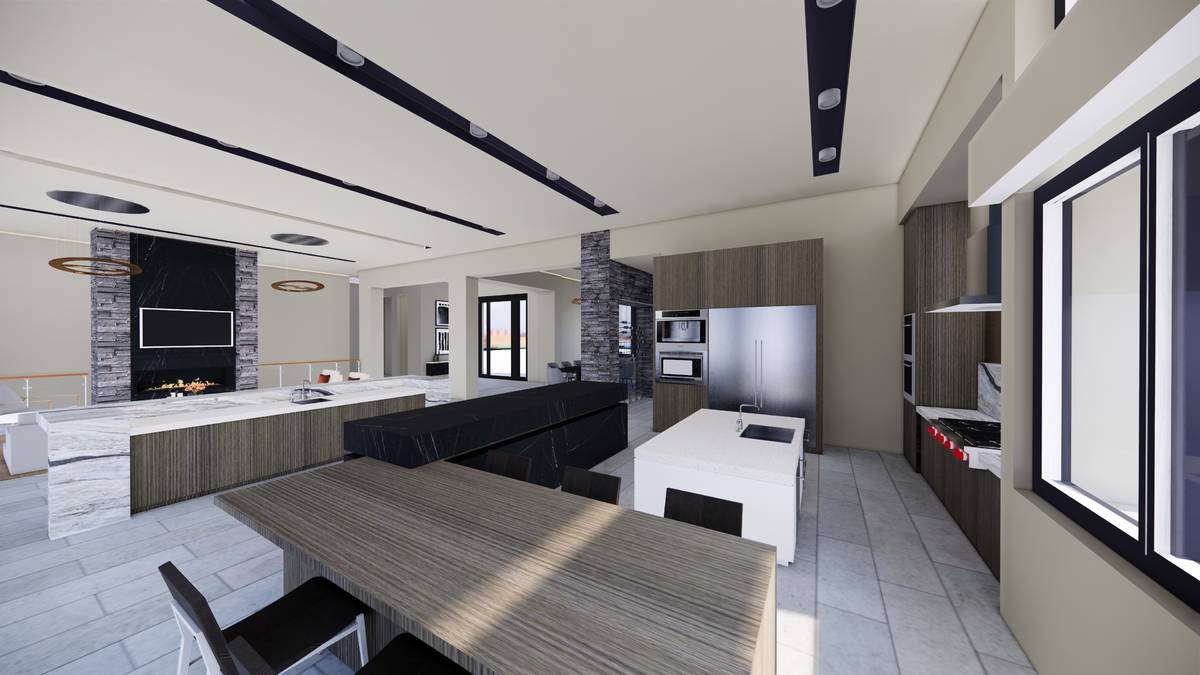 This spec home in The Ridges is listed for $6.1 million spec home under construction in The Ridges by Britim Inc. It measures more than 8,800 square feet. (Luxurious Real Estate) 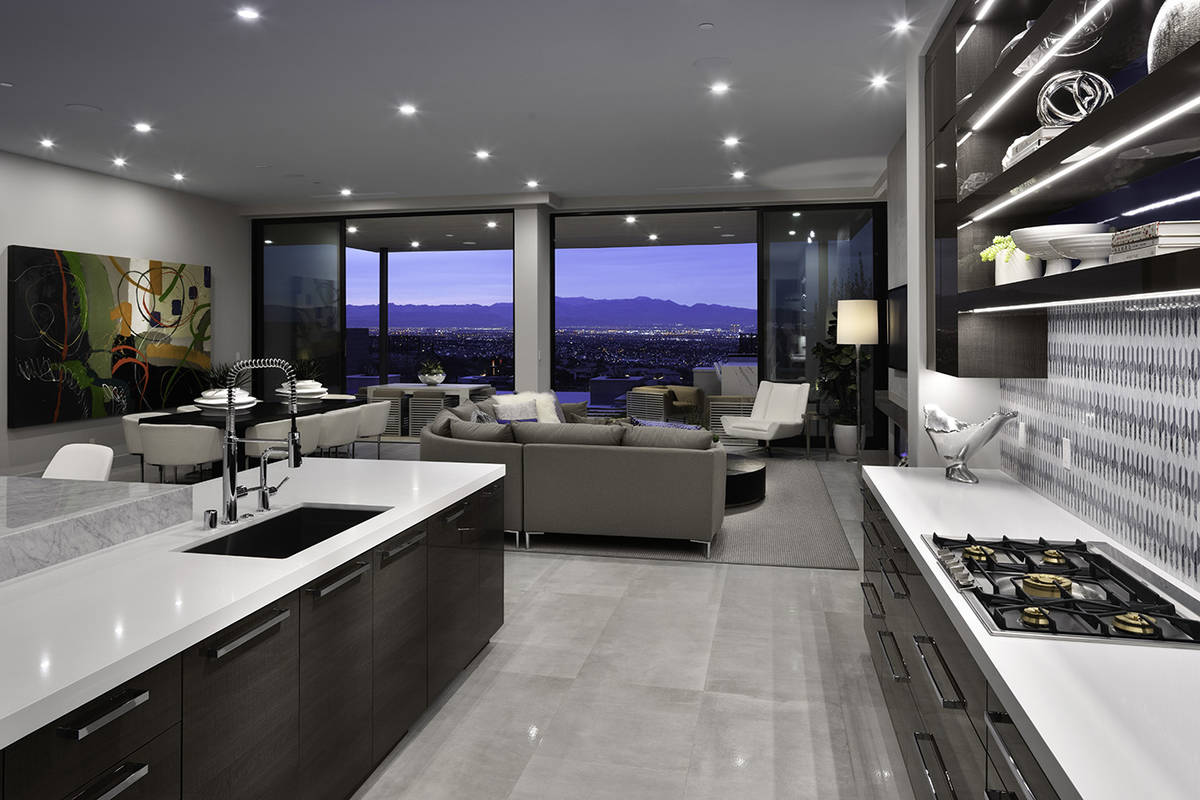 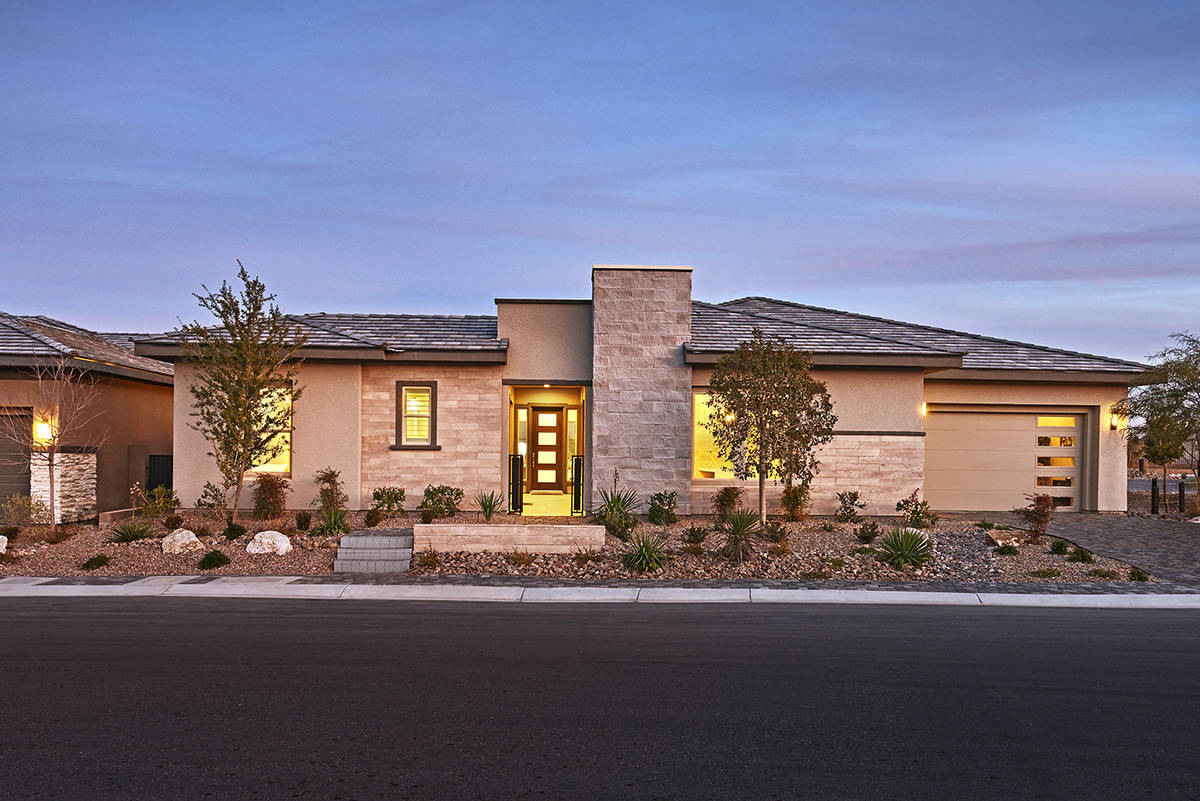 Steve Corbett, vice president of sales for Richmond American Homes, said they’ve sold through their luxury product rapidly and have only one community left with a high-end designation — Galway Grove in the southwest valley. It has sold out of two phases of 40 homes in the first quarter and hopes to release the third phase of eight lots in May and fourth phase of 24 lots this fall. Homes are built on half-acre lots and most homes close between $900,000 and $1 million. 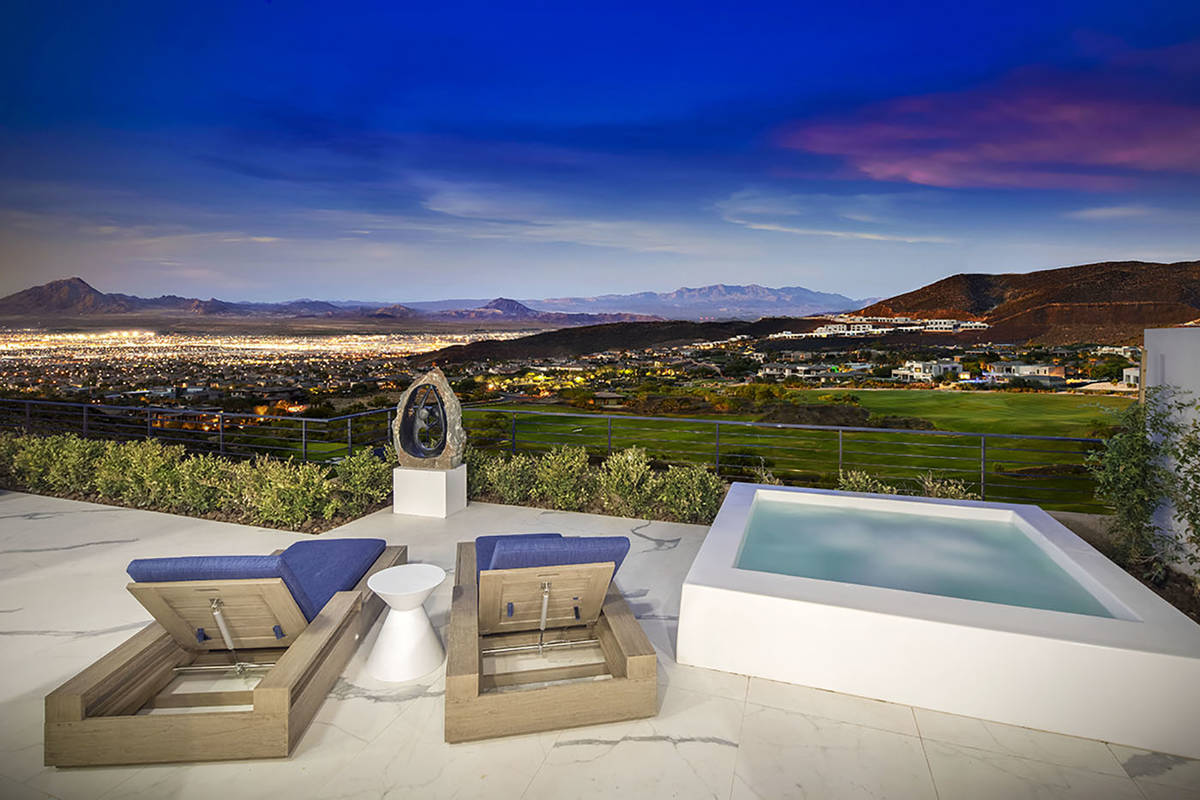 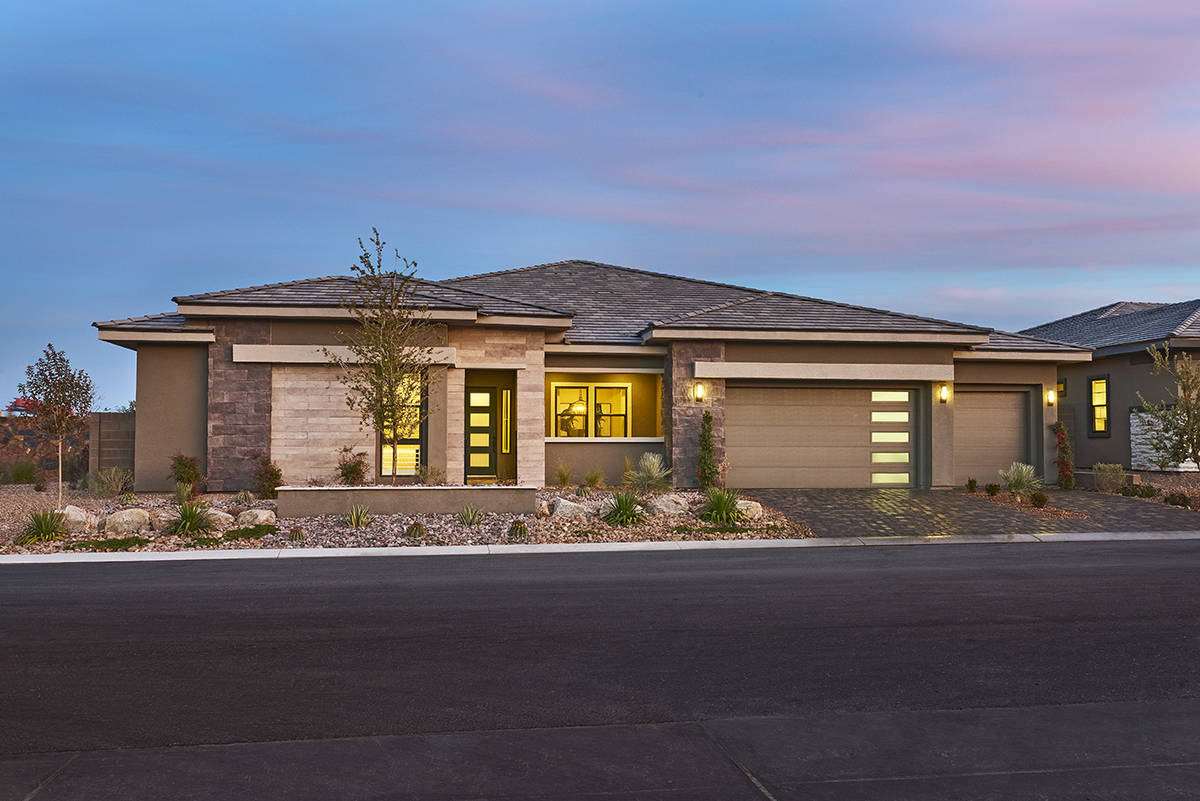 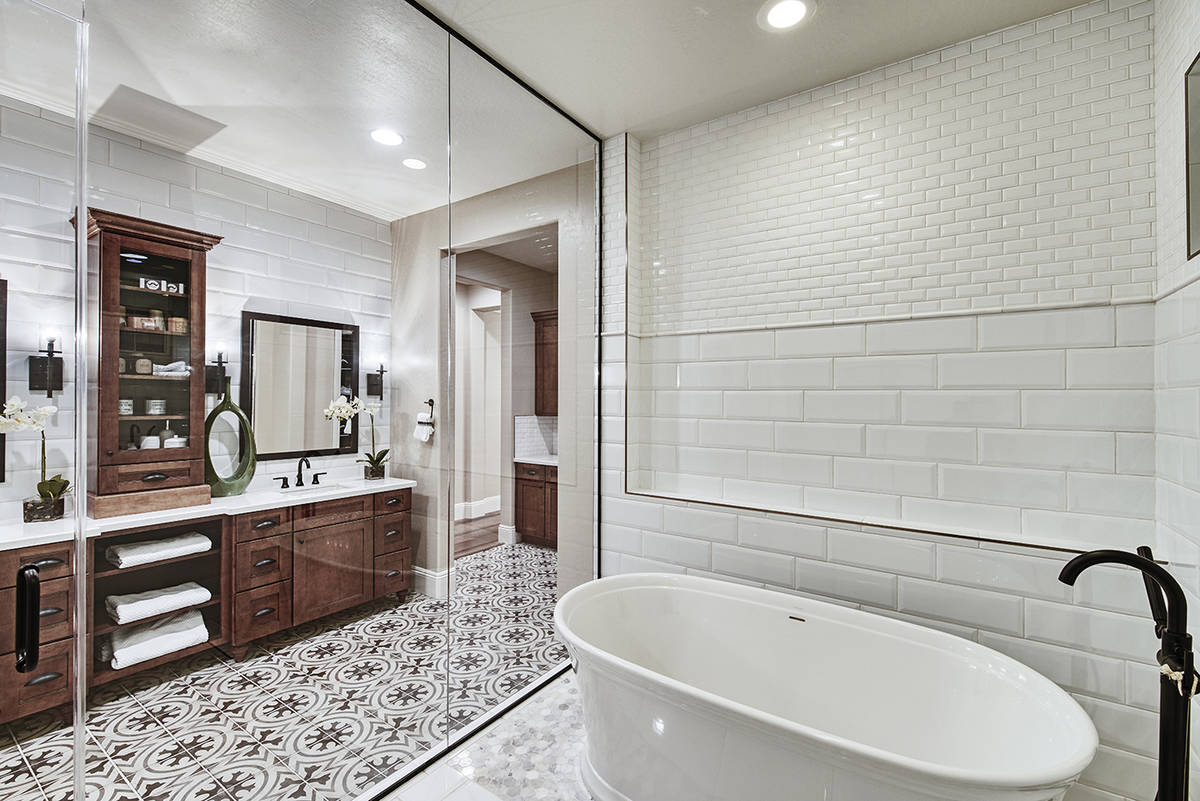 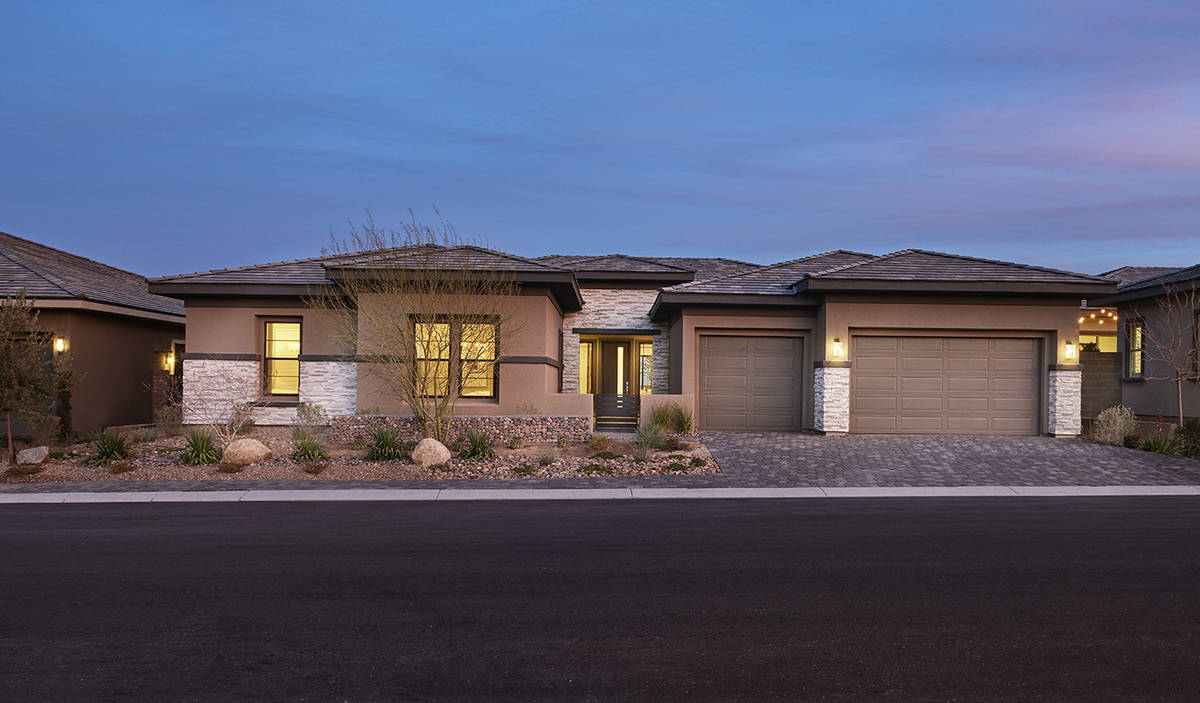 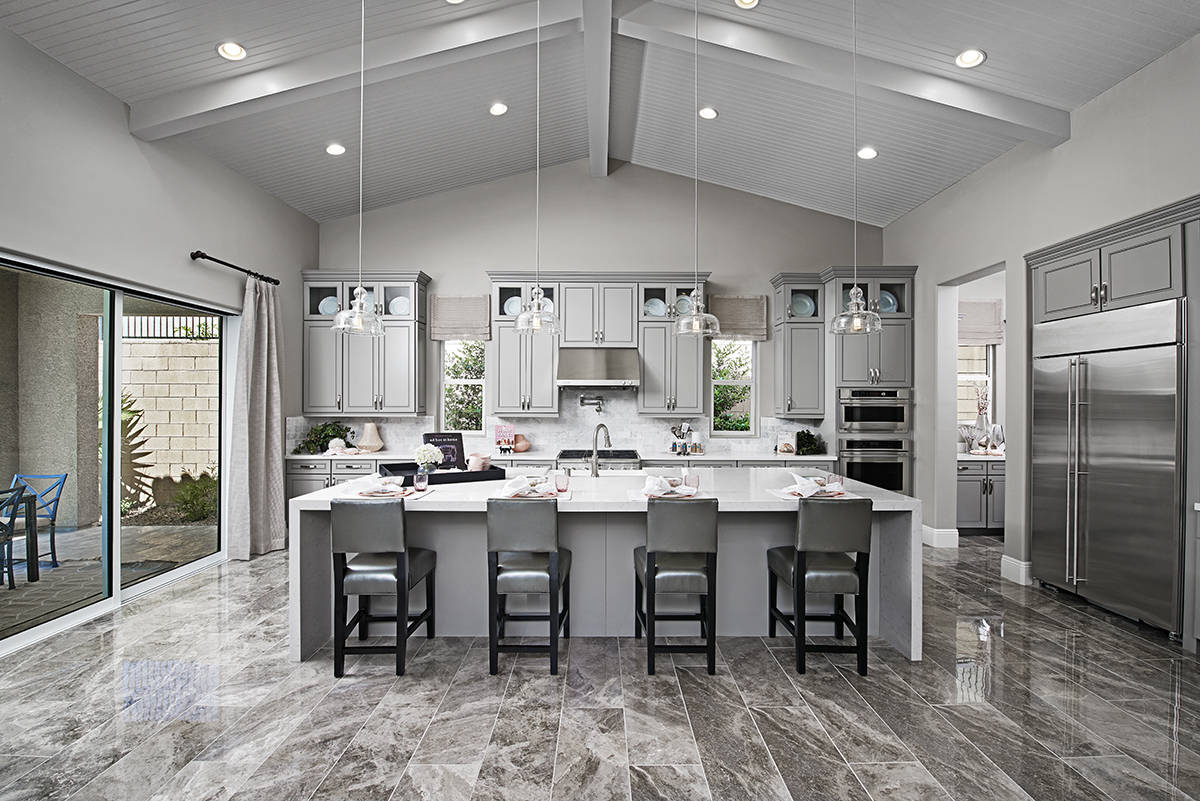 Las Vegas-based Home Builders Research reported there were 91 closings of new homes of $1 million and above between January and March, a gain of 57 percent over the 58 closings in the first quarter of 2020. The COVID-19 pandemic didn’t have a big impact on closings until the second quarter of 2020 when Las Vegas was shut down for an extended period.

“More people continue to come over from California and people selling there and coming here are often accounting for the more expensive homes,” said Home Builders Research President Andrew Smith.

Davis, who brought the Raiders to Las Vegas from Oakland, paid $5.3 million for the condo at the ultra-luxury resort-style golf-course development in Summerlin where celebrities and executives have built and are building luxury custom homes. Davis closed on March 15, according to Clark County property records. His purchase was the fourth highest price paid for a new home in the first quarter, Home Builders Research reported.

As originally reported by Real Estate Millions. Davis paid $8.5 million for a 1.21-acre lot in the Summit Club in December 2017 and planned to construct a custom home there. In July 2020, Davis sold the lot for $10.5 million and days later in August paid $6 million for a 6.34-acre lot in Ascaya, which is closer to the Raiders headquarters. Luxury builder Blue Heron was named to construct a home for Davis.

Coming in No. 2 on the first quarter list was Canarelli, the former owner of American West Homes that he sold to Pulte Group in 2019 for an undisclosed final price that exceeded $150 million at a minimum. He paid $7.6 million for the unit that closed March 11, Home Builders Research reported.

The No. 1 sale of the first quarter was a bungalow unit in the Summit Club, a joint venture between Discovery Land Co. and the Howard Hughes Corp., for $7.85 million, according to Home Builders Research. The buyer was Summit 197A LLC., according to Clark County property records.

The No. 4 sale was in the hillside community of Ascaya in Henderson where Richard Taylor paid $6.3 million for a home built by Bryan Construction in a project for Ascaya Inc. The two-story home measures more than 8,700 square feet and also has a 1,500 square-foot garage, according to Clark County property records.

The No. 5 sale for $5 million was by Woodside Homes in The Ridges in Summerlin. The buyer was Alexander Yi. The two-story home measures more than 5,500 square feet and also has a 950-square-foot garage, according to Clark County property records.

Steve Corbett, vice president of sales for Richmond American Homes, said they’ve sold through their luxury product rapidly and have only one community left with a high-end designation — Galway Grove in the southwest valley. It has sold out of two phases of 40 homes in the first quarter and hopes to release the third phase of eight lots in May and fourth phase of 24 lots this fall. Homes are built on half-acre lots and most homes close between $900,000 and $1 million.

“You have a lot of people coming in from California and Hawaii where their price points are substantially higher, and they can come in and buy a half-acre with a 4,000 square-foot single-story for price points that look extremely attractive,” Corbett said. “There’s also a lot of move-up people with the appreciation the market has seen. People who might not have afforded that previously now can sell their home for the maximum dollar and transfer that into a luxury product.”

Corbett said the demand will continue to outpace the supply for quite a while. Any builder that has product lined up will have people waiting to buy it, he said.

“The demand is so great across the board,” Corbett said. “We definitely have some other upcoming communities for luxury products, hopefully, by the end of the year. And we’re always on the hunt for land. We’re excited about that high-end product, but it’s hard to find the land for it to make it work.”

The demand is fueling price increases in the new-home market with the need for lumber, roofing materials, plumbing and other supplies. Manufacturers can’t keep up, Corbett said. Homes are costing $20,000 to $30,000 more for lumber increases alone, he said.

“Builders are having to raise prices on a daily and weekly basis to keep up with the product,” Corbett said.

Realtor Bob Barnhart with Luxurious Real Estate said the luxury new home market remains so strong that he has an expected offer coming from an Oklahoma buyer to purchase a $12 million, 18,210-square-foot Mediterranean-style spec home under construction in Southern Highlands. The home is about four to six months from completion.

Barnhart is also the Realtor for a $6.1 million spec home under construction in The Ridges by Britim Inc. It measures more than 8,800 square feet. That home has an offer to buy and close escrow by the end of May.

The demand for existing homes also has been strong and breaking records.

In Las Vegas, Barnhart said there are 35 home sales pending of $3 million and above. The rebound of the economy from COVID-19 and low mortgage rates in 3 percent range are contributing to the demand, he said.

“If you look at some of the larger home sales, some of them have been on the market for one to three years and now that the market is in this upswing, those are the homes that are selling,” Barnhart said. “A limited inventory is causing these upper-end luxury homes to sell, which is awesome.”

Custom luxury builders aren’t afraid to take on spec projects, knowing there are buyers and a lack of supply.

Domanico Custom Homes sold a $4.9 million spec home in Southern Highlands in February and has another on the market for $4.39 million. It measures 6,200 square feet with five bedrooms and is expected to be finished by July. The builder also plans to break ground on two multimillion homes in Southern Highlands and is eyeing other opportunities across the valley.

“We’re just seeing so many people coming from out of California,” Domanico Jr. said. “There are a lot of cash buyers.”

Erika Geiser, vice president of sales and marketing for luxury builder Christopher Homes, said the luxury market shows no signs of slowing. In the second quarter, they’re seeing a similar pace as the first quarter with six to seven sales a month. This is the strongest new-home market in 15 years, she said.

Christopher Homes is selling one-story and two-story homes in MacDonald Highlands in Henderson ranging from $1 million-plus to more than $2 million.

“We’re seeing the majority of these homeowners from California,” Geiser said. “It’s the California exodus.”

Geiser said the demand has been so strong that they’re looking at additional land in MacDonald Highlands to continue building luxury homes there.