Skip to content
Sign up for our newsletter
section-ads_high_impact_1
BY JEFFREY MEEHAN SPECIAL TO THE LAS VEGAS BUSINESS PRESS
August 7, 2015 - 4:20 pm 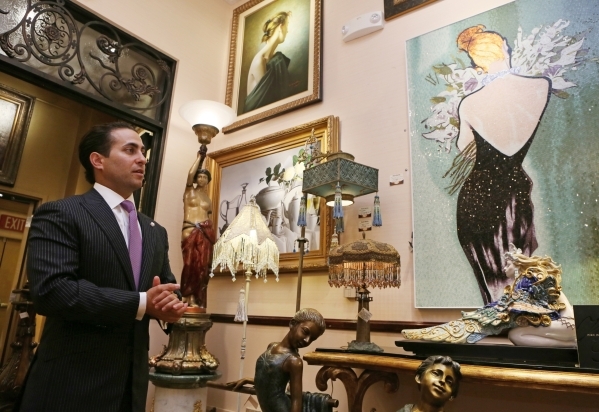 General manager Ike Dweck gives a tour of an upstairs showroom at Regis Galerie located inside the Grand Canal Shoppes at The Venetian on July 24. A Christopher Guy mozaic is shown hanging at far right. The gallery, which has a variety of unique artwork, jewelry, lighting and collectibles, is undergoing an expansion and renovation that is slated to open this fall. RONDA CHURCHILL/LAS VEGAS REVIEW-JOURNAL 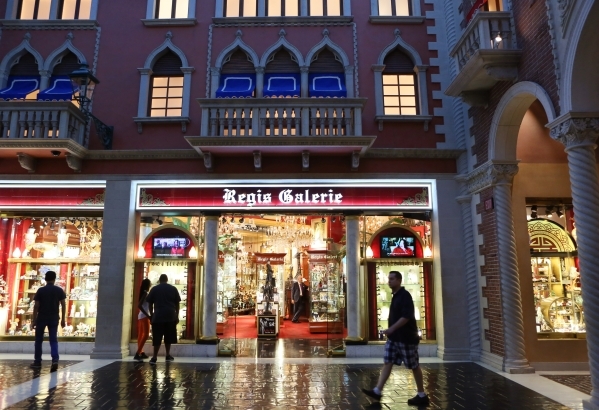 People window shop as they walk by Regis Galerie, located inside the Grand Canal Shoppes at The Venetian, on July 24. The gallery, which has a variety of unique artwork, jewelry, lighting and collectibles, is undergoing an expansion and renovation that is slated to open this fall. RONDA CHURCHILL/LAS VEGAS REVIEW-JOURNAL

A fine art and collectibles gallery on the Strip is taking on some unique options for its upcoming expansion in the hopes of appealing to a broader market.

Regis Galerie Inc., inside The Venetian’s Grand Canal Shoppes, will add 6,000 square feet of space over the next few months, creating a new shop-within-a-shop experience as it adds to its 19,000-square-foot shop.

The shop-in-shop experience is something unique to Las Vegas and the world, explained Ike Dweck, general manager at Regis Galerie.

Dweck hopes the store will become a destination — a place you have to stop by and see while vacationing in Vegas.

For some, Regis’ collection of fine art and furnishings has already been a destination. Some of the items run into the millions of dollars. On the second floor, Michael Jackson was an avid shopper in the Empire room’s collection of French antiques.

Dweck also hopes to expand the demographic of his client base. While Regis has previously targeted couples between 48 and 68 looking to get away for the weekend, the new plan is to appeal to a younger crowd as well.

Also part of the marketing plan is an effort to host convention parties inside the shop. Dweck hopes to see a rise in business from this area — also a deviation from Regis’ normal demographic.

Prior to their expansion, Dweck said, most people going to a convention were not likely to come to a shop such as Regis. But that will change when the store plays host to private parties with conventioneers coming directly to the shop.

Dweck said he has relationships with the restaurants in Venetian that can cater the parties.

“That’s another stream of revenue that’s completely outside of the box and different for us,” said Dweck.

When the Dweck family brought Regis to Las Vegas in 1999, the family still had an interest in a gallery in Palm Beach, Fla. It has since severed ties to it. Son Ike manages the local shop and his father Samuel, the owner, remains involved.

The shop lost footing on the domestic side of the business during the recession, but kept afloat through Asian art sales, mostly due to China’s thriving economy.

But Dweck said the domestic business has been on the rise over the past 18 months.

The jewelry area is a good example of Regis’ growth plan. Dweck wants to bring in many lower cost items to expand his customer base. Many of these items will range in the hundreds of dollars. But the shop will still carry its luxury lines that can run into the six figures. The jewelry area encompasses 700 square feet in its own room. The jewelry had been limited to a few cases in the front of the store.

Regis will create several new “departments,” or boutiques, for each concept or luxury brand.

Along the row of new boutiques, guests will find an area dedicated to Christmas — open all year long. Dweck sees the Christmas section bringing in locals — a demographic that has always lagged for Regis.

Other areas will be dedicated to crystal makers Liuli and Dawn Crystal and other companies such as Lladro.

Customers will also be able to hang out in the new Regis Saloon and Coffee Bar.

And onlookers can catch a glimpse of one of Regis’ specialties — Asian art.

Behind all that lies a special room dedicated to another of Regis’ specialties — fine rugs.