Skip to content
Sign up for our newsletter
section-ads_high_impact_1
By Jeffrey Meehan Special to the Las Vegas Business Press
May 25, 2015 - 3:00 am

The job market for accountants has been on an upswing and that’s welcome news for recent graduates.

Several large-scale CPA firms around the valley said jobs are likely waiting for students about to walk across the stage with master’s degrees in accounting.

William Wells, office managing partner at McGladrey LLP’s Las Vegas office, said the firm, which operates in 100 offices, has been in a “heavy growth mode.”

“We’re growing at double-digit percentages,” Wells said. “We are definitely in a hiring mode.”

In the past few months, Wells said, the firm has added 16 new hires who will start in October.

“I think overall there are more opportunities than there were a few years ago,” Wells said. “It still isn’t robust as people would like it to be, but I do believe we’re on an incline going up.”

The projected statistics support his sense of an uptick, and the future looks promising.

According to the Bureau of Labor Statistics’ website, accounting jobs are expected to increase 13 percent over the next seven years.

“Historically, we have hired both experienced as well as new staff,” Goodnough said,

The job market is good, but Goodnough, like others, said candidates have to have the requisite education to be considered. Many staff members at Stewart Archibald have master’s degrees.

But accountants with bachelor’s degrees also have a place.

“Other firms just looking for accountants would not require a masters,” said Douglas Winters, CPA and managing partner at Bradshaw, Smith &Co.

Winters said Bradshaw Smith is hiring. “It is up from previous years,” he added.

Jobs may be up, but wages are not growing as robustly as the job market.

“It’s probably staying about the same,” Winters said. “It might be creeping up a little bit.”

According to the Bureau of Labor statistics, the average wage for accountants and auditors increased by less than a percent in 2014.

A far as starting wages, the estimates ranged from mid-$40,000s up to $60,000 per year, depending on the amount of education a candidate has.

The Bureau of Labor Statistics reports that the national average for wages for accountants and auditors, as of May 2014, was nearly $74,000. States such as New York and California were higher, and some specialty fields paid well closer to $90,000 per year, mostly in the security and commodity market.

But Wall Street isn’t the only specialties market for accountants. Wells said international specialties is another growth area.

And, Wells added, there are opportunities in cybersecurity given the many data breaches around the globe.

“There are some good opportunities in that area as well,” Wells said.

Winters pointed to audit and tax as a target area but added that there are firms looking for other specialized skills.

Tech skills aren’t everything for winning that new job.

“The ability to learn is really the bigger issue; the ability to get into an industry, learn issues, work through issues,” Goodnough said. “We’re looking for foundation that’s been solidly acquired by a new graduate and the ability to add to it.”

Some firms are looking farther away.

Upward mobility is an important feature of any new job, and firms are not disappointing potential candidates in that area either.

Candidates may have the opportunity to stay in the Las Vegas Valley, but could also end up moving away to move upward with national firms.

“It’s a little bit of both,” Wells said. “We’ve created opportunities here locally for many of our high performers, but in other cases, if a better opportunity exists in another one of our offices, in those cases people contemplate transfers.”

There isa upward mobility in local firms, too.

“The prospects are strong for upward mobility because, again, our growth,” Goodnough said. 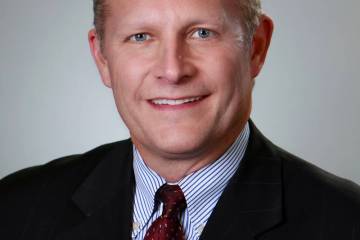