Skip to content
Sign up for our newsletter
section-ads_high_impact_1
By Stephanie Annis Special to the Las Vegas Business Press
March 7, 2016 - 5:42 pm 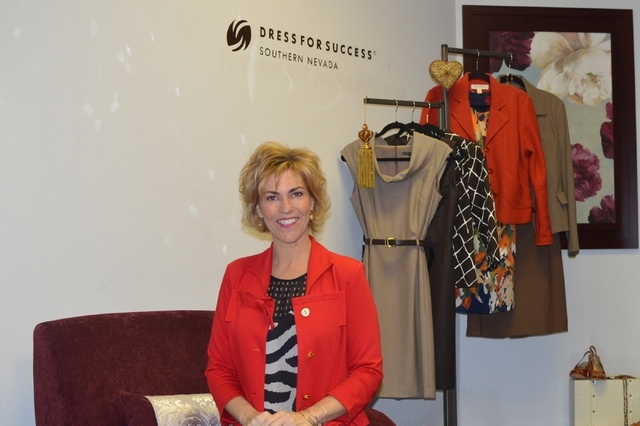 Paula Lawrence, executive director of Dress for Success Southern Nevada, has built a powerful nonprofit in a hurry by blending skills learned as a security expert and an etiquette consultant.

Dress for Success Southern Nevada was founded in 2009, but didn’t greet its first clients until it 2012. It took time to assemble a board of directors, find a location, collect items and close details.

The group aims to provide job-seeking women with the clothes and training that will help them succeed.

Lawrence joined the organization in 2012 as a board member. Later, as executive director, she developed Dress for Success Southern Nevada into a nonprofit volunteer-driven agency.

“In 2012, the community really needed the services Dress for Success was providing. We had some of the highest unemployment in the country,” Lawrence recalled.

Lawrence and the board worked hard and “got us to the position where we were financially healthy … and had a good game plan, a strategic plan” before she took a salary as the full-time executive director.

Lawrence founded Key Note Academy and is an internationally recognized master protocol and etiquette consultant. She has been a general manager supervisor and a trainer of more than 200 high-end bodyguards in the private sector for upscale stores, celebrities and hotels.

Today, she is helping women improve their appearance, job marketability and self-esteem.

Lawrence is also a member of the Program Advisory Committee for the International Culinary School at the Art Institute of Las Vegas and a frequent speaker at community events.

She earned a Bachelor of Arts in communications from California State University Fullerton and an master’s of business administration from Pepperdine University.

The Dress for Success facility at 3400 W. Desert Inn shows the organizational efforts of California Closets and many volunteers. The group is staging its Support Our Girls program during Nevada’s Big Give on March 10.

Q. How did you move from private security to Dress for Success?

A. I needed to re-invent myself a little bit and took all of the skills and training, quit the private security industry… (and) became certified; I’m an internationally recognized master etiquette and protocol consultant. I went back and trained myself officially in what it was that I learned through the security industry people wanted. They wanted social IQ; they wanted professional presence; they wanted pleasant people; they wanted people who were dressed nice, that looked the part. Knowing how to address a professional, knowing how to address their wife and family, just all the protocols that come along with some chivalry and some civilization and what I call Social IQ. I was able to build my own business, it’s called Key Note Academy.

Q. What is Nevada’s Big Give?

A. It’s a fundraising opportunity that the State of Nevada participates in and it’s been around for a couple of years. So, Dress for Success recognized very early, as a small organization, we need to take advantage of every possible fundraising outlet. The creators have made it (Nevada’s Big Give) very user friendly. There’s a lot of promotion going out to the entire state not just Southern Nevada. It’s a day, on March 10th, when people can say ‘gosh how do I give to the organization that I like?’ Or ‘I’ve been meaning to do it all year; and here’s this day that, as a state, we try today look at how much our state gave on this day.’ But very specifically, because of the platform of Nevada’s Big Give, you can select the charity or charities that you’d like to donate too. It’s a very simple online process.

Q. What expectations do you have and what results do you want to see from Nevada’s Big Give?

A. We are going to take advantage of that day to remind the community that it’s more than just the clothing you see on the outside. We’re going to call that day Support Our Girls. So, it’s Nevada’s Big Give and we’re hoping everyone will help us Support Our Girls. We’ve been very lucky to secure some large donations of new undergarments. So we have bras, intimates if you will, from Spanx and Vanity Fair we’ve collected over the last few months through a large donation; and we’re going to invite every single client — over 3,500 women that we’ve served — we’re going to try to reach out to every one of them and hope that they’ll come down on that day and rather than just doing professional suitings, we’re going to be able to distribute these brand new intimates which are very expensive typically. Not all clients come to us with undergarments. So, we’re going to use that day to kind of remind Southern Nevada that ‘yea we love the clothing donations’ but there’s so much more that goes into helping a woman feel prepared.

Q. What unique considerations go into dressing a client?

A. So if you wake up in a shelter, if you have a job interview at nine in the morning, you may have to get up at 5 a.m. You may have to take several buses to get to that job interview. You don’t have your own personal closet; so maybe you’re clothes are under the mattress to stay straight, and you don’t want them to get stolen or anything like that. At 5 a.m., the lights aren’t on. So we take particular care not to give you navy shoes or black shoes; to make sure that we give you an outfit that you are going to be successful with in the morning. So when you’re coming to our organization to get clothes, we’re not just handing you what fits you; it’s not a drive thru. We’re having you in and we’re asking you to tell us what it’s going to be like — where are you going to be tomorrow when you’re getting ready for this interview? We ask the questions so that we can make sure the woman is totally prepared for that interview. If she’s never worn nylons, we have to teach her how to put on hose or we need to give her slacks. We’re giving them that education. We train our stylists, and we truly care to say, “While you love this blouse, I think this one is going to wrinkle less.” We care down to that detail. Also, 28 percent of our clients are over the age of 50. And we let them know when they get that job, they can come back and get a week’s worth of clothes.