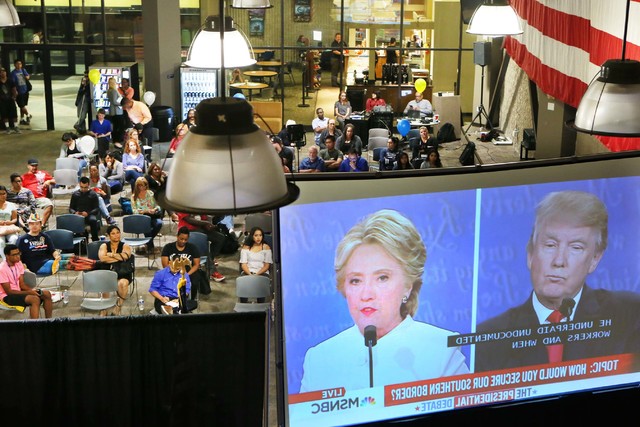 Las Vegas’ return on investment for playing host to the final presidential debate between Hilary Clinton and Donald Trump was more than just monetary.

Thousands of journalists descended on the Thomas &Mack Center at the campus of the University of Nevada Las Vegas on Oct. 19 where 71.6 million viewers across the U.S. focused their attention — making it the third most-watched debate in U.S. history, according to data from the Nielsen ratings agency.

Las Vegas also got a lot of eyes its famous Strip, where throughout the week of the debate MGM Grand Las Vegas hosted the Fox News and Fox Business Networks. Also, at the New York-New York, Telemundo set up a live stage at the property’s Brooklyn Bridge Plaza, where the network conducted live shots over two days.

After the debate, media pushed off the backdrop of pulsating lights and headed toward Las Vegas’ Chinatownside, where KNPR’s State of Nevada and British Broadcasting Corp.’s “World Have Your Say” teamed up the day after the debate for more in-depth coverage about the event and the upcoming elections. The duo broadcasted from Lee’s Sandwiches at Rainbow Boulevard and Spring Mountain Road.

UNLV officials also found the university’s time in the spotlight a positive.

“Certainly, there was a great deal of energy and excitement from our students, faculty, staff and members of the community from having the debates on campus — there is a significant level of pride that does not bring about immediate financial return but can be the catalyst for such in the future,” said Gerry Bomotti, senior vice president for finance and business at UNLV.

There was some financial cost to putting on the debate. The Las Vegas Convention and Visitors Authority and UNLV both contributed some $4 million each to hold the event.

But that could eventually be considered a worthwhile investment.

Bomotti said he’d heard “the value of the media coverage for this debate, for Las Vegas and UNLV was in the $100 million range.”

He also hoped, based on experiences of other institutions in the past, that hosting the event could translate into more admissions requests for the near future — for students looking to attend UNLV.

“We also believe the recognition received from this debate will help us with fund raising activities, not just with individual private donors but with foundations and similar corporate funding,” Bomotti said.

The debate also gave UNLV a chance to show off some of the Thomas &Mack Center’s recent upgrades.

The events center just completed more than $72 million in upgrades including new seating and an addition of 36,000 square feet.

That additional space also includes about 10,000 square feet of event and meeting space on the west side of the complex, which TMC’s officials have dubbed the Strip View Pavilion.

This is where ticketed guests for the debate were set up before the main event began.

“We believe this will have a positive impact on our bookings for this space, either separately or part of some larger event in the TMC,” Bomotti said.

That venue, and the larger TMC, could be filled up one day with future events because of UNLV’s hosting of the event.

“I also believe that the positive feedback we received on our Thomas and Mack Center, as well as the Cox Pavilion and Mendenhall Center, could lead to additional events that we host on campus, even if these are not politically themed,” Bomotti said.