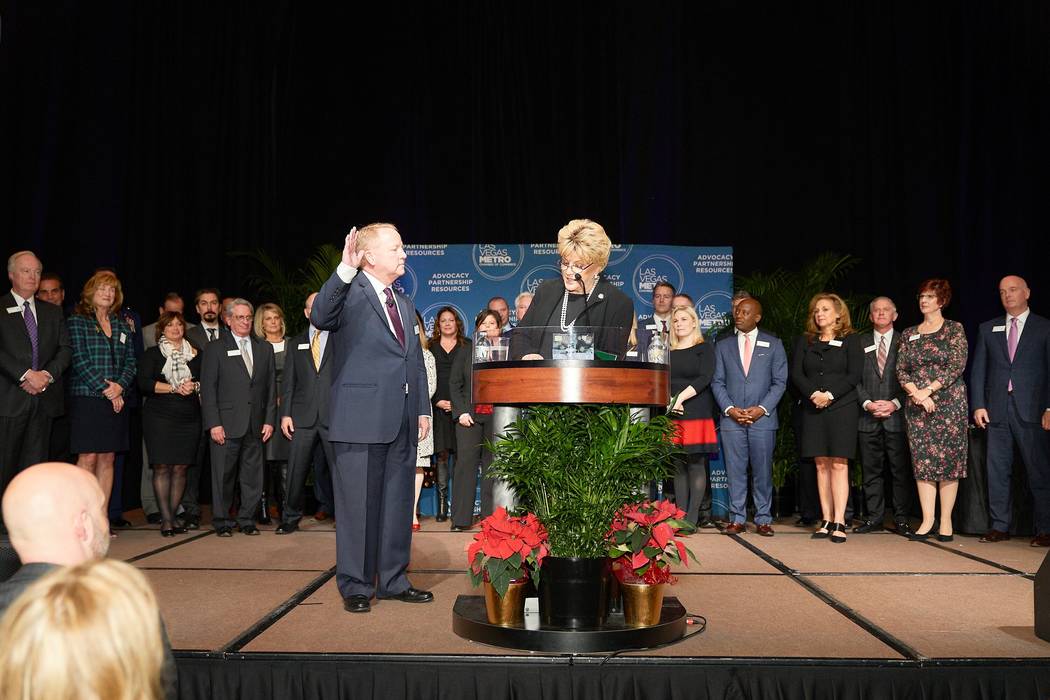 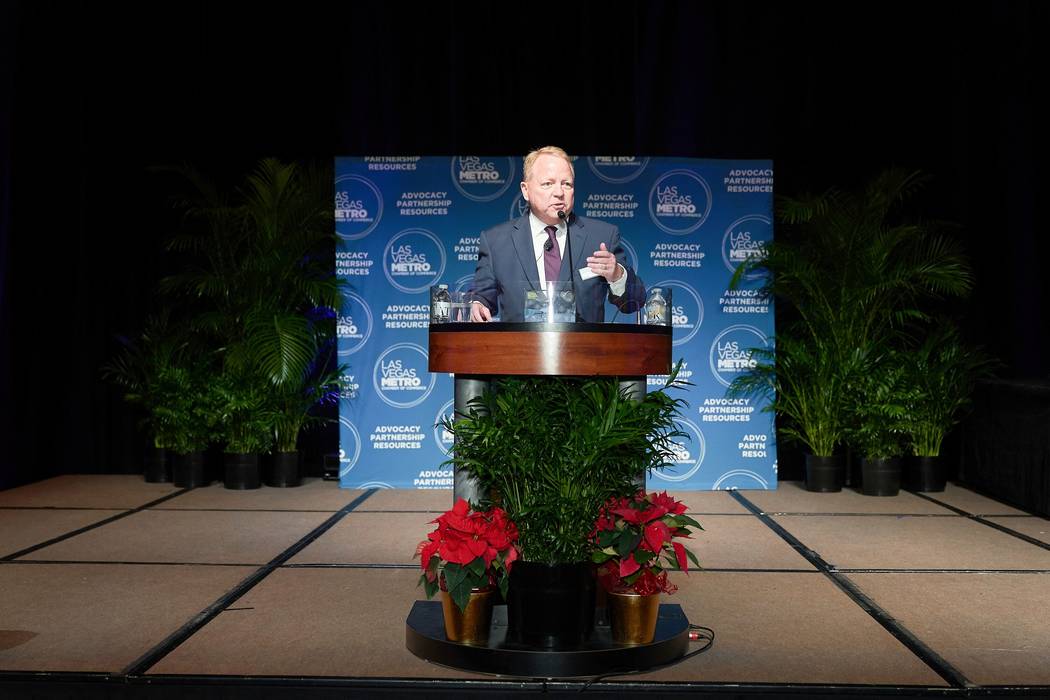 The economy is on everyone’s minds as we close out the year. There have been roundtables and talks this month citing studies, research and surveys.

On Wednesday, the Las Vegas Metro Chamber of Commerce installed Tom Burns, president of Cragin & Pike Insurance, as the 2020 chairman of the board of trustees during ceremonies at the Palms. He replaces Terry Shirey, president and CEO of Nevada State Bank.

“As our community transforms with new sports teams, new convention center, state-of-the-art underground transportation, and new resort properties opening, the chamber is transforming, too,” Burns said. “We are updating our brand and elevating our programming to reflect the community as it transforms into a world-class community. In 2020, you will see a new Chamber brand and logo, as well as renewed mission to serve you.”

The general consensus in the Las Vegas business community is that confidence of business owners has rebounded and remains high as the year comes to a close and they look ahead to 2020, but the majority fear a recession may be coming by 2021 or 2022.

Center for Business and Economic Research released a business survey.

Although the national economy recently slowed, the majority of Las Vegas business owners and executives expect no recession to occur in 2020, said Dr. Stephen Miller, a UNLV economist and the center’s director. As a result, the local economy, in our view, will continue to grow along with the U.S. economy, he said.

When asked about the timing of the next national recession, 25.6 percent of those who responded to the survey said 2020, and 32.1 percent forecasted 2021, which is higher than 17.9 percent and 26.2 percent from the third quarter, Miller said.

The remaining 42.3 percent expected the next recession would occur in 2022 or later, lower than 51.2 percent from the previous quarter.

“The most recent CBER business survey suggests that local business confidence remains at a relatively favorable level for the fourth quarter of 2019 despite potential headwinds such as trade tensions with China and slowed global economic growth,” Miller said. “The Southern Nevada business leaders expressed positive outlook on sales, profits, capital expenditure and hiring in their industry, which implies the local economy will continue to expand in the short run.”

The Southern Nevada Business Confidence Index rebounded in the fourth quarter, up by 4.2 percent from 120.7 percent in the third quarter to 125.7 percent in the fourth quarter of 2019, Miller said. Although the index, which remained at a high level and gained quarter-over-quarter, its large year-over-year loss continued with ongoing trade tensions between the U.S. and China and an anticipated global economic slowdown, he said. That could change, however, as the Trump administration has just announced a trade deal with China that boosted the stock market this week.

The index values business expectations of Nevada economic conditions, capital expenditure, sales, profits and hiring. Any number above 100 shows sentiments are positive, Miller said. These five components scored 131.8, 129.5, 127.3, 125.0, and 114.8, respectively, Miller said. Local business leaders showed a positive view on the national economic outlook for this quarter, which differs from last quarter where the local businesses expressed a soft pessimism on the future national economy with increasing trade tensions between the U.S. and China of 108 versus 95.5, Miller said.

Overall, the local business leaders expressed optimism on future national and statewide economic conditions, he said. When asked about the U.S. economy, 40.9 forecasted an improved economy, while 33 percent expected a worse economy. The remaining 26.1 percent projected no change.

When asked about the Nevada economy, 48.9 percent of the projected an improved economy, 34.1 percent forecasted no change, and 17 percent expected a worse economy, Miller said.

The sales index of 127.3 is well below the 147.4 last year, but it’s still shows optimism. Some percent predicted increased sales in their industry, 27.3 percent expected no change, and only 22.7 percent projected decreased sales.

As for profits, the local businesses felt more confident about profits in their industry but below record highs a year ago. Some 46.6 percent expected an increase, 31.8 percent predicted no change, and 21.6 percent forecasted a decrease.

There are issues the business community continues to face as reflected by the hiring index score, Miller said. That comes as local employment year-over-year growth decelerated from 3.5 to 1.8 percent from January to August.

“This may partly reflect a struggle of finding qualified workers, which remained the most difficult challenge that local businesses faced for almost two years,” Miller said.

The local business leaders’ confidence in hiring in their industry remained relatively unchanged from last quarter, but the index is at a six-year low probably due to ongoing economic and political uncertainty as well as difficulty finding qualified workers, Miller said.

When asked about hiring in their own industry, 34.1 percent predicted an increase in hiring, 46.6 percent expected no change, and 19.3 percent projected a decrease, Miller said.

The city will also add approximately 12,000 rooms, equaling an 8 percent increase, to its total inventory in the next few years to meet the potential increased demand for accommodations with these projects, Miller said.

Credit conditions generally improved for local businesses compared to the prior quarter, Miller said. More local businesses sought a new line of credit in the past year. Of those who applied, 87 percent received their credit as requested, much higher than the 65 percent from last quarter. Only 4.3 percent reported a rejection of their request, which is substantially less than the 25 percent from the previous quarter, Miller said.

Burns said Las Vegas has “grown and thrived because we aren’t a community of critics. We are a community of men and women who are in the arena, who are willing to take risks, fall and get up again, and who come together to create something bigger than themselves.”

Burns said the Las Vegas Chamber has made a difference in building the community from a sleepy railroad town to an iconic global city.

“Businesses need strong champions to stand up for them in government,” Burns said. “The Las Vegas Chamber has been in the arena for decades, fighting on behalf of Nevada’s businesses. Whether taxes, minimum wage, workers compensation, construction defect or workforce development, the decisions made in the halls of government directly impact all our businesses.”

Craigin & Pike has 53 employees, and Burns said small businesses like his play an important role in the economy and need a champion in the Chamber of Commerce.

A top priority in 2020 is preparing for the 2021 legislative session. If you’re in business, you have to be in politics because there will be several proposals that will directly impact businesses – many of them negatively, Burns said.

“As more and more proposals are put forward that would harm employers and small businesses are put forward — often from interest groups outside Nevada — it is important that we work together,” Burns said.

There are many business organizations in our state — the LVGEA, other chambers and trade associations such as the Nevada Contractors’ Association and Subcontractors Association, Burns said. However, while there is concern about the same issues, “the conversations are siloed,” he said.

“Let’s find common ground on the issues that impact businesses, recognize that not every industry will agree on every issue, but when we have consensus, let’s make sure we are working in lock-step in the arena,” Burns said.

A major part of preparing for the legislative session will be convening the Southern Nevada Forum, which has helped make progress on such issues as expanding the health care workforce by funding the UNLV School of Medicine, and by funding the Health Sciences building that is a partnership between Nevada State College and College of Southern Nevada.

“The next Southern Nevada Forum kicks off in January, and I would like to see everyone in this room get involved,” Burns said. “This is your chance to shape the future for the next generation.”