Skip to content
Sign up for our newsletter
section-ads_high_impact_1
BY BUCK WARGO SPECIAL TO LAS VEGAS BUSINESS PRESS
December 25, 2018 - 10:56 am 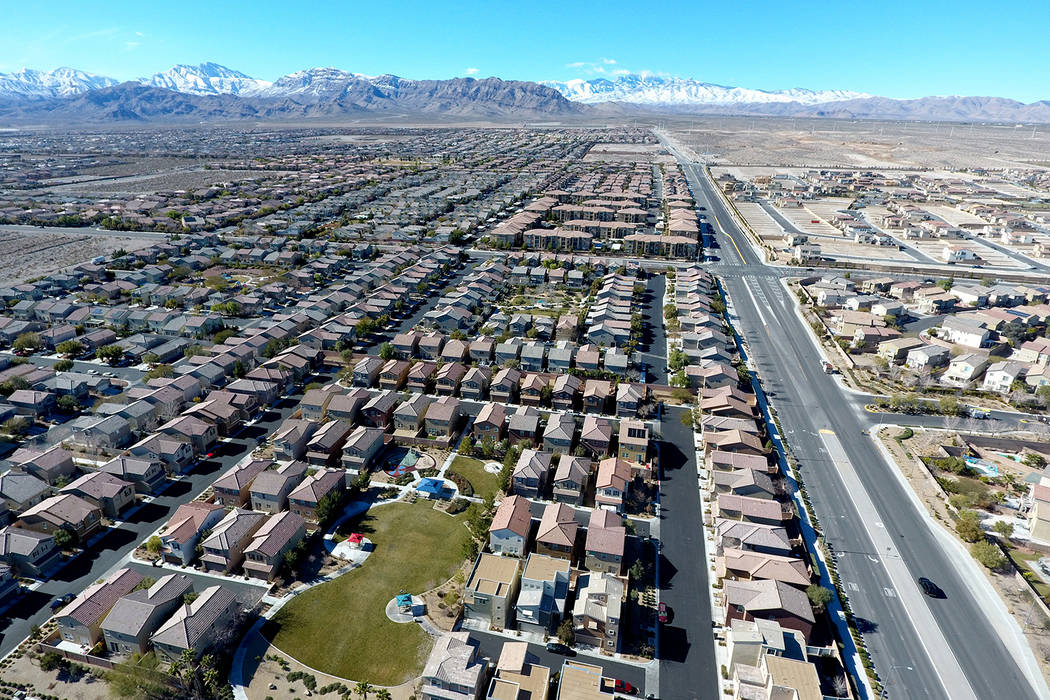 Southern Nevada remains on pace for its highest annual closings since 2008 but that number could soften in 2019, according to a new report released Monday by Home Builders Research.

The November numbers were bolstered more by attached product rather than single-family homes.

The performance of new home closings should soften based on slowing net sales, according to Home Builders Research President Andrew Smith.

Historically since 1999, the number of net sales for the fourth quarter are 26 percent lower from the first three quarters. This year, however, the net sales for the first three quarters averaged 919 a month compared to 625 for the fourth quarter so far. That’s a decline of 47 percent or nearly twice the 20-year average, Smith said. That gap is expected to grow in December as builders are on pace to report less than 500 net sales — the lowest monthly total since 2015, Smith said.

The expected decrease in net sales is surprising given that sales were up 21 percent from the first quarter, Smith said.

The final weeks of 2018 appear to “be very comparable to what we saw from 2014 through 2016 for the same time period,” Smith added. He said the “hot streak” for new home net sales went from February through the late summer.

“Going forward into 2019 however, based on the slowing net sales performance, we can expect the number of new home closings to further soften as well,” Smith said.

The recent wild fluctuations in the financial markets “will most likely have some negative effects on housing,” Smith said. Historically, ongoing negative press of slowing financial markets” will usually inject enough doubt into consumers about their future that housing demand will eventually soften.” Smith added that despite the signs of a “minor slowdown” in Las Vegas housing, hopefully those national concerns won’t linger and the stock market will rebound.

“Most economists suggest many of the housing market fundamentals are in place in Las Vegas,” Smith said. “We hope that despite the serious status of housing affordability, the December downward free fall of the financial markets will have a short-term effect on consumer housing demand.”

Smith said there’s bright spots with the Southern Nevada economy. In Las Vegas the annual job growth is nearly 4 percent, unemployment is about 4.4 percent, and in-migration will range between 1.5 to 2 percent in 2018.

“Those statistics alone look to be good enough to suggest a positive local outlook on near term-growth potential,” Smith said.

As for prices, the median closing price in November for attached and detached was $380,798, which is a year-over-year increase of 8.2 percent.

“These numbers hopefully show the beginnings of improved affordability in the market compared to what we were seeing for most of the year,” Smith said.

That was helped by LGI homes, a Texas-based company and newest production builder in the market that opened its Lake Mead Dolly community in the east valley, Smith said.

LGI targeted the entry-level market and recorded its first eight closings in November with a median price of $244,400, 36 percent lower than the overall median price, Smith said.

“Having pulled 83 percent for the 102-lot project in just six months, their strategy seems to be striking a chord with homebuyers,” Smith said.

LGI has purchased four more parcels of land in the east and North Las Vegas markets, and pulled 25 percent for their next offering near Boulder Highway and Tropicana Avenue in November, Smith said.

“While permit totals since September have basically matched 2017 levels, builders continue to bring new communities online at a much greater pace in 2018,” Smith said.

The decline has been in the southwest valley that went from 48 percent of the new projects in that area in 2017 and 21 percent this year, Smith said. Henderson rose to 20 percent from 18 percent, while the northwest valley went from 22 percent to 23 percent.

“We can see the drastic change in market share for North Las Vegas in 2018 with nearly one-quarter of overall activity shifting from the southwest sub-market,” Smith said. “We feel this is directly related to the master-planned communities in these areas. While Summerlin is still growing, Mountain’s Edge and Southern Highlands are both moving toward selling out, especially when it comes to parcels available for new tracts.”

“The relative affordability and availability of larger parcels for development in North Las Vegas make it a no-brainer that builders would eventually make more effort to exploit these advantages,” Smith said.

“A major buzz word for the housing industry in 2018 has been affordability,” Smith said. “When comparing the average plan size and base price of the new projects opened over the past two years we can see that builders are moving in the direction of slightly smaller and lower priced products.”

Christopher Homes continues to add land around its Vu luxury project in Henderson, acquiring another 17 acres at just over $500,000 per acre, Smith said.

Edward Homes closed on 5 acres in the southwest valley, he said.

Harmony Homes made its third purchase of 2018 with 21.5 acres in Henderson on Horizon Ridge Parkway adjacent to U.S. Highway 95. Smith said that’s a “bit of a departure” after being positioned almost exclusively in the east and North Las Vegas sub-markets.

Storybook Homes made their entry into the Cadence in Henderson, buying 10 acres with Woodside Homes also adding to their collection of land in the with 14 acres, Smith said.