Skip to content
Sign up for our newsletter
section-ads_high_impact_1
By BUCK WARGO SPECIAL TO LAS VEGAS BUSINESS PRESS
December 26, 2017 - 7:43 am 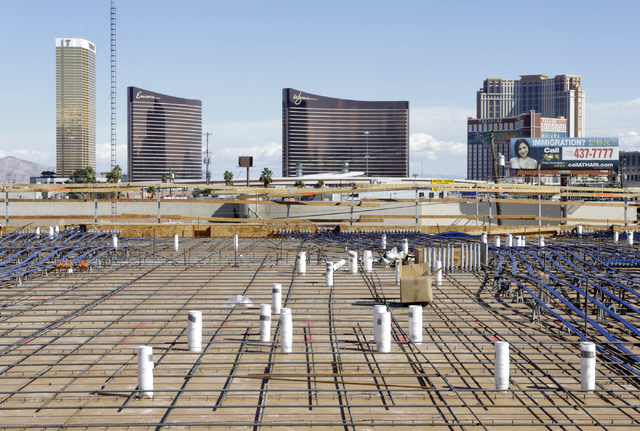 A view of the Las Vegas Strip as seen from the under construction 295-unit rental apartment development site in Chinatown on Feb. 22. (Bizuayehu Tesfaye Las Vegas Business Press)

Commercial real estate is expected to be one of the big winners of the GOP tax bill signed into law by President Donald Trump, and some suggest Las Vegas could further benefit from California residents fleeing for tax gains.

“I think commercial real estate will be significantly affected because they’re the entities that will get the benefit of deductions and changes in tax depreciation law,” said Scott Taylor, a certified public accountant and shareholder at Piercy Bowler Taylor & Kern. “I think it will result in more investors purchasing real estate and more commercial buildings because of the immediate deduction for improvements. It will probably affect the restaurant market for the same reason. It’s more encouraging to get into the business with more deductions up front.”

Matt Vance, an economist with CBRE and a research director and analyst for the Southwest region that includes Nevada, said commercial real estate was spared when Congress decided to maintain the 1031 exchange and commercial mortgage tax deductions.

The biggest impact the tax bill will have on the commercial sector will be on office and apartment complexes as demand increases, Vance said. That would lower vacancy rates, increase rents and spur more development.

“There could be a repatriation of corporate profits currently held overseas, and if that were to happen that would to some extent stimulate economic growth,” Vance said. “That would accelerate job growth and company expansion is good for office occupiers. That buoys household formation, which drives the demand for the multifamily sector because of the confidence in the economy and job growth. The single-most important driver in assessing the performance of real estate is employment and business investment.”

Not everyone has shared the optimistic view that the tax cuts will stimulate the economy beyond the short term. Many economists have predicted the growth would be minimal and actions by the Federal Reserve to raise interest rates could negate the stimulus. There are also long-term concerns even about the most optimistic forecast that the federal deficit would be increased by $1 trillion.

“The Fed will have to get ahead of it and that will take away any potential stimulus effort of these tax cuts,” said Chris Thornberg, a partner with California-based Beacon Economics and director of the UC Riverside School of Business. “They won’t be accomplishing anything but increasing the deficit.”

Time will tell if the tax bill increases economic activity, and if it doesn’t it’s likely to be revamped, Taylor said.

“History will tell,” Taylor said. “If it spurs the market, they were right all along, but if it doesn’t, there will be some answering to do.”

In addition to commercial real estate, there are concerns about the tax implications on the housing market given the mortgage deduction has been lowered from $1 million to $750,000. Coastal markets like California, for example where there’s an income taxes, are property and income taxes have deductions limited to $10,000.

KRE Capital in partnership with Dune Real Estate Partners and Northcap, purchased The Ogden in 2013. The group also owns Juhl in downtown Las Vegas and One Las Vegas on the far South Las Vegas Boulevard.

Uri Vaknin, a partner with KRE Capital, said the group recently sold its most expensive home at The Ogden to a California buyer “on strict orders from his accountant to avoid additional tax liability” because of the GOP tax bill.

“This is the second buyer from whom we have heard this sentiment,” Vaknin said. “The (Trump tax plan) could be a boon for Vegas real estate with California buyers feeling California.”

Chris Bishop, incoming president of the Greater Las Vegas Association of Realtors, said there’s already a “major migration of people moving from California to Nevada,” because of the tax structure (and) because people can have a nice home in Las Vegas for way less than in Southern California.

“We’re seeing a lot of people come here for that reason,” Bishop said.

from $1 million dollar homes to $750,000, Bishop said. The luxury market has been the last segment to recover in Las Vegas, he said.

Tim Sullivan, managing principal of Beverly Hills-based Meyers Research that tracks the Las Vegas housing market among others across the nation said the good news is current homeowners are grandfathered into the $1 million cap. The House bill was proposed at $500,000 so the compromise of $750,000 has helped, he said.

“Professionals in big cities may end up paying more in taxes under this new plan, with the change hitting married couples harder than singles,”

Sullivan said. “Will the high costs become too burdensome on some individuals, encouraging them to move? In some cases, yes. But there are many other reasons to live in some of these high-cost markets, such as lifestyle, culture, location and weather.”

One of the biggest potential impact on Las Vegas housing, Sullivan said, is if the tax cuts spur casinos and other developers to expand and build additional hotels. That would spur additional job growth and migration that would trigger a high demand for housing and even more construction, he said.

Taylor said most businesses he deals with from mom-and-pop operations to partnerships, entrepreneurs and corporations are happy with the tax bill. The problem is the tax bill is complicated and further instructions are needed to determine how it’s calculated. Not everything is explained in the law, especially some of the deductions when it comes to professionals such as attorneys, architects, engineers, accounts and doctors, he said.

“There are some tricky computations for salary and most of the LLCs and partnerships do not issue a salary to the owner and some of the regulations need to explain how it works because the law is not clear,” Taylor said.

On the immediate front, Taylor said with the tax bill there’s a 100 percent depreciation of assets purchased that now dates back to mid-September. It had been 50 percent until then.

“There will be a lot of purchases happening right now before Dec. 31. That will create a deduction right now,” Taylor said.

Accountants will be busy figuring out the new tax law, said Taylor, who added changing a few rates is not changing its simplification.

“People were suggesting you will be able to do your taxes on a postcard,” Taylor said. “That’s ridiculous. Some people might but able, but for the most part, it complicates things a lot.”