Skip to content
Sign up for our newsletter
section-ads_high_impact_1
By BUCK WARGO SPECIAL TO LAS VEGAS BUSINESS PRESS
September 18, 2017 - 8:00 am 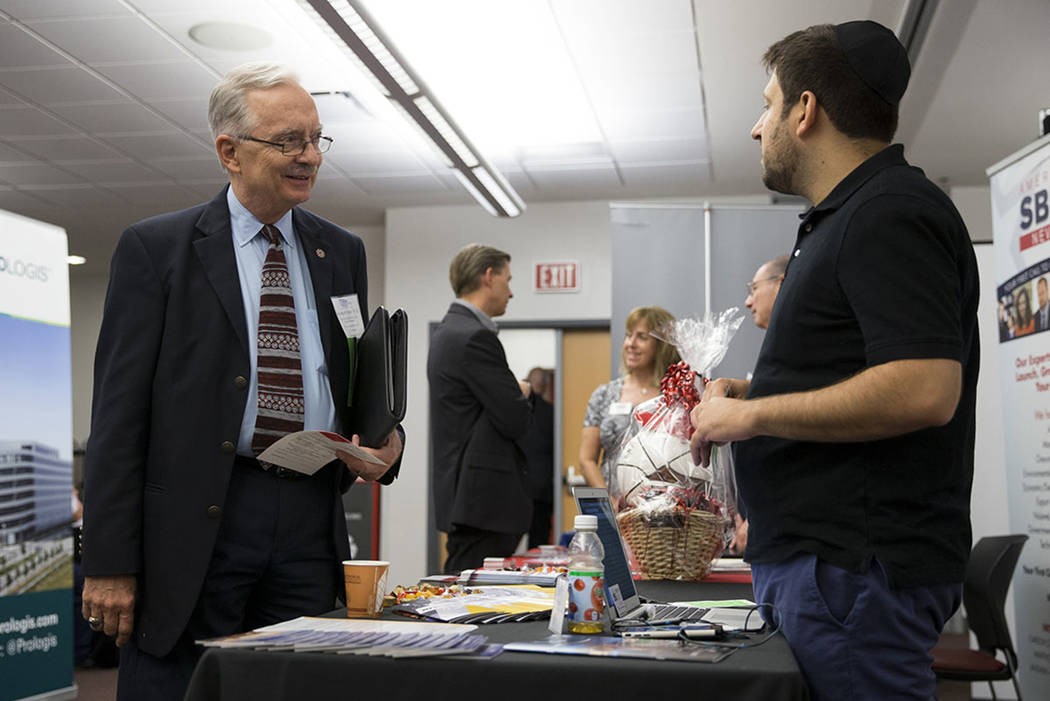 Stephen Miller, left, director of the Center for Business and Economic Research at the Lee Business School, speaks with Jake Halu of the Nevada Center for Advanced Mobility, during the Nevada Economic Development Conference at UNLV in Las Vegas on Sept. 12. (Erik Verduzco Las Vegas Business Press)

The week before, Amazon announced plans to open a second North America headquarters; and it was perfect timing as city and state officials, business executives and regional economic development leaders met at UNLV Sept. 12-13 to discuss Nevada’s new emerging economies, opportunities and trends for building a strong Nevada in a global economy.

The conference opened on a day Gov. Brian Sandoval announced the state is working to lure Amazon and its plans to invest $5 billion on a new facility that would require 50,000 workers.

Barbra Coffee, chairwoman of the Nevada Economic Development Conference and director of Economic Development & Tourism for the city of Henderson, said conference attendees were talking about how to position the region to succeed in landing the Amazon headquarters, the Seattle-based electronic commerce and internet company.

“It was great timing that we had this conference on the cusp of an opportunity to present ourselves as a community,” Coffee said. “It reinforces that need to come together on behalf of a purpose.”

The region will work through the Las Vegas Global Economic Alliance in partnership with the state to submit an application to seek out Amazon, Coffee said.

“It will be a fiercely competitive opportunity and everyone will throw their hat in the ring,” Coffee said. “What we will do is challenge to make ourselves stand out. You can’t do it alone. You have to have the cooperation with your state government, regional economic development groups, your communities, private and public sector partners and colleges. Everybody has to come together to make something appealing to a company that’s going to make a huge investment in some community with 50,000 jobs.”

Coffee said “we have a shot as a region” because Southern Nevada has global access with McCarran International Airport. The region gets more than 40 million visitors a year and 5 million come for conferences, she said.

“You have access to face time and customers and companies need and love that,” Coffee said. “We have the cool factor of a relationship with Zappos and Amazon. And we have a culture of entrepreneurship bubbling up in the community.”

In announcing its plans, Amazon said regions of 1 million or more would get priority and suggested those who apply think “big” and “creatively.”

Coffee said Nevada’s proximity to California and having a less taxing environment helps. The region will “play up” that it has no corporate and personal income tax and other issues that “are advantageous to companies of that caliber.” She said Southern Nevada would have the workforce to handle a second Amazon headquarters.

“We can get alignment of training up a workforce coming out of our universities,” Coffee said. “We know a company like Amazon will bring a lot of people with it, and people will choose our region because they chose it. You will see an influx of people coming here because they want to work for that company. I think Las Vegas as a region and all of the respective communities have a chance to shine well in this process.”

Coffee wouldn’t go into any further details about Southern Nevada’s efforts to land Amazon, citing the need to keep their strategy private.

Jonas Peterson, president and CEO of the LVGEA, said it competes for projects at all levels and business headquarters is one of the target industries on which it focuses.

“We believe we have a great product, so we’re currently working with GOED (the Governor’s Office on Economic Development) and our partners in the region to sell the story of what Las Vegas has to offer.”

This is the first year the conference has been held in Las Vegas. The first two years it was held in Reno. Attendees heard from experts in agribusiness, economic development, energy, infrastructure transportation, development, manufacturing, tourism and gaming and workforce development.

One of the speakers was Jim Carroll, a futurist and expert on trends and innovation and author of “The Future Belongs to Those Who Are Fast.” He said there’s a massive number of global trends and Amazon and online shopping is one that’s providing jobs and future economic growth. Robotics and artificial intelligence are part of the story line of the future as well.

Carroll said Northern Nevada landing the Tesla electric car gigabattery factory shows there are no limits of what the state can attract.

“There’s an opportunity here, and Nevada is waking up to the fact that it’s not about agriculture, gaming and tourism,” Carroll said. “There’s a lot of other big trends going on in the world of which Amazon is just one. Why not get into the mindset that we can pursue all of these things.”

Carroll said he speaks at conferences across the country, and there’s going to be a lot of competition to land Amazon and it seems that every state and metropolitan area is going after the headquarters.

“When it comes to Amazon, every jurisdiction in North America wants it,” Carroll said. “It’s going to be a massive competition. It got the attention of every single development group in North America.”

Nobody knows what’s Amazon’s preference is for locating the second headquarters, Carroll said. The company will be looking for skills, incentives and locations. It’s possible executives want a location closer to the center of the country, he said.

“I think first and foremost any region shouldn’t get into defeatist mindset,” Carroll said. “We’re never going to get ahead if that’s the way we think. That’s why I encourage people to start with a positive mindset.”

Carroll repeated that Amazon is only one of what will be many “big new initiatives” and companies that regions can pursue. He said the future will be about batteries, and it’s not just about Tesla’s electric cars but batteries in drones and for utilities and energy.

“Amazon is but one thing of many things happening out there,” Carroll said. “What Nevada needs to do is get the mindset of how do we position ourselves for one of these many things beginning to unfold?”

“We’re going to get to the 22nd century,” Carroll said. “We’re not going back to the 1950s. There are those who say, let’s focus on coal and wave a magic wand and bring back these manufacturing jobs, which are dead gone and not going to happen. If we look at the world of manufacturing, it’s all about robotics and 3-D printing. It’s all about mass customization and about the ability to design products faster and get them to market faster and highly intelligent connected products.”

Nevada is making the right bet focusing on solar and wind energy and microgrids, Carroll said. It’s about the acceleration of energy science rather than coal, he said.

Nevada shouldn’t worry about trying and failing like it did in landing a Faraday Future electric car plant in North Las Vegas, only to have the project stopped before it began, he said.

“There’s a lot of angst about the car plant that didn’t go ahead, and my take is you have to try that,” Carroll said. “Some of that stuff works and some of it doesn’t, but you got to make sure you are out there and hitch yourself to a horse. Sometimes you fall off and have to get up again.”

EDITOR’S NOTE: Vegas Golden Knights President Kerry Bubolz was a key note speaker at the Nevada Economic Development Conference. The Las Vegas Business Press will cover this and feature a profile on him Sept. 25 in the Business Highlights e-newsletter.