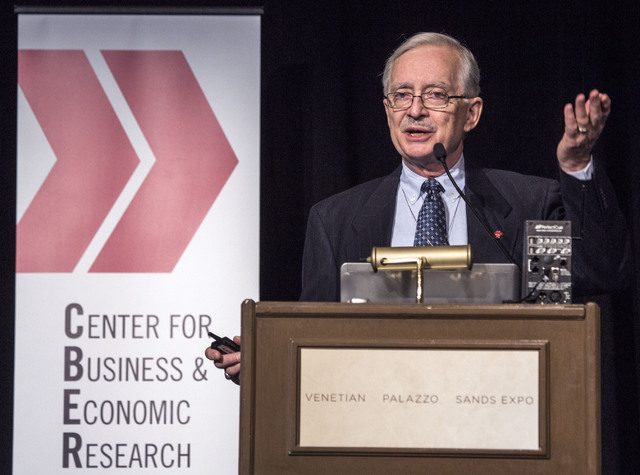 A local and national economist said the Southern Nevada economy is well-positioned for continued growth over the next couple of years but sounded warning signs about a growing federal budget deficit and its negative economic impact over the next decade.

The positive news in a report issued Dec. 6 at the Four Seasons by the Lee Business School and Center for Business and Economic Research at the University of Nevada, Las Vegas shows growth in visitor volume, gaming revenue, hotel occupancy, housing permits, population growth and personal income. The Southern Nevada economy is expected to continue to outpace the U.S. economy, the report said.

“We know construction activity in Southern Nevada is roaring with new projects coming onboard like the stadium project (of $1.9 billion for the Raiders relocation), convention center expansion, Resorts World (casino project on the Strip), school construction and Interstate 11 and Project Neon (freeway construction),” Stephen Miller, an economics’ professor and director of CBER said during an economic conference sponsored by UNLV and the Las Vegas Global Economic Alliance. “For the short term, it’s all looking rosy.”

Miller said the population growth is expected to remain steady at just over 2 percent. CBER is also projecting housing permits will grow at more than 12 percent in 2018. According to CBER, Clark County has averaged 1,100 housing permits a month over the last 12 months

“We’re seeing a return to where we were before the crash — of people from California retiring and moving to Las Vegas,” Miller said.

As for tourism, CBER projects visitor volume will decline just under 1 percent in 2017. Tourism was down slightly after the Oct. 1 mass shooting and that impact needs to be watched closely for any trend, Miller said.

Hotel occupancy will end the year flat and grow by 0.8 percent in 2018 and 0.3 percent in 2019, Miller said. Southern Nevada will fare slightly better than the rest of the state, he added.

“For the next two years, the Nevada economy looks to be on solid ground,” Miller said.

CBER projects the national economy will continue to expand and there’s no threat of a recession. The U.S. should end the year with 2.6 percent GDP growth, Miller said. It should reach 2.5 percent in 2018 and 2.2 percent in 2019.

“There’s no signal of a recession on the horizon and the short run,” Miller said. “This is the third longest economic expansion in (U.S.) history and by May it will be the second longest.”

Chris Thornberg, a partner with California-based Beacon Economics and director of the UC Riverside School of Business, said GDP should end the year greater than 2 percent but suggested no one should be fooled by GDP surpassing 3 percent during the third quarter. It’s due to a surge of inventory and not from spending from consumers and government and will slow down in the fourth quarter. Consumer are spending about 2.5 percent more this year, he said.

Thornberg said any pessimism about the U.S. economy is misplaced, and it’s growing at a “logical pace given the basic realities of the economy.” Some fear a recession will occur because the economy typically doesn’t grow more than seven years, but recessions only occur when there’s a “negative shock” like happened last decade with the housing and banking collapse, he said.

“There’s nothing wrong with our economy. I was able to predict the last downturn, and there were major imbalances that if you looked you saw them,” Thornberg said. “I don’t see that today. The only major imbalance we see in our economy is a political imbalance. That is what’s going on in D.C.”

The one caveat that would damage the economy is a trade war with China, Mexico or Canada Thornberg said. Instead, he said there’s some optimism about the economy with exports increasing and the global economy from China, Europe and Latin America picking up.

“There are a lot of good numbers, and that’s important for Vegas because people from the rest of the world come here and want to enjoy the entertainment,” Thornberg said. “That is a driver of the local economy.”

In light of the presidential campaign a year ago and criticism of the economic performance, Thornberg said it’s “amazing how well things are going,” in the country. Incomes are rising, corporate profits are high, business investment is solid, inflation is low and interest rates are low.

“Labor markets are tight,” Thornberg said. “How many times have you heard every policy we pursue has to be about jobs? We’re running out of workers.”

That tight labor market is one of the concerns that Thornberg said will pose a problem over the next decade. Local economists have talked a shortage of construction workers that’s delaying housing and other projects and increasing their costs.

The solution to the growing labor shortage problem is immigration as outlined earlier this year by the Congressional Budget Office, Thornberg said. Politicians are in favor of not only limiting it but removing 800,000 immigrants allowed to remain in the U.S. under the DACA. or Deferred Action for Childhood Arrivals program, he said.

That would remove young educated people who are being penalized for being brought to this country when they were children, Thornberg said.

“Putting aside the inhumanity, it is insane because we are running out of workers,” Thornberg said. “Let’s be greedy and selfish. We need those 800,000 kids. Immigrants are a solution to our problem.” The labor shortage isn’t the only looming problem with the economy over the next decade, Thornberg said. State and local budgets are stressed, and there’s an underinvestment in infrastructure. There are also concerns about health care inflation, underfunded pensions and entitlements like Social Security and Medicare and a broken tax system.

Thornberg said he’s not against tax cuts, but the ones going through a congressional conference committee will add $1.5 trillion to $2.5 trillion in debt when the national deficit is already expected to increase $10 trillion over the next decade.

With an aging population, Medicare spending will go from 18.6 percent of all federal government revenue to more than 40 percent in 20 years, Thornberg said.

“We’re in the midst of a fiscal disaster driven by public health care for seniors, and we won’t talk about it,” Thornberg said. “Over the next 10 years we will have $10 trillion of new debt created, and we’re not prepared to pay for Medicare and Social Security, and the Republican solution is to cut taxes? I would love to cut taxes but we have to deal with spending first. That’s called being fiscally responsible.”

Thornberg said any tax cuts enacted could be wiped out by the Federal Reserve hiking interest rates to keep inflation in check and preventing the economy from heating and creating a bubble.

“The Fed will have to get ahead of it and that will take away any potential stimulus effort of these tax cuts,” Thornberg said. “They won’t be accomplishing anything but increasing the deficit.”

Miller said the U.S. economy doesn’t need any stimulating at this time but added it could increase GDP and labor participation of those outside the workforce today. He also acknowledged the Federal Reserve is likely to increase interest rates with any stimulus overheating the economy.