Skip to content
Sign up for our newsletter
section-ads_high_impact_1
By Craig A. Ruark Special to the Las Vegas Business Press
February 28, 2016 - 10:05 pm 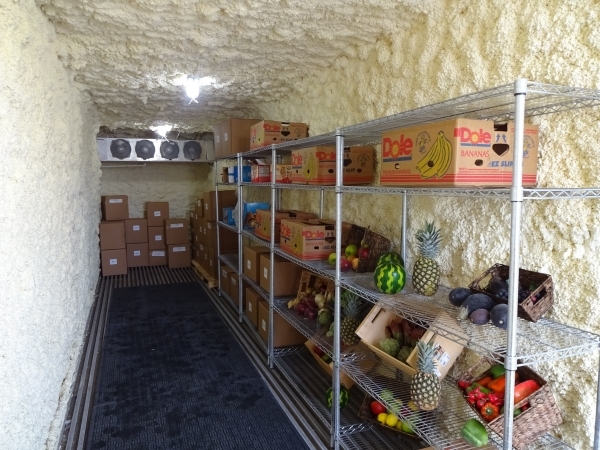 The Adelano ColdBox could reduce food spoilage worldwide, backers say. Southern Nevada is in the running for the manufacturer‘s new plant. Craig A. Ruark, special to the Las Vegas Business Press Feb. 2016

Alfred D. Hollingsworth — or “Coach” as he is referred to by most — is a successful entrepreneur and man of vision.

Soon, his company could be the latest catch of the Governor’s Office of Economic Development which is trying to convince Hollingsworth to locate a plant – and up to 500 jobs – in Las Vegas.

During a presentation at the Switch Innevation Center in Las Vegas, Hollingsworth spoke about his belief that there is a misleading assumption of a food shortage. Quoting experts who estimate that a third of the world’s food supply actually goes to waste and that 40 percent of that food loss occurs post-harvest, Hollingsworth believes the actual problem to be the limited access to storage and cooling facilities.

With a full-size working prototype sitting in the parking lot, Hollingsworth and his team are on a worldwide tour to demonstrate how his product, which relies solely on the sun and a series of batteries to store the energy, can change the way small, underdeveloped communities can preserve their food from harvest to market.

In addition, the excess energy generated by the solar panels can also be used as a power source for his portable modules that condense water molecules in the air to produce up to 50 gallons of water and 120 pounds of ice per day. During the presentation sponsored by the Urban Chamber of Commerce, Hollingsworth acknowledged competitors have units that can produce as much as 1,200 gallons per day, but they require a diesel generator that uses about three gallons of fuel per hour.

According to Nicole Smith, chief operations officer of Aldelano, the company is working on modifications to its product that will significantly increase the water production capacity while continuing to rely on solar and battery power. Smith referred to this advancement as “breaking physics.”

Aldelano Corp. has its headquarters in a 100,000-square-foot office, warehouse, and manufacturing plant in Ontario, Calif. The company’s main business, which began in 1968, is product packaging and its clients include a number of Fortune 500 companies.

The Nevada Governor’s Office of Economic Development, along with the Urban Chamber of Commerce and the Cities of Las Vegas, Henderson, and North Las Vegas, have been courting Hollingsworth to build his new ColdBox manufacturing facility here in Southern Nevada. If successful, it could mean a minimum of 500 full-time jobs for Nevadans.

The actual unit is 40 feet long, transports as a standard shipping container, and is ready to set up with easy assembled solar panels. Current production is one unit per week with 40 employees. Once a new manufacturing facility is established, production will increase to meet the expected demand.

One advantage that puts Southern Nevada in the running is the knowledge base present at the Desert Research Institute (DRI). DRI, a part of the Nevada University System, has a staff of more than 500 scientists and engineers working on projects that involve water and air quality, crop technology, and a host of environmental issues in more than 300 locations around the world. A meeting has been set for the Hollingsworth and his Aldelano team to discuss cooperative opportunities with DRI executives.