Skip to content
Sign up for our newsletter
section-ads_high_impact_1
By BUFORD DAVIS LAS VEGAS BUSINESS PRESS
February 13, 2017 - 8:21 am 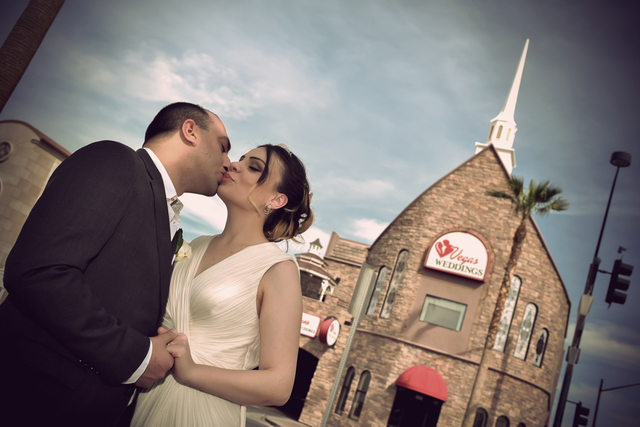 The number of Clark County weddings are down about 40 percent but industry advertising directed at visitors may help reverse the trend. (Photo courtesy of Vegas Weddings) 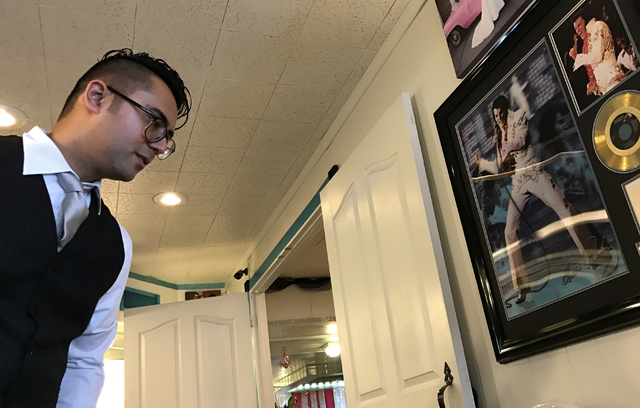 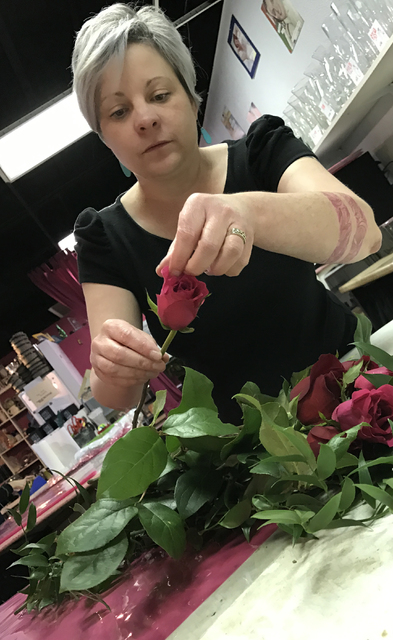 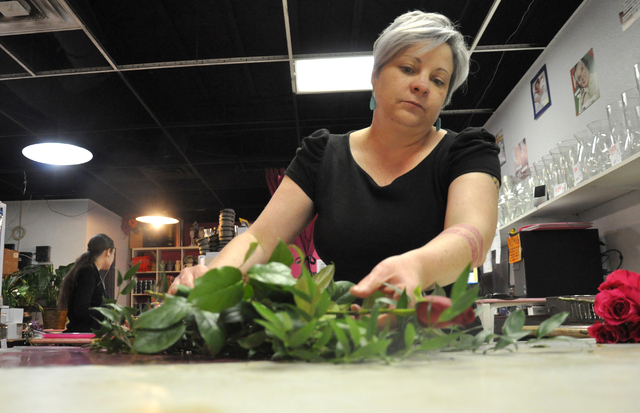 Our brains gorge with dopamine, followed by vasopressin and oxytocin, the hormones that make us feel attachment. That is the body chemistry — biochemists tell us — that equates to romantic love.

Poets and philosophers take a different view, but whether the condition springs from the heart or the head, the network of businesses working to support it is vast — and to them no day is bigger than St. Valentine’s Day.

In 2016, the county issued 81,325 marriage licenses resulting in 79,037 marriages filed. February is traditionally a weak month for weddings in Clark County. Last year the county issued 6,651 licenses for the month — more than 1,000 fewer than October, which saw the most weddings.

But Feb. 14 is different, according to Cliff Evarts, CEO of Vegas Weddings on South Third Street in downtown Las Vegas.

“Valentine’s Day is always a great day for us; it’s better when it’s on a weekend,” he said.

County statistics are in line with Evarts’ assessment. Last year, 360 marriage licenses were issued by the office of the Clark County Clerk on Valentine’s Day, down from 518 on the same day in 2015, which was a Saturday.

The 15-year-old company’s flagship space is a chapel that accommodates 100 guests and features stained-glass windows and chandeliers that hang from a cathedral ceiling.

“One of the nicest things I hear when a customer gets a tour is: ‘Wow, this is like where a normal person would get married,’” Evarts said. “We built this from scratch in 2008.”

“Instead of investing in things that are unrelated, we have reinvested in personnel, in facilities, land, building and equipment. That is the reason for our success.”

Around 8,000 couples a year choose to have wedding or vow renewal ceremonies with Vegas Weddings, but Marketing Director Aimee Stephens said the high volume doesn’t necessarily preclude personal connections from developing between staff and guests.

“We had an older couple (from Detroit who got) married with us last Valentine’s Day, and they were so amazing and fun,” she recalled. “We loved them. We called them the president and first lady. They were so in love, it was just special to be part of their day. They are back in town this Valentine’s and are going to stop by. We are really excited.”

Hail to The King

“We use several different impersonators. People love it. They have such a fun time. We do it for weddings, and a lot of people will use an Elvis impersonator for a vow renewal.”

Michael Kelly performs as one of three Elvis impersonators at The Little Vegas Chapel on Las Vegas Boulevard South, which he purchased three years ago.

“Renewals account for about half our business,” he said. “Most people do renewals with Elvis. It is always great. The energy (an Elvis theme) brings into a renewal is just incredible.”

“We had two women in their 70s get married here not long ago, and two gentlemen, both in their 80s,” Stephens said. “To know they waited for such a long time and to be able to do this, that is very special to see.”

“We get calls from people who ask us if we do gay weddings,” said Lillian Tann, a staff member at The Little Vegas Chapel. “And they sometimes still act surprised when we say, ‘Of course, we do.’”

“Hopefully someday nobody will have to ask that, because it will just be normal,” said colleague Danielle Beck. “Because that’s what it is.”

“We’ve always done same-sex ceremonies,” Kelly said. “The way to make people comfortable is, everything we do is oriented toward everybody — we don’t discriminate toward anybody.”

“Right now we are at about 40 (Valentine’s Day bookings)” said Ron Decar, owner of Viva Las Vegas Wedding Chapel on Las Vegas Boulevard South. “Our accounts are definitely up with the legalization of same-sex marriages.

“We are gay owned and operated, and we feel very comfortable welcoming same-sex couples to our facility. Other chapels may or may not be doing it for the dollar or because they also believe in it.

“My partner and I have been together 22 years and we just tied the knot two years ago when it became legal, but we have been doing commitment ceremonies for 18 years since we opened. There are some chapels, I have heard, that are still turning people away.”

About 45 percent of ceremony booking at Viva Las Vegas comes from vow renewals, Decar said. Along with St. Valentine’s Day, the chapel experiences a swell of bookings for Halloween. “We do crazy themes from James Bond to gothic weddings, Camelot,” he said. “You name it, we do it. Love is in the air.”

The number of marriages performed in the county has declined by nearly 40 percent in the past decade, and Decar believes there is a combination of factors, possibly including the tendency of millennials not to marry early and a lack of a sustained advertising campaign targeting visitors.

“The (Las Vegas) Wedding Chamber of Commerce has now stepped in, along with the city and the LVGEA (Las Vegas Global Economic Alliance) to promote weddings,” Evarts said. “Because we have been the wedding capital of the world and other regions have stepped on our toes, so why not push something we were known for from the beginning.”

Evarts said that despite the overall decline, Vegas Weddings has experienced 15 consecutive years of revenue increases, including 9 percent in 2016.

“We are proud of that record,” he said. “We do about 10 percent of all the weddings in Vegas, so we do a pretty large chunk, and we have about 50 major competitors.”

“We usually see about a 30 percent increase in business in February,” said Edward Wheeler, president of The Love Store, which has three locations in the city. “This year, we expect we could reach 40 percent.”

Wheeler said employees are working overtime to stock shelves with new items for Valentine’s Day, including candles and lingerie, as well as intimates and high-end toys.

The stores have attracted significantly more customers in recent years. Wheeler said he believes it is because of a broader awareness and acceptance of a range of romantic preferences and practices.

“Fifty Shades Darker is coming out, and — whether it is any good or not — that really has changed the way people think about things,” he said. “It has helped us become completely mainstream.”

“People are much more comfortable than even a few years ago,” he said. “We work hard to create that very comfortable environment for the customers.”

He said 70 percent of his customers are women. “Many of our products are the kinds of items you would find at Victoria’s Secret and boutiques of that sort.”

Power of the Flower

“Valentine’s Day is the biggest day in a flower shop,” said Katherine Null, owner of Enchanted Florist, on Highland Drive near Fashion Show mall. “We equate it to the Super Bowl of flowers. There is so much that goes on that day that nobody realizes.”

Null warns prospective customers that order volume is typically so high that the cut-off to receive Valentine’s Day flowers is around Feb. 10.

“We try to make sure that on the 14th, we have (items) that you can come in and buy if you don’t want to go to the grocery store.

“It’s not like ordering a pizza. We will do — I’m hoping — at least 100 deliveries, possibly 150 deliveries on Valentine’s Day. The delivery times are going to have to be very wide. That is the challenge people don’t realize.”

Null said the shop is preparing for the holiday with an order of 2,000 roses, in addition to other flowers.

Throughout the year, Enchanted Florist employs one to two designers and a delivery driver at the daily shop. Those numbers double for St. Valentine’s Day preparations.

“It is always going to be roses,” she said when asked about holiday arrangement trends. “You can’t go wrong with it.”

“If you buy something and want to keep it overnight to surprise somebody with, and can fit it in your refrigerator — that will work as long it is not pushed to the back (where it is often too cold). If you put it in a vase, make sure the water is clean — we recommend changing out the water at least once a day.

Null receives the shop’s flowers from wholesalers who import them from as far away as the Netherlands, Indonesia and Hawaii.

She said the key to successfully navigating the annual revenue fluctuations in the floral business is to be aware of the cycle and plan accordingly. “July and August are usually slow, and December and January can be bad. You just plan for that ebb and flow. You stock away your acorns for that.”