Skip to content
Sign up for our newsletter
section-ads_high_impact_1
By ANN FRIEDMAN LAS VEGAS BUSINESS PRESS
February 23, 2015 - 4:13 am 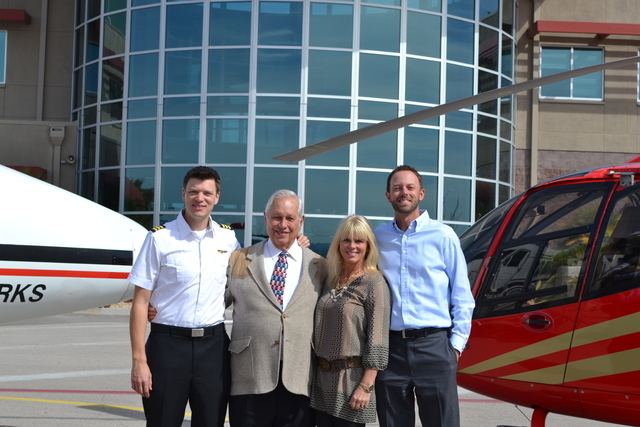 When Elling Halvorson created The Papillon Group, a Grand Canyon helicopter tour company, he never imagined that 50 years later his business would turn into a family affair.

The idea for Papillon was born when Halvorson was working to construct a microwave tower for AT&T on the Echo Summit in the Sierra Nevada. During the project, he purchased a helicopter to carry workmen and light construction materials back and forth over the Grand Canyon.

“They were so impressed by the experience of flying into the canyon; it was almost a religious experience for them,” Halvorson said. “When I saw how everyone was thrilled internally by taking this trip, I saw a business opportunity.”

Halvorson built the company from the ground up and ran it without help from his family until his daughter Brenda joined the company in 1986. Just seven years later, she was promoted to president and CEO.

“I was born into it and I wanted to protect what my dad had started,” Brenda said. “I never thought I would be here but I had the trust of my family and everything came together for me.”

When Brenda joined the Papillon team, Halvorson promised himself he would give his daughter leeway and offer his advice when she asked for it.

“I told myself I would let her make decisions that are important because so many times when families get the next generation involved, they have a difficult time giving them control,” he said. “She stepped up pretty fast.”

Though the company turned into a family business, the opportunity to join the team didn’t come easily.

“None of our family went to work for the business right away,” Halvorson said. “They had to go out and prove themselves and once they did that successfully, we offered them the opportunity to come work for the company. We’re very lucky that we have young people who are good leaders with a good business mind because not every family is.”

According to Brenda, every family member was in their mid-30s before joining the company, including her son Geoff Edlund who became the general manager of the Nevada Helicopter Operations for Papillon in January 2012.

“What I wanted for Geoff was to realize that he didn’t need the family business to be successful and that he could do it on his own,” Brenda said.

Before joining the family business, Edlund was in real estate in Seattle.

“I still have a passion for real estate but I’m learning new things and I’m taking bits and pieces from each profession,” Edlund said. “Seeing how the real world works and proving that I can be successful without the family business has given me confidence.”

Brenda’s nephew, Jake Tomlin, also joined the company in April 2013 as the general manager of the Nevada Fixed Wing Operations.

When Jake and his wife made the decision to resign from the Marine Corps, Brenda invited him to check out the company.

“What pushed me over was my love for aviation,” Tomlin said. “I’d been around it for 11 years prior and I had made peace with the fact that those days were gone but this opportunity was phenomenal.”

According to Halvorson, it’s important in a family business to trust family members and let them make mistakes.

“Let new family members make decisions; they’ll make some wrong ones but that’s part of the learning experience,” he said. “And from the standpoint of the younger person coming in, they’ve got to treat it like it’s their business because it really is in the long run. Us older folks kind of fade away as time goes on.”

Though there are no definite plans to add any more family members to Papillon, the Halvorson family said they’re looking forward to seeing what the future holds.

“I hadn’t thought a lot about it until my wife told me she asked our daughter what she wants to be when she grows up and she said, ‘I want to work with helicopters with my daddy,’” Edlund said. “My heart was filled with happiness.”