Skip to content
Sign up for our newsletter
section-ads_high_impact_1
By STEPHANIE ANNIS LAS VEGAS BUSINESS PRESS
August 1, 2016 - 4:38 am 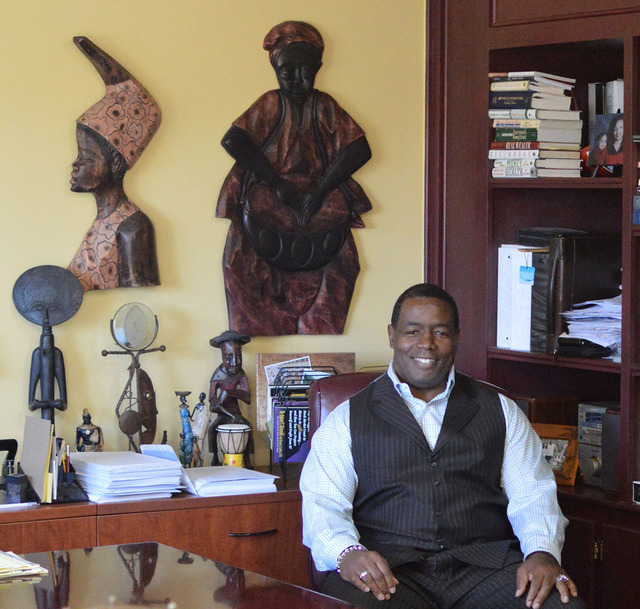 Frank Hawkins is the executive director of two nonprofits, Community Development Center of Nevada and Global Property Management Co. He also owns a general contracting company that he started in 1985 and reopened in 2000. In addition to all this, he is part-owner and executive director of the Nevada Wellness Center, one of the first Las Vegas medical marijuana dispensaries.

Q: How did you go from being in real estate and construction to medical marijuana?

A: A friend of mine, Andre Rhodes, is a retired fire captain from the city of Las Vegas. I recruited him to go to the University of Nevada, Reno to play football. We’ve had a long relationship. Andre came to me and said, “Hey Frank, I need your help on something.” He said, “The state of Nevada is going to pass or has already passed medical marijuana and they’re formulating a process, and I’m interested.” I said, “Well, what exactly is it?” He said, “Marijuana.”

Q: How did you come around to participating?

A: Andre brought the bill over. I told him I’d start to look at it. It took me probably five or six weeks to get around to actually reading it. I did on a plane. I came back and I had some questions. I started calling some assembly folks and senators, asking if it was real and what the plan was. Of course, it was up in the air. They had ideas, but rule-making hadn’t taken place. They had to formulate the policy and procedures. It was going take some months, which was good, because it took us, or me, about a year. I started researching it and looking all over the country to see what was good and what was bad.

Q: What did you learn?

A: Since California had passed it in 1996, before I really understood, we thought California was a perfect place to go to learn. Quickly, we learned that California was the renegade of the medical marijuana industry. So we focused on Colorado and a couple other states.

Q: What challenges did you face?

A: As we moved through the process, researching and trying to figure out what the application was going to look like, how long we’d have to respond, what the requirements were going to be, some of that was en route, but had not been created as policy. When the policies and procedures and application actually came out, they were very different than what was originally proposed.

Q: Why is it so difficult to get a medical marijuana dispensary operating?

A: The state was very strict. Originally, you were not allowed to be able to transfer your license or sell your interest. That, obviously, got changed. The folks with gaming licenses, because of federal gaming requirements, could not participate. That also threw a wrench into the system. Probably the biggest hurdle for the average person, patient, or caregiver who wanted to participate in the process is the state’s financial requirement of $250,000 liquidity. That eliminated a lot of people. The second thing that eliminated people was if they had some type of (criminal) record.

Q: As a legitimate business owner with a lot at stake, did you fear the risk of feds coming in to shut your business down?

A: Oh yes. Without question, there are two things that were very apparent when we started doing our research. No. 1 was 280E, where IRS does not allow you to take tax deductions for our part of the business — medical marijuana dispensaries. It allows you to take very little for cultivation. Right there, we knew we were getting into the business not to generate great profit, but more so to help, because we had family members and knew people whom this medicine was helping.

As more and more states come online, I think ultimately it will happen. Currently, some politicians are using it as a political football.

Q: How are the state and the industry addressing the banking issue?

A: The state of Nevada in the past legislative session approved thrifts, which they thought and believed would help to allow a banking opportunity to come to this business space. I’m involved with a group that has submitted to the state for a thrift to bank medical marijuana businesses. Within that thrift, we’ll also do real estate, gold and silver, small business loans, real estate and construction loans, any and everything related to the individuals and the businesses tied to medical marijuana. Here’s the catch-all, even if the state approves our thrift or anybody else’s bank as it relates to doing business in the medical marijuana space — you still have to be sponsored by an FDIC-approved bank.