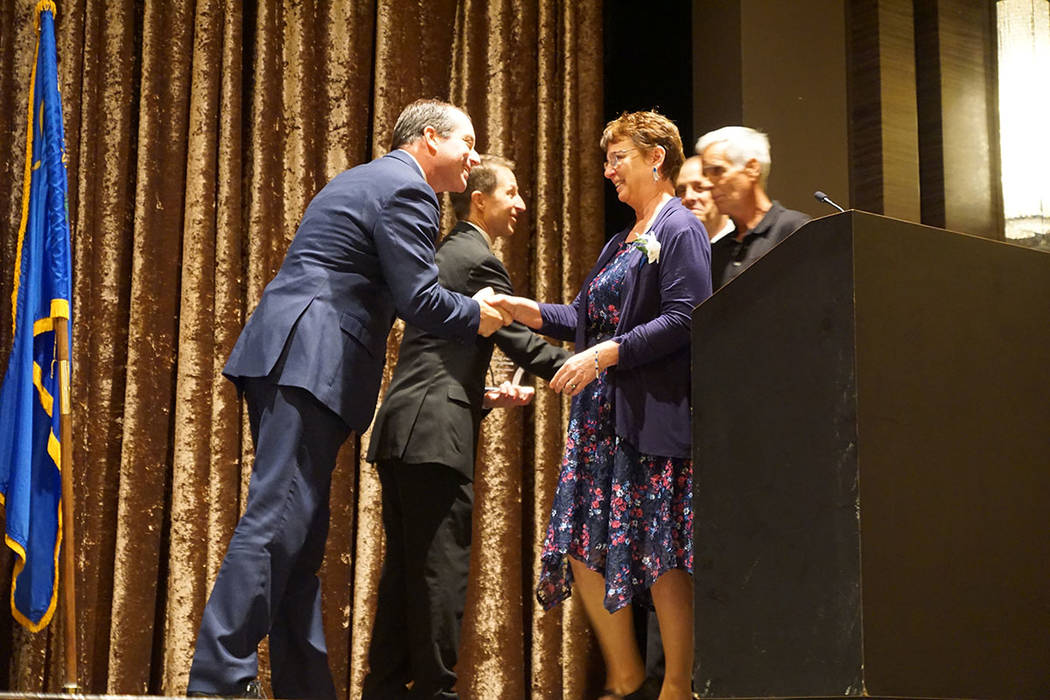 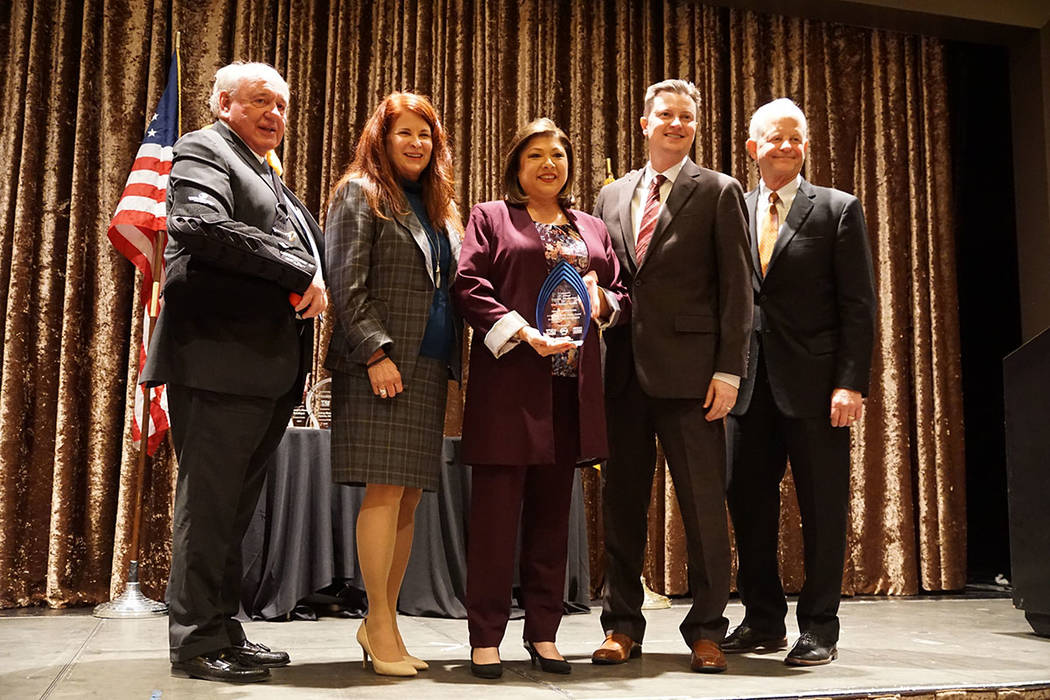 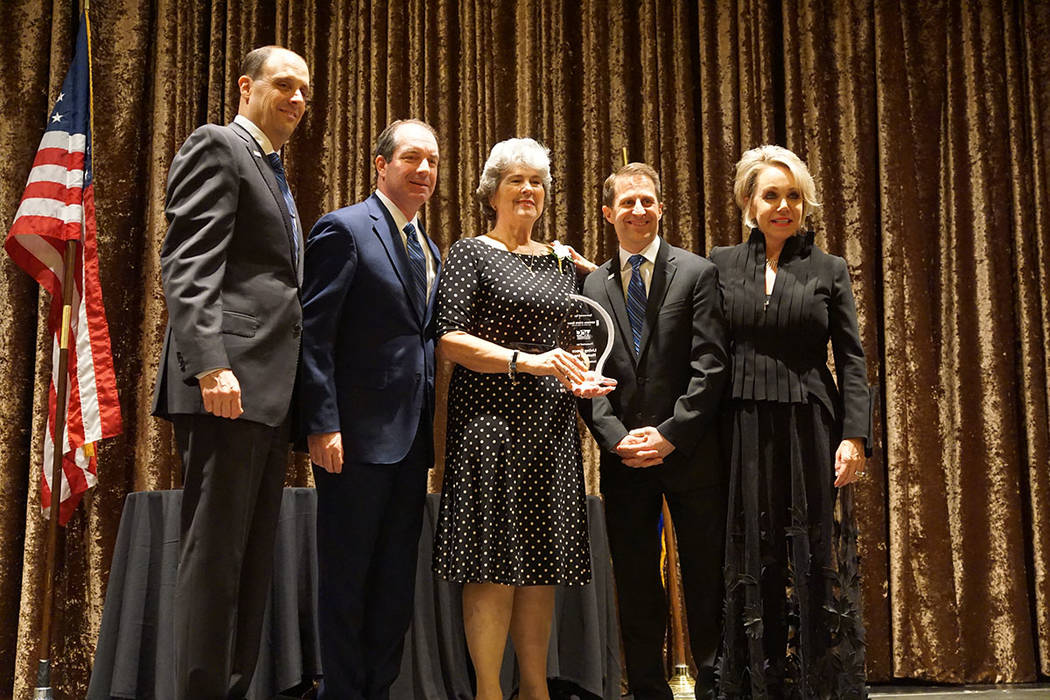 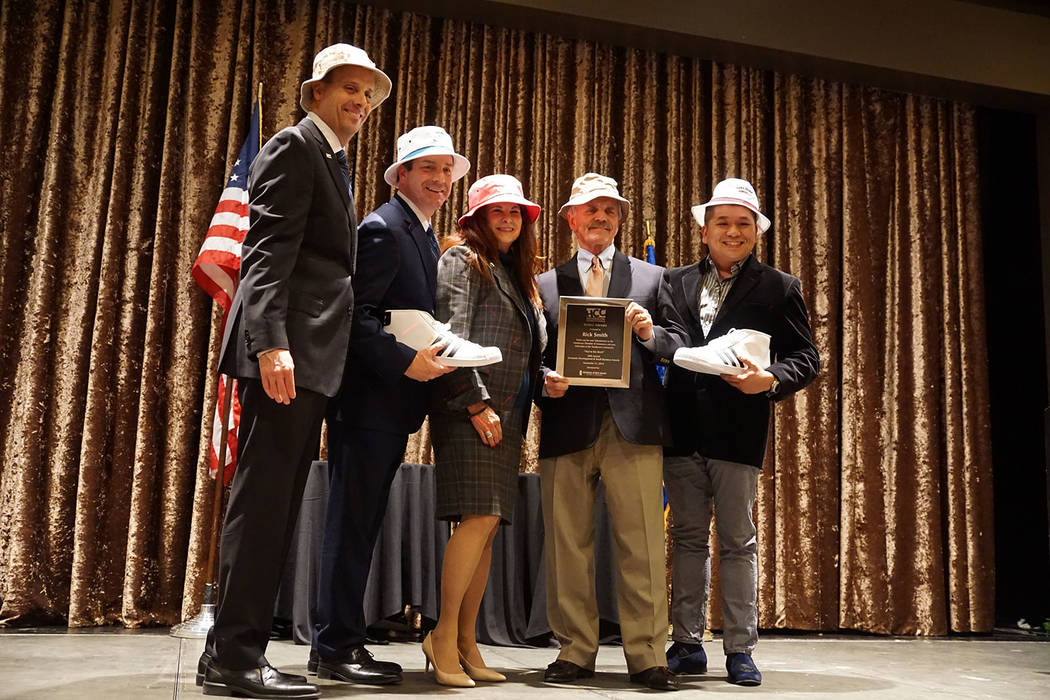 The Raiders’ headquarters and practice facility along with the Google Data Center, both under construction in Henderson, have been recognized as the city’s Economic Development Projects of the Year.

The two projects were honored Thursday as part of the 20th annual ceremonies on economic development and small business hosted by the city of Henderson and Henderson Chamber of Commerce. About 500 people attended the dinner at the M Resort.

Scott Muelrath, president and CEO for the Henderson Chamber of Commerce, said they “like to recognize the larger projects that create the beneficial ripple effect for small business.”

The city’s economic development team in which the chamber partners selects the winners and looks at spending, job creation and tax impact, he said.

“There was a focus on the Raiders’ practice facility in West Henderson and what that represents for that side of the city,” Muelrath said. “And on the east side is the Google project that will probably be a jump start for the technology corridor.”

The Raiders’ practice facility and headquarters near the Henderson Executive Airport came about after the team bought the 55-acre site from Henderson in 2018 for about $6.05 million. It’s investing $75 million in the first phase that will create 250 jobs.

The Raiders will be looking to incorporate public events in the facility, including a cafe open to the public and a 150-seat theater that could be available for special events.

Some developers and analysts suggested the Raiders have spurred additional development or will do so in the future since there’s apartment, housing, retail and other commercial development underway.

“The value that occurs is in the surrounding real estate market from this project but also the types of jobs and rates of the jobs will pay,” Muelrath said. “There’s definitely been a contagious enthusiasm to be in and around West Henderson because of the Raiders’ project. It’s a definite domino project. In the last 18 months, the majority of interest was brought on by the Raiders. It’s the branding of being an NFL city that ultimately paying some dividends in the types of companies and services that are looking to come to Henderson. It’s been a game changer.”

Muelrath said the progress is visible that’s being made on development around the airport and on St. Rose Parkway with retail, speculative industrial projects and larger mixed-use developments coming and with Amazon opening a 600,000-square-foot fulfillment center.

Recently, Henderson approved a development agreement with PEGA Investments as part of selling 279 acres for a multiphase project that includes California-based Haas Automation, a machine tool builder. The entire development is expected to create thousands of jobs.

“I think the Raiders influenced the deal with Haas,” Muelrath said. “You have high-end sports with Haas with their racing team. I think there’s some connect there.”

West Henderson was a spec industrial frontier for the valley, and it’s getting built it with Smith’s distribution and Amazon and Matter Real Estate is building an industrial business park near the airport where the Raiderettes have leased space, Muelrath said. There’s also hangar expansion at the Henderson Executive Airport, he added.

“That can’t be overlooked,” Muelrath said. “The Henderson Executive Airport represents a real economic catalyst for West Henderson. There’s a lot of high-end traffic that comes in and out of that airport, and the Raiders were drawn to that as well.”

Google is constructing a $600 million data center on Warm Springs Road, east of Boulder Highway. It’s designed to serve Google Cloud customers in the West. It’s projected to bring in more than $90 million in tax revenue to Nevada over the next 20 years and the company will hire 50 employees, Muelrath said.

“There’s a lot of legs to long-term growth with the data center,” Muelrath said. “It’s a name everyone associates with technology. It should be a draw as well for other companies, and we’re hoping the city of Henderson can leverage Google’s arrival with drawing like companies to east Henderson.”

Beyond the of the data center and the jobs coming with it, Google has also launched the $1 million Google.org Impact Challenge, which invites nonprofits across the state to compete for grant funding as well as Google’s training and tools, Muelrath said.

Another big winner at the awards ceremony was Dignity Health’s rehabilitation hospital at it Siena campus as the Expansion Project of the Year.

The rehabilitation hospital, which is a joint venture between Select Medical Holdings Corp. and Dignity Health, is a 60-bed acute inpatient rehabilitation that’s part of an expansion of the St. Rose Dominican Siena campus, Muelrath said.

The new hospital is directly adjacent to the existing Dignity Health-St. Rose Dominican. Select Medical is the majority owner in the joint venture and will manage the operations of the new hospital. Since it opened in April, the expansion has already created 150 jobs and has enabled St. Rose to grow its diverse package of health services to include care for patients who have experienced a stroke, brain injury, spinal cord injury, neurological condition, amputation, orthopedic injury as well as other rehabilitation needs.

Rick Smith, president and CEO with RDS Properties won the chamber’s Noble Award. Smith, who has more than 30 years of experience in the California and Nevada commercial real estate markets, has a firm that specializes in investment, development, marketing and brokerage services.

A member of the Henderson Chamber of Commerce board of directors for several years, Smith served as board chair for 2011-2013. He’s former chairman of the National Mixed-Use Development Forum for the National Association of Industrial and Office Properties and is a past president of the Southern Nevada Chapter of NAIOP. Smith is also chairman of the Executive Advisory Board of the UNLV Lied School for Real Estate Studies.

• Juan’s Flaming Fajitas & Cantina won for Redevelopment Project of the Year. It also won the chamber’s Family Business of the Year award. Juan Vasquez and his wife, Darcey, moved to Las Vegas from Oklahoma in 1996. They opened their first location on Tropicana Avenue in 2013 and in October 2018, the family expanded and opened their second location on Water Street in historic downtown Henderson.

• Doug Roberts, a partner with Panattoni Development was named Private Sector Person of the Year. He’s responsible for all aspects of the development of office, industrial and retail projects in Nevada and Arizona. His recent projects include the 770,000 square foot build-to-suit for Petco and a 423,000 build-to-suit for Mary’s Gone Crackers in Reno, a 68,000 square foot build-to-suit for 3G in Las Vegas, and completions of nearly 2.5 million square feet of speculative development in both northern and southern Nevada in 2017 and in 2018 the plans include about 1.2 million square feet in Nevada.

• Gerri Schroder, a project specialist with Workforce Connection was named the Public Sector Person of the Year. She was elected at large to the Henderson City Council in April 2007 and re-elected in April 2011 and 2015, representing Ward I.

As councilwoman, she represented the city as chair of the Southern Nevada Workforce Connections Local Elected Official Consortium, the Southern Nevada Regional Planning Coalition and the Clark County School District Oversight Committee on School Facilities. She served as a council representative on the Commission on Tourism and was a member of the Henderson Development Association and the Henderson Redevelopment Agency. She previously served on the Governor’s Workforce Investment Board Manufacturing Sector Council and the Mining and Materials Sector Council. She is also a member of the Henderson and Las Vegas Metro Chambers of Commerce and the Southern Nevada Child Drowning Prevention Coalition and a former member of the Asian, Latin and Urban Chambers of Commerce. She has served on numerous local boards and commissions including the National League of Cities Board of Directors and past president of the Nevada League of Cities and Municipalities.

• All In Aviation won the Business on the RISE award. The company of Paul Sallach started in 2016. It’s the only Cirrus Aircraft training partner in Southern Nevada and operates as a full-service provider offering flight training, pilot certifications and aircraft rental, sales, management and storage. Along with Cirrus aircraft maintenance partner Lone Mountain Aviation, All In Aviation is developing a 26-hangar facility at Henderson Executive Airport. The first purpose-built, multiuse aviation facility is set to open in 2020. It will create 25 new jobs for the community, grow more pilots in the Southern Nevada market and fill a need for additional aircraft storage not available at the airport, Muelrath said.

• Living Grace Homes won for Outstanding Nonprofit. It opened its first home for homeless pregnant young women in 2007 at a time there was no such refuge in Clark County for 13 years. The county also had the highest teen pregnancy rate in the country. A second home opened in 2014.