Skip to content
Sign up for our newsletter
section-ads_high_impact_1
Story and photo by Stephanie Annis Special to the Las Vegas Business Press
July 24, 2015 - 11:58 am 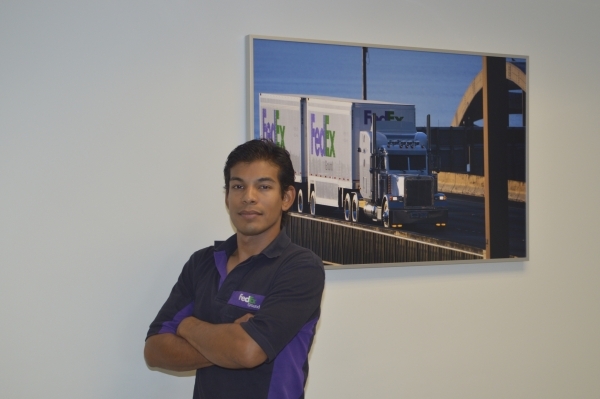 Truck driver Jose Razo, a native of Guadalajara, Mexico, will be representing FedEx next month in the Super Bowl of Safety. (Photo by Stephanie Annis, special to the Las Vegas Business Press)

Truck driver Jose Razo, a native of Guadalajara, Mexico, will be representing FedEx next month in the Super Bowl of Safety. That’s a rare honor for someone who’s not an employee of the company. Razo wears the FedEx shirt, yet he is an employee of Hernandez Corp., a contractor with FedEx Ground.

His expertise driving a truck is unmistakable — he has captured the state step van title the past two years..

Razo came to the United States when he was 2 years old and was raised in Southern California, where he graduated from Torrance High School. He said that his father taught him to work hard and his mother taught him to do things right the first time. To them, he credits his success.

Razo is in his mid-20s and has two children. He recently achieved his goal of purchasing his own home.

Since he was 17, he has been studying to be a pilot. It’s his pilot training, he says, that showed him pre-trip inspection is the key to safety.

Razo explains his company goes above and beyond the FedEx standards by providing additional training including “one-on-one training, one-on-one verbal, on the road, and not just driving; how to lift a package, that’s part of safety.”

In addition to repeating as step van champion, Razo, representing FedEx Corp., finished in the top 10 overall at the 2015 Nevada State Truck Driving Championships in Sparks on June 13. Next, he will compete in St. Louis at the Super Bowl of Safety nationals Aug. 11-15.

While Razo said the competition is fun, he is all business. “The point is to show; we have a safety program.” It was Razoâs second win at the state level.

Q. What is important for people to know about the attitude of driving?

A. I’ve competed five years. The thing that I liked about the competition was once youâre a driver, there’s a misconception of “Oh I’m a professional driver; I’m better than everybody else,” and it’s the complete opposite. When I first started, I was young; I wasn’t a bad driver, but I was in that little bit of a percentage that thought I was better than everybody else. A year later, when I competed, I realized it was a big picture. It’s a lot more than just being able to show off how close you can maneuver.

Q. What has competing in this competition taught you about safety?

A. It’s more about judgment — making the right choices, making the safe choices and sharing the road. It’s about more than just driving this truck correctly.

Q. What is the experience you see most often with new drivers who attempt this safety course?

A. They think they know their vehicle and the competition makes them realize that they’re not 100 percent there, that they need to work on it. It makes them get better at their driving skills. That’s one thing (the course teaches); the other thing I think is really important is the pre-trip. That’s one thing, from day one, I practice every day, thoroughly. I try to get others involved because something like that can prevent an accident.

Q. What do you feel you’ve learned through participating in this safety competition?

A. Two things really — one, how to use better judgment and, two, how to inspire other people to participate and help them out. It’s really getting them involved, helping other people who are having problems with their skills and driving. Iâm right there to help them out.

Q. How has participating in a safety competition improved your safety skills?

A. The competition’s made me a better driver. My skills got better; my knowledge of the driving community and the trucking business got better; and so I was able to make better judgment calls. I know I can back up a truck, zigzag it through a bunch of cars, but the better thing to do would be just park the truck and walk the box. I know I can do it, but why risk it.

Q. What are you expecting at the nationals Super Bowl in August?

A. I’m expecting a challenge. Last year, when I won (at the state level), I was happy, and then when I went to nationals, it was challenging because I was going up against guys that were at a higher caliber, and so I’m expecting that this year too: a challenge and a really having a good time.