Skip to content
Sign up for our newsletter
section-ads_high_impact_1
By Valerie Putnam Special to the Las Vegas Business Press
February 22, 2016 - 5:05 am 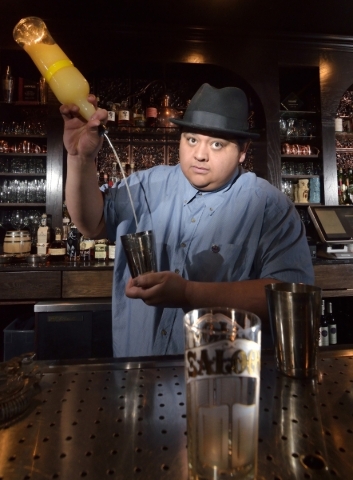 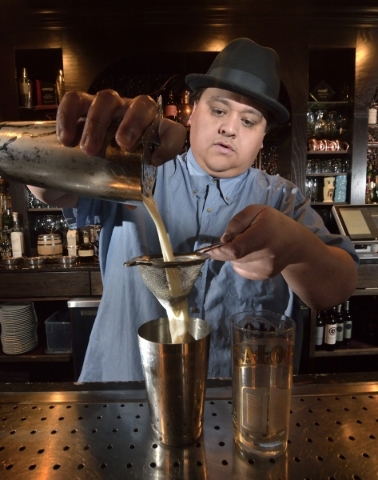 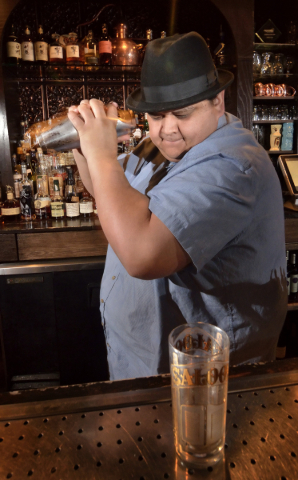 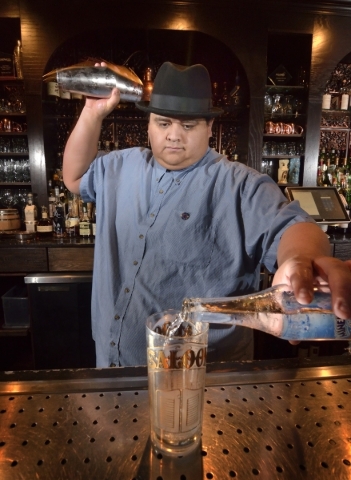 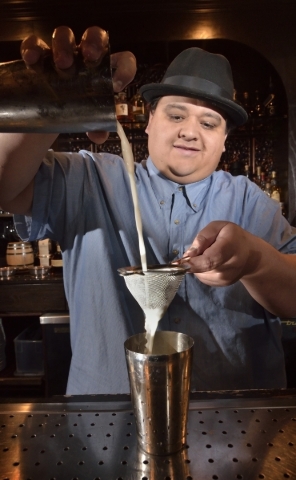 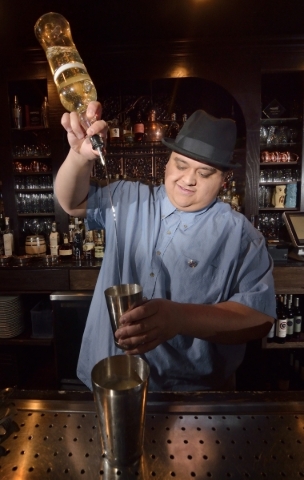 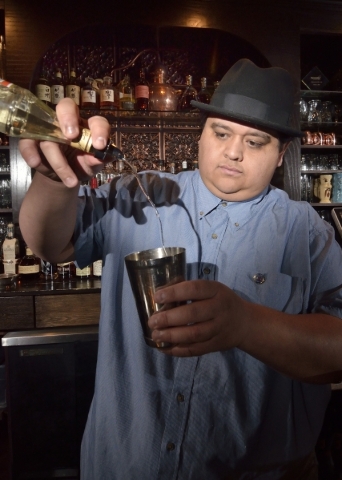 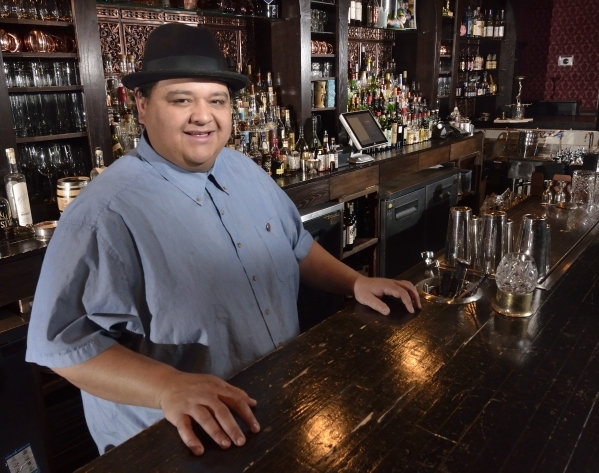 Nectaly Mendoza, owner of Herbs and Rye, is shown at his bar and restaurant at 3713 W. Sahara Ave. in Las Vegas on Wednesday, Feb. 10, 2016. Bill Hughes/Las Vegas Review-Journal 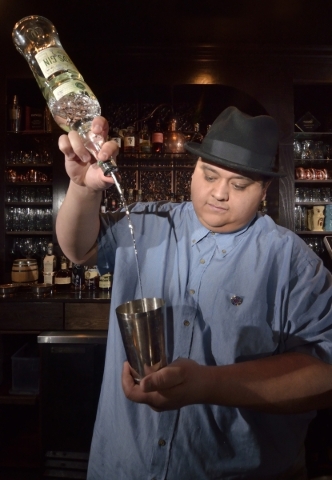 Nectaly Mendoza, owner of Herbs & Rye bar and grill on West Sahara, developed his unique perspective on business and motivating people from a variety of mentors in his life.

“It’s not just about how great the cocktails and food are,” Mendoza said. “It’s understanding how to motivate people to have passion and dedication. They have to know you are as dedicated to them as they are to you.”

Since opening Herbs & Rye during the recession, Mendoza has applied the lessons learned to grow the business from five employees to 36. The business has received tremendous industry recognition, winning 32 awards in 2015 and 37 in 2014.

Recently, during the National 2016 Nightclub & Bar Awards, Mendoza was recognized as Bartender of the Year. He credits his entire staff for the recognition.

“I called every one of my guys, told them I loved them and this was for them. This was an award for our team,” Mendoza said.

Besides bartending, cooking and operating his business, Mendoza travels all over the world to help business start-ups, conduct educational seminars and judge drink competitions.

Q. How does winning Bartender of the Year affect your business?

A. We are very busy. People come in and ask about it all the time. The out-of-towners want to go to where the best bars are, so they come here. Locals love the fact somebody from Las Vegas won it and are very proud of it. I do see they support it in that way.

Q. How did you get into the industry?

A. My career as a whole was a big fluke accident. I was 17 years old and in and out of trouble. A close friend of mine, who got a job at the Bellagio as a busboy, told me to call the same lady who hired him to see about a job. I called her 30 times and she finally gave me an interview. I was scheduled as the first interview. At 8 a.m., I walked in wearing Dickie pants, Doc Marten boots, suspenders and a belt while everyone around me was wearing suits.

I didn’t do well during the interview. After the interview, she told me to sit there and she’d be right back. So an hour passes, two hours. I knew she had to come back because her purse was in the room. Long story short, nine hours later she comes back. She had forgotten about me. As I’m leaving, she grabs me and apologizes. Everything happens for a reason and she gives me a job as a glass polisher at a restaurant in the Bellagio. The bar was run by Michael MacDonnell, who became my biggest teacher in life. He created the foundation and blueprint of my career. That is how I got into the beverage world — being forgotten in a cubical.

Q. What inspired you to open Herbs and Rye?

A. Herbs represent the kitchen and Rye represents the whiskey. I wanted a place people can go to get great food, great cocktails and not pay a fortune. I’ve been to great restaurants where the cocktails aren’t good and I’ve been to a cocktail bar but the food isn’t good. I wanted an equal balance between the two. A local place where people leave feeling the experience was worth it and they would return. We have customers who come back three to four times a week.

Q. I understand the opening of Herbs and Rye during the recession presented some challenges. How did you make it work?

A. We opened Dec. 15, 2009, my mom’s birthday. We were in the largest recession the United States has ever seen. Some people looked at that as a negative but I saw the positives. I saw this is my chance to get something for a good price.

There were five of us when we opened. People didn’t grasp the concept of the business and we had a tough time. After we opened the restaurant, my brother got ill and passed away from cancer. I also had a very close aunt pass away. Everybody knew everybody so we were all going through this together.

Those people were so dedicated; they would stand on Sahara and hand out fliers about the business.

We put everything in to the business. I sold my car to pay the payroll. Two cooks, who are still here, didn’t cash their paychecks. They said, “If you don’t make money, I don’t make money.” You can’t buy that kind of loyalty.

My family pulled me aside, “When’s enough, enough? You got to let this go.” I told them I am not giving up, as long as the lights are on and the ice is cold, we are going to keep going. That’s what we did. We had some long nights. We would unscrew some of the light bulbs to conserve energy.

I think a lot of people in business think money drives the business. It’s not. It’s the loyalty and passion of the people in the business. I was surrounded by people who honestly cared. They drove the place to success. It wasn’t me, it was them. I’m merely one face to all of this.

Q. How do you distinguish yourself from your competitors?

A. I’ve been asked several times, “How do you separate from the other bars?” It’s real simple: we don’t. I do what I do best and I let everybody else do everything else. I don’t look at it as a competition. I compete with myself and who I am as a person every day. I try to improve myself every day. We’re not stuck in this race to try to be the best in everybody else’s eyes. That’s what makes us different.

Q. What do you attribute your success?

A. I don’t know if we are successful yet or not but I do know we are happy. I consider my employees family. I don’t pay my employees; they pay themselves. I just distribute the money. What drives our business are the people. They are the heart and soul of this company. Thirty to 40 percent of our reservations requests a server by name. When you have guests coming in and asking for specific cooks who work in the back, you know you’re doing something right.