Skip to content
Sign up for our newsletter
section-ads_high_impact_1
By Susan Stone Special to the Las Vegas Business Press
April 20, 2015 - 3:00 am 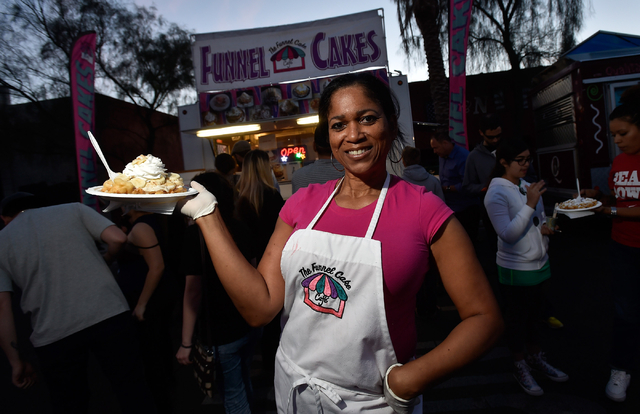 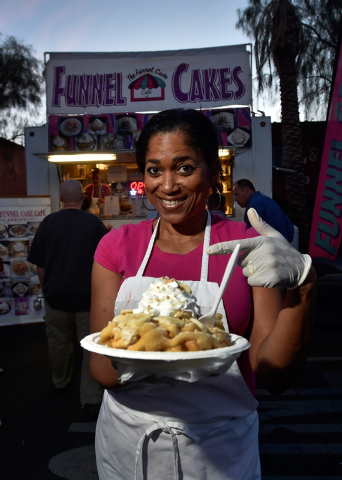 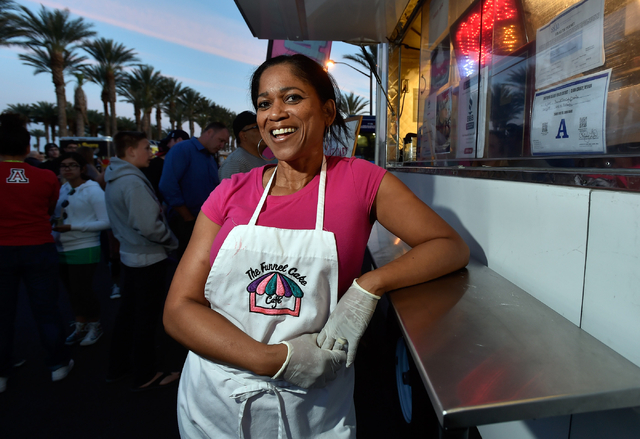 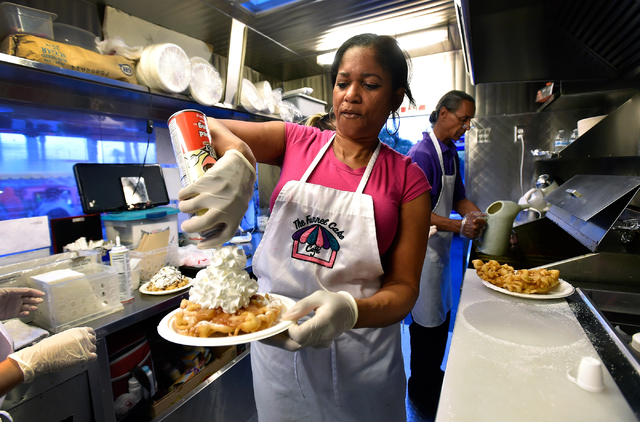 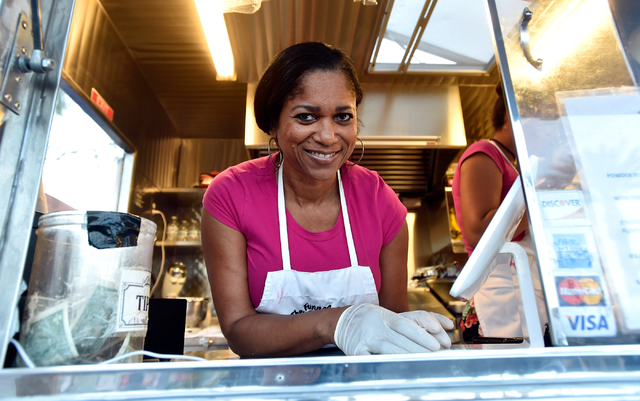 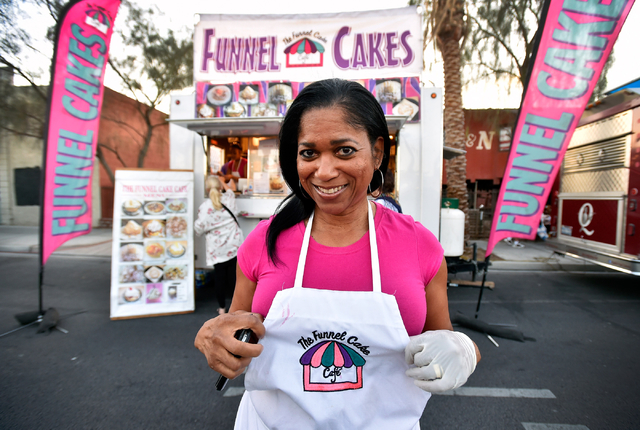 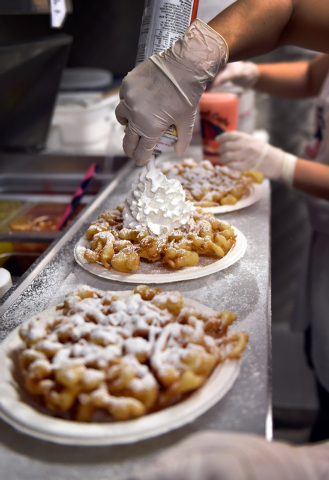 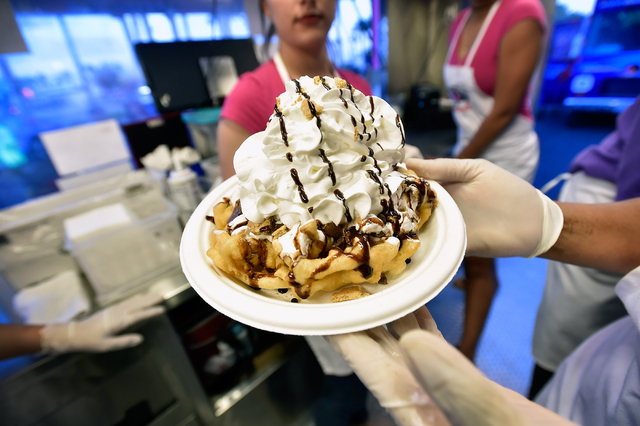 In 1995, Denette Braud migrated to Las Vegas to escape Southern California’s deteriorating economy. Twenty years later, she owns an award-winning dessert business, and was recently recognized as a community leader by the Urban Chamber of Commerce.

Las Vegas Business Press sat down with the soft-spoken entrepreneur and discussed her path to success, and plans for the future.

Like many Americans raising families, Braud worked at a part-time business to supplement her full-time job earnings while living in California, but after losing her finance job at Union Bank, the side work became the main income. Selling clothing brought her to Las Vegas frequently.

Starting from scratch in the desert, she landed a sales job at KFMY 93 radio where she worked for 16 years.

“Radio was fun, but then it became really corporate,” she said. “I worked really, really hard and then got hit by the recession. So I went from making really good money to making hardly any money.”

During her tenure in radio sales, she began to ponder her next venture.

“My mother and I brainstormed. We had done clothing before, but we felt like everywhere we went, people were always eating,” she said. “So we decided on food.”

They narrowed the concept down to funnel cakes, which she had first encountered at Knott’s Berry Farm. She loved the cakes, plus no one else was offering them.

They started searching for outdoor festivals where they could sell their cakes.

“The biggest challenge was finding places to set up. That’s why we weren’t that serious about it,” she said. “Las Vegas barely had any events.”

They started showing up with a pop-up tent and tables. Later, they invested in a travel trailer with kitchen equipment, which they transport to various venues. Their first big event was the Taste and Sounds of Soul festival downtown.

“It was a risk. My husband was working, but we took a risk and gave up a big chunk of our combined income, but that was the challenge … it means you’ve really gotta hustle,” she said.

It may have been in her blood, she said, explaining that her father owned a record store, burger stand, and wholesale sausage business.

“My Dad was an entrepreneur, but back then, they didn’t really teach the kids,” she said. “He did his thing, to provide for the family, but we never really learned, except by trial and error. I just did it, no classes, nothing.”

Luckily for Braud, she had a couple of years to practice her food service skills before the food truck trend hit Las Vegas.

“We didn’t have a whole lot of places to sell,” she said.

So, she kept her sales job until 2011, when she “struck out on faith” that she could make it a viable business.

“I knew if I could focus on this, I could build it,” she said.

She didn’t have a business plan, because she was thinking it was a fun business, but not a long-term business. “It’s been a real focus of mine for the last three or four years.”

Funnel Cake Café won a coveted spot at last year’s Life is Beautiful Festival, which it plans to work again this year. And the company is a fixture at First Fridays downtown.

“We had a ton of good comments,” she said. “And I think it’s awesome considering we don’t have a location.

“As the food trucks became more popular, there are more food truck events as well,” said Braud, adding that the trend has propelled her to seriously seek out opportunities.

The company does private parties including the (Station Casinos owners) Fertitta family’s Christmas party and school events. The company has done corporate events for Reebok and Big 5 Sporting Goods, and sometimes carefully package and deliver treats directly to the clients’ locations.

The company has expanded by adding more toppings. Traditionally, strawberry was the go-to topping, but now Funnel Cake Café offers up to 15 choices, including bacon, banana split, and peach cobbler.

“That’s what makes us unique is nobody else is offering the toppings we have.”

It’s a family business, with her 73-year-old mother, husband, and children working along with three “regular” part-time employees.

“Denette is to be commended for her diligent efforts to educate and position herself and The Funnel Cake Café for success,” Urban Chamber President Ken Evans said. “She is not afraid to take calculated risks; in fact, she welcomes and actively pursues new challenges and opportunities in order to grow her business. She is indeed a role model for what it takes to be successful as an entrepreneur.”

Braud praised the Urban Chamber for helping her take her business to the next level.

“It’s been a big help,” she said. “They’ve given us a lot of meaningful contacts, and offer great classes.”

Social media plays a big role in the company’s growth, she said. “I’ve built it over the years. I’ve branded FunnelCakeCafe.com; we have our logo and people see it at First Friday.” She runs social media contests and awards prizes to customers who get the most “likes” for photos they post with a cake.

There are sometimes funnel cake competitions at First Friday, she says, but her customers recognize the difference, despite the competitors copying certain elements.

“I try different one each time, but my favorite is strawberry with vanilla ice cream,” said Marina Killian, a loyal customer originally from The Bronx, N.Y. “It took me back to Coney Island. I was happy when she brought it to Las Vegas. The first time I tried it, I was sold.”

She is impressed that it is a family-owned business, and the service is very good. “They never let me down,” Killian said. “I have sent several friends to try it.”

Braud is focused on opening a brick-and-mortar store to capture missed opportunities. She is scouting microspaces and retail locations. “Wherever we go, we’ll be a good draw,” she said.

Once that is in place, she wants to turn the business over to someone else.

“I have an exit plan. I don’t want to do this forever,” she said.

Her goal is to share with young business people her strategies for success, starting with her children.

“What I would like to do is take young adults, especially those who think they could never own their own business, and teach them how to run it,” via a franchise opportunity. “My kids will be the first ones,” she said, of her son and daughter who are ages 31 and 32.

She offers this advice for new business owners: “Don’t give up. And I know people hear that all the time, but I’ve seen people go into small businesses, and if it doesn’t work like this,” she snaps her fingers, “they give up if it doesn’t work out in a year or two. That’s not enough time. We’ve been doing this for years, and it’s just now taking off.”