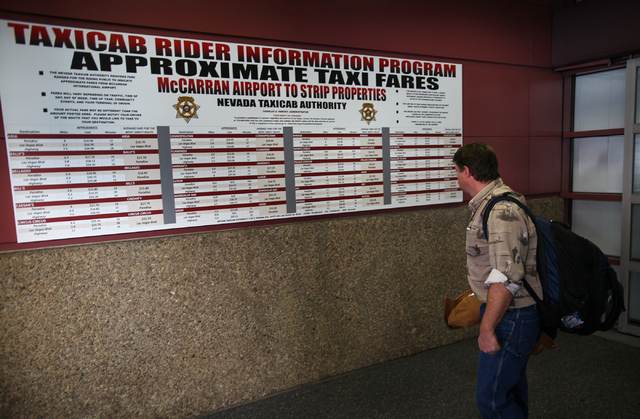 Southern Nevada’s taxi industry continues to deal with the black eye of long-hauling, the illegal practice of taking a passenger in a cab on a longer route than necessary to generate a larger fare.

The practice is so notorious that stories that were disproved years ago continue to surface and dog the honest drivers out there who play by the rules.

Long-hauling remains a problem regulators must stay atop, and Nevada Taxicab Authority administrator after administrator has taken steps to enforce the state’s laws and regulations against the practice.

But at a recent authority meeting, the four board members — there are supposed to be five, but it’s been nearly a year since anyone has been appointed to fill a vacancy — realized that some tweaks may be necessary in the long-hauling regulations to better help the public understand what it is.

After that meeting, it’s unclear whether everybody involved is on the same page.

Most long-hauls occur from McCarran International Airport where a passenger requesting a ride to a Strip hotel-casino may come across a driver who will get to the destination by going through the runway tunnel to access Interstate 15, getting to the Strip by one of the exits off the freeway. The taxi industry rightfully notes that not every cab ride through the tunnel represents a long-haul, but nonetheless, passengers have now become suspicious of any cab ride through the tunnel.

The distance between the airport and most resorts via the tunnel is longer than the most direct route and can result in a fare that is $5 to $10 more than the short way.

Here’s the problem: A taxi meter calculates both distance and time. If a cab gets stuck in traffic on surface streets, it may cost more to go the shorter route than through the tunnel.

That point was hammered home in February’s Taxicab Authority meeting when a Vegas Western driver, Samuel Fekele, appealed a citation he received for long-hauling a customer — a customer who turned out to be an undercover enforcement agent.

Fekele didn’t even use the tunnel when he got nailed.

The driver picked up his customer at Excalibur and was directed to go to Circus Circus. The most direct route to Circus Circus is to take Las Vegas Boulevard. But Fekele, a longtime driver, knows about late-afternoon Strip traffic and opted to take the back-of-the-house route along Frank Sinatra Drive and Industrial Road. According to the officer’s report, the most direct route from Excalibur to Circus Circus is either 3.2 miles or 3.7 miles, depending on the starting and ending point. Fekele’s route went 4.1 miles — not a really egregious long-haul, but deemed by the officer as citation-worthy.

In Fekele’s appeal hearing before the board, he explained that he knew that if he took the Strip, the fare could be higher because there was a lot of traffic in town for a concert.

Fekele should have informed the customer of the longer route and his reasoning for using it. If a customer approves a longer route to avoid traffic, it’s no longer an illegal ride.

The board unanimously approved the appeal, but not before discussing possible tweaks to the long-haul regulations.

“I don’t want to put out the message that long-hauling is acceptable,” board member Dennis Nolan said. “But we do need to look at the interpretation of what ‘longer’ means.”

The statute defines long-hauling as taking “a longer route to the passenger’s destination than is necessary, unless specifically requested so to do by the passenger.” What does “longer” mean in this case? The distance? The time?

The board noted that when the rules were drafted in the late 1960s, distance was top of mind because there wasn’t as much traffic and getting from one place to another was a breeze. That’s no longer so, but the regulations have never been updated or clarified to meet today’s traffic standards.

During his time as administrator, Harvey published an online long-haul database listing violators by their driver numbers, an identifier all drivers must update through periodic checks.

Drivers found guilty of long-hauling will see their numbers on the database. Prospective employers can find them, too, and their appearance there may prohibit them from getting a job with another company.

When Harvey left, Gov. Brian Sandoval appointed Tom Ely, a captain with the Department of Public Safety, to serve as an interim administrator.

In his short tenure with the Taxicab Authority, he has re-emphasized the need to enforce long-hauling regulations as a consumer-protection tactic and to preserve the industry’s image.

Ely submitted a Taxicab Authority budget that requests six new compliance and enforcement investigators to join the 29 on staff. Last year, the authority noted 4,238 violations and wrote 3,419 citations, including 994 for long-hauling.

The revenue generated by those citations totaled $356,196. The agency is self-sustaining because besides collecting citation revenue, it takes in trip charges for every ride and fees for medallions and permits issued.

Authority board members expect the review of regulations and the potential tweaking of the language to occur over several months.