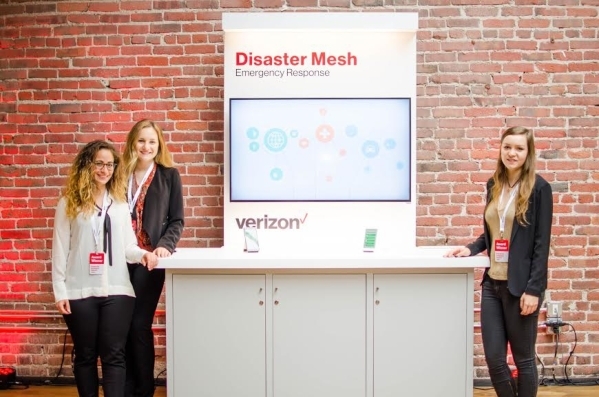 A team of three teen entrepreneurs who developed an idea for emergency communications won $250,000 in an innovation competition sponsored by Verizon. Left to right are Karla Dana, a student at Stanford University; Katelyn Dunn, senior class president at Bishop Gorman High School, and Margaux Giles, a student at Long Island University. (Courtesy)

Katelyn Dunn, senior class president at Bishop Gorman High School, teamed up with two other students at a summer program at Singularity University in Moffett Field, Calif., to tackle one of the world’s greatest problems.

“We felt for the victims of natural disasters and after hearing some personal testimonies from them, they said the most important thing wanted was communication with their families,” Dunn said. “From there, we bounced some ideas off our mentors to see what was doable.”

Dunn, 17, and her co-founders, Margaux Giles, a student at Stanford University; and Karla Dana, a Long Island University Global College student; came up with Disaster Mesh, an air-deployable, wireless mesh network to create lines of communication during a natural disaster.

“We drop it from an airplane and there are access points that help create an instant network,” Dunn said. “We’re also able to collect information from them as to what the needs are in a particular area.”

Instead of leaving the idea for Disaster Mesh at the door when the program concluded last summer, Dunn and her group heard about Verizon Wireless’ Powerful Answers Award, a challenge that encourages entrepreneurs to provide influential technology solutions.

“We decided to apply for the disaster relief section of the challenge because we had nothing to lose,” she said. “We had to grow up a lot more than we’d been forced to in the past because we had to submit marketing strategies and a business plan, which we didn’t have.”

Shortly after applying, the group received word that Verizon Wireless wanted them to pitch their idea for Disaster Mesh alongside 11 other entrepreneurial groups in San Francisco to compete for cash prizes of up to $1 million.

“It was awesome and there was an incredible group of people there,” she said. “They really wanted to make a change in the world.”

“The funding will be used to build out prototype because the one we have was made by us with off-the-shelf parts and we’re not engineers so we’re going to bring in engineers to build a better prototype,” she said. “We want to build this in order to get closer to testing and make it a reality.”

In addition to taking the necessary steps to make Disaster Mesh a reality, Dunn said she and her co-founders plan to enter more competitions in the future.

“While we’re still running on the high from the Verizon competition, we’d like to build a better prototype to bring with us to other competitions,” she said. “We’re going to take this next period of time to focus on building.”

Eventually, Dunn said, she’d like to implement a business plan for Disaster Mesh.

“We’d like to sell the disaster mesh service to disaster relief organizations or national programs like Federal Emergency Management Agency,” she said. “We’d like to be able to implement this around the world and make some serious change.”

Though the Disaster Mesh co-founders are spread out across the country, Dunn said that won’t impact their ability to get the product off the ground.

“Though we knew it wasn’t going to be easy, we knew we could do it and whatever we can do to keep in contact we do,” she said. “I hope that we’re not only able to take this across the country but internationally as well and that it becomes helpful because that’s all we’ve ever wanted it to be.” 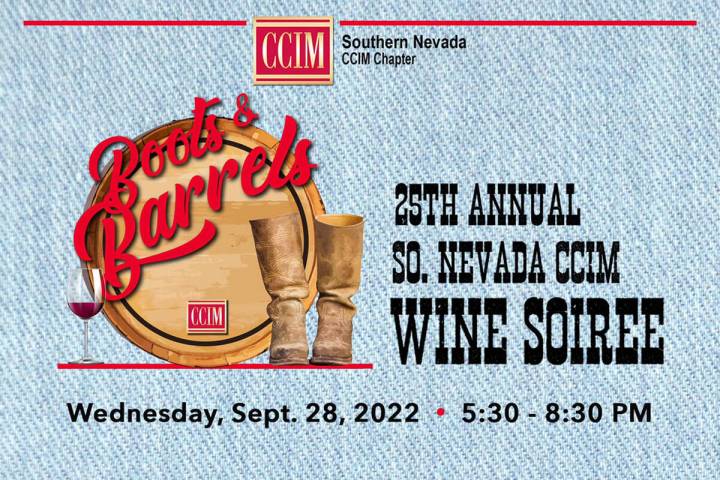 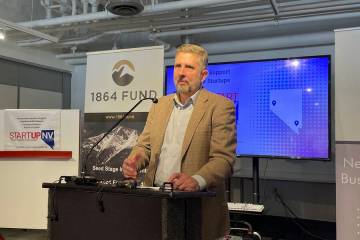