Skip to content
Sign up for our newsletter
section-ads_high_impact_1
By Chris Sieroty Special to Las Vegas Business Press
July 6, 2015 - 3:00 am 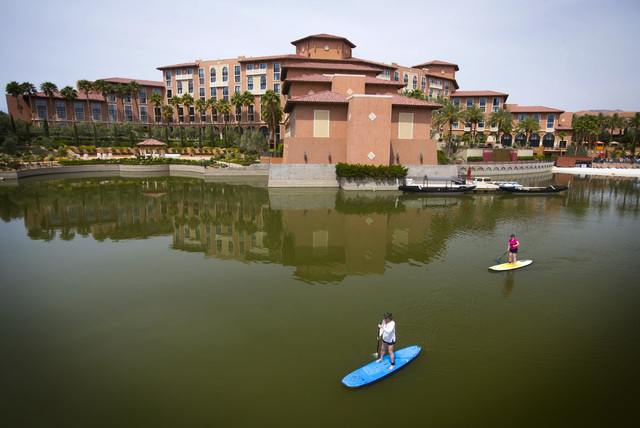 Lowes Lake Las Vegas, a hotel within a luxurious but financially troubled golf community and resort 20 miles from the Strip, continues to struggle as the multimillion-dollar loan backing the property goes through another reappraisal, according to Trepp LLC.

That loan is expected to be sold at a loss, the Trepp report said.

The current interest rate on the loan is fixed at 5.726 percent. Trepp identified the loan special servicer on the property as Bethesda, Md. –based CWCapital Asset Management, while the master servicer is a combination of Berkadia, Midland Credit Management and Wells Fargo &Co.

In March, Trepp, a New York-based commercial real estate and banking research firm, found the 493-room Westin hotel in Henderson had its original appraisal of $181.7 million reduced to $117 million.

The property, which was built in 1999, averaged 54.7 percent occupancy last year. According to the 21-page Trepp report on the property, the Westin posted revenue of $23.7 million last year, but total operating expenses were $25.7 million.

“The property is in good condition,” said a special servicer commentary for June that’s included in the Trepp report. “The effects of the new flag are slowly making their impact … and the hotel is budgeted to break even in 2015.”

For the 12 months that ended April 30, the Westin Lake Las Vegas occupancy rate was 57.1 percent, while the average daily room rate was $116.07, and revenue per available room stood at $66.29. This represents a 9.5 percent increase in RevPAR year over year and a 37.2 percent increase over the last two years.

“The Lake Las Vegas market is starting to show signs of recovery as well,” the report said.

The former Lowes Lake Las Vegas was transferred to special servicing in March 2009 for imminent default and became REO, or real-estate owned, in March 2012.

The hotel was converted to a Westin in that same month.

“By issuing an appraisal reduction for the full amount of the loan, the loan’s special servicer is stating that the loan will be sold off at a loss,” Barrie said in an email.

Trepp noted the sale of the loan is expected sometime in the second half of the year.

Barrie wasn’t surprised by another appraisal of the loan . He said appraisals of loans “in distress are done as a method to understand a potential loss if the property is sold.”

Lake Las Vegas had three golf courses, two luxury hotels, a casino and a lake in the middle of the Southern Nevada desert. It filed for bankruptcy on July 17, 2008, in the midst of the nation’s housing market collapse.

At the time of its bankruptcy filing, debts for its owner, Lake at Lake Las Vegas Joint Venture LLC, were estimated at $500 million to $1 billion.

Two years later it emerged from Chapter 11. Although Westin operates the former Lowes hotel, the Ritz Carlton closed during the bankruptcy and is operating as a Hilton property. Casino MonteLago closed its doors in October of 2013, and remains closed today.