Skip to content
Sign up for our newsletter
section-ads_high_impact_1
By Stephanie Annis Special to the Las Vegas Business Press
November 27, 2015 - 2:57 pm 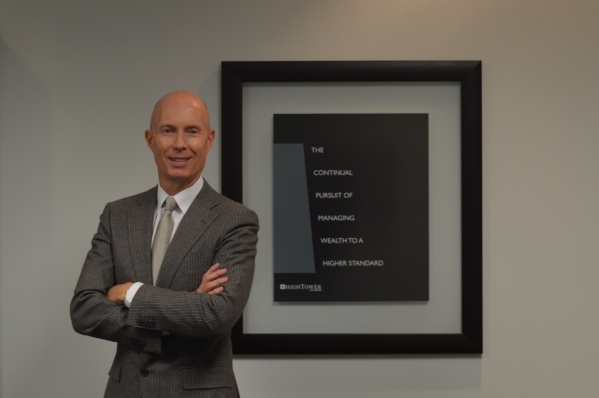 Mike PeQueen was honored recently as the Alum of the Year at the Lee School of Business at UNLV. (Stephanie Annis, special to the Las Vegas Business Press) November 2015

Mike PeQueen is the managing director and partner at HighTower Las Vegas, an investment firm helping thousands of clients invest millions of dollars.

He is a Las Vegas native, a product of the Clark County school system and earned undergraduate degree in finance at UNLV. PeQueen earned a master’s in finance and a master’s in banking and financial services management from Boston University.

He’s been in the wealth management business since 1986. Three years ago, PeQueen, together with his partners, left Merrill Lynch to form HighTower.

Q. What is The Stat Pack?

A. The Stat Pack is a business report that we started about two and a half years ago. It’s an online publication thestatpack.com which is a live website that’s updated weekly, or more often than that, with data and dialog about the Nevada economy, both southern and northern Nevada. And so, I partner with that, in that endeavor, with John Restrepo of RCG Economics who’s a local economist. We also use Elisabeth Thompson of E Thompson Media to help us format that and edit it.

Q. How do you view Las Vegas’ economy, specifically, are we anywhere near the highs of pre-recession; how did it affect Las Vegas, and where are we now?

A. The Great Recession that the United States experienced over the last several years hit Nevada as hard, if not harder, than anywhere else. We have come back a tremendous amount, but we are still probably 20 or 30 percent below the peak levels of employment and house prices back in 2006. But, we’ve come up a great deal from the bottom and the trend is still positive. What we don’t have back are all the construction jobs that were here building the big resorts; those are unlikely to come back in that same format. So we have to bring those back in the terms of economic diversification — the Faraday plant, that kind of thing. But I’m very encouraged by the process that we’re still under way and the momentum is still very good.

Q. There is talk about a possible deal to bring electric car maker Faraday to Apex Industrial Park in North Las Vegas. It could be a big deal. Do you believe it will happen?

A. I certainly have no inside knowledge whether or not the Faraday deal will happen, but I’m quite optimistic. I believe that Governor Sandoval and his chief lieutenant in this area, Steve Gill, are remarkable in what they did with the Tesla deal. And, I believe the Tesla deal put Nevada on the map in a way unlike it had ever been before in terms of economic development. So, I believe that there’s a very good chance that it could come. And, I believe that having it at the Apex location here in Southern Nevada would be an ideal situation. There’s a great deal of land out there. The opportunity to expand Apex and bring jobs to Southern Nevada is remarkable and Faraday would bring with it a host of ancillary companies that want to supply Faraday. So, it would be a wonderful thing if it did.

Q. How has government helped to improve the economy in Nevada?

A. What we’ve seen here in all of Nevada in the last two or three years — largely as a result of Governor Sandoval’s efforts — is a really transformed and greatly improved economic development operation. It is really first-class now. It was always good but we were never getting the economic diversification that we needed. Under Governor Sandoval and Steve Hill’s leadership, it has been obviously remarkable given what’s happened with Tesla along the way. So, I think Nevadan’s should really understand that we have really strong growth possibilities ahead as this much improved economic development operation continues.

Q. Congress may be on the verge of passing highway legislation that could mean I-11 is a priority. What will that do for our economy?

A. Well, I-11 is crucial to our transportation infrastructure. I applaud all the people involved including the Las Vegas Metropolitan Chamber that really led this fight to get it approved. It’s the only two large city pairs in America (Las Vegas and Phoenix) not connected by an actual Interstate, which seems very odd. I don’t know the exact timeline for construction; I can’t say that I’m privy to that. But, I would say it probably has a decade ahead of it before it’s fully in operation. But when it is done, it will set the stage for tremendous growth I think for the decades that follow.

Q. Is the casino market in Northern Nevada poised for growth?

A. I would say, certainly there is. Northern Nevada has always had a bit more of a diversified economy — with mining, and cattle, and a variety of other industries. And, they’ve not experienced the same growth that Southern Nevada has, in terms of gaming grow, but they are very close to the Bay Area, one of the wealthiest parts of the United States. I think the answer to that is most certainly yes, should they desire growth in their urban plan, in their planning process.

Q. What does it mean to be named Alum of the Year by the Lee Business School at UNLV?

A. It was very exciting. The Lee School of business has really grown a lot since the Lee family gave it a large transformative gift several years ago. While I graduated from there years ago, before that gift happened, it was a great education that I got, that I don’t believe enough people know about the quality of the business school at UNLV. All my life, my career, I’ve work alongside Ivy League graduates, and I’ve always felt equal to them in terms of knowledge. So, I’m really grateful to UNLV for that.