Skip to content
Sign up for our newsletter
section-ads_high_impact_1
By Stephanie Annis Special to the Las Vegas Business Press
August 7, 2015 - 4:30 pm 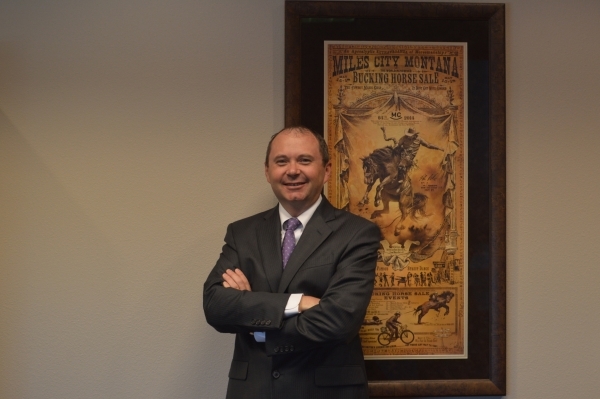 Terry A. Shirey wears a number of hats at Nevada State Bank. He’s president and chief operating office, having served previously as chief financial officer. He sits on the Board of Directors. He heads the Southern Nevada Small Business team.

It’s the latter role that brings him in direct contact with small businesses, which make up a large segment of the bank’s customer base.

Since joining the bank in 2008, Shirey has personally seen customers through the challenges of the most adverse economic environment many had ever faced. The mention of the Great Recession pains him as he reflects on its effects on his customers.

Shirey’s background include more than 20 years as a certified public accountant and 12 years in the financial sector.

Q. During your time with Nevada State Bank, what stands out to you in your journey from chief financial officer to chief operating officer?

A. I began my career as a CPA, moved into the banking industry back in 2003, and really found it was something I really enjoyed because banking does have such an impact on the community. Not many people will say this, but banking really is a noble profession in that it provides such a critical role in really funding capitalism, job growth, the economy. It is really the engine in terms of providing liquidity to companies.

Transitioning into this role, it’s just been a very rewarding to now be on the front lines of what makes banking great.

CFOs do play a pretty big strategic role, but it’s much more focused on providing direction around where the bank should focus. In the COO role, I still get to participate in that part of the bank strategy, but now I play a much more active role in the actual execution. When you’re on the finance side, you spend a lot of time talking about what kind of business we need. In the COO role, it’s how do you achieve that, how do you actually provide the higher level of service that will attract those clients to the bank. I’ve really enjoyed that.

Q. What challenges helped prepare you for this role?

A. I joined Nevada State Bank in the middle of 2008, which was right as the Great Recession was beginning. It was definitely an interesting time to make the transition and I just learned a lot through that process. I was fortunately able to work pretty closely with our CEO Dallas (Haun) on a lot of the larger strategic issues beyond the typical chief financial officer role which really, I think, helped prepare me for the transition into my new role.

Q. During that time, were you personally and emotionally affected by your job and what you were seeing happen to your customers?

A. Yes, I think it would be hard not to be. To see, really, the economic devastation that was occurring in our community, and kind of being in the front row, and being able to really witness it. So much of it was out of control of the homeowners and the business owners here in Las Vegas and really throughout Nevada.

So to see that up close, yes it was. It was also very instructive to experience it the way I did, in that, I was able to see how Dallas and the management team here dealt with it, which I think was in, ultimately, as positive a way as could be in that it helped refine the strategy of the bank.

Q. Are there any major lessons you learned from that experience?

A. There are definitely a lot of lessons I learned. I think one of the lessons we all learned was that, in banking in particular, risk management is just so important. When times are really good, that’s when your risk becomes the greatest because the decisions you’re making when times are good need to be fully informed by risk.

Q. What is a highlight or positive learning experience you can share from your first year as president and COO?

I think what I’ve enjoyed the most, and where I have experienced the most satisfaction, is working directly with clients and prospects. Those business owners here in Las Vegas and Northern Nevada that are really behind the economic recovery that we’re experiencing, getting to learn about their businesses, hear all the great stories of people that have started these incredible enterprises here in Nevada. These businesses that have grown and flourished, are employing people, and they’re innovative. I’ve really enjoyed that.

Q. At what stage of the recovery do you feel we are in?

A. We’re well on our way to recovery, but I don’t feel we’ve reached full recovery. We still see some stress, particularly with smaller businesses. They’re clearly on the mend and every year it gets better. We really started to see the recovery manifest in probably late 2010 and it has gotten incrementally better every year. But we’re not where we want to be. We still have higher than average unemployment here in Nevada.