Skip to content
Sign up for our newsletter
section-ads_high_impact_1
By Chris Sieroty Special to the Las Vegas Business Press
October 11, 2015 - 12:19 pm 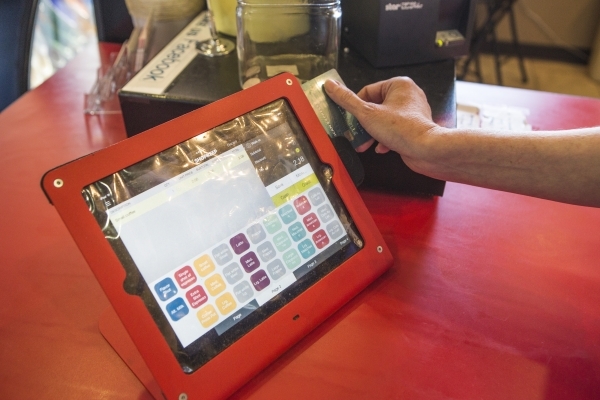 The deadline has come and gone for retailers in Las Vegas to install new technology payment terminals and for banks and credit unions to replace their customers’ debit and credit cards with ones that contain anti-fraud computer chips.

Not everyone has made the switch — yet.

The upgraded technology, called EMV chips, is used almost everywhere else in the world. EMV, which stands for Europay, Mastercard and Visa, refers to a global standard for card equipped with computer chips and the technology used to authenticate chip-card transactions.

But with changes in any technology comes the inevitable delay in putting that new technology into the hands of consumers.

According to CreditCards.com, more than six in 10 U.S. credit cardholders didn’t have a chip-enabled credit card despite the industry’s self-imposed deadline of Oct. 1. As of the Las Vegas Business Press’ print deadline, those numbers have not changed, a CreditCards.com spokesman said.

“This is the biggest change in decades in how credit cards are used … so we shouldn’t be surprised that things are moving slowly,” said Matt Schulz, CreditCards.com’s senior industry analyst. “One thing that won’t change, however, is consumer liability.”

“Walmart has long been pushing toward payments that give our customers more security than the traditional signature-based, magnetic stripe technology,” said Mike Cook, Walmart’s senior vice president finance and assistant treasurer, in a statement. “We began installing hardware that had the capability of accepting microchip cards more than nine years ago, and we activated the functionality on Nov. 1, 2014. Additionally, in 2014, both Walmart and Sam’s Club issued chip-enabled MasterCard cards to our branded cardholders.”

But many small and medium-sized business owners have been slow to implement the change because of the cost and volume of machines that need updating.

A search for EMV NFC Terminals online found the average piece of equipment can cost between $580 and $788. The National Retail Federation estimates the changeover to EMV card readers will cost retailers nationwide between $30 billion and $35 billion.

Phyllis Gurgevich, president and CEO of the Las Vegas-based Nevada Bankers Association, described Oct. 1 as a transition to the new technology. She said the date “changes how they define liability.”

Essentially, whichever party has not upgraded to EMV will assume liability for fraud.

For example, if fraud occurs at a store in Las Vegas or Henderson that accepts EMV, the issuing bank continues to bear the liability. If a merchant does not accept EMV, the retailer will be liable for the fraud that occurs at their stores.

Schulz said the new cards should help reduce fraud in stores that are able to process EMV, but an unintended consequence could me more fraud in other areas. Those areas include online shopping, which is unaffected, and gas stations, which don’t have to upgrade until 2017.

“Ninety percent of issuers should have the EMV cards to consumers by the end of 2015,” said Tony Hayes, a partner and co-head of Retail and Banking Practice at Oliver Wyman, a consultancy. Hayes was the moderator for PayThink 2015, a three-day conference Sept. 28-30 at The Cosmopolitan of Las Vegas.

He said the payment industry still has to deal with getting out a difficult message about why EMV cards are needed at the same time they are still being issued.

Hayes also noted the cost of the EMV cards are more expensive than a magnetic strip card. The typical cost of a magnetic stripe cards is about 15 cents, whereas Atlanta-based payments company First Data estimates a chip-based card can cost on average, between $2 and $4.

Despite the cost, retailers and bankers admit EMV technology is a step in the right direction to help combat the almost $8 billion a year payment card fraud in the U.S. It’s also a measure to protect retail business in Nevada, an industry that employs 265,122 and contributes $12.9 billion to the state’s gross domestic product annually.

“It’s a big cost,” Gurgevich said. “But the protection it provides in the long-term makes it worth it for everyone. Nobody can copy it like with the magnetic strip technology.”

Counterfeit card fraud occurs when a magnetic striped card is copied and then used by someone who stole your information or sold it to others. Chip cards prevent this type of fraud, because the chips can’t be programmed with copied or stolen information, according to the American Bankers Association.

Gurgevich said the chip produces a one-time transaction code that can’t be re-used for future transactions.

“It occurred to me that while the impact of chipped card technology on consumers is increased protection, their part … will be to activate their new cards when they receive them,” Gurgevich said. “It is also important to remain diligent in protecting their personally identifiable information.”

She said there were reports of possible increased fraud and scam attempt during the transition to EMV cards, because “scammers see a window closing.” Gurgevich urged consumes to continue to check their transactions and balances regularly and always protect PINs, passwords and account information.