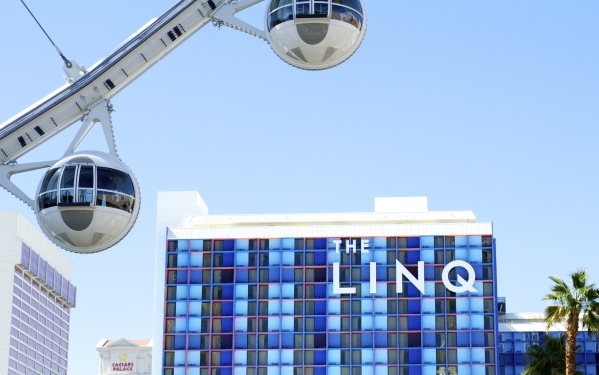 The Linq hotel has been scrubbed clean of its former identities and renovated with millenial guests in mind. (Courtesy Caaesars Entertainment)

This is the last name change for the former Imperial Palace and the short-lived Quad. That’s what a $223 million renovation will buy.

A top to bottom remodeling of The Linq hotel-casino was completed this month by Caesars Entertainment Corp., through its Caesars Growth Partners subsidiary. The changes scrubbed away any remnants of the Strip resort’s life as the Imperial Palace and the Quad.

The renovation ties the property physically and by name to Caesars’ Linq retail, dining and entertainment district that is anchored by the 550-foot High Roller observation wheel.

With The Linq, the High Roller, and property improvements at other nearby company-owned casinos (Flamingo, Harrah’s Las Vegas and The Cromwell), Caesars invested close to $1 billion to make the east side of the Strip “a social hub of Las Vegas.”

“The resort caters to those seeking authentic tech-savvy social experiences that canât be found anywhere else in Las Vegas,” Shaukat said.

The Linq’s 2,253 hotel rooms were renovated, including 244 suites and two “urban loft-style penthouses.” The pool desk was redesigned to include 25 poolside cabanas. The hotel lobby was redeveloped to include a signature bar and lounge area. The property houses retail and spa amenities.

Access to The Linq district, which includes restaurants, bars and retail outlets, was a primary reason behind the name change and redesign.

Shaukat said The Linq hotel offers “an experience at the heart of the Strip” for millennials.

Caesars, when it was known as Harrah’s Entertainment, acquired the Imperial Palace from the Engelstad Family Trust in 2005 for $370 million.

The company was going to demolish the hotel-casino until the recession halted Caesars’ development plans for the eastside of the Strip.

Engelstad, who died in 2002, was a North Dakota-born contractor who transformed the Imperial Palace out of the Flamingo Capri, a small Strip motel, in the 1970s and 1980s.

In 2012, Caesars decided to renamed the hotel The Quad, explaining the name is associated as the center of activity, much like the quad on a college campus.

The changes in the property were so dramatic, even the Q from the Quad logo couldn’t be reused in The Linq signage.

The penthouse suites are each more than 1,000 square feet, with modern furnishings, a large living room, powder bath, and a kitchenette with microwave drawer and a full-size refrigerator. The bar has seating for four; a dining room table seats six. The bedroom with a king-size bed also has upgraded features in the bathroom.

The Linq, which has room rates starting at $89 a night, went all-in on the technology side. Guests can use an automated valet retrieval system and an automated check-in process, which includes a self-check in and touchscreen interaction to make bookings for dining and entertainment.

During its days as The Quad, Caesars remodeled the casino area and other public spaces, adding several restaurants, including Guy Fieriâs Vegas Kitchen & Bar and Hash House a Go Go.

Through The Linq retail development, an area of the casino became O’Shea’s Casino, a space dedicated to the former stand-alone casino that was demolished for construction of the outdoor entertainment district. O’Shea’s casino includes several popular beer pong tables.