Skip to content
Sign up for our newsletter
section-ads_high_impact_1
By Robert Horne Special to the Las Vegas Business Press
September 10, 2015 - 1:22 pm 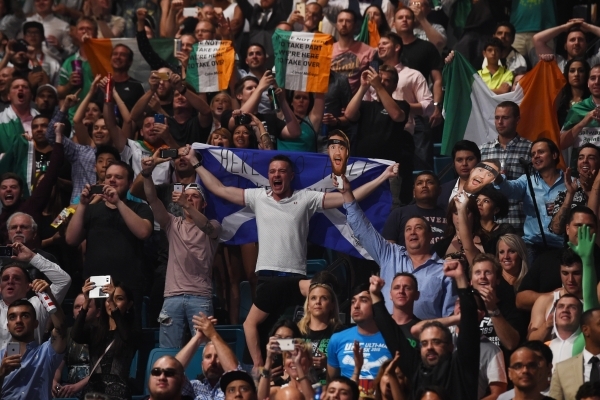 When it comes to mixed martial arts, Las Vegas is the undisputed center of the universe. And, as the sport has grown, so has its effect on the local economy.

In 2014, International Fight Week — the sport’s July showcase event — generated more than $190 million in economic activity, by one count.

The Ultimate Fighting Championship is the leading MMA organization in the world, and it has made Las Vegas its home since January 2001. The UFC hosts up to eight fight cards in the city a year. It also hosts International Fight Week, which includes the UFC Fan Expo, various MMA events, and a main event card that is held in one of the many venues on the Strip.

Applied Analysis, a Las Vegas-based business that generates customizable, market-based business and economic impact reports, performed a study on the effect of the International Fight Week in 2014 for the UFC.

Fight Week attendees spent nearly three times more than the typical Las Vegas visitor ($2,917 vs. $1,034), according to the report.

The analysis also shows that more than eight in 10 visitors would not have come to Las Vegas if not for the UFC 175 main event.

“It is a huge economic force for the local community,” UFC Chief Operating Officer Lawrence Epstein said. “The first big bucket of economic impact that we have is basing this very large entertainment and sports-media company here in Las Vegas. We have 375 employees worldwide and about 310 in Southern Nevada. It’s an important economic engine in and of itself just basing this business here.

“The second big bucket of impact we have is that we do a lot of events here in Las Vegas. We consider Las Vegas to be our hometown when it comes to events. We are doing anywhere (from) seven to eight a year here. Usually, our biggest events take place in Las Vegas. So not only is Las Vegas getting more events, it is also getting the biggest events the UFC puts on.”

“When you aggregate all those events we put on, and we’ve had several studies done by Applied Analysis, the UFC is either the first or second biggest economic impact creator of any event that comes to Las Vegas,” Epstein said. “And that includes things like National Finals Rodeo, NASCAR, Rock in Rio, Electric Daisy Carnival and all the major events that come here to Las Vegas.”

Growth felt in all sectors

Local businesses have also benefited from the success of the UFC and the popularity of MMA.

The Applied Analysis survey reports that Fight Week visitors spent 4.2 nights in Las Vegas, while other visitors average 3.3 nights. Of those 4.2 nights, 87 percent are spent at a local hotel.

MMA fans spent $1,898 in nongambling expenditures per trip compared with $699 by all other visitors. Those numbers do not include airfare and transportation costs. When it comes to gambling, Fight Week attendees spent $2,922, while other visitors spent $1,075.

“The most important part about understanding the economic impact of UFC and its visitors, are the fact there are local businesses that are supporting the events and activities that are taking place,” said Brian Gordon, a principal at Applied Analysis. “Travelers are coming to participate at UFC events, so if they are dining out and lodging within the resort corridor, those dollars are ultimately rippling through the economy to local vendors. The impact is felt by those who are supplying food, beverages and other supplies to help service those visitors who are coming to Las Vegas — not to mention the local employees who are providing the services.”

Other local companies are supplying services directly to UFC.

“In addition to our business, you are seeing a lot of training operations, a lot of athletes move here to be closer to the headquarters of the UFC and the center of the MMA world,” Epstein said. “We’ve seen a variety of production companies that have grown — companies that provide everything from lighting and other services we need to put on our events.

The popularity of MMA is growing around the globe.

According to the survey, more than 65 percent of Fight Week attendees would like to see more amateur martial arts tournaments during the weeklong event, which should help increase local amateur promotions such as Tuff-N-Uff.

Although the numbers are not available from this year’s Fight Week survey, Epstein said the mid-July event was clearly the biggest. He estimates that Fight Week and UFC 189 generated about $200 million in economic impact for Southern Nevada.

“We had a major event over at the MGM, which was sold out,” Epstein said. “It was the largest MMA gate that has ever been done in the United States at $7.2 million. There were over 16,000 people in attendance.”

Besides the big draw of UFC 189, the UFC rented out 550,000 square feet at the Sands Expo and Convention Center to build out a variety of experiences for fans, including autograph sessions, retail opportunities, UFC-related experiences, and hosting martial arts competitions.

“Just the expo itself employed so many workers in Southern Nevada,” Epstein said. “It required us to use all sorts of services, goods and equipment from local providers here to put on that event. That’s a huge generator to the local economy.”

All of this is good news for Southern Nevada. As the sport and the UFC grow, expect local businesses to benefit more economically.

“The more interest there is for these types of events just generates more exposure, which ultimately translates into economic activity — and not just for producers of events, but also for vendors and support systems that help make these events a reality,” Gordon said. “The ripple effect through the economy is substantial.”

One such ripple could be the opening of a combat sports-themed store by Adidas, planned in the next 18 months near the Strip, to take advantage of the rapid growth of the sport, said Scott Viscomi, president of Adidas’ combat sports line.

“MMA has grown from a niche sport into a national phenomenon,” Viscomi said. “It has gone mainstream now that it is on live TV like Fox Sports. As that has occurred, the retail opportunities have opened up and gentrified from the fight shirt market to a full collection of training apparel.

“It’s going to become our biggest division by far by virtue of our distribution,” Viscomi said. “We are growing quarter over quarter, month over month. Ecommerce is growing exponentially in 2015, and I cannot see a stop to it in the future.”