Skip to content
Sign up for our newsletter
section-ads_high_impact_1
By ROBERT HORNE SPECIAL TO THE LAS VEGAS BUSINESS PRESS
March 14, 2016 - 4:10 am 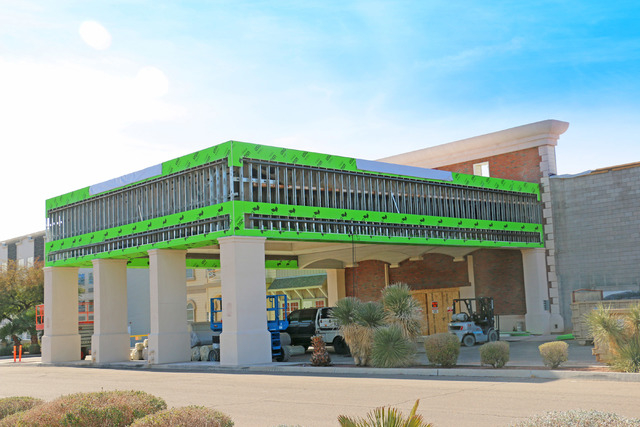 The new Rising Star is under construction in Mesquite. (Courtesy, Rising Star)

And that strategy isn’t expected to take a bite out of business that has been flowing to Las Vegas hotels, restaurants and venues.

Make no mistake about it, youth sports is big business. The Economy of Youth Sports, a 2015 University of Florida study, found that more than 53 million young athletes take part in travel sports and those athletes and their families spend more than $7 billion in sports travel-related expenses.

In order to draw its share of those sports tourism dollars, Rising Star wants to provide everything those teams and their families need to have a fun trip. When it opens in December, the facility will have 210 rooms; dedicated space for teams to gather, strategize and unwind, complete with bean bag chairs, 50-inch TVs, whiteboard walls and video game consoles; indoor and outdoor dining rooms; a 7,000-square-foot meeting space; a park-like area with basketball courts, volleyball courts, picnic tables, grills and a swimming pool, among other amenities.

Rising Star’s Chief Operating Officer Andre Carrier said the reason he expects the facility to be an economic boom for the town is that it turns the trip into a vacation where families can spend quality time together while supporting their young athlete.

He said many times host hotels could be 30-40 minutes away from the field where the games are played, and the games could be spread out among several different locations in a town. After or in between games, finding a place to eat that can accommodate large parties also can be stressful. Plus, if only one kid is playing, the other children in a family can quickly become bored.

“Going to tournaments was taking up our whole weekends,” Carrier said. “And when you consider it was happening three to four times a year, before we knew it, it was our family vacation time. We were happy to do it, but we didn’t get a lot of quality family time together. You make family time into a throwaway term, but I don’t want it to be. And we thought, ‘what if there was a way to still support Timmy, but also give everybody else a lot more enjoyment?’

“So, what we did was build a facility to specifically cater to your experience. It would give you a hotel room that Timmy, Tina and Terry were excited about because they each got their own bunk beds. Mom and dad are excited about that because there was an adjoining room that was really nice, and we took care of the meals because we specialize in feeding large groups. Kids will be happy with pizza, but we can also provide mom with a chopped spinach salad with quinoa. We also made sure all the fields were five minutes away. All this changes the whole weekend so that you got back five to six hours just based on having a headquarters hotel and all the fields together. We have now changed that weekend into a vacation for everybody.”

Rising Star will also benefit from Mesquite’s investment in its sports complex. The Mesquite Sports &Event Complex has three synthetic athletic fields and two natural grass fields that can host an array of sports, and all of Mesquite’s fields are no more than a five-minute drive from the resort.

“Mesquite was one of the fastest growing cities in America prior to the global financial crisis,” Carrier said. “The city had a lot of growth capital and some of that went into their recreation and park facilities, and as a result, they are state-of-the-art and very well-maintained. Mesquite is a smaller city, so the fields are closer together. From our facility, you can walk to about 60 percent of the baseball diamonds in the city, you can walk to two soccer fields, and if you got into the car, you wouldn’t drive more than five minutes.”

Because of the city’s investment in its sports complex, Mesquite is already one of the top destinations for sports tournaments in the southwestern United States, which sets Rising Star up to be a successful venture.

“Youth sports has a tremendous impact on the city of Mesquite with all of our facilities for youth soccer, baseball and softball,” said Nick Montoya, director of athletics and leisure services for the city. “What plays a big part in our success is the weather. In Utah and Colorado, where they try to do year-round sports, the weather doesn’t accommodate them as best as we can down here. A lot of those teams come south to participate here.

“Just by looking at our calendar, there are 52 weekends in a year, and between 35-40 are pretty much booked with youth and adult pro-ams, tournaments and camps. It’s a good thing for the community, and the economic impact is really for business stimulus.”

Besides the support from Mesquite, Rising Star is receiving advertising and marketing support from the Las Vegas Convention and Visitors Authority, and the state of Nevada is providing a special financing package in new market tax credits, Carrier said. Mesquite will also be better served by a new Interstate 15 exit being built at Mile Marker 118, which is at the southern end of the Mesquite Business Park.

Better news for the Southern Nevada economy is this doesn’t appear to be a case of money shifting from one property to another. Ryan Growney, general manager of South Point, doesn’t expect Rising Star to have any impact on that facility.

“With over an hour travel time each way, I can’t imagine there would be much interest in someone staying on the south end of Las Vegas,” he said.

And Rising Star is giving back by supporting local businesses. Carrier said the project has created numerous construction jobs for the area, the general contactor on the project is local and many subcontractors on site are also local. He also expects the hotel to generate a fairly significant amount of money in room taxes.

“Part of what drives tourism to Mesquite is sports tournaments and sports-related travel,” he said. “This facility only gives people another reason to come into our facilities, and it will add another dimension to the sports facilities in Mesquite.”

Mesquite’s weather also makes it an ideal destination for teams in cold-weather states to take part in year-round sporting events.

“Las Vegas families and athletes tend to look south for sports experiences,” he said. “When it’s really hot in Las Vegas in August, and they want to play a soccer tournament, they want to go play in San Diego. They are also always looking for new competition. The tragedy of that is it is sitting right there in Mesquite, which draws teams from Utah, Colorado, Oregon, Washington and everything to the north. We will be able to introduce new programming to teams form southern California and Nevada by creating a new place to easily coordinate tournaments and competitions.

Mesquite’s weather makes it an ideal destination for teams in cold-weather states to take part in year-round sporting events, and Carrier is also hoping to draw in teams and tournaments from Las Vegas as well.

“Mesquite is a great option for travel teams, especially from our area, as they spend so much time and money going to Southern California,” he said. “The Las Vegas events will always be successful, and a Mesquite complex could be a viable option to consider over a Southern California weekend.”