Skip to content
Sign up for our newsletter
section-ads_high_impact_1
By Craig A. Ruark Special to the Las Vegas Business Press
June 12, 2016 - 8:00 pm 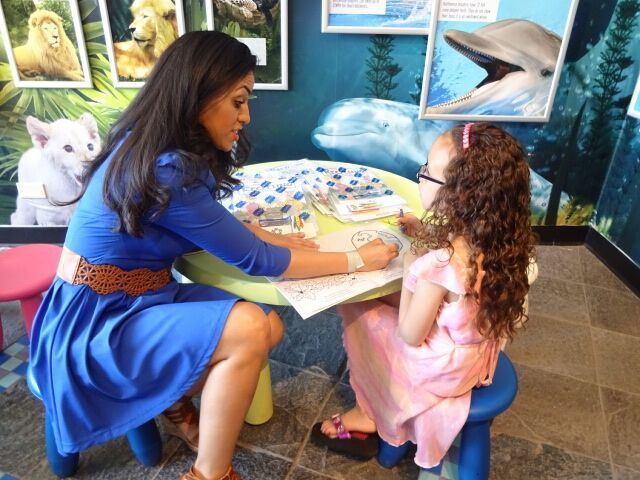 Visitors to the MGM exhibit are Golda Soto-Cordowin and her seven-year-old daughter Bellalina Young, who colors to learn about recycling. (Craig A. Ruark, special to the Las Vegas Business Press)

When you think about all the things that attract tourists to Las Vegas, a sustainability exhibit is probably not on the top of the list. In fact, it’s a bet that the vast majority of the 42 million tourists who visit each year don’t give a thought about recycling the beer and wine bottles after the precious liquid is consumed.

However, MGM Resorts International is trying to change the perception of Las Vegas by teaming up with Republic Services to introduce the Sustainability Discovery Center, located at the Mirage Hotel Dolphin Habitat.

The Habitat is a research and education facility that offers tours to more than 6,000 school children each year, teaching them about the ocean, the marine animals, and the environment in general. The Sustainability Discovery Center gives the resort an opportunity to highlight the corporate-wide commitment to protecting the global environment.

“Republic is more than just a company that picks up trash, we’re a recycling partner,” said Tim Oudman, market vice president of Republic Services. As a part of that partnership, Republic maintains a staff of employees at each MGM resort location. These employees personally sort through each bag of garbage by hand to pick out the recyclables from the food waste and other non-recyclable materials.

As a result of the MGM and Republic partnership, MGM Resorts recycles 28 million glass bottles each year. In 2015, the Mirage alone reached a 45 percent recycling rate, equaling more than 4,000 tons of material that did not go to the landfill.

David Blasko, director of the Department of Animal Care for the Mirage Hotel, is chiefly responsible for the development of the Sustainability Discovery Center. Blasko has worked with animals for more than 45 years, including the last nearly 10 years at the Mirage where he oversees the health and safety of the resort’s dolphins and white tigers.

“The one thing that I have failed to do for perhaps the first two-thirds of my career is to give people action items where they can make a difference. We have instilled passion but failed to provide a path,” said Blasko. “The big part of the Discovery Center is to define a path the visitors can take to become more sustainable.”

Outside is the beautiful Dolphin pool with an artificial coral reef and underwater viewing windows to watch the dolphins swim and play. Inside there are exhibits of sea shells along with photos and word panels that give interesting facts about the ocean. The exhibit is designed to educate people of all cultures and ages.