Skip to content
Sign up for our newsletter
section-ads_high_impact_1
By Craig A. Ruark Special to the Las Vegas Business Press
July 24, 2017 - 5:00 am 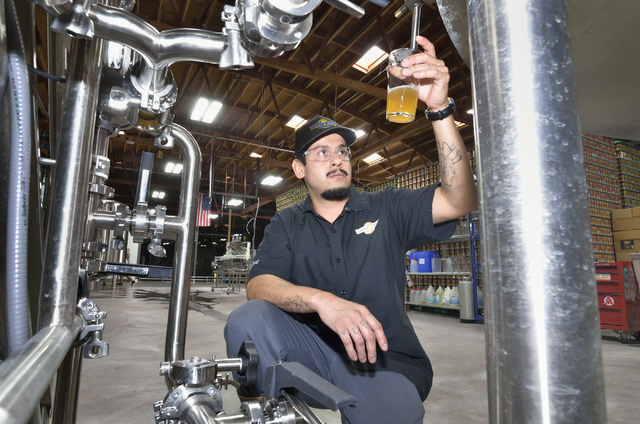 By a unanimous vote in the State Assembly and Senate, Assembly Bill 431, which revised the provisions governing the production, distribution and sale of alcoholic beverages, was passed by 2017 Nevada Legislature.

While the bill did draw some criticism from major beer companies, fearing that it would hurt the balance between suppliers and wholesalers, Supporters see the legislation as helping independent businesses, including brew pubs, be in a position to thrive and grow.

In the 1990s, with the growing popularity of craft beers, Great Basin Brewing Co. in Reno and the Big Dog Group in Las Vegas petitioned the state Legislature for the establishment of a brew pub law that allowed them to sell the beer that they brewed through their own retail venues. The legislation passed but they were limited to 15,000 barrels per year that could be brewed in Nevada and 15,000 barrels per year that could be sold at retail directly to their customers.

According to testimony during the 2017 Legislative hearing, there are more than 30 craft breweries in Nevada, nearly all of them with a pub connected to their operation where they sell beer directly to the public. In a brief telephone survey of nearly a dozen popular spots, such as Gordon Biersch, Chicago Brewing and Ellis Island, none of them come close to having the capacity to brew more than the previous 15,000 barrel limit.

As for craft beer retail sales, the new 5,000-barrel limit does not seem to be a problem either. Banger Brewing on Freemont Street only produces and sells around 700 barrels per year. Sin City Brewing, with a popular pub in The Venation, brews its beer in Henderson but despite the tourist traffic, only sells around 1,500 barrels per year. In addition, none of the craft breweries surveyed expressed any interest in increasing their brewing and sales capabilities.

The exception is Tenaya Creek Brewery, which has found success in the craft beer market place. The brewery’s products are already distributed in Arizona, Southern California and Alberta, Canada. And, while Tenaya Creek’s current production falls below the 15,000 barrel production limit, it has plans to expand sales into Northern California and Northern Nevada and expect to be pushing against 15,000 barrel ceiling before the next legislative session in 2019.

“We didn’t want to be limited by what we could produce,” owner Tim Etter said.

Tenaya Creek started as a brew pub and restaurant on Tenaya Way across from the Mountain View Hospital. Etter, who founded Tenaya Creek with his three siblings in 1999 dropped the food service portion of its business in 2008 to focus on beer. However, the production space was limited, so in 2014, they bought a blighted 12,800-square-foot building at 831 W. Bonanza Road and expanded the brewery’s capacity. The new facility features a tasting room where patrons can sample and purchase their favorite beer by the keg, growler or six pack.

With the larger facility and expanded brewing capability, Tenaya Creek was limited by state regulations as to how much beer it could produce. The answer to the problem was to ask for a change in the state regulations.

A fairly new player in the craft beer business is Golden Entertainment Inc., which in March of 2016, bought the Tenaya Creek building on Tenaya Way and opened PT’s Brewing Co. PT’s Brewing produces seven standard beers and has several rotating seasonal brews that are customer favorites.

Over the past year, PT’s Brewing Co. has made available a limited supply of its handcrafted beer within their PT’s and Sierra Gold taverns with five PT’s tap handles in each location. But, with 56 taverns in Nevada (54 in Las Vegas Valley and four more planned for this year), and the recently announced purchase of the Stratosphere, Arizona Charlies and Aquarius Casino Resort; PT’s Brewing has the potential to easily sell the annual maximum of 5,000 barrels, just within its own properties. However, once that 5,000 barrel limit is reached, PT’s Brewing can sell its craft beer to a wholesaler who in turn will sell it back to the individual taverns.

“We don’t have plans to market our beer outside our properties and production should remain well under the regulated limits,” said Howard Stutz, director of corporate communications for Golden Entertainment.

In most states throughout the U.S., the importing, distribution and sale of alcohol, along with the brewing and distilling, is regulated by a state-run agency such as Utah’s and California’s Department of Alcoholic Beverage Control. However, the state of Nevada does not have a similar control agency but instead has a three-tier system that is set up through the Nevada Department of Taxation.

The Nevada system was established in 1933, after prohibition, to tax the importation of alcohol. To make sure that brewers did not skirt the import tax, they also established rules that prevented brewers or distillers from selling directly to the public. This meant that all liquor had to be handled through a distributor who paid the taxes on the amount of liquor they imported or exported. It also prohibited a business owner from having more than one type of liquor license either a wholesaler, retailer or manufacturer of liquor.