Skip to content
Sign up for our newsletter
section-ads_high_impact_1
By Stephanie Annis Special to the Las Vegas Business Press
May 26, 2016 - 10:03 am 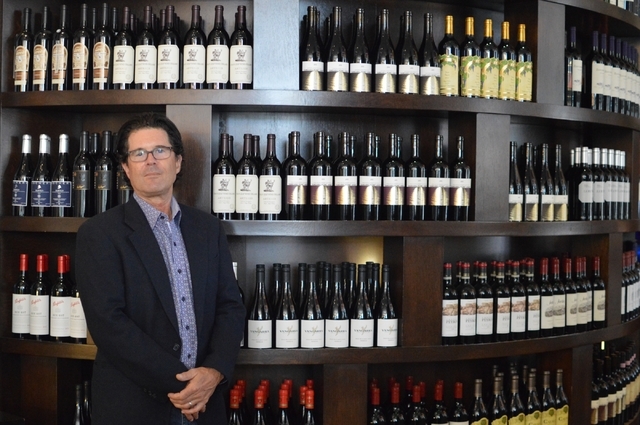 Chipper Pastron, one of three partners in MCC Hospitality Group, made a mark with the bagel trend but says he's no longer interested in chasing trends. Stephanie Annis, special to the Las Vegas Business Press

Chipper Pastron is one of three partners in MCC Hospitality Group, which owns restaurants in California and here in Las Vegas.

Pastron operates Morels French Steakhouse & Bistro at the Palazzo, JuiceFarm at The Venetian and The Palazzo, d. vino Italian Food & Wine Bar and Dragon Noodle Co. at the Monte Carlo, and other restaurants in California. The original Morels is located in Los Angeles.

The MCC Hospitality Group also owns Vanishing Point winery that produces Vanishing Point Wine along with a secondary, value-driven wine called Squirt Gun. “We actually do varietals under the two different labels.” Pastron said. “We also have a brewery under construction in Southern California.”

MCC Hospitality Group is the licensee for Peet’s Coffee & Tea in the state of Hawaii.

Pastron was raised in west Los Angeles. His first job was in the restaurant business, starting as a pre-cook at age 15. Together with Sal Casola, he started the Rose City Diner in Pasadena. It was a 1950’s style diner and quickly became an overnight sensation. At age 17, he had more than 70 employees working for him at Gladstone’s and was doing more than $14 million in sales a year.

That was the foundation of MCC Hospitality Group, which later added Sal Casola, Jr. as its third partner.

Q. How and when did you find your way from California to Las Vegas?

Q. When did you start owning businesses in Las Vegas?

A. We really got into business on the Strip about a year later. Once again, Tony Alamo called us. He had gotten involved with a guy named Mike Ensign, a casino guy here in town, and Mike had structured a deal with Steve Wynn where Steve Wynn put up a piece of property on the Strip and Mike was the operator and going to build a hotel and Tony was going to be the general manager/president. That was the Monte Carlo.

Tony called us up, basically based on our relationship and our experience at MGM, (and asked) would we be interested in coming out to Las Vegas and opening restaurants, leased restaurants. Mike actually came to L.A. that same day that we got the phone call and looked at our current operations at that time, which was Market City Café.

We had a concept, in downtown Los Angeles, at that time that was called Union Bagel; it was in Union station. We were roasting our own coffee; we were making artisan bagels and pastries, and baked goods in the train station. Revolutionary for it’s time. Mike looked at what we were doing and said these are the concepts I’d like you to do. Do you do anything else?

We were at that time developing a Chinese concept. We told him a little bit about that, he said ‘I want that too’. Then we did three leases with him at the Monte Carlo. That’s when we started owning our own businesses out here. In 1996, when the Monte Carlo opened, we opened Dragon Noodle Company; we opened Market City Café, and opened a concept called Golden Bagel and Coffee, again roasting coffee on the Strip, the first people to every do that.

Q. In a constantly changing city like Las Vegas what has changed and what has stayed the same?

A. Our Market City Café. Seven years ago, they asked us to revamp that; that’s now called d.vino. It’s still Italian focused; it still has the same wood burning pizza oven that we put in back in ’96. It’s a hipper re-focused Italian concept.

Q. How did Morel’s come to be?

A. We actually had an opportunity to get involved with The Venetian, with Market City Café, and just for a variety of reasons at that time felt the timing wasn’t right for us. We had a lot of growth going on in Southern California at that time and it just didn’t work. But then when The Palazzo came online, we circled back with the people we knew and that’s how Morel’s got born. Rob Goldstein came out and took a look at our Morel’s in Los Angeles and said he thought the concept would do really well here. That opened in 2007.

Q. What are some of the trends in which you were the first?

Q. How do trends affect your choices as a business owner with several restaurants?

A. Back in the ‘90’s, we were in the bagel business. We were very fortunate; we did really well with it. We got involved in the bagel business at the time that was trending and really in a lot of ways in the food world it was really that explosion of bagels that kind of became a national focus on bagels, that almost created that whole idea of a trending food concept. We did well; we were very fortunate that our bagel location in Union Station and our bagel location here in Las Vegas were insulated; they were in these environments where no one could come (compete). But that wasn’t by design. It gave us a unique perspective on what happens when something is trending. And it was terrible. It was terrible for other people in the bagel business because bagels just went crazy for a couple of years and then you just had this massive fall off of people going out of business. None of that affected us but it makes us take pause.