Skip to content
Sign up for our newsletter
section-ads_high_impact_1
By Robert Horne Special to the Las Vegas Business Press
January 12, 2015 - 3:15 pm 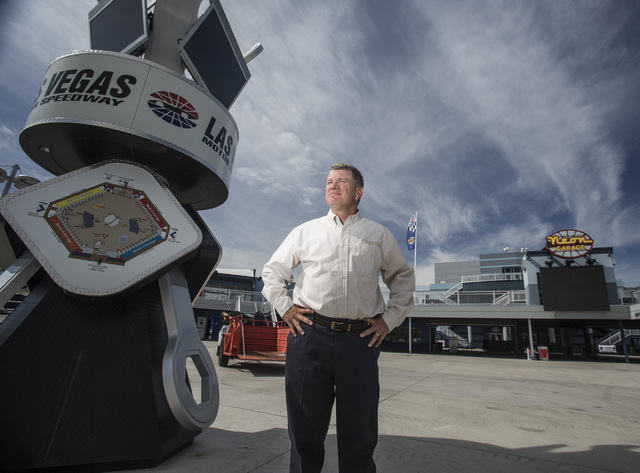 When the checkered flag dropped as Brad Keselowski crossed the finish line to win the 2014 Kobalt 400 last March, the green flag dropped on the staff at Las Vegas Motor Speedway to start planning this year’s NASCAR Weekend.

In fact, while stock cars were racing around the 1.5-mile superspeedway at more than 150 mph, NASCAR fans in attendance were offered special deals to buy tickets for the 2015 events, March 6-8. The weekend includes the Stratosphere Pole Day, Boyd Gaming 300 NASCAR Xfinity Series races and the Kobalt 400 NASCAR Sprint Cup Series race.

“It’s a tremendous undertaking,” said Chris Powell, president and general manager of Las Vegas Motor Speedway. “We plan the actual event and marketing through the course of 51 weeks to get ready for NASCAR Weekend. We start marketing during the previous year’s events by offering tickets for sale. People who renew their tickets are given a … gift that has significant value — something along the lines of a tool kit.

“We do that in conjunction with our partnership with Lowe’s Home Improvement. Kobalt is a brand sponsor of the Kobalt 400 Sprint Cup event, and we work very closely with Lowe’s.”

Powell estimates attendance for this year’s events will top 300,000 fans, which is why the weekend is billed as the “largest sporting event west of Texas.”

And all of those NASCAR fans have a huge economic impact on Las Vegas. The Las Vegas Convention and Visitors Authority said the event attracts more than 150,000 visiting fans and generates more than $146 million in nongaming economic impact for Southern Nevada.

NASCAR Weekend also puts locals to work. Powell said the speedway hires 2,000-3,000 part-time workers for the event. Openings are for everything from security to concession workers, ushers to gate attendants and traffic coordinators.

“The race has grown because people are becoming more and more aware of what a Vegas NASCAR race has to offer — from the weather to all the different forms of entertainment that our city has to offer,” Powell said. “Entertainment comes in many fashions — retail, hotels, gaming and all the great restaurants here in town —in addition to attending a NASCAR race. We have a lot to offer that our competitors cannot.”

For NASCAR fans, the biggest draw might be the Neon Garage, which provides unprecedented access to race teams and drivers, unique concession areas, live entertainment and the Winner’s Circle, according to the speedway’s website. The Neon Garage allows race fans to watch the drivers and crews of the NASCAR Sprint Cup Series from both ground level and elevated positions.

“No other speedways have the Neon Garage, and that is one of the selling points for us at the Las Vegas Motor Speedway because of the access that fans can have,” Powell said. “At other speedways, those areas are off limits.”

An event this size can be a logistical nightmare. Last year, thousands of fans who had parked in a free parking area were not allowed to leave until the paid parking lots had emptied, by some estimates an hour after the race.

Powell said at the time it was a mistake to lock the gate and apologized.

“Each year we make adjustments, when necessary, to our plans for vehicle flow,” he said. “This year is no different. We began planning for the 2015 event as soon as the 2014 NASCAR Weekend concluded. Without question we caused a ‘bump in the road’ last year, but that will not happen again. As long as everyone follows the directions of law enforcement and traffic-control personnel, we’ll continue to see efficient ingress and egress this year.”

Getting the message of all the events during NASCAR Weekend out to the fans is a challenging process, even though race fans are technologically sophisticated.

While NASCAR Weekend and the Kobalt 400 have large national sponsors, they also have local companies signed on as sponsors. The Stratosphere sponsors Pole Day on Friday, where drivers take to the track to determine starting positions for the races. Boyd Gaming sponsors the Boyd Gaming 300 NASCAR Xfinity Series race.

“This event is simply a great demographic fit for our customer base,” Boyd Gaming spokesman David Strow said. “Our customer base is very interested in NASCAR, and the event helps fill hotel rooms at all of our properties. Plus, it’s an attractive marketing tool to offer our customers across the country. This is a good destination event for those customers, and it is a good event for a lot of our Las Vegas customers.”