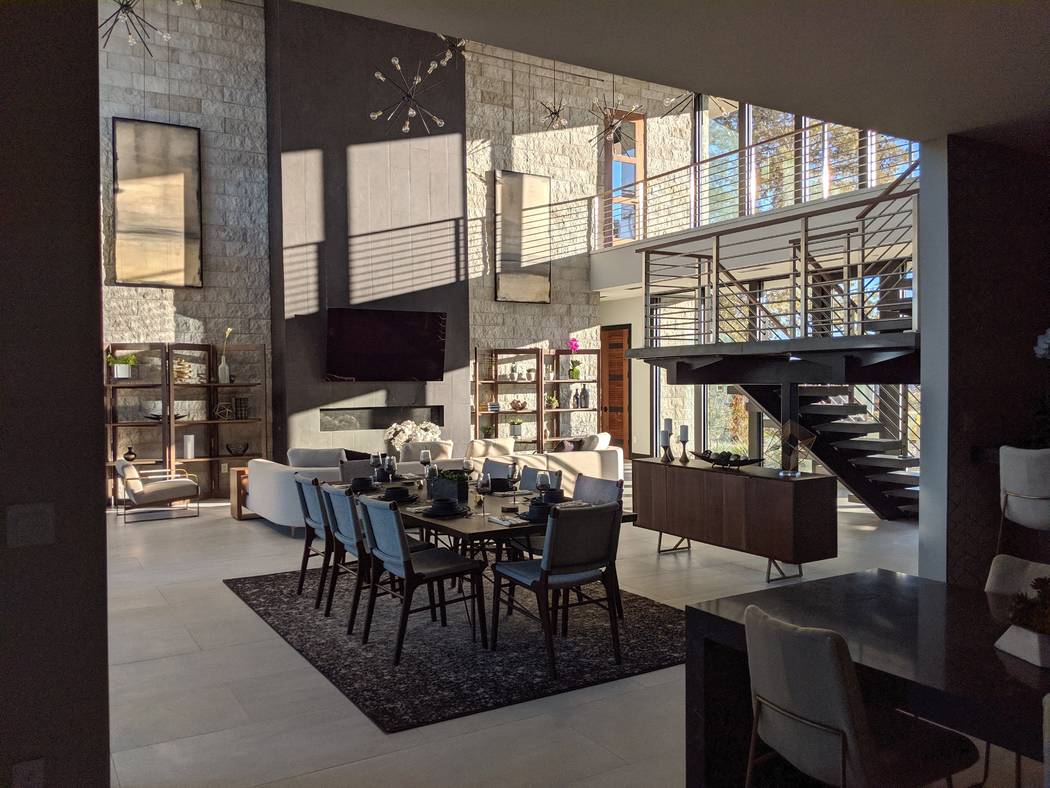 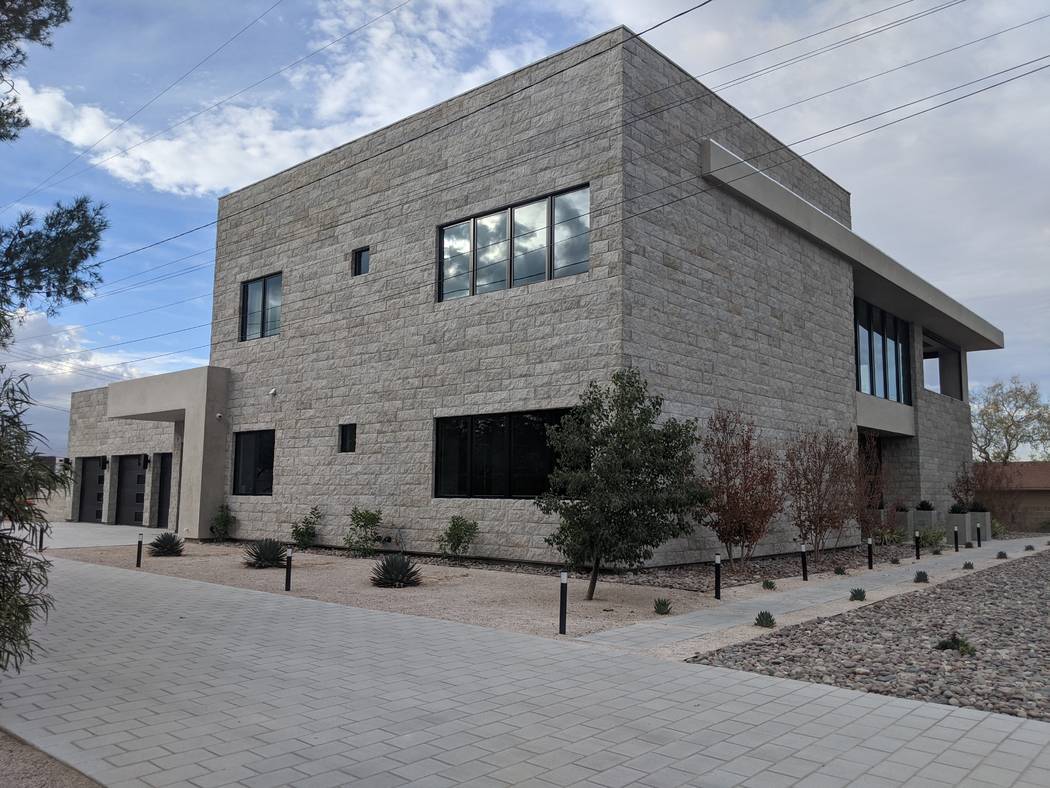 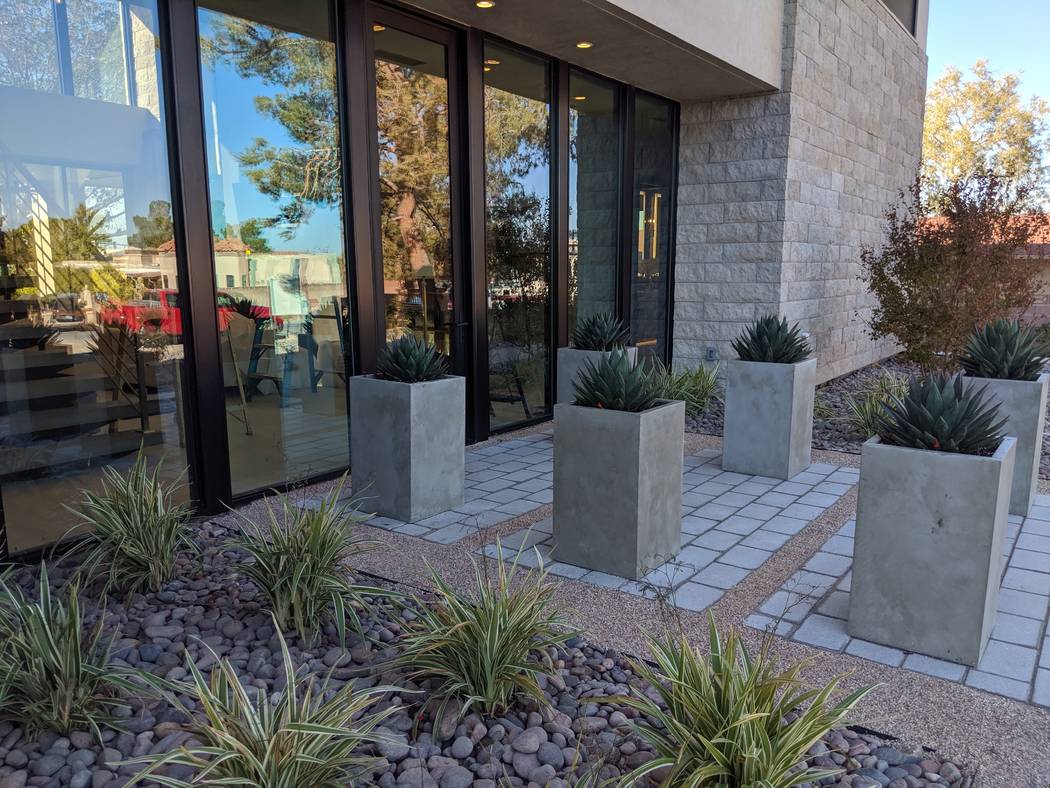 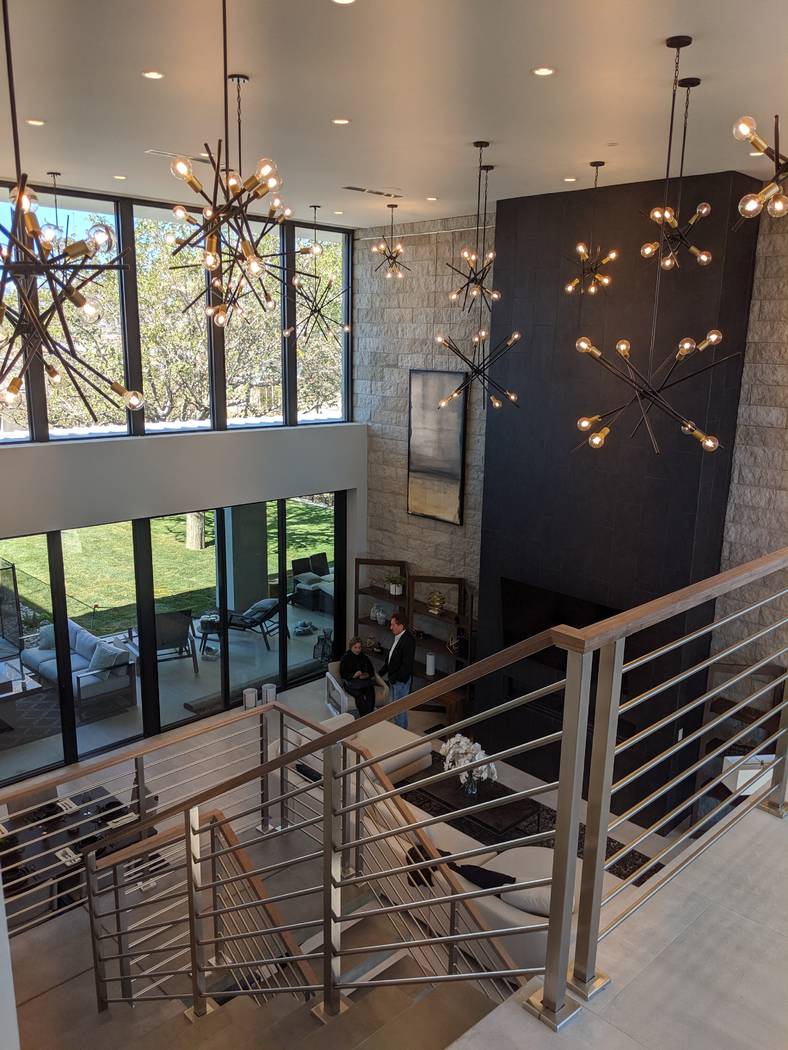 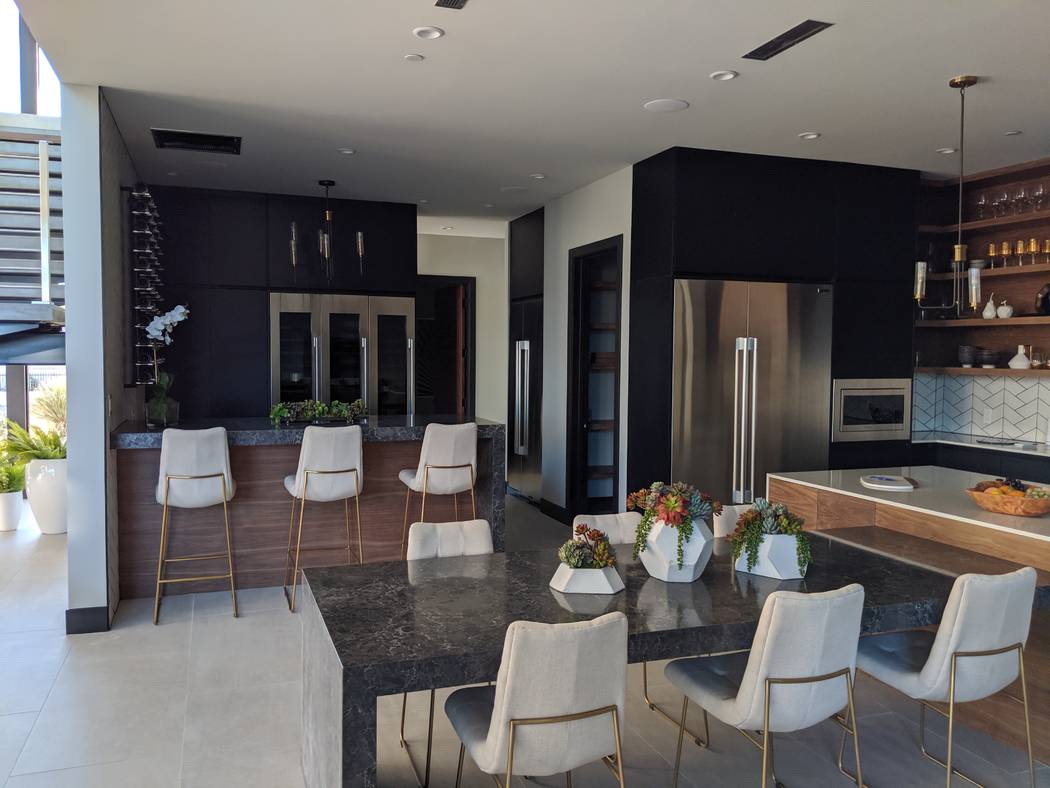 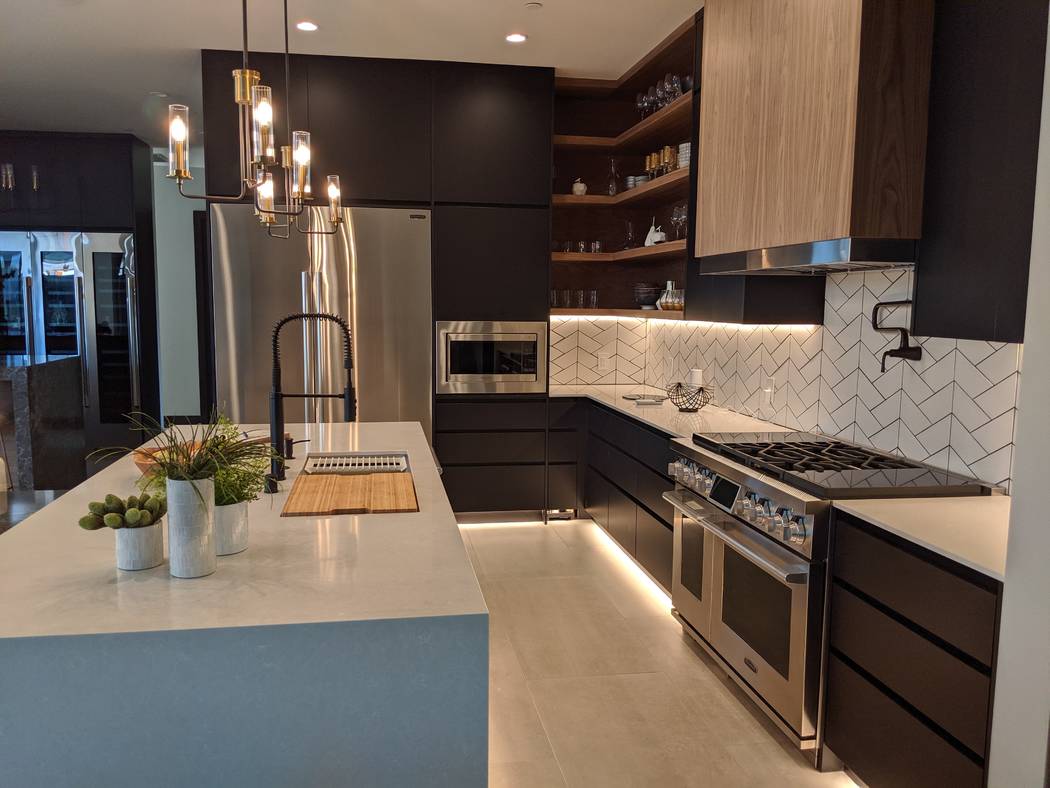 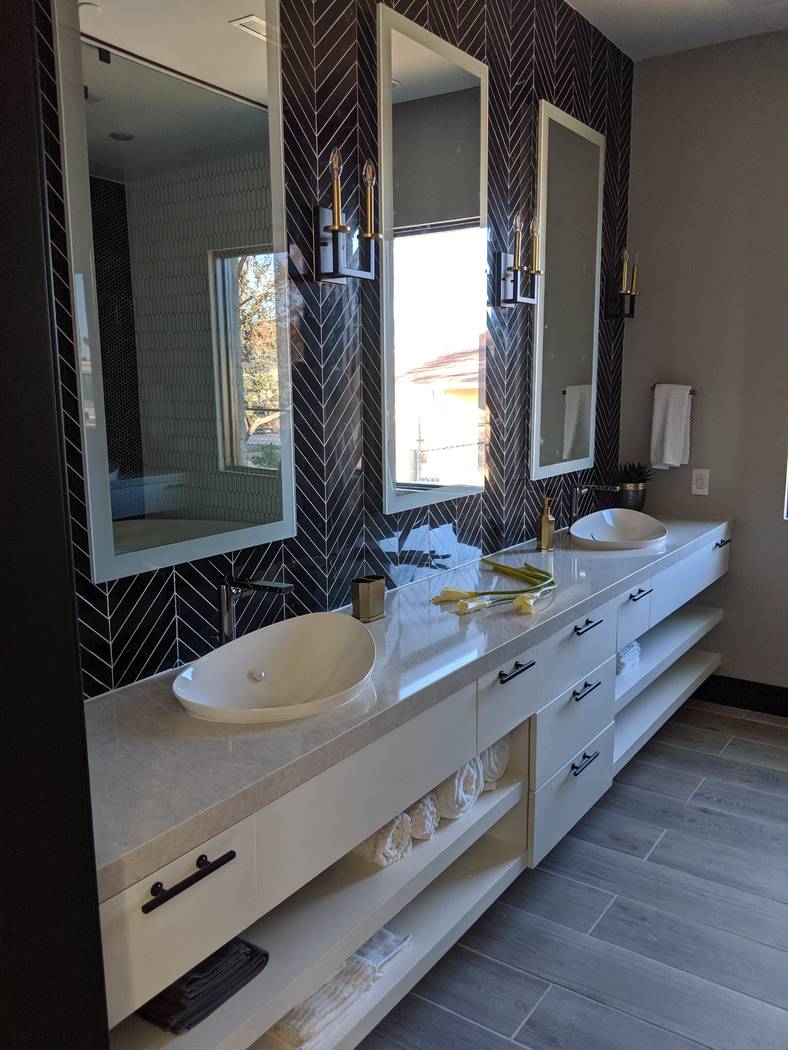 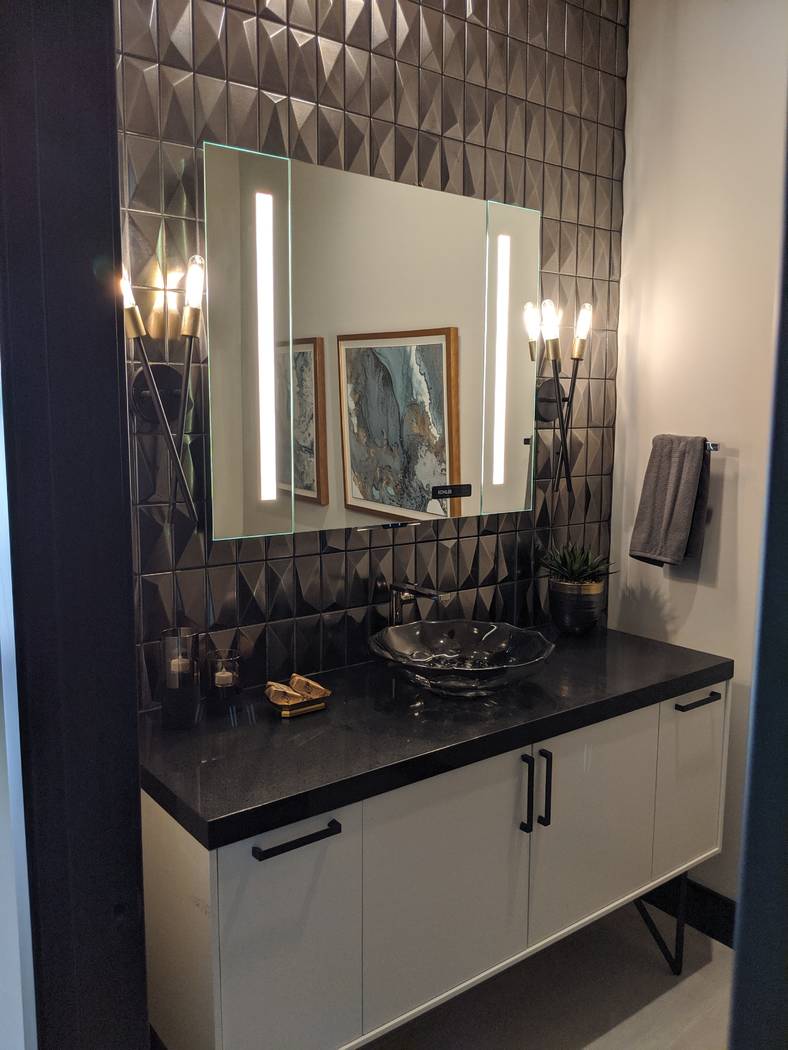 The master bath has a modern design. (Element Building Co.)

Josh Anderson said his Element Building Co. has taken a 1970s-era home and shown the world what you can do with it.

That’s after spending about $2.2 million as part of the 2020 New American Remodel that will be on display to the world the week of Jan. 20 as part of the International Builders Show sponsored by the National Association of Home Builders.

The Las Vegas company formed in 2008 has completed two New American Homes for the builder show — one in 2014 near MacDonald Highlands and in 2016 at MacDonald Highlands in Henderson. This is Element’s first crack at the New American Remodel after being approached by the builder group. The luxury custom-home builder with a dozen employees has been doing high-end $1 million-plus remodels for about three years. It builds three to four luxury custom homes a year.

The upstairs has the office and two bedrooms and a sky deck off the side of the second story with view of the Strip. The downstairs houses the master bedroom and wellness room with gym equipment, massage table and steam sauna.

“We wanted it to be a great learning experience for builders around the country,” Anderson said. “We wanted it to be an inspiration of what’s possible. You look at what we had and what we created, and it’s pretty amazing. It has all the feel and characteristics of a true custom home.”

Anderson said a lot of homes they’ve worked on in the past have been larger, but they wanted to see what they could do in a smaller one. They even kept the original footprint of the home but had to create space to accommodate tours of a couple of hundred people walking through it at any given time.

“We took a 1977 ranch and turned it into a LEED-certified modern custom home,” Anderson said. “It will have a whole slew of certifications. That’s what we do whether it’s new construction or a remodel. We’re trying to create the highest-performing home we can.”

Anderson bought the home near Warm Springs Road and Decatur Boulevard for $415,000 in 2018. He looked for a home where there were no remodel restriction and one he could make the investment and changes to be ready for the show but make money on the resale. He plans to put it on the market for $3.3 million in an older neighborhood where there are new homes in the area that have sold for more than $4 million.

“I bought the house because doing a remodel you have to own it,” Anderson said. “I love the ease of access and wanted something close to the (Raiders) stadium and be accessible from the convention center for tours (of 7,000 builders) during the show,” Anderson said. “If we don’t sell it, it will be a second home.”

The home’s architect, Phil Kean, wanted to make a design different than a typical Las Vegas home and drew upon Palm Springs as an inspiration, Anderson said. The home became two stories to add square footage and take advantage of an unobstructed view of the Strip, he said.

Pursuing that option, however, created a challenge of the experience created on the property. The views immediately surrounding the home consisted of a street and an area beyond the backyard that felt industrial, he said.

In order to block those views, a lanai (a covered porch) and summer kitchen were designed to create a courtyard that houses a 5-foot-deep pool, Anderson said.

But that concept created another challenge of working around an existing mulberry tree centered in the courtyard. That had to remain because the tree was one of the major reasons Anderson said he was attracted to the property. They designed the home around it instead, Anderson said.

“I fell in love with that spectacular tree and designed the home around it in the backyard,” Anderson said. “The whole experience of the house wraps around this tree, now.”

The home had low ceilings of 8 feet, chopped-off rooms and a kitchen that was cut off from the rest of the house and was small. The layout had a bedroom in which you had to walk through the closest to get to the bathroom, Anderson said.

“We took that footprint up to add a second story and went from a Mediterranean stucco Vegas home with a pitched tiled roof and turned it into what it is now, contemporary,” Anderson said. “It’s open with a lot of natural light whereas before it was chopped up and not much light with small windows.”

There’s now a flat roof, stone facade and floor-to-ceiling windows. The great room, which is the kitchen and family room, has 20-foot ceilings with an open staircase and bridge across to the sky deck.

Once the design was finalized and demolition began, the team encountered another challenge, Anderson said. The home’s original perimeter walls had termites. This required tearing down everything and starting from a concrete slab, he said.

“In order to stay true to the remodel aspect, it was important to keep the walls in the same location,” Anderson said. “The only thing that changed, was instead of building on top of existing walls, new two-story walls were put in their place.”

Even with the various challenges faced, the New American Remodel was completed in less than six months, Anderson said.

It is a showcase of sustainability by implementing the latest in construction science, with a focus on design and energy efficiency, Anderson said. Propane was introduced to the residence to reduce the electrical draw, and LG solar panels were added to reduce the electrical needs. Fi-Foil installed their cutting-edge hybrid insulation product, Hy-Fi, he said.

The remodel introduced the Savant Home Automation System, which provides the owner of the home with capabilities to control the lighting, climate, entertainment, garage doors, blinds and security all from one app, Anderson said.

There’s an audio system operating throughout the home allowing each room to enjoy customized music and volume settings. The system can incorporate spa music in the master suite, modern hits in the office or single source throughout the whole home at the same time. The content can come from any media sources.

Anderson said this isn’t a typical remodel someone would do to take a home bought for less than $500,000 and put more than $2 million into it. Someone has to love their neighborhood and landscaping to do that, he said.

“This is more of an exercise for the show than for an owner,” Anderson said. “This is the most expensive remodel we have ever done. We’re finishing one now that’s $1.4 (million). Where we add a whole second floor is not a typical remodel. Normally, we will move walls around and re-layout the house and redo the finishes.”

Finishes of the home

“There’s a lot of three-dimensional geometric tiles in the house, which is really popular right now,” Moser said. “There’s hexagons, polygons and fun shapes. There’s tiles on the floor and walls. The tiles on the walls, like the backsplashes and accent walls, we did a lot of black of white. With some bathrooms we did some dramatic coloring with some dark emerald and blue tones.”

Both the interior and exterior were about texture. The main goal was to make people feel comfortable and want to touch the finishes.

“A lot of modern contemporary design tends to be sterile and makes people uncomfortable and not want to touch anything,” Moser said.

The exterior has a monolithic pallet with manufactured stone that’s lighter and has stucco with a similar color.

“We wanted to keep it neutral — not white or dark but kind of a taupe color that works well with the desert,” Moser said.