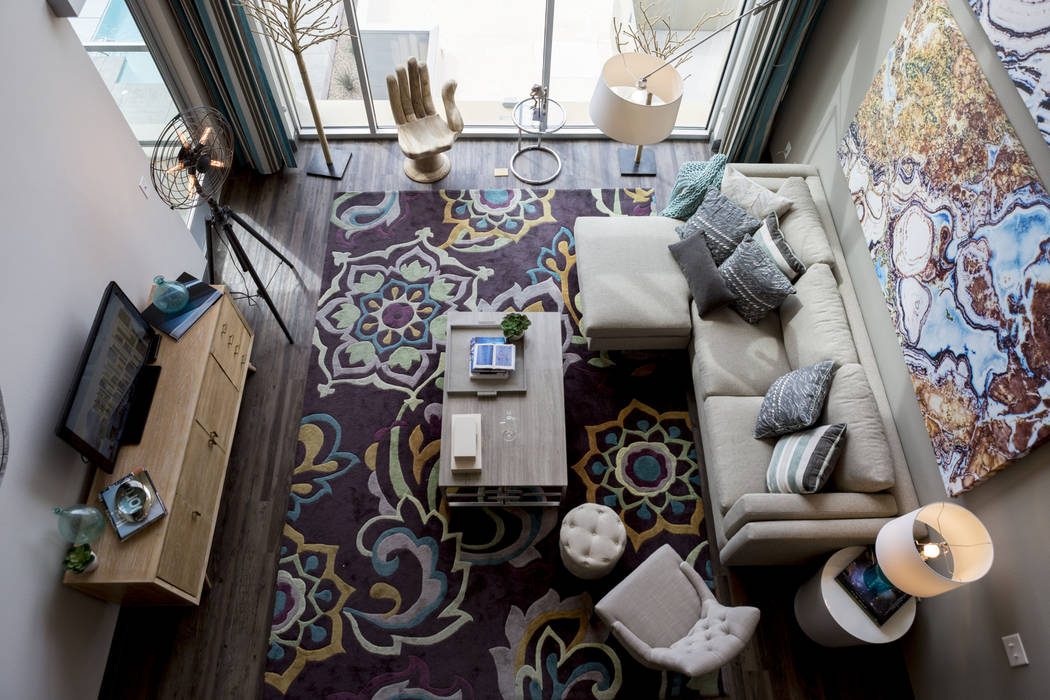 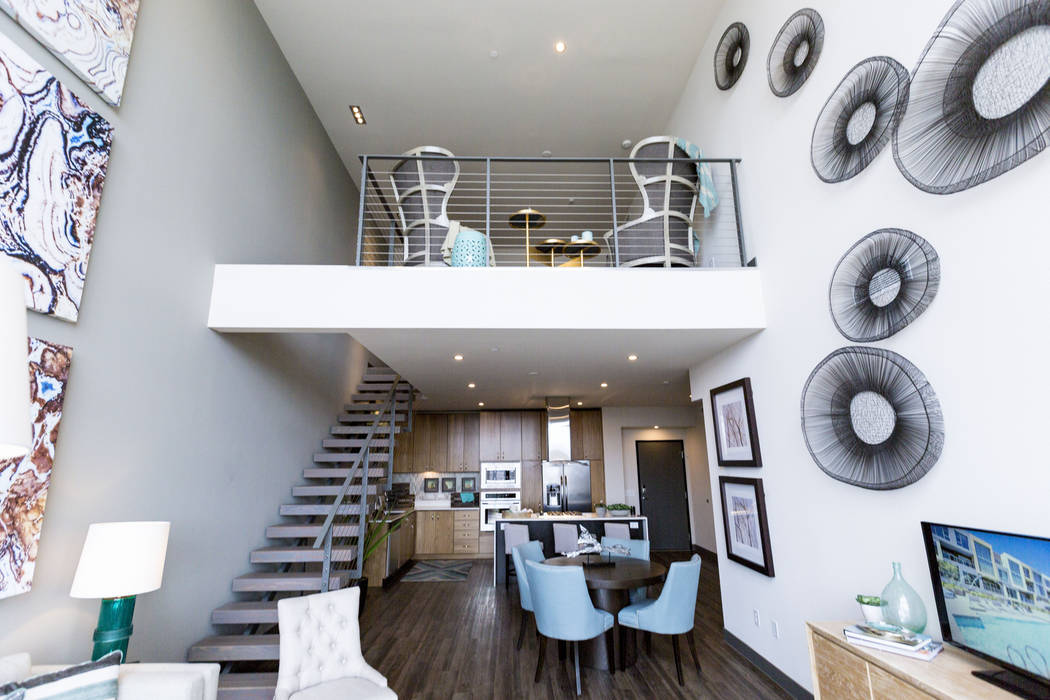 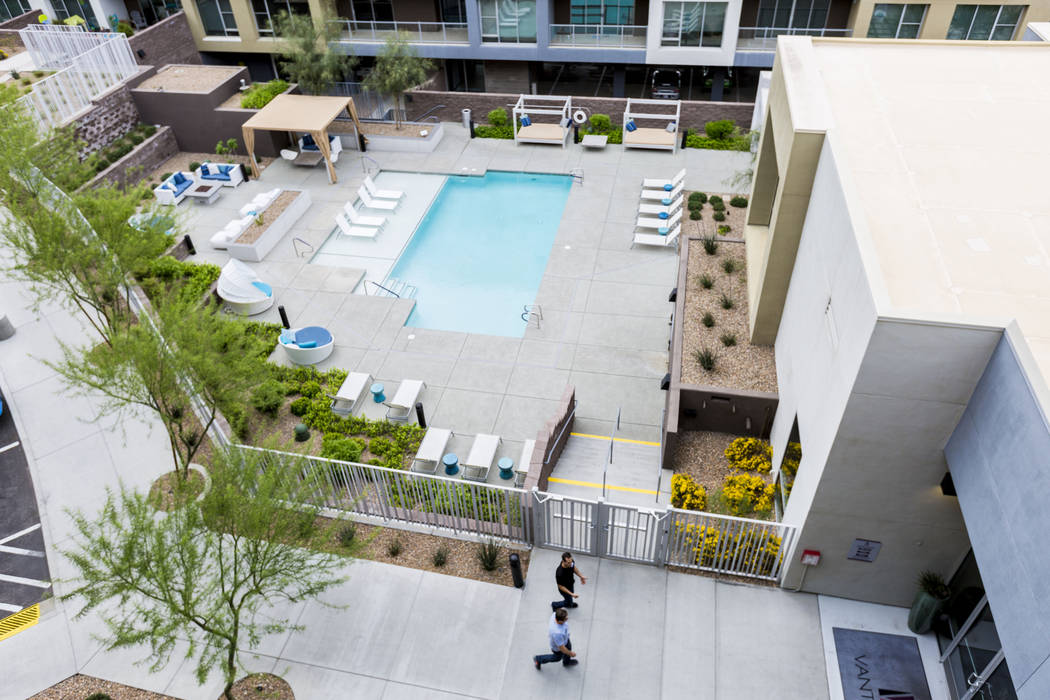 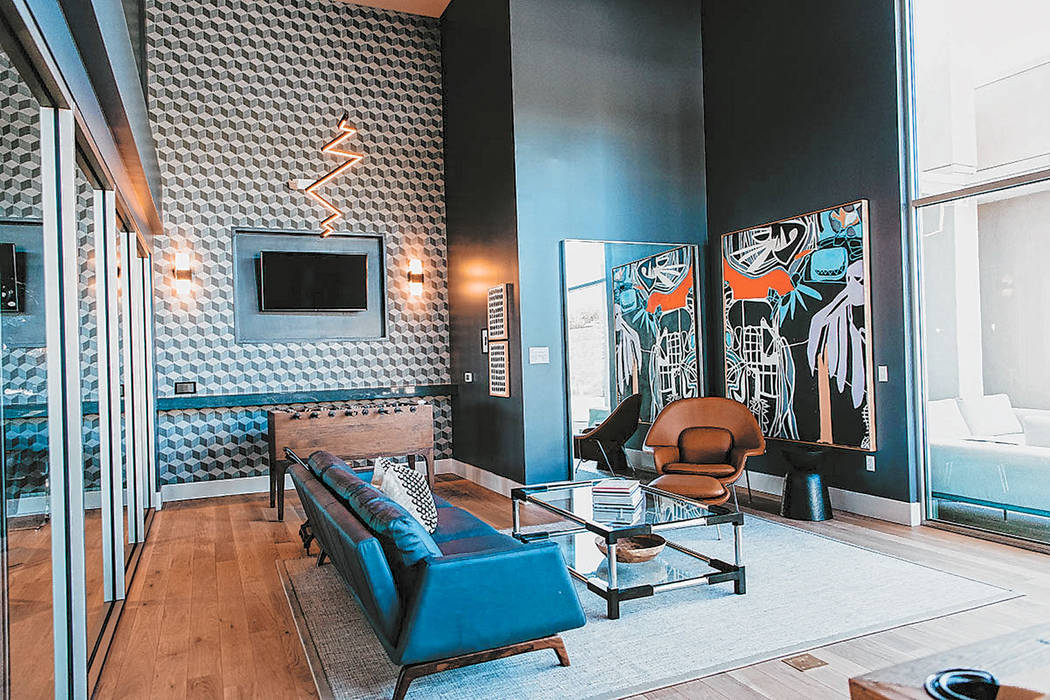 The new luxury apartment community at Tanager in Downtown Summerlin features a clubhouse and other resort-style amenities. (Tanager) 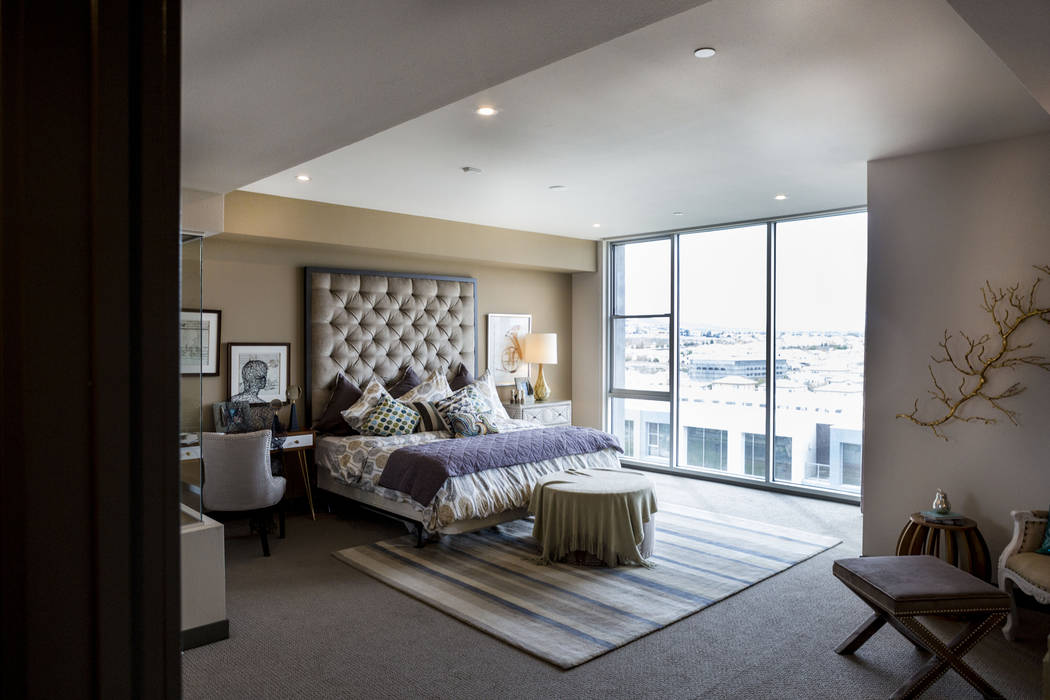 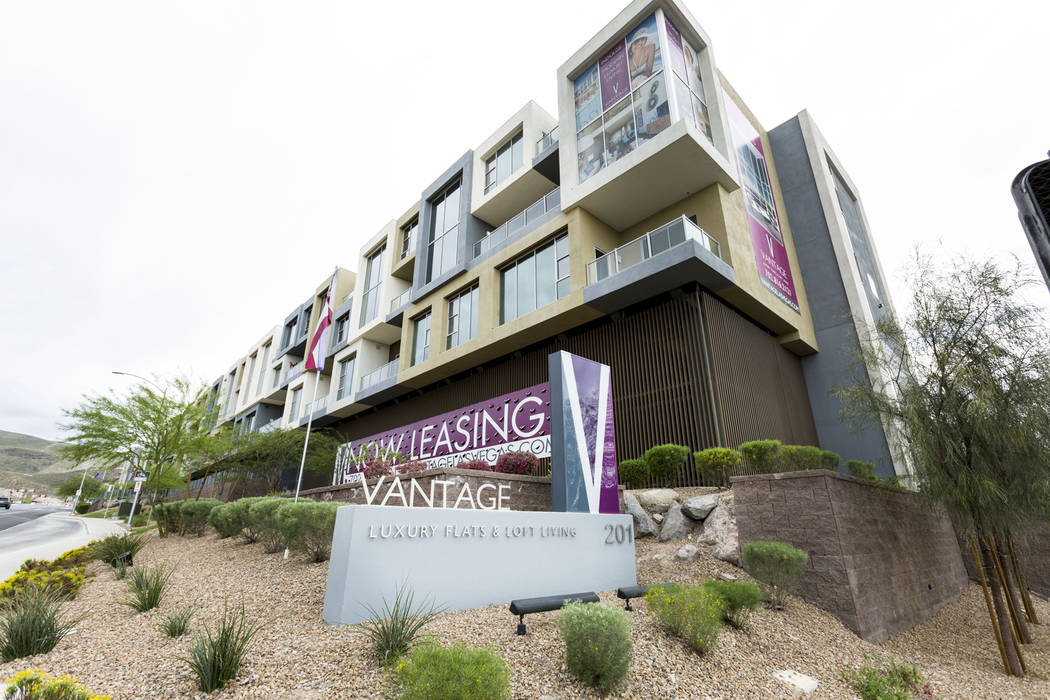 Vantage Lofts in Henderson is one of several luxury apartments that have opened across the Las Vegas Valley over the last couple of years. (Las Vegas Business Press/File Photo) 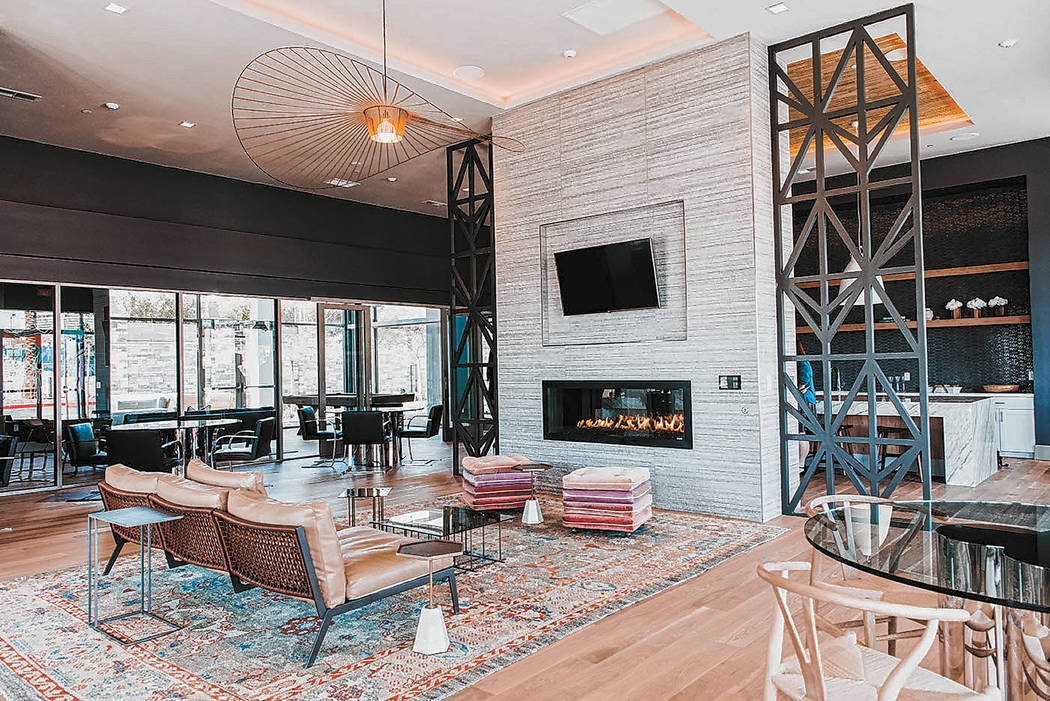 The clubhouse at the new luxury apartments at Tanager in Downtown Summerlin is ready for the community's new residents. (Tanager)

Like the August weather, the Las Vegas apartment market is hot and single-family home rentals are bustling as well.

Apartment rents are increasing, occupancy rates have been strong and investors continue to look for opportunities to buy the valley’s apartment complexes with records being set in the process.

Renting a single-family home is getting more expensive as well.

The average monthly apartment rent now stands at $1,124, up 1.3 percent from the first quarter alone, higher than the 1.1 percent for the West as a whole. Las Vegas rents have risen in every quarter since the third quarter of 2011, according to REIS, a commercial real estate research firm in tracking the market through the first six months of 2019.

The firm predicts by the end of the year the average rents will reach $1,156, which represents a 5 percent growth for the year after an 8.8 percent growth in 2018. U.S. rents on average, by comparison, are projected to increase 4.2 percent this year.

Apartment List, which tracks markets nationwide, reported apartment rents in Las Vegas from July 2018 to July 2019 were up 3.9 percent, the third-fastest among the nation’s largest cities. Since 2014, it said Las Vegas rents have grown by 22.1 percent compared to the national average of 12.6 percent.

“Single-family increased the most in metros with high employment growth,” said Molly Boesel, principal economist at CoreLogic. “Job growth in Phoenix, Orlando and Las Vegas doubled the national average during May and stimulated increased rental demand in these markets and therefore driving rent prices upward.”

That’s good for apartment owners looking to bolster their profits and bad for tenants who continue to face rent increases.

The average vacancy rate has held steady about 4.2 percent as construction has added more apartment units.

In its midyear report, REIS quoted a market analyst describing the “higher-end demographic expanding very fast” in Las Vegas. Many of the 48,000 people who moved to Southern Nevada in the last year are from Southern California and are escaping state and local taxes.

There’s value for those Southern California residents as well. Apartment List has said Los Angeles-area apartments are 1½ times more expensive on average than those in Las Vegas.

One apartment owner, Westland Apartment Group, which has properties in Las Vegas and Southern California, created a stir by giving its California tenants a flyer that looks like it’s encouraging people to relocate. It was posted on social media.

The flyer touts how it has more than 35 communities in Las Vegas. It talked about Las Vegas “massive job growth,” how people can get more space for less money than Los Angeles and how the cost of living is cheaper in Southern Nevada.

The flyer talked about various fees would be waived and that would give the tenant extra cash for relocation.

“But they come here with a housing expectation,” the REIS report said in citing one analyst. “The problem with this is the type of supply these transplants are finding when they get here. We have employees with Google coming here making $1,100 or $1,400 a week; 380 Raiders employees just moved to town, so the higher wages are coming pretty fast. We don’t have enough of the right apartments. These wages are increasing and that’s the fastest-growing demographic, and we need to build for what’s coming.”

Some 77,000 units in the valley, just under half of the supply, are considered the Class A higher end, which has a 4.6 percent vacancy rate, according to REIS. Their average rent is $1,294 a month.

Reis reported that some of the recent completions were the 360-unit Elysian at Flamingo complex in west Las Vegas from The Calida Group, which has four projects planned or proposed. The 368-Elysian at Hughes Center is under construction at Howard Hughes Parkway and Sands Avenue. It has also proposed a 224-unit Edmond Street apartment development. TRU Development has completed a 210-unit Kaktus Life in Southeast Las Vegas.

In June, Aspen Heights and Canyon Partners broke ground on 290 apartments in Symphony Park in downtown Las Vegas. It will feature 4,300 square feet of ground floor restaurant and retail space.

Among the 2,068 apartments under construction as the third quarter began in July was the 410-unit second phase of the Rochelle Apartments at 4350 Hualapai Way in west Las Vegas by Westcorp Management, which was expected to be completed during the summer. Others expected to be done this summer are the 362-unit Trend complex, 240 E. Silverado Ranch Blvd., from Pier Construction and Development and Ovation Development’s 285-unit Aspire at Sunridge in Henderson.

In its report, REIS talked the investment in Las Vegas apartment properties that started to explode in 2016 when it reached more than $2.1 billion in transactions. It increased to $2.3 billion in 2017 before falling to $1.7 billion with 67 sales in 2018.

Matthew Schreck, a senior quantitative strategist with Ten-X Commercial, a commercial real estate sales platform, said Las Vegas has been ranked the No. 2 buy market for the nation for apartments because of its rent growth and vacancy rate. He cited data from Real Capital Analytics that shows “investors are flocking to Las Vegas multifamily properties.” The transaction volume topped $1.1 billion in the second quarter, a new all-time record for a single quarter, he said. He said the sales price per square foot was an all-time high, up 21 percent year-over-year.

“Vegas came in at No. 2 in our rankings because it’s got a lot of things working in its favor,” Schreck said. “It’s got a strong and diversifying economy, adding a lot of jobs, has good wage growth, different types of jobs to help the volatility going forward, and population growth has been good. It also remains relatively affordable compared to the more expensive Bay Area market or places like Los Angeles or San Diego. Even as rents are rising, you still need affordability. That’s keeping demand strong.”

Older complexes are selling as well. Northcap Commercial Multifamily reported a sale closed on July 31 for 36 units for a complex built in 1960 at 2575 Sherwood St. in Las Vegas. The sales price was $2.79 million or $77,500 a unit, according to Northcap.