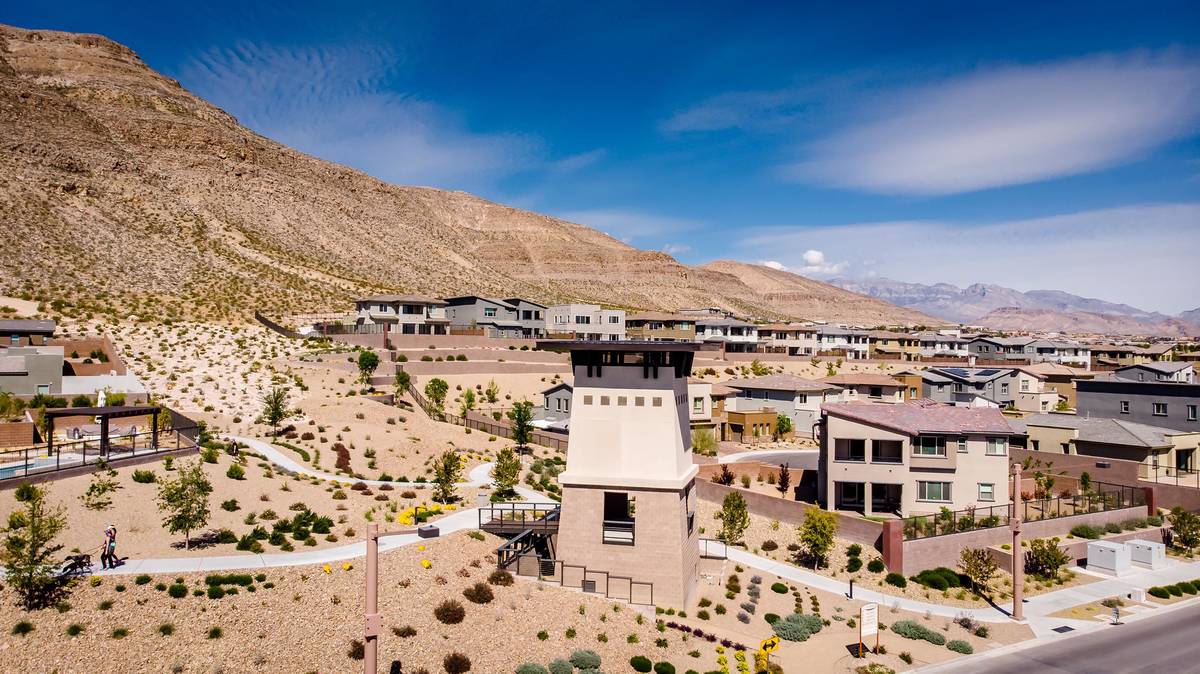 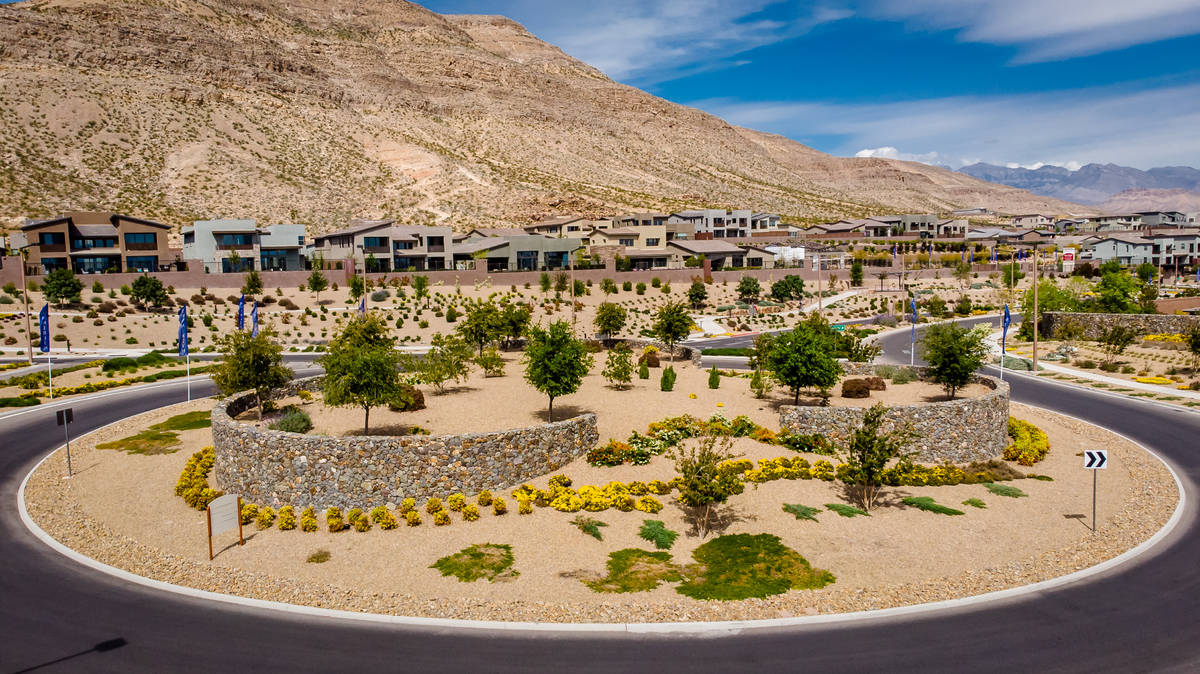 Las Vegas master-planned community developers reported an increase of sales over 2019. Summerlin was ranked No. 1 in the valley. (Summerlin)

Thanks to Valley Vista in North Las Vegas, sales in the Las Vegas Valley’s top dozen planned communities rose nearly 15 percent through the first nine months of 2020, and builders and developers said there are no signs of any slowing down despite the COVID-19 pandemic.

Las Vegas planned communities had a strong third quarter that helped boost their yearly individual totals, coming close to or surpassing what they did in 2019. The top dozen communities as whole had 4,453 sales January through September,+ the most recent month available, according to Home Builders Research. Those same planned communities had 3,889 through the same period in 2019, the research firm reported.

Coming in as No. 1 for 2020 new home sales is Summerlin, a perennial top-five master plan — a term used to describe select communities with parks, retail and other amenities — in the nation. It recorded 414 sales between July and September, a 20 percent gain over the third quarter of 2019. For the first nine months of 2020, it had 982 sales, 4 percent fewer than the 1,024 through three quarters of 2019, according to Home Builders Research.

For the year, Valley Vista has sold 792 homes, up from 232 through the same period a year ago, and is the No. 2 seller in Las Vegas, Home Builders research reported.

Excluding Valley Vista, a project of D.R. Horton, which opened in 2018, there were 3,661 sales in the valley through the first nine months, four more than a year ago.

“That’s a big one for sure in Valley Vista,” said Andrew Smith, president of Home Builders Research. “They have more communities coming online and hitting their sweet spot in getting things going. That’s where the majority of the lots are. There aren’t big chunks of lots out there within a master plan.”

Smith said the rebound in the new-home market began in June and remained consistent through the third quarter. After the first quarter, new-home building permits were up 15 percent versus 2019. After the second quarter, they were trailing 2019 by 11 percent, he said.

New home net sales — new contracts minus cancellations — ended the first quarter up “an impressive 21 percent” before ending the second quarter down 5 percent year to year, Smith said. After the third quarter, the market is on pace to surpass the 2019 total by 5 percent.

Smith said customer traffic in communities remains strong and shows no signs of slowing. Last week, Nevada Gov. Steve Sisolak asked people to stay at home as much as possible.

Lennar was second with 1,115 sales, a decline of 12.1 percent from 2019. KB Home was third with 1,068, an 18.4 percent decline despite having the most sales during the third quarter, Smith said. The total fell because of a high number of cancellations during the second quarter, he said.

“They are also capitalizing on the current popularity of the North Las Vegas sub-market with over 54 percent of their total 2020 net sales occurring there,” Smith said.

Private builder Touchstone Living had the most sales in any community during the third quarter with 69, Smith said.

“Touchstone Living’s transition from primarily larger, detached products usually in the upper-tier price ranges into the attached product space with their Mosaic community in the south sub-market area is leading all projects in net sales in the third quarter,” Smith said. “For context, in 2019 Touchstone reported 139 net sales for the entire year across six communities. Since opening in late March, right in the middle of the COVID-19 shutdown, Mosaic has reported 152 net sales (through the third quarter).”

Cheryl Gowan, vice president of marketing for Cadence, said, “Given a pandemic, it’s been a very good year.” She credits low interest rates around 3 percent that helps people get a larger home.

“Folks are also looking at their current situation and if their housing needs and whether they need an extra bedroom or a study or den,” Gowan said. “Or they want a larger kitchen because they’re home more and doing more cooking. Some people may think they have too big of a house and want to scale back. Some folks want the yard. Some want an extra bedroom. Some want a gourmet kitchen.”

“We have first-time homebuyers and folks who are looking to move up and scale down,” Gowan said. “It’s across the board. We only have the $40 homeowners association assessment, so that makes it affordable. We get some from out of state, but most are coming from Henderson and the surrounding Las Vegas area. Some own homes, and some of them were renting.”

Much of the focus goes to west Henderson with the Raiders practice facility. Gowan said there’s a lot of growth in east Henderson that “flies under the radar.” She said they expect the strong sales to continue.

“We continue to see steady numbers,” Gowan said. “We will be adding Century Homes next year and probably start selling in the summer. Harmony will be getting started. We are looking to a strong start to 2021.”

The Villages at Tule Springs, a master plan in North Las Vegas, sold 143 homes in the third quarter, down from 153 a year ago in the third quarter. For the year, it has sold 419 homes, 7 percent higher than the 392 through the first nine months of 2019. It is ranked No. 5.

Brian Kunec, president and regional general manager of KB’s Las Vegas and Seattle divisions, which builds in Summerlin, Inspirada and Villages at Tule Springs, said the market is doing well and driven by a lack of supply with more buyers than sellers. Historic low mortgage rates are making a difference too by making buying more affordable, he said.

“Master plans are always successful because people love living in them because they’re safe and come with tons of amenities,” Kunec said. “Inspirada, Summerlin and Tule Springs are no exception to that. If they can afford it, they prefer a master plan over a normal subdivision in the valley.”

No. 7 is Lake Las Vegas, the east Henderson resort master plan. The 85 sales in the third quarter were three times the 28 in the same three-month period of 2019. A strong summer bolstered Lake Las Vegas to 191 sales through the end of September. That is up 45 percent for the first nine months of 2020. There were 132 sales from January through September 2019.

No. 10 is planned community Sedona Ranch in North Las Vegas with 132 sales, down from 168 a year ago.