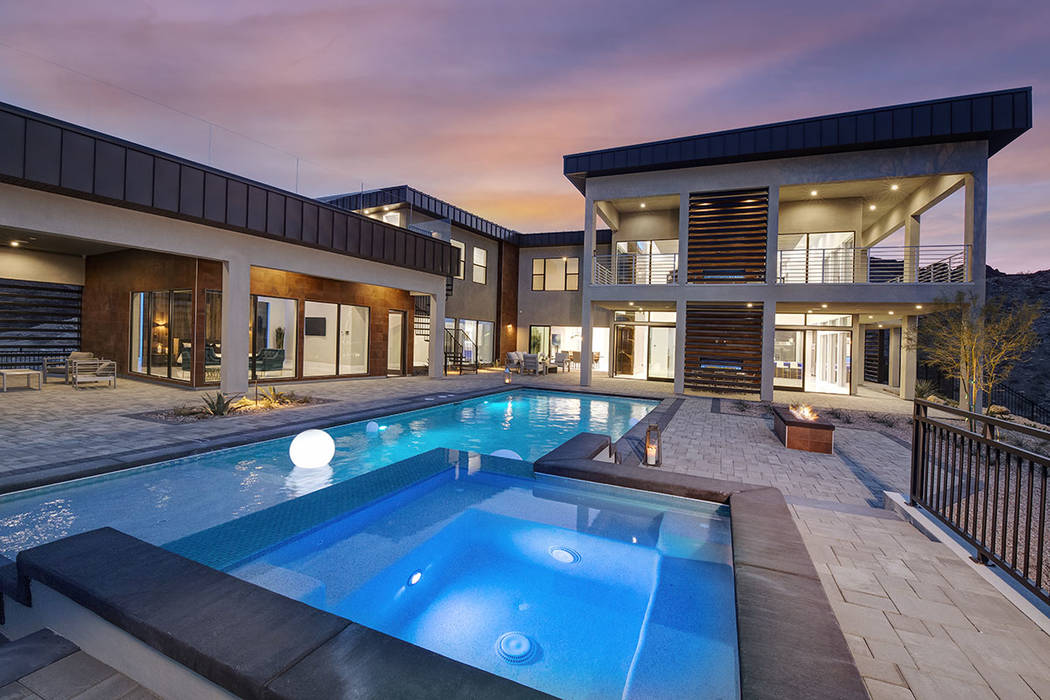 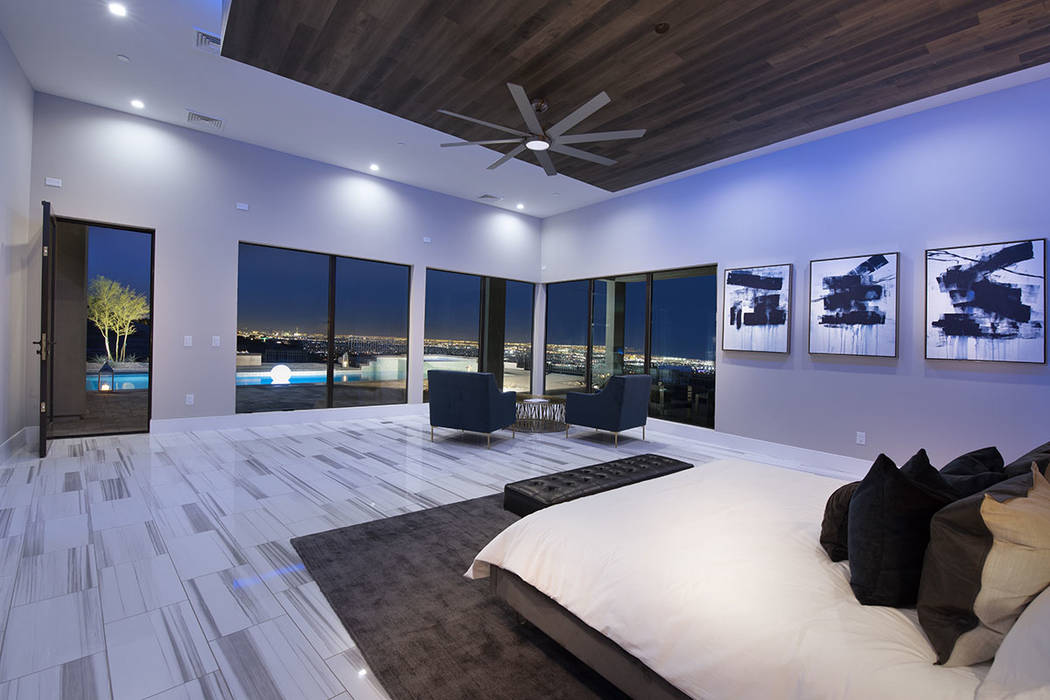 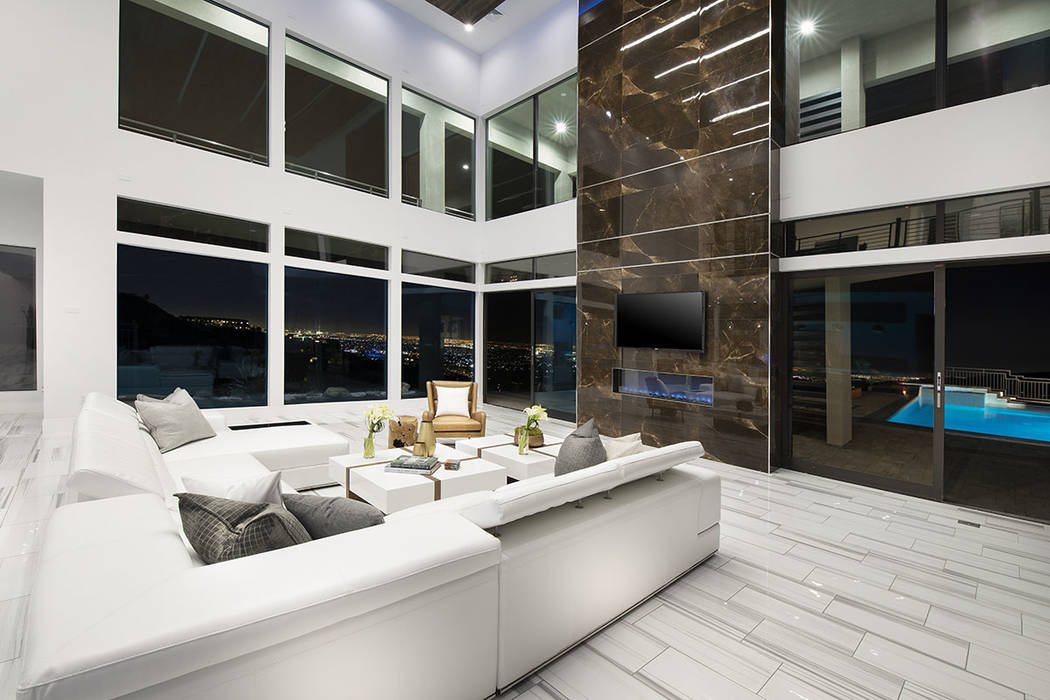 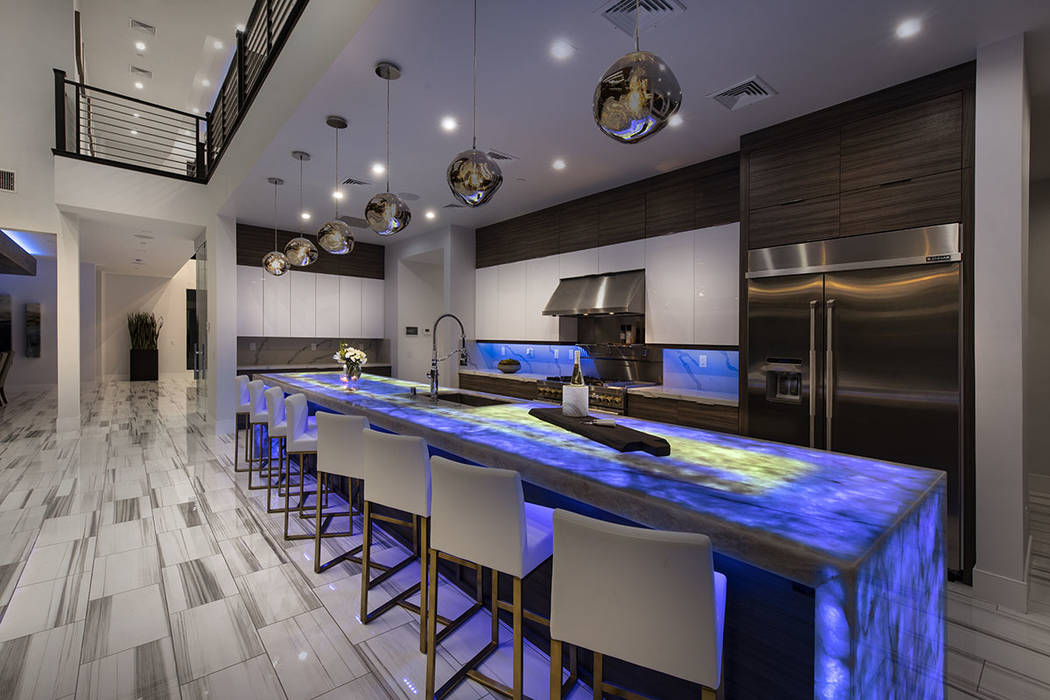 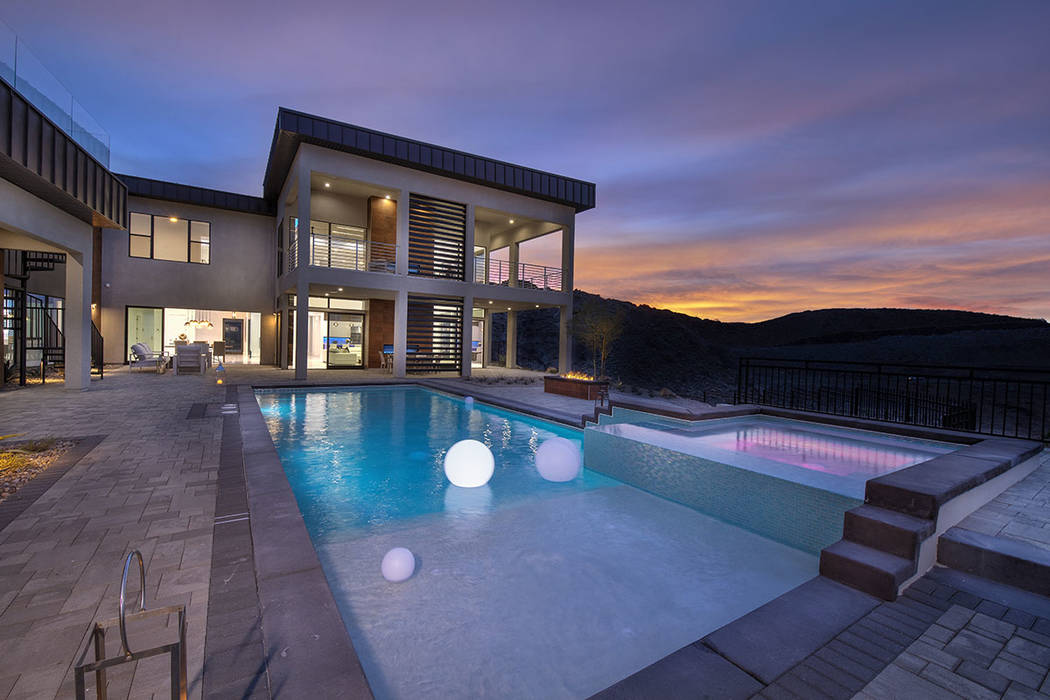 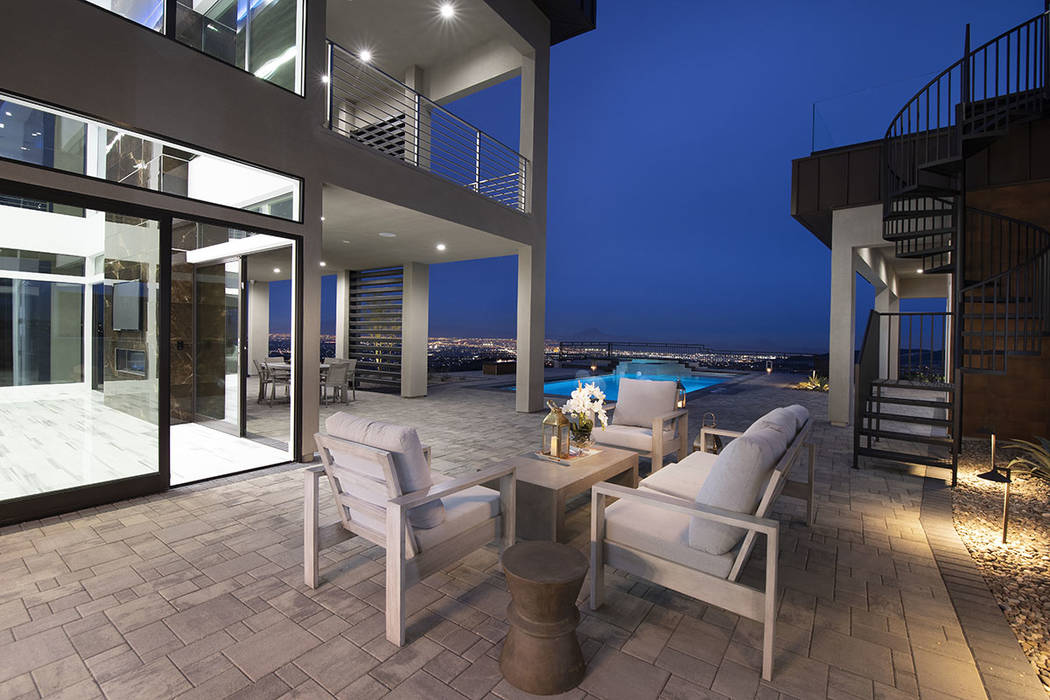 A sitting area is near the pool. (Synergy Sotheby’s International Realty) 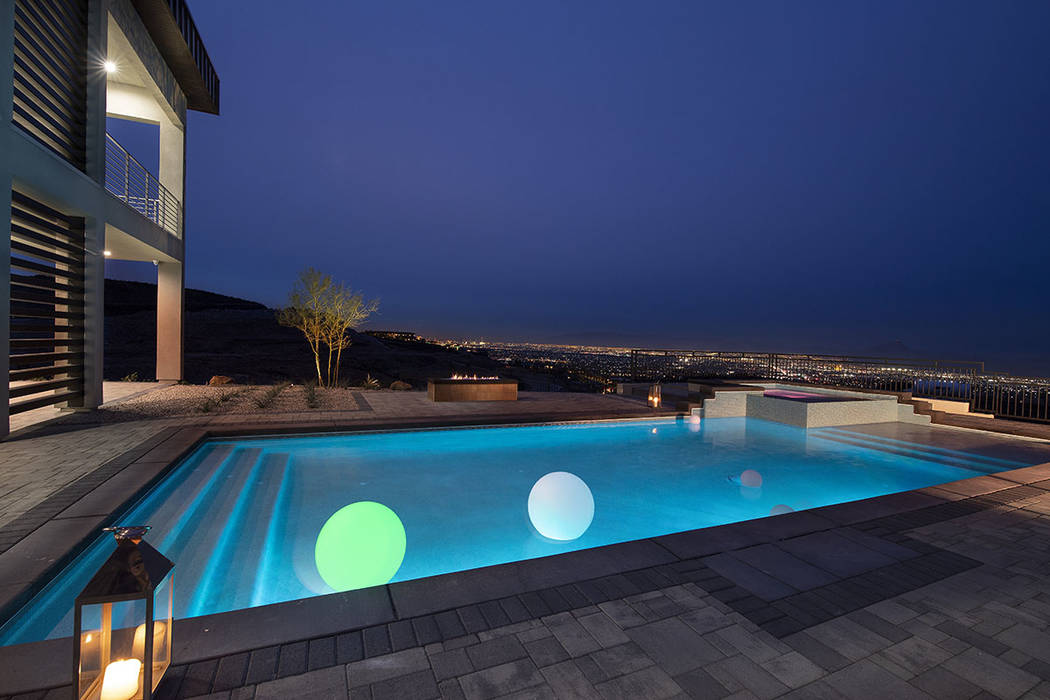 The home has sweeping views of the valley. (Synergy Sotheby’s International Realty) 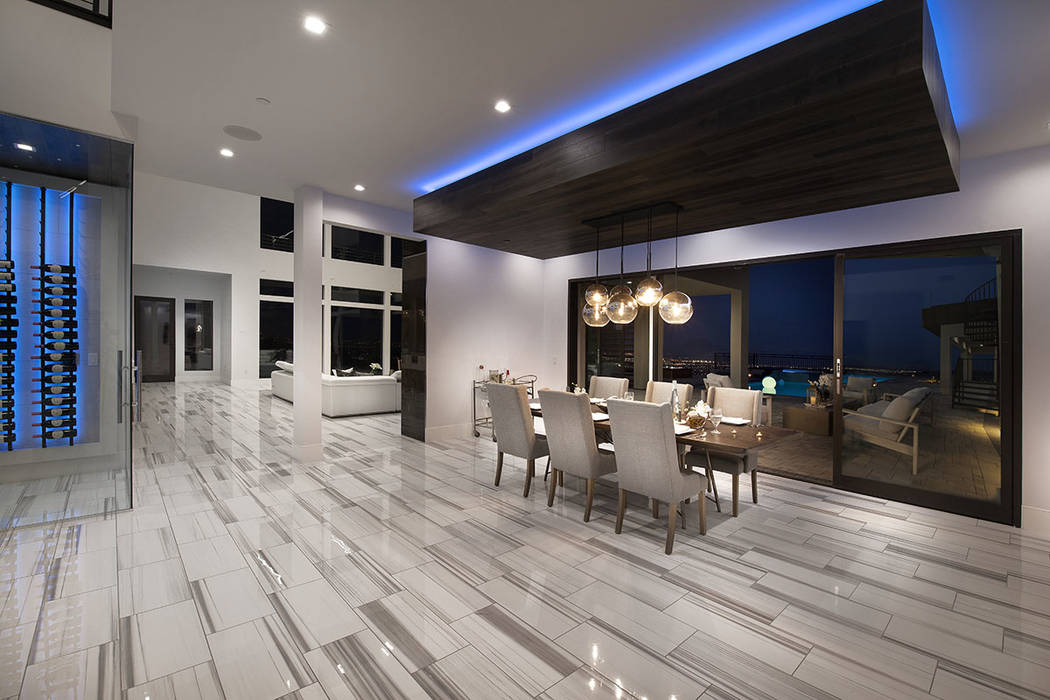 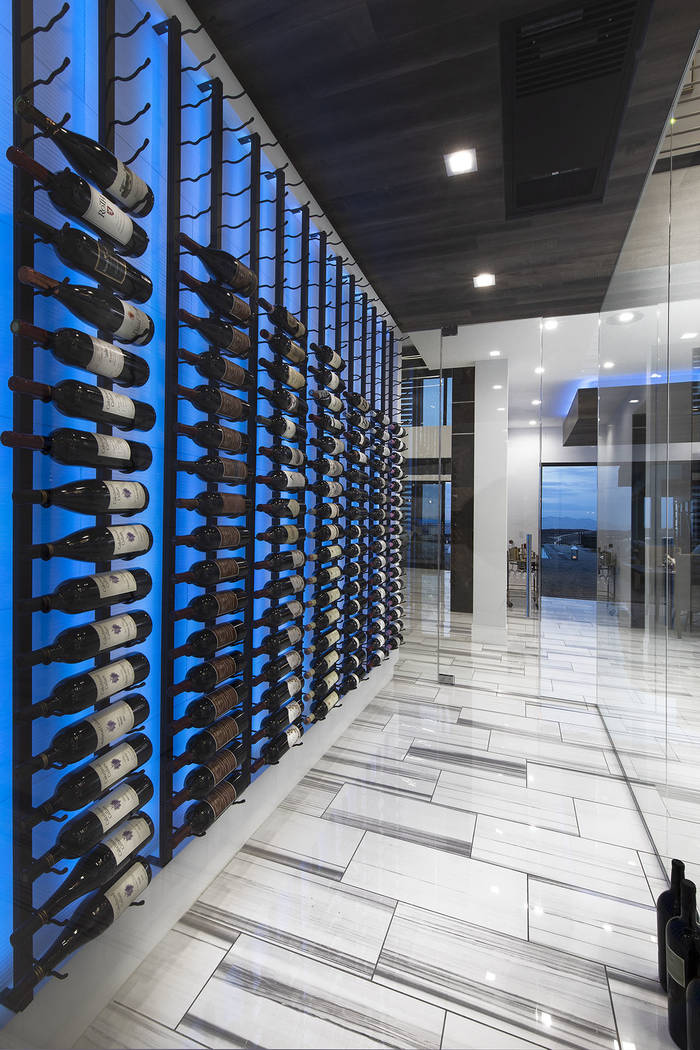 The home's wine wall is next to the dining room. (Synergy Sotheby’s International Realty) 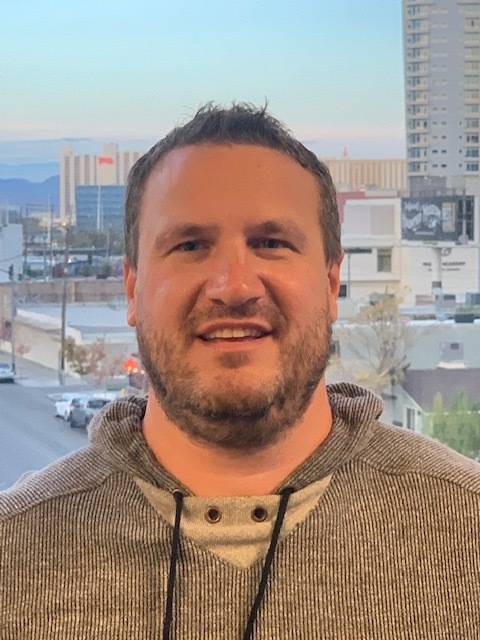 The small family-owned Las Vegas builder that constructed more than 100 homes a year prior to the housing downturn a decade ago went from 45 employees at its peak down to four, including himself and his mother, Barbara Hughes.

When many small builders went out of business, Metzka, the company’s president and CEO, was down to himself and a foreman running tenant improvement jobs of sandwich shops and restaurants while he dealt with $50 million in debt for guaranteeing loans for development projects and land acquisition outside his company.

Metzka, who said he did not take a paycheck from Edward Homes between 2010 and 2018, oversaw the company’s resurgence starting with building commercial projects, building skilled nursing, assisted facilities and geriatric hospitals, including some out of state, and being one of the leaders in the construction industry starting in 2015 by building town home projects. Edward Homes has been averaging about 50 homes a year and expects to do even more going forward.

But nothing symbolizes Edward Homes’ resurgence of a phoenix rising from the ashes than its multimillion spec home Metzka built in MacDonald Highlands that brought Realtors from across Las Vegas to see for the first time during an open house in November.

The 8,600-square-foot home at 629 Dragon Peak Court sits on a cliff that overlooks DragonRidge Country Club and the Las Vegas Strip. The two-story home with a modern design has five bedrooms with their own outdoor decks, seven baths and a six-car garage.

“It’s super glamorous and a showstopper,” Routh-Silberman said. “It’s modern and loaded with amenities with five bedrooms, so it’s versatile. It can be for people that entertain and have a lot of guests or a big family. It has a lot of characteristics of a house in California, and somebody from California will instantly relate to the house.”

There’s a 4K THX surround sound movie theater, glass wine cellar, office game loft, pool and spa and outdoor fire lounges and roof deck over the master bedroom. The second-floor deck of 800 square feet is adjacent to the game loft and has an outdoor fireplace.

The 44-year-old Metzka acted content and like a proud papa with a newborn as he showed off the home and talked about it, and where his company has returned to since the Great Recession.

The Youngstown, Ohio, native went to college for nursing after his experience of his dad dying of cancer when he was 8. Metzka ultimately changed course and followed in the footsteps of his stepdad, who owned an Ohio general contracting company. He ran job sites on housing projects in the summers during high school and college, and when his parents moved to Las Vegas in 1997, he followed suit a year later.

Metzka began buying three-plex and four-plex lots in Pahrump like his parents, Barbara and Gary Hughes, and the trio started building homes.

As the market slowed and ultimately collapsed, a company that had 45 employees dropped to four and moved into commercial work and apartments and away from single-family homes, since most of its housing construction stopped in 2009.

That was a time Metzka was dealing with his debt from his loan guarantees outside the scope of Edward Homes.

By 2015, Metzka saw an opportunity and went full steam ahead with town homes and condos. He has worked on projects such as the 47-unit Coronado condos in Summerlin; a 12-unit town home project in Inspirada in Henderson called City Lofts; 21 town homes in northwest Las Vegas; and taking over the Vita Bella town home project from Toll Brothers in Lake Las Vegas, building 24 units. There are other town home projects under construction and planned to start in early 2020. A 150-unit apartment complex will start at the end of 2020. The company is also building an assisted living facility and memory care center in the valley.

Building a home in MacDonald Highlands wasn’t on Metzka’s radar until attorney Tony Sgro asked him if he wanted to buy the parcel after deciding not to build a home on the lot. Metzka didn’t want it for himself, because he was building his own multimillion home on 1.5 acres near Eastern Avenue and the 215 Beltway and wanted a large yard for his two children to play on a basketball court, have a playground and ride their bikes.

“I bought it because of the views and the luxury market was hot,” Metzka said. “We were going to build a smaller home, but we didn’t want to ruin the lot. We wanted to capture the view and everybody has their own deck to hang out. This is our Pacific Ocean. I would have kept it in a heartbeat if I didn’t have kids, but wanted my home to have a backyard.”

Metzka said he wasn’t concerned about building a spec home without having a buyer lined up. He said the company is in a good position and can be patient until the right person comes along to buy.

Metzka said he wasn’t willing to wait for someone to come along and ask for a home to be custom designed, because that can be a lengthy and arduous process with people changing plans mid-construction. It can cost a builder time and money.

“Dealing with buyers can be fickle (business), because a lot of them can’t see the house, and it can take two years to build instead of one,” Metzka said. “We have some interested buyers and hope to sell it by the end of the year.”

Once they sell the home, Metzka said they are looking to buy additional lots and build in MacDonald Highlands.

“MacDonald Highlands (developer Rich McDonald) is pro-growth, but he does it right,” Metzka said.

Edward Homes is in a good position, Metzka said. It has 30 employees, which is down from the 45 at the peak, but the company owns its own drywall and painting company and getting to launch a flooring company. Overall, Metzka has 70 employees and is now eyeing projects in Reno, Arizona and California and will continue to focus on town home projects here under $350,000 because land is so costly to build single-family homes, he said. There are plans for a town home project in Summerlin in 2020 for units priced above $400,000.

“We’re planning on growth,” Metzka said. “We have a lot of investors and cash. Some of the projects we do we’re returning high teens and lows 20s percent cash per year. We’re doing well. I have gone through the downturn and don’t want to be there again. We’re in a cash-plush position and have very little debt.”

That made Metzka recall how tough it was going through the recession and in trying to pay off his $50 million debt with no intention of filing for bankruptcy. He called it a “rough time” but said he “looked people in the eye” and told them what he has and that he would work with them.

“I went through a hard time and spent a lot of time in court and dealing with attorneys and people suing me,” he said.

Metzka said he felt he let his family down and has learned his lesson not to guarantee loans in which other people had control. He said he was honest with people and fought to make them whole and paid off the last person he owed in 2015 and is only looking forward.

“I think it was a good time now when I look back,” Metzka said. “I learned a lot. I had an (older) partner with $125 million who lost a lot. I’m young and had a chance to make it back. I respect money in a whole different light.”

Metzka said he feels good about where the housing market is today in Las Vegas. He said he doesn’t expect it to crash again like it did last decade, and it’s likely to slow down at some point but it’s still doing well.

Metzka appears content. He said he enjoys working with his team, and his mom is a mother to everyone in the office. He looked back to where he was and where he’s gotten today, and he recalled paying off the last of the debt to someone who had forgotten about it.

“It was around Christmas time in 2015 when I cut that last check (for $170,000), and I felt it after that. It was big for me. I gave my word. I have two young kids, and money means nothing to me. Being a business success is a big deal. When someone walks by something I built and say they like it, that means something to me. I want to leave my legacy to my kids.”