Skip to content
Sign up for our newsletter
section-ads_high_impact_1
BY BUCK WARGO SPECIAL TO LAS VEGAS BUSINESS PRESS
March 12, 2019 - 10:46 am 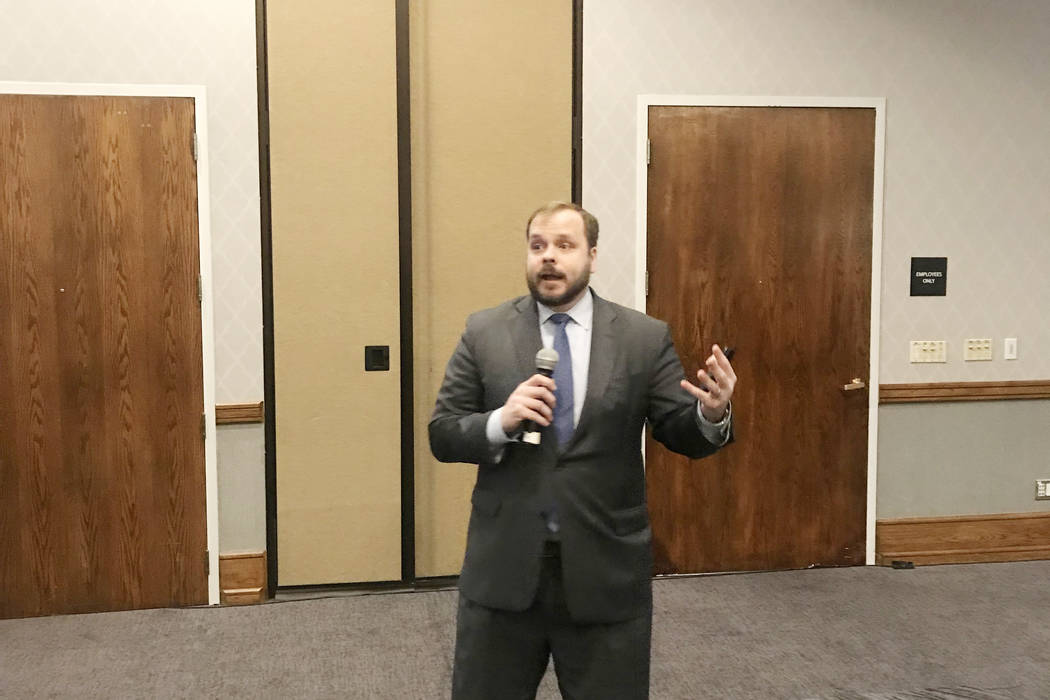 A deputy chief economist with Federal Home Mortgage Corp. said while existing home sales and new construction has been down in markets like Las Vegas since the fall, Southern Nevada is primed to do well over the next two years because of strong job growth and relocation of Californians.

Leonard Kiefer served as the keynote speaker at an affordable lending seminar hosted by Guild Mortgage on March 5 at the Hampton Inn Tropicana. He said he remains bullish on the housing market over the next decade because builders haven’t constructed homes to excess like they did in the 2000s and upward trend of millennials becoming first-time homebuyers, which he said should continue.

Kiefer said he has a more optimistic view of the housing market’s direction and economy than other analysts.

The National Association of Business Economics did a recent survey, of which Kiefer participated, that showed more than half said they expected a recession by 2021. Kiefer said he’s one of the economists who don’t think that will happen because of the housing market.

“There’s this notion that the economy is more vulnerable than it has been at any point since the recovery began in 2009,” Kiefer said. “When it comes to real estate, I’m a lot more optimistic so that’s why I was in the minority in thinking we will retain a moderate growth projection for the U.S. economy. I look at the housing market and think it has a really good story to tell.”

Kiefer said the labor market is in great shape and unemployment rate is near historic lows. It’s “particularly strong in Vegas” where it is above the national average that that bodes well for the local economy to perform.

The trend in the Las Vegas housing market based on the latest report from the Greater Las Vegas Association of Realtors shows Southern Nevada is following the national trend of an increasing housing supply and fewer sales. Prices have even been coming down lately to spur sales and Realtors speculate there will be a slower spring sales season than in recent years.

Kiefer said he expects continued moderation in Las Vegas housing market trends as supply and demand move back toward balance. Favorable demographics will support activity because of pent-up demand, he said. The homeownership rate is starting to surge after falling sharply after the Great Recession, he added.

What’s a key is an expected continued decline in interest rates that reached 5 percent last fall for the 30-year fixed rate, Kiefer said. He said that’s fallen to 4.35 percent most recently.

“That increase in rates really hit the housing market hard,” Kiefer said. “That caused a slowdown in construction and sales. Looking ahead, we’re feeling good and the rates are back down and that may give us a lift in terms of overall housing market activity.”

There continues to be challenges, Kiefer said, even for markets like Las Vegas with the imbalance between demand and housing supply. There’s not enough affordable housing being created and available on the resale market, he said.

“Vegas is building a lot more than the average, but they’re not adding supply in California. You had 10,000 people move here from Los Angeles County alone in 2018,” Kiefer said.

That’s putting pressure on the lack of supply and hitting young adults, looking to buy their first home, the most, Kiefer said. Homeownership rates had fallen overall since 2000 because of less affordable housing, he said. While Las Vegas home prices rose 10 percent overall over the past year, it’s gone up 20 percent for the affordable home sector, Kiefer said.

“It’s the lowest price where the demand is the strongest, and there’s the most volatility,” Kiefer said. “Those affordable houses are tough to get. They’re not building enough housing and there’s a lot of in migration coming in, and people are competing for those and that’s pushing up prices.”

Kiefer said it’s tough to find homes for qualified borrowers, and that trend should continue this spring and into next year until more affordable housing is built. That’s what has been driving a lot of town home construction by Las Vegas builders to meet that demand of lower priced housing.

“Millennials are showing up and first-time buyers are moving the market,” Kiefer said. “I think as interest rates moderate in 2019, we will have a bounce back in housing. Overall, the housing market is in good place for solid growth over the next two years.”

In its March report, SalesTraq said the start of the sales year has been a lull compared to 2018 but with population and employment growth robust, demand for housing is expected to continue.

That’s why builders have started construction on nearly 11,000 new homes over the past year, which is an 11 percent gain.

As for the resale market, the firm noted that some of the prices requested by sellers are too high and need to come down in order to sell.

At the event, Guild Mortgage outlined its 3-2-1 mortgage program that allows people to purchase a home with as little as 3 percent down. Guild provides a $2,000 Home Depot Gift Card and $1,500 grant that can be applied toward closing costs or for increasing the down payment.