Skip to content
Sign up for our newsletter
section-ads_high_impact_1
By BUCK WARGO SPECIAL TO LAS VEGAS BUSINESS PRESS
August 21, 2016 - 8:30 am 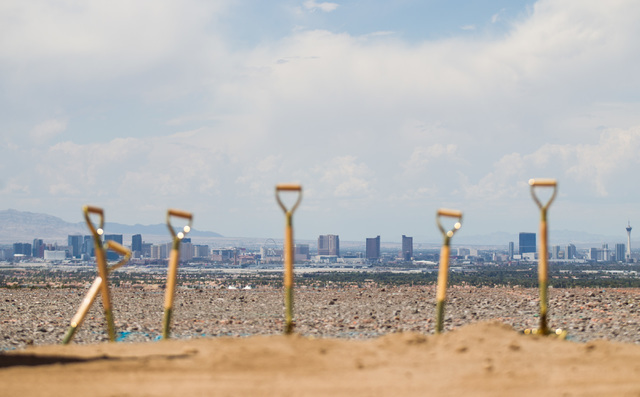 Shovels are seen following the groundbreaking of the first home to be built in Ascaya, a luxury home development, in the hills of the McCullough mountain range in Henderson on July 7, 2015. (Chase Stevens/Las Vegas Business Press)

Brokers and sales agents of luxury developments said lot sales and interest in their properties is up, a trend that is showing no signs of slowing down.

The Summit Club, a 555-acre country club community under development in Summerlin, is in the process of closing on half of the 140 custom home lots it has on the market, with an average price range between $3 million and $3.5 million. Homes started closing in May.

MacDonald Highlands, a 1,200-acre Henderson luxury master-planned community with about 600 residents, golf course and restaurant, announced it has sold 10 lots in 2016 and that another six are in escrow, surpassing what it sold in 2015. Thus far August alone, MacDonald Highlands has made six sales.

Ascaya, developed by Chinese billionaire Henry Cheng, who spent $290 million preparing 313 lots for sale in 2009 before taking them off the market for five years, has sold four lots in the last two months. The mountain development 1,000 feet above the city had sold 14 lots in the previous 20 months with an average lot price of $1 million. The highest priced lot is $4.9 million.

In The Ridges, a 793-acre luxury community in Summerlin, only 20 of 118 lots at the Azure development are still available. Seven lots have sold this year, with an average price of $1 million.

Dennis Smith, president of Las Vegas-based Home Builders Research Inc., said there are no readily available statistics in the marketplace tracking high-end lot sales, but based on anecdotal evidence and announcements by developers, there’s definitely a demand for the lots to build custom homes in Summerlin and Henderson.

“The PR people say it’s the view, but in my opinion it’s the stock market,” Smith said. “If the stock market was going in the other direction, there wouldn’t be that many custom lot sales. The whole upper-end market has expanded, because the economy has improved and Vegas is still Vegas. If you got the money, you can do anything you want. Since the recession, Vegas is becoming more a place of the haves and have-nots.”

But it’s more than the economy, said Kristen Routh-Silberman, sales and marketing director at MacDonald Highlands and Realtor with Synergy Sotheby’s International Realty. Homeowners have seen their homes’ value rise to the point where they could put their homes on the market and move up to a higher-priced home that has better views of the Strip and the valley. There’s little interest in buying older homes with the Mediterranean design that’s considered outdated in Las Vegas, and there are not many contemporary design homes on the market, she said.

“These guys can have a brand-new house with all the latest technology and contemporary architecture and great floor plans and fantastic new finishes for about $350-per-square-foot and that’s exactly what the resale market is asking for a 15-year-old home that’s Mediterranean and doesn’t have a view,” Routh-Silberman said.

Luxury homebuilder Blue Heron said it’s building 12 custom homes and has seven more in design, including four in The Summit Club, where the developer said home construction will begin by the end of the year. Blue Heron Principal Tyler Jones said 2016 has been better than 2015 and expects 2017 to be even bigger for the company, which builds homes ranging from $1.5 million to more than $15 million.

“Three to four years back, when there was a big downturn in the housing market, people were defensive, but that’s all behind us now,” Jones said.

Jones credits the Summit Club’s “exciting new concept” that he said has done better than anyone could have expected and created momentum in the marketplace.

The joint venture between the Howard Hughes Corp. and Discovery Land Co. is building a golf course designed by Tom Fazio, who also designed Shadow Creek and Wynn Golf Club. It will have restaurants, fitness center, spa, tennis courts and a kid’s camp among its amenities.

It’s not cheap. In addition to millions for the lot, for which people had to put down 15 percent a year ago, some custom homes may run $10 million to $20 million. Membership in the club costs $150,000, and its dues are $27,000 a year. The homeowners association fees are $13,027 a year. The developer expects to sell the other half of the custom lots within two years.

“We’ve had this success with pre-sales before anything was there, which is truly remarkable,” said Mike Meldman, Discovery’s chairman and CEO. “There’s nothing like what we do in the market, and we’re getting people from all over the Vegas market and not just people in Summerlin because of the amenities we’re creating.

Once people experience and understand what we’re creating, it will sell faster and prices will go up.”

The development has reported that Las Vegas residents account for the bulk of the lot sales. Meldman said 85 percent are locals and the other 15 percent are primarily from California and Arizona.

There’s a lot of competition.

Some master plans, such as Ascaya, are making even more investments to spur additional lot sales. The first resident moved into the development in late July and construction is underway on a $25 million clubhouse.

Ascaya has started construction on five of a planned seven homes designed by architects who will serve to set the bar for people to use in construction, said Darin Marques, Ascaya’s sales manager and Realtor with Shapiro & Sher Group. The homes will measure as much as 9,000 square feet will cost as much as $8 million when completed.

“Definitely, when the development came back on the market in 2014, everybody was a little shy,” Marques said. “A lot of these buyers had been burned in 2007 and 2008 by other developments. The one thing they were nervous about was that (Mr. Cheng) had $290 million invested, and how do they know he will move forward. What he did with the clubhouse and homes is put in another $65 million this year and create momentum.”

The initial lot sales are geared for valley residents who want a better view, but Marques said he doesn’t look at The Summit Club as competition since Ascaya isn’t a golf community. Within 10 years, most of the demand in Ascaya will be from across the country and internationally, as prices go as high as $25 million to $30 million for lots at higher elevations, he said.

In the Ridges, Kevin Orrock, president of Summerlin for the Howard Hughes Corp., said a new community named Indigo will start selling 27 custom lots in the next month. The price point there will average $1 million and reach as high as $2 million.

“We think it will be very attractive because you’re only allowed to do single-story,” Orrock said.

What’s driving the demand in Summerlin and the rest of the valley is supply and demand, Orrock said. That’s the reason prices are increasing for custom lots. People want to get their own view lots to build their dream home before the opportunity is gone, he said.

“If you look at the Summit Club, it’s a very low number of custom lots, and in the Ridges there are 20 lots to buy,” Orrock said. Where else are you going to go, if you want to be on the west side of the valley.”

Another longtime Las Vegas development is looking to cash in on the renewed interest in high-end custom lots after the downturn in the housing market.

The lots will cost in excess of $1 million and some may cost $5 million, McClellan said. It’s good timing, because there’s renewed interest in custom homebuilding with construction lending loosened and people no longer having to build with their cash, he said.

“Other developments in the valley have had view lots for quite some time, and adding that to our inventory will be great,” McClellan said.