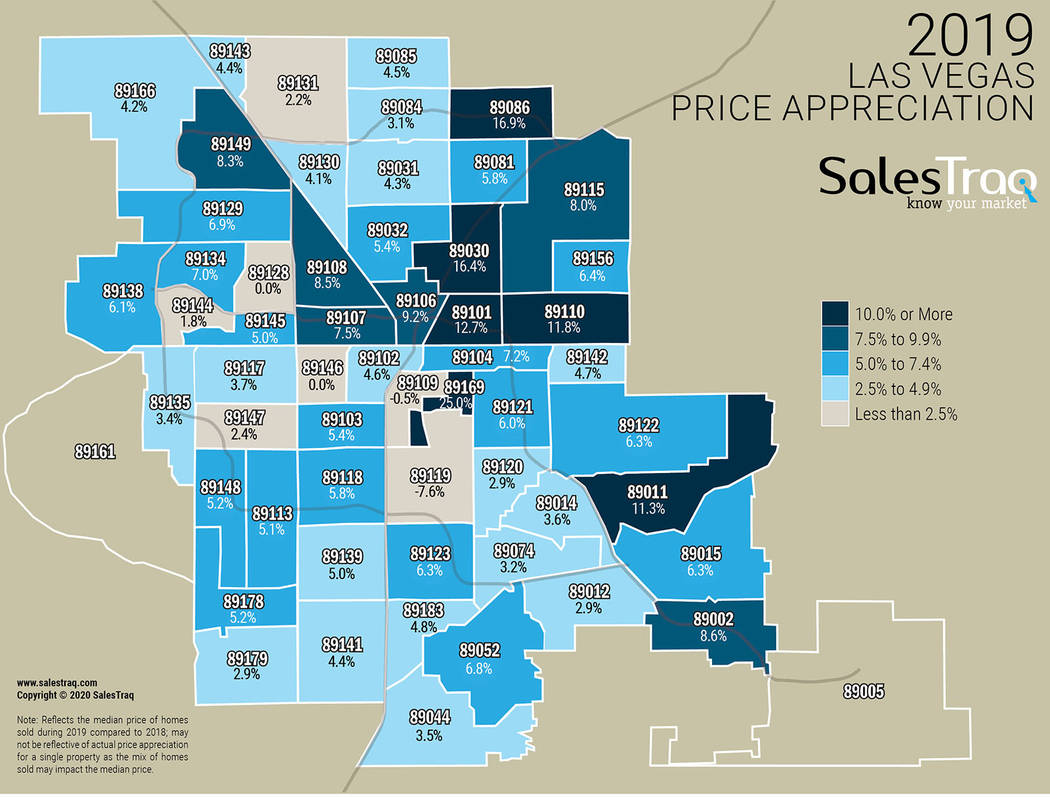 Summerlin, led by its communities The Vistas, The Paseos and The Ridges, along with Henderson swept the top five spots for having the highest median existing home price sales in 2019 — a year that showed overall price growth slowed in the valley and should continue to do so again in 2020, according to Brian Gordon, a principal at Applied Analysis whose firm prepared the annual report.

Gordon cited the report Thursday during a breakfast meeting of the Southern Nevada Home Builders Association at The Orleans. Although most ZIP codes have not fully recovered since the Great Recession, there have been great gains since 2011. The report shows only nine of 56 ZIP codes have surpassed their 2007 median value, while two were flat. Since 2011, however, 55 of 56 ZIP codes have seen their appreciation more than double, or in some cases increase more than 200 percent.

The majority of the highest-priced homes based on 2019 median values continue to be in or around master-planned communities with amenity-rich developments and those along the periphery of the urban valley, Gordon said. ZIP codes that include million-dollar residential communities help to elevate the overall medium price in that area.

The ZIP code that has appreciated the most since 2007 is 89166 in the Skye Canyon area in the northwest valley, which is up 16 percent. No other area is up double digits since the Great Recession. It is up 157 percent since 2011.

Las Vegas median existing homes are getting closer to recovering all of their price loss caused by the Great Recession but remain more than $11,500 away.

“We’re approaching that point where we were in 2006,” Gordon said. “The housing market is on a path of full recovery. We can argue today the housing market is better positioned than nearly 15 years ago. Today, incomes are better aligned with home prices and home prices are growing at a more sustainable pace of 2, 3, 4, 5 percent year over year so both are moving on a similar trend. The fundamentals of the economy are more sound with strong employment and population growth. We have a large development pipeline that will help support the housing market in the next 12 months.”

Only six of the Las Vegas Valley’s 56 ZIP codes reported double-digit price increase percentages in 2019 and only two reported declines, Gordon said. In 2018, some 49 ZIP codes saw increases of 10 percent or more.

“Over the prior couple of years we were seeing these 10 and 20 percent gains,” Gordon said. “Today, only a handful are reporting that and a majority are in that mid-single-digit range and 4, 5, 6 and 7 percent is not too bad when you are talking about the premium price ZIP codes in Summerlin and Henderson. It suggests the market is more stable and more sustainable and more realistic. The likelihood of massive fallout in terms of price point is pretty limited. That is better over the long haul.”

That also helps people looking to buy their first homes or who are moving to the market, according to Gordon who expects that low- to mid-single-digit increases in many ZIP codes in 2020.

“Home prices should stay in a very tight range in 2020 — within a few percentage points of where they stand now,” Gordon said. “Many of us aren’t building as much equity in our home as we once were when home prices were going up 20 to 25 percent year after year, but I like where we are at.”

Ryan Brault, regional director with research firm Metrostudy, said 2020 existing home sales should remain steady as long as interest rates remain low in the 4 percent range. He said Las Vegas will continue to benefit from migration from higher-cost states and it remains a low-risk market but doesn’t see a lot of movement from existing homeowners.

“Because interest rates have been so low for so long it is having an impact on housing tenure,” Brault said. “People are staying in their homes longer because prices have risen and there’s not a whole lot of incentive to move to be able to lock in lower-interest rates, especially for those locked in with refinancing and initial rate in the 3’s and pay a whole lot more with another house with a higher rate.”

The fastest-appreciating ZIP codes in Southern Nevada tended to be in neighborhoods in the central and more mature portions of the valley, Gordon said.

Only two ZIP codes in the top 10 fastest-appreciating were in the same list last year, the report said. Those were 89030 and 89106.