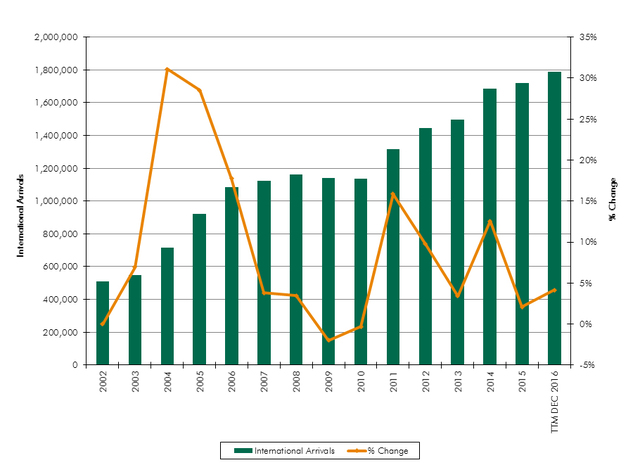 Percentage of international travelers coming to Las Vegas since 2002, based on data from McCarran International Airport. (Courtesy/CBRE)

The number of foreign investment dollars heading to the Las Vegas Strip has been on the rise in recent years. Capital supply chains from across the globe have headed toward projects such as the SLS, which is helping revitalize the north end of the resort corridor, and have brought investments reaching into the billions on megaprojects such as City Center.

One of the most recent additions to the Las Vegas Strip’s skyline, Lucky Dragon, also was touched by foreign investment.

Dave Jacoby, COO at Lucky Dragon, said the project was partially funded by investors using the EB-5 visa program, which is used to attract individuals looking to trade investment dollars for citizenship.

Lucky Dragon’s foreign backers who made financial stakes of at least $500,000 in the 203-room, Asian-themed resort are on the road to being granted a green card. Besides a monetary investment, the project also must qualify as a job creator.

The use of EB-5 has gained steam over the past several years. Nationally, the number of foreign entrepreneurs in fiscal year 2007 that started the process was just more than 700. That number rose to 14,373 in fiscal year 2015, according to data from the Department of U.S. Citizenship and Immigration Services.

Clearly, EB-5 is not just something used on the Strip.

Sam Nicholson, president of Grand Canyon Development Partners and the construction manager on the Lucky Dragon project, said he’s in talks on other projects with firms looking to use EB-5.

Negotiations were still ongoing on the potential investments, but Nicholson said they were close to downtown.

The Strip has seen some major investments with and without EB-5: Dubai World’s $2.7 billion investment for a 50 percent stake in City Center, along with purchasing $2.4 billion worth of MGM Resorts International stock; and Elad Properties of Israel investing $1.2 billion in 40 acres that once housed the New Frontier property. That same site was later sold to Crown Resorts for $280 million at the end of 2015, following the recession.

We might not see anything too soon from Crown; the group announced it was pulling out of the proposed Alon resort project in December 2016.

The Las Vegas investment community is also waiting on Malaysia-based Genting Group’s Resorts World project to be completed. At build out, the $4 billion Chinese-themed resort would add 3,000 rooms to the Strip.

Michael Parks, a member of CBRE’s global gaming group, said the resort corridor has slowed some due to the recession, and investors have been cautious. A large project such as Resorts World going into high gear, however, could be just the thing to get things moving.

“We haven’t had any new supply in the market in a number of years, and I think having more scale casino projects creates new interest in Las Vegas,” Parks said.

There is further interest for foreign investors on the Strip, Parks said.

“I still think at the end of the day, there’s people that recognize Las Vegas around the globe as a center of not only gaming but also hospitality and entertainment,” he said. “Having an investment on the Las Vegas Strip still has an appeal to people across the globe as being a good investment.”

Brent Pirosch, director of gaming consulting in CBRE’s global gaming group, said the flow of foreign travel to Las Vegas is about 15 to 17 percent of the total number of the more than 40 million that come to the Strip on an annual basis.

Pirosch said about 50 to 60 percent of foreign visitors come from Mexico and Canada, 20 to 25 percent from Europe and 15 percent from Asia.

Foreign visitation to the valley tends to have positive effects that were unintended. The typical international visitor tends to fill up rooms during slow periods, and they usually stay longer than domestic travelers, Pirosch said.

Designs on the Strip have also changed to attract the international gambler.

“I think we really saw it for the first time at Wynn, where the color schemes were all really dedicated toward attracting a foreign visitor,” Pirosch said. “The Bellagio was obviously the precursor to that, but Wynn and Encore really showed the color palettes.”

There has also been a rise in retail offerings and amenities that attract the foreign traveler, Pirosch said.

This increased presence of offerings for the foreign traveler, specifically for Asian tourists, has gone up around the resort corridor.