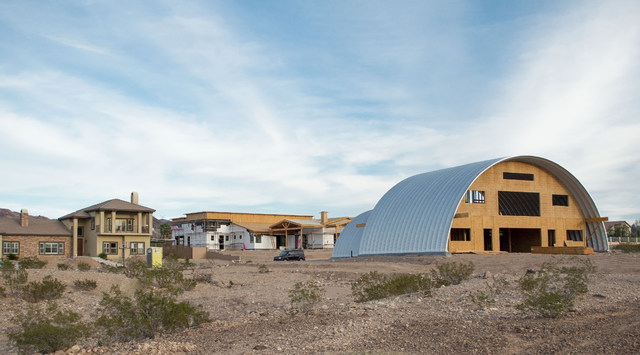 A new showcase home is coming to Henderson.

“Our goal as a design-build firm has always been to make green living easy and affordable without sacrificing strength, performance, safety and, of course, aesthetics,” said Aeron Tozier, founder of Global Living Systems and designer of the G Home. “A G Home is capable of living quietly, anywhere on the planet with a zero-carbon footprint. This is wonderful, liberating and guilt-free living.”

The designers said they expect the Henderson project to cost about $100 per square foot to build.

Scott Sanders Construction of Henderson is the general contractor.

Once the home is complete, it will serve as a venue for meetings, special events and public presentations showcasing G Home design and philosophy.

The seller was the original developer, Campbell Lodging, which built the properties in 2009. GE Capital Franchise Finance provided funding for the purchase, for which the terms and price were not disclosed.

David Mirharooni of Brickstar Capital, a partner in Solstar Investments, said the deal reflected the investors’ confidence in the Las Vegas marketplace.

Added Steve Barklis of Solana Advisors, also a partner in Solstar: “We are very excited about the acquisition of these two fine Marriott select service hotels. The hotels are already doing well. With a change in management and completion of a new property improvement plan, we expect both hotels to significantly outperform the market.

“I couldn’t be more excited to see this development come to fruition,” said Rick Harrison, owner of both the pawn shop and Pawn Plaza. “It is extremely rewarding to be a part of the revitalization of downtown Las Vegas and provide locals and tourists more reasons to return to the 700 block of the Strip.”