Skip to content
Sign up for our newsletter
section-ads_high_impact_1
BY BUCK WARGO SPECIAL TO THE LAS VEGAS BUSINESS PRESS
January 7, 2019 - 2:46 pm 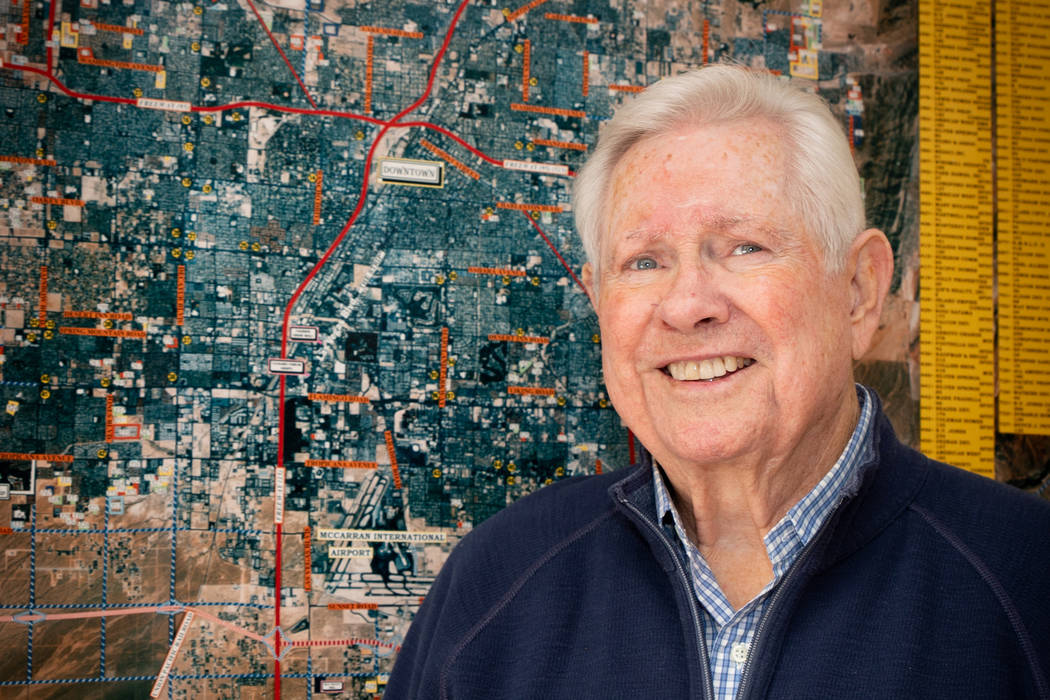 Longtime Greater Las Vegas Association of Realtors member and land broker Ken Gragson has been honored for his service to the trade organization.

The 82-year-old Las Vegas native was a member of the Nevada Gaming Commission from 1982 to 1991, and a former head of the GLVAR’s political action committee that raised money for candidates who protected property rights. He received the Jack Woodcock Distinguished Service Award at the organization’s yearly gala in December.

The son of former Las Vegas Mayor Oran Gragson, who served from 1959 to 1975, Gragson graduated from the University of Arizona with a degree in business administration and marketing and worked for his family’s furniture store until it closed in 1968. Later that year, he embarked on a career in real estate with his friend Al Levy with Levy Realty Co. and holds his license today under Barrett Realty.

Gragson has worked on the commercial side of the real estate industry, putting together groups that bought raw land, sometimes entitling it or upgrading lots, and then selling it to developers. Gragson would himself invest in many of his projects of all sizes and types from commercial corners to sites that would be developed as residential.

Starting in an era when billionaire Howard Hughes was buying up properties in Southern Nevada, one of his noteworthy projects was buying 120 acres of government-owned property in Henderson in 1969. They paid $200,000 and sold it in pieces decades later and reaped about $5 million, he said. The site. today. is where the Fiesta Henderson casino is at the 215 Beltway and 515 freeway.

Gragson estimates he’s syndicated at least 50 deals over his career, many of which were with the same group of investors. He also brokered other commercial deals on behalf of clients.

But Gragson said the sweetest moment is when he meets with investors and hands them checks on proceeds from their land sales. They once bought 2½ acres at the corner of Sunset Road and Rainbow Boulevard for $50,000 in the late 1960s and sold it about 15 years ago for $2 million, he said.

They bought land throughout the valley, even at a Bureau of Land Management auction in the late 1970s. When the valley was sparsely populated and there was virtually no development past Rainbow Boulevard, Gragson said they would tell people that someday there would be houses from the Sunrise Mountains to Red Rock. The most land he’s ever held at once was 3,000 acres in the late 1980s.

“Back in those days we would buy a piece of property, make it more valuable by adding roads, zoning and utilities and when it’s ready put it up for sale,” Gragson said.

Gragson said he hasn’t done any deals in four to five years, and it’s a much more difficult marketplace to compete in today with land prices so high. His son, Scott, who once worked with him and followed in his dad’s footsteps, is an executive vice president of the land division with Colliers International. His son, Todd, works for the city of Las Vegas.

Gragson said he and partners continue to hold properties, including in Arizona, and he personally has an investment at the Apex Industrial Park in North Las Vegas.

“There are opportunities out there but not ones I’m familiar with,” Gragson said.

Gragson said he and his partners came out OK during the Great Recession because they had sold a lot of their properties in time. He said he was hurt the most by investing money through lenders that loaned money to builders.

With the Great Recession behind the valley, Gragson said he remains bullish on Las Vegas and its future. The lone obstacle is the lack of water.

“If it wasn’t for the water, I would say we have just begun,” Gragson said. “If we’re able to solve that, there’s nothing holding us back. There’s a lot of land, lot of people and one of the best places in the world to come with our weather and taxes.”

Gragson said it will be vital for the BLM to open up more land for sale and that the state’s congressional delegation will have to help make that a reality.

“It’s just a matter of getting the utilities there,” Gragson said. “We got the wherewithal to develop.”

Woodcock said Gragson is deserving of the recognition for his involvement in the GLVAR and politics his entire life.

“He’s been a staunch supporter of our profession for 40-plus years,” Woodcock said. “He’s always made a commitment not only financially, but he’s an ardent supporter of being involved in politics and understanding that if real estate is your profession, politics has to be your business. He made it a point to get to know politicians and making sure they supported private property rights. He’s the ultimate private property rights advocate. I’ve learned a lot from Ken.”

Gragson is the grandfather of Noah Gragson, Scott’s son, a professional stock car racing driver and winner in the NASCAR Truck series.

Gragson was among several recipients of GLVAR annual awards distributed in December. Patty Kelley was named GLVAR’s Realtor of the Year for 2018. She is past president of the GLVAR and statewide Nevada Realtors.

— Robert Hamrick – Gene Nebeker Memorial Award for professionalism and service to the GLVAR and the community.