Skip to content
Sign up for our newsletter
section-ads_high_impact_1
BY BUCK WARGO SPECIAL TO THE LAS VEGAS BUSINESS PRESS
February 18, 2019 - 1:03 pm 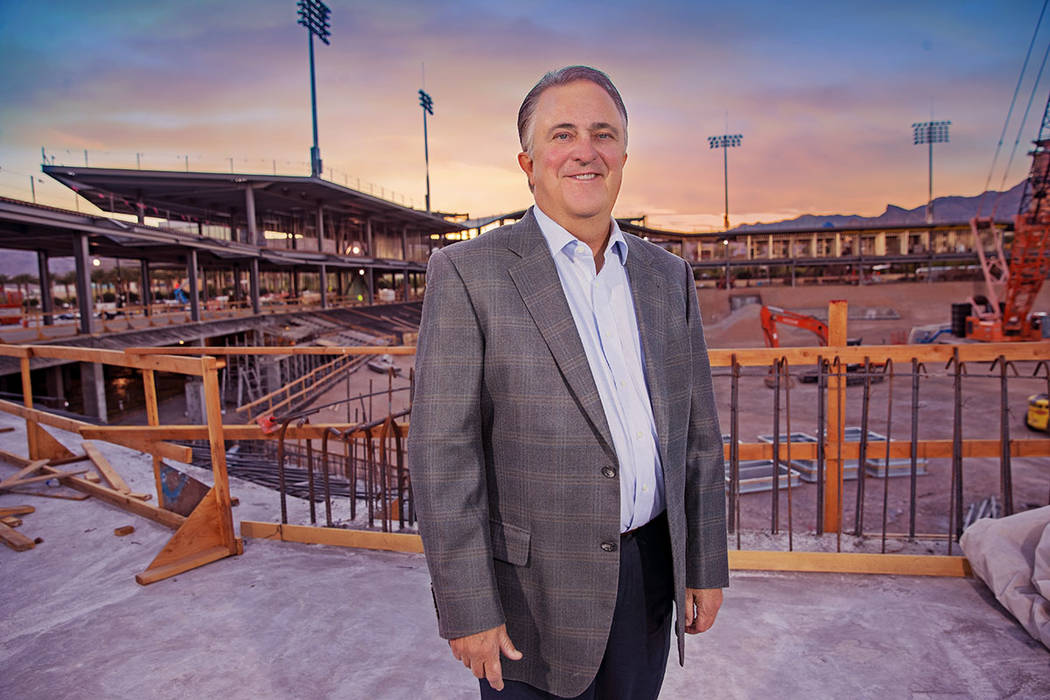 Don Logan, president and chief operating officer of the Las Vegas Aviators, and wife, Jen, are longtime residents of Summerlin. He stands near the construction site of the Las Vegas Ballpark. (Summerlin)

The Las Vegas Ballpark in Summerlin will be another amenity that attracts people to the master-planned community that moved up to No. 3 in the nation in 2018 in terms of sales.

Summerlin already has City National Arena, the practice facility of the Vegas Golden Knights, and Downtown Summerlin is a popular destination for local residents to shop and dine even if they don’t live there.

“We’re excited about it, and the community is really going to embrace the Las Vegas Ballpark and what we created them,” said Summerlin President Kevin Orrock. “There aren’t a lot of master plans in the country that can say they have an AAA stadium within their boundaries.”

The $150 million Las Vegas Ballpark in Summerlin built by the Howard Hughes Corp., the developer of the master-planned community, remains under construction and will be ready for the April 9 home opener for the Aviators, according to Orrock.

The annual Big League Weekend game involving the Chicago Cubs won’t be a late addition to the spring training schedule in March as many fans had hoped, Orrock said.

When Major League Baseball released its spring training schedule in August, the Las Vegas game was missing from the calendar but even Don Logan, president of the AAA baseball team that has been renamed the Aviators, said it has been a late addition even when it’s not on the initial schedule.

“We’re doing everything we can to open for the first game of the season,” Orrock said. “Because of the construction, it’s not conceivable we can commit to that and knowing the stadium would be open.”

The Big League Weekend that usually features the Cubs playing spring training games on two separate days will return in 2020, and Summerlin and Aviator officials are discussing bringing even more games to Las Vegas during spring training beyond those two with the Cubs. Even major college baseball programs could come to Las Vegas to play games at the stadium in the future.

Orrock said they’re working day and night to complete the stadium. It may look ready from the outside with the structure intact, but what people don’t see is the need to complete finishes within the building.

“There are all the interiors such as locker rooms, kitchens and club facilities and suites and all those finishes,” Orrock said.

Orrock said the grass will be installed in February, and the seats are being installed now. They are mesh and designed to be cooler in the summer heat. The stadium sits about 8 to 9 feet below the street and by being in Summerlin with its higher elevation will be about six to seven degrees cooler than Cashman Field where the Las Vegas 51s played, Orrock said.