Las Vegas’ four leading master-planned communities combined outperformed Southern Nevada’s housing market as a whole and have positioned themselves to again lead the way in 2020.

Sales in the master plans — Summerlin, Cadence, Inspirada and Skye Canyon — rose nearly 9 percent to 3,251 in 2019, up from 2,994 in 2018, despite a decline of 11 percent in Inspirada in Henderson. In contrast, overall net sales in Southern Nevada’s new home market were down about a 0.5 percent or some 55 sales in 2019, according to preliminary numbers from Home Builders Research President Andrew Smith.

The final 2019 numbers released by national real estate research firm RCLCO were bolstered by a strong and consistent sales volume in the second half of the year in Southern Nevada. When RCLCO released its report in July eyeing the first six months of 2019, sales in all four master plans were below their numbers in the January-through-June period of 2018 that was usually strong.

Summerlin in the west valley maintained its No. 3 ranking in the nation with 1,320 sales, two more than 2018.

What happened in Southern Nevada in 2019 mirrored what took place across the country, according to RCLCO. The 2019 top-selling master-planned communities’ list had total sales 8.6 percent higher than 2018. The Villages in Florida, with 2,429 home sales, was once again ranked as the top-selling community in the country. Sarasota, Florida’s Lakewood Ranch claimed the second overall spot ahead of Summerlin, the firm noted.

Nevada and Arizona each made significant strides in the rankings this year, representing 25 percent of top-50 sales combined, according to RCLCO.

Gregg Logan, the managing director of RCLCO, said what helped master plans in Las Vegas and elsewhere around the country during 2019 was addressing strong price increases in 2018. Many realized the best way to continue with strong sales was to hold down the median home prices, which moderated some in 2019, he said.

In addition, interest rates, which spiked at the end of 2018 to 5 percent and carried over to early 2019 and slowed some sales, went back down to below 4 percent. That helped fuel sales in master-planned communities, Logan said.

“We’re finding there is more demand for master plans than there is supply, and the challenge is — a lot of that — is for product under $300,000,” Logan said.

“People like master-planned communities. They prefer them if they can afford them. They do a lot in terms of creating an environment with parks and open space and recreational amenities. All that costs money, however, and developers look to recoup that and get a premium in the market. That makes it tricky to hit that under $300,000 mark. It’s being done successfully in communities that are diversifying their product and doing more small-lot single-family product, triplexes and town homes to more creative and broaden their market share and increase sales.”

That’s been the strategy in Southern Nevada master plans that in the last couple of years have focused on building more affordable housing with town homes and homes on smaller lots. Logan said combined with strong consumer confidence, especially in Nevada, where the economy is good and attracts California buyers, sales should remain solid in 2020.

“I think we’re heading into 2020 pretty strong,” Logan said. “The builders have been careful not to keep driving product at the higher end of the market because there’s not as much room for them to grow. Our sense is there’s strong demand, and the key will be communities being able to deliver a more diverse product and prices and sizes to meet the diversity of the market.”

Logan added, however, he’s concerned about Las Vegas remaining affordable if median home prices increase too much. The market set a record when prices for new single-family homes surpassed $410,000 in October, but that fell back closer to $390,000 in November.

Summerlin, which has been on the RCLCO top 10 list some 18 times in 26 years of the list’s history and No. 1 eight times between 1994 and 2002, said a focus on more affordability is part of their strategy opening up hundreds of acres for development north of Far Hills Avenue west of the 215 Beltway in 2020. The community named Redpoint will have homes on smaller lots and town homes and other attached product. Some prices will be in the high $200,000s in a master plan where the average home price is about $640,000.

“Redpoint signals the dawn of a new era in Summerlin where the focus is shifting to create higher-density residential districts but still designed in harmony with the surrounding natural environment,” said Summerlin President Kevin Orrock.

In 2020, 10 new communities are expected to open in Summerlin.

“Being right in that middle is a direction we want to go,” Orrock said. “We will always have the higher-priced product, but we want a diversity of prices and product and be a community for everybody.”

At Cadence, Cheryl Gowan, vice president of marketing, said it’s exciting to be on the top 10 list for the first time as the community is hitting its stride since the first home was sold in 2015.

“We had a great year in 2019,” Gowan said. “We had many more builder parcels that were ready and available and that’s helped. There was a good diversification of product available. Richmond American’s town home product created some affordability for those who were looking for lower than $300,000. The economy is doing well and people are feeling confident in buying a home.”

Gowan said they expect that trend to continue in 2020 with more builders offering products.

Brian Kunec, president and regional general manager of KB Home’s Las Vegas and Seattle divisions, attributes the decline from 2018 as part of the maturing of the master plan and not a reflection of any problems.

“Some of the other master plans have a lot of runway, but what you’re seeing is a shift at Inspirada,” Kunec said. “It’s a unique master plan owned by a builder group rather than development entities. We used to have five builders out there, and we’re down to three now because Beazer Homes is done and Century Communities is basically done. We’re down to Pardee, Toll and KB. Pardee and Toll have a little bit of runway in front of them, but in the next year or two they will be wound up and done as well.”

Kunec said that kept the numbers down but what’s positive is KB is the biggest player in Inspirada and has had consistent numbers and growth.

“For the last three to four years, we have done 400 to 500 homes consistently and that’s not slowing up,” Kunec said. “We’re actually seeing an uptick for KB because of everything going on in west Henderson (with retail and commercial development and Raiders corporate headquarters practice facility nearby).

The development opened prior to the Great Recession and some 3,500 homes have been closed and another 500 to 1,000 under construction, Kunec said. KB has about 2,000-plus more units it can build.

“That brings 4,500 sold and the maximum capacity out there is 8,500 units and will likely be 7,500 units,” Kunec said. “We are more than halfway through the master plan. Many of these others have five, six to seven builders and that helps them continue their volume.”

KB recently opened a 17-model supercenter, the first in about six years. It will open a 20-acre park in the next 18 months.

“Our bread-and-butter product is town homes that start in the mid-$200,000s all the way up to single-story in our upper price point in the mid-$300,000,” Kunec said. “If you look at what’s trading in west Henderson, we still have a very advantageous price point for someone looking to get into their first home.”

Chris Armstrong, a senior vice president with the Olympia Cos., the developer of Skye Canyon, said the community is starting to hit a maturity level since opening in 2016 and recording 323 sales in its first full year in 2017.

“We got Woodside, Pulte, Pardee, Century Communities, Richmond American, Lennar and we added Beazer. Beazer has added a different product type of the mix — our first attached product with an alley load,” Armstrong said. “We feel like we have a great cross-section of product available across the market, and that has helped us as well. The market is great and have a lot of confidence in it.”

Armstrong said they expect similar sales in 2020, in which they will add Toll Brothers to their mix of builders.

In the upper end, luxury builder Blue Heron has sold 21 of 37 in its new community Vantage with a starting price of more than $800,000. The high point will be around $1.5 million.

Some six to seven homes will start construction in an adjacent custom-lot community with half-acre and one-acre lots. The one-acre lots on the lake cost $1 million and up.

Lake Las Vegas will start selling 26 quarter-acre lots in the community this year, starting about $350,000.

Pulte Del Webb is opening its first 55-plus community in more than a decade at Lake Las Vegas in 2020 with planned sales of 460 homes.

Pat Parker, the president of RainTree Investment Corp., the master developer of Lake Las Vegas, said the master plan has sold more land to builders in 2019 than it has during the last eight years. It was 140 acres.

“We will have our fourth Lennar community opening because we sold them more land on the North Shore,” Parker said. “We also sold Richmond American Homes land, so they will be opening on the North Shore. And we have another community by Woodside Homes. They will all open in early 2020.”

Woodside will do single-family homes. Richmond American will do an attached duplex project and small-lot, single-family homes that Parker said will be in the low $300,000s. Lennar will do two-story homes with views of the Strip in the mid-$300,000s, Parker said. He said he expects Lake Las Vegas home sales to be 20 percent higher in 2020.

“Lake Las Vegas is trying to make sure we keep product in the $300,000 range,” Parker said. “All of the master plans are focused on affordability. There’s not an infinite supply of land, so you have to work with density and have to work with product. This is the most affordable, and we see it as a nice market for us. We were probably $350,000 so we’re trying to get a little lower than that.”

The supply of affordable land continues to be the biggest barrier for the Las Vegas market Parker said of the valley’s housing market for 2020. All of the builders are having to be more creative with density as a pivot to use the available land, he said. 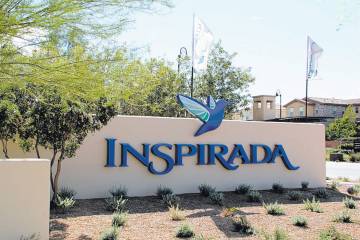