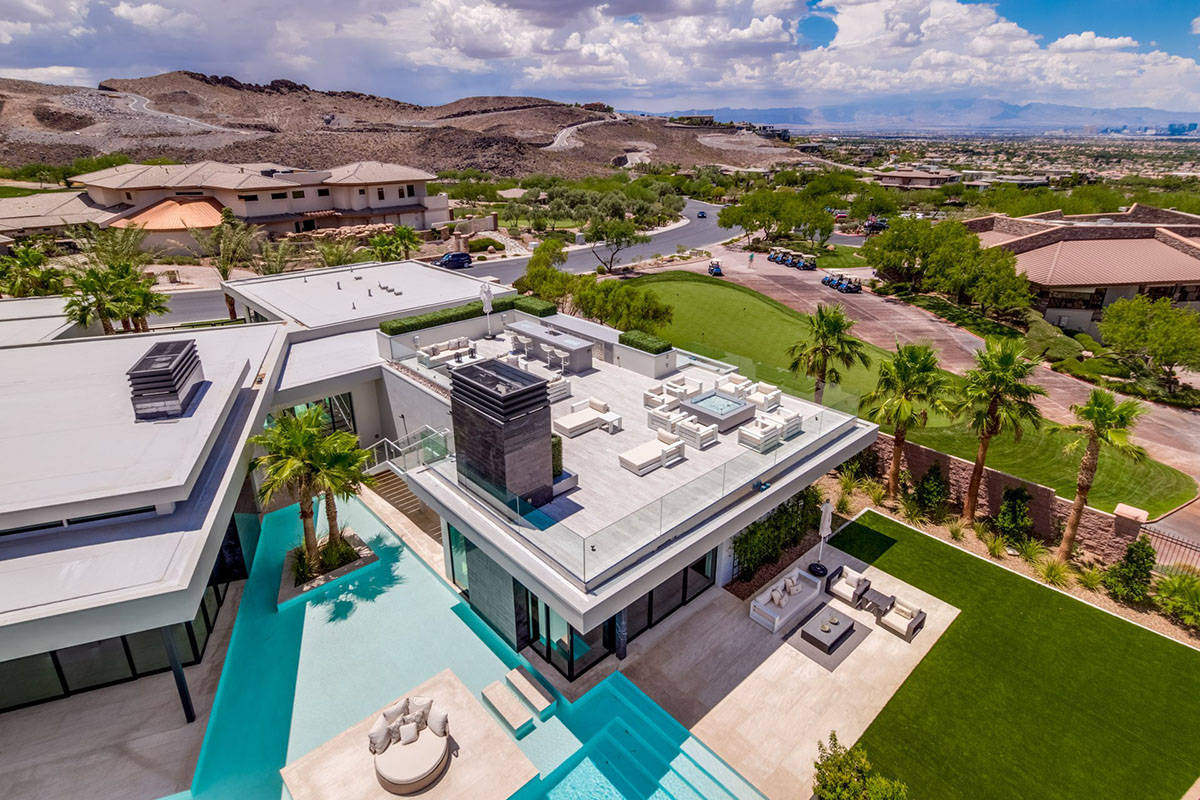 This custom home in MacDonald Highlands has water features, which is a trademark of Dan Coletti, owner of Sun West Custom Homes. (Ivan Sher Group) 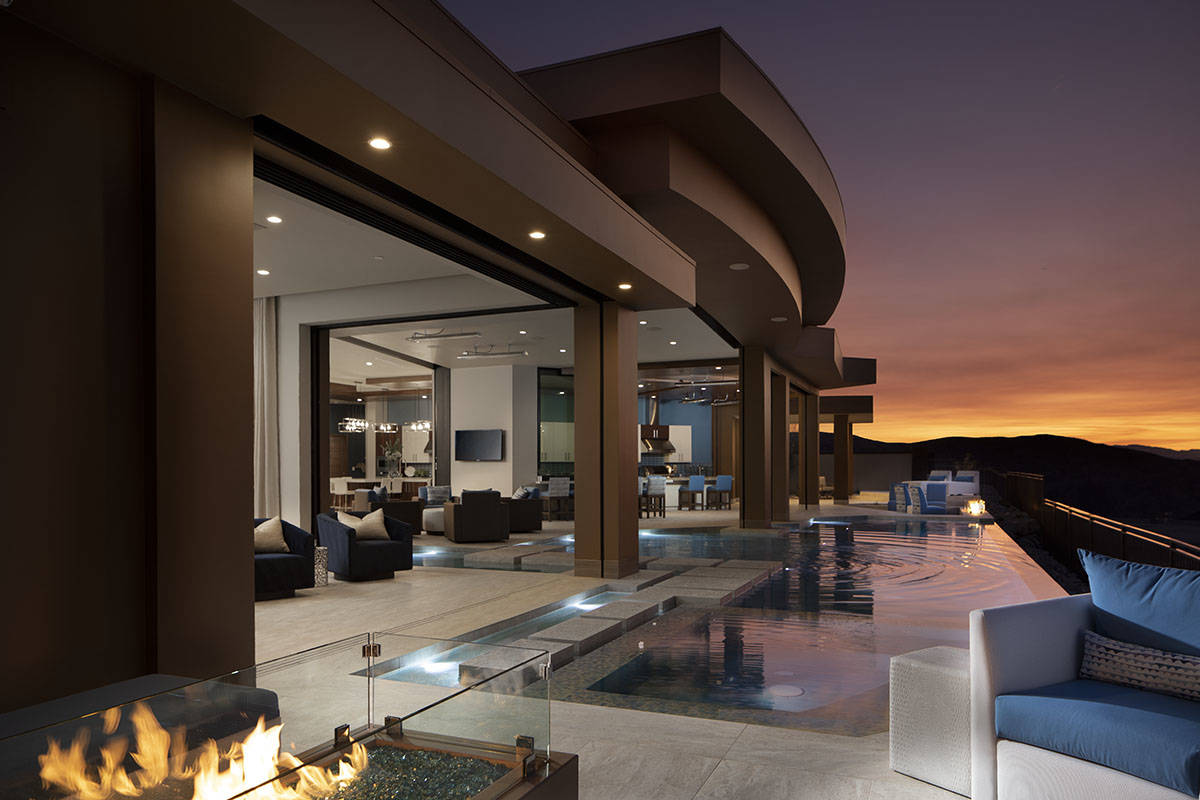 Sun West Custom Homes is known for building water features that flow through their mansions. (Jeffrey A. Davis Photography) 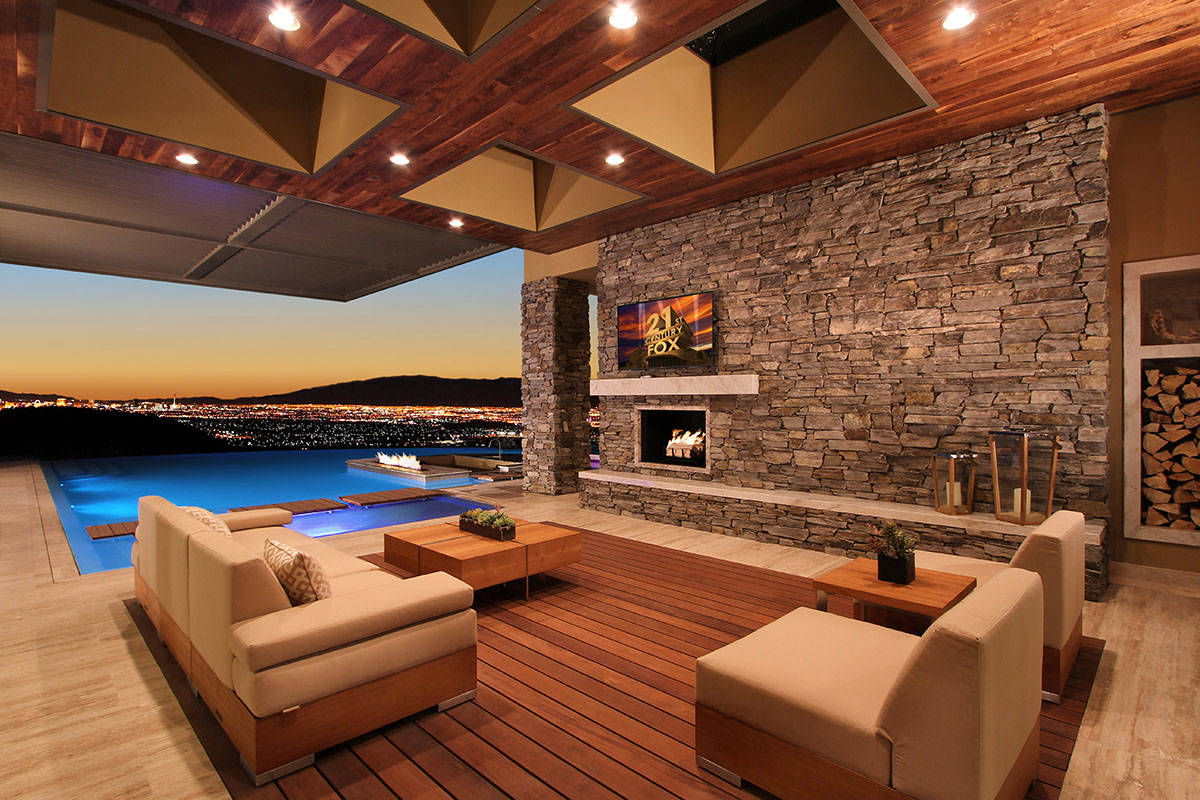 Pools like the one in this MacDonald Highlands mansion become a statement about the property. (Sun West Custom Homes) 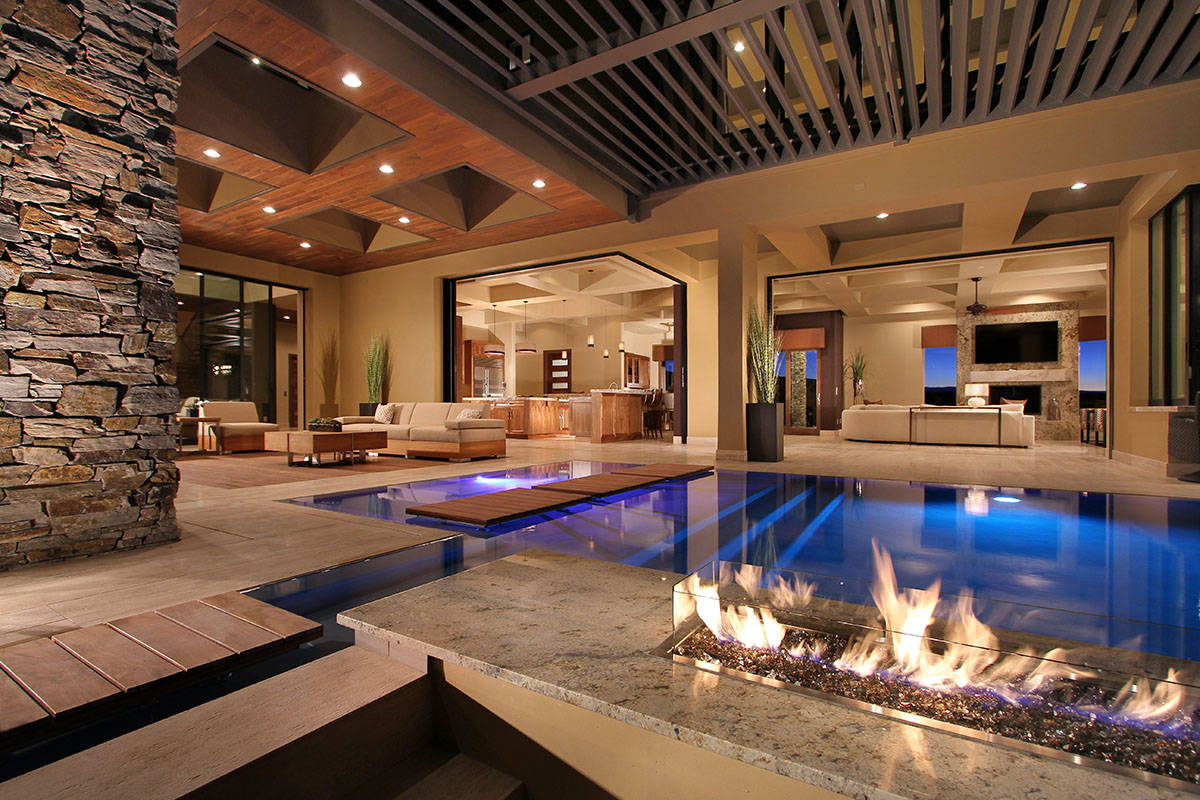 Multimillion-dollar luxury homes and six-figure pools to match go hand-in-hand. But pools for luxury homes aren’t simply like those in moderately priced homes, which serve only as a place for family, friends and neighbors to cool off from the heat. Builders and Realtors said pools in luxury homes are an extension of that property and even celebrated for the view they provide from the inside. None have ever come across a multimillion home home without a pool.

“In the luxury price range, a pool is critical and becomes a focal feature,” said Realtor Ivan Sher with the Ivan Sher Group of Berkshire Hathaway. “A lot of the homes, you walk in and the water comes right up to the edge (of the home) or it’s a resort-style pool. Those are enticing and engaging amenities.”

Since Las Vegas is in the desert, water is an important feature and homeowners envision their luxury homes and pool as an enclave and relaxing place for them and their families.

“If (they) are from out of state and buying a home here, they envision a place where they’re playing by the pool and barbecuing and all of the things families like to do,” Sher said.

The infinity-edge pools have been popular with luxury buyers and give the illusion of people living on the water. There’s an interior edge of the pool where the water flows usually off the back into a 2-foot wide trough on the outer edge into a basin and recirculates back into the pool.

“An elaborate pool isn’t what people are necessarily looking for,” Sher said. “They’re looking for the classic rectangle. That is doing really well compared to the ones with the fake rocks that people are shying away from, especially if the home is contemporary. Less is more.”

Kristen Routh-Silberman, a Realtor with Synergy Sotheby’s International Realty, agreed that the pool shape has changed over the years. The irregular-edge pools with rock waterfalls have not only disappeared to be replaced by classic shapes but now glass-edge pools are popular because they keep the water warmer, she said.

“If it comes down to two luxury homes and one has more of a classic-shaped pool that’s linear versus the one that has the grotto (with cavern-like spaces), they’re going to go for the classic shape pool,” Routh-Silberman said. “The good news is you can always remodel your pool. Most people are getting rid of the grotto pools.”

Heidi Kasama, a Realtor with Berkshire Hathaway, said luxury homes not only require a pool but a “wow” pool that makes a statement.

“A lot of people, today, want one that’s integrated into the lifestyle of flowing from the indoors to outside,” Kasama said. “Whether they put their toes in it or not, they want that to be part of the statement of the home. It’s a requirement to have these well-designed, all-out beautiful pools as part of their properties.”

The one-time home of investor Sam Nazarian in The Ridges had a pool that backed up to the house, and people could reach out the window and touch the water, Sher said. It’s described as a meandering lake-sized pool that sits under an overhang and features a multi-stool swim-up bar. The home sold for $11 million in 2015.

Routh-Silberman said one of the most spectacular pools she has ever listed was in Seven Hills in Henderson. The pool was 100 feet long — three times the normal size — and was featured on HGTV’s “Pool Kings.” The home sold for $5.6 million. The home had a cascading waterfall and rope from the second floor of the home that people could use to swing into the pool, Routh-Silberman said.

“The house was fabulous to start with, but that pool sold that house,” Routh-Silberman said. “The pool has a wet deck, spa, sunken fire pit and swim-up bar. It had it all.”

Kasama pointed out the new listing this week of a $25 million home in Country Club Hills that public records show is owned by Steve Wynn. It has a hotel-style pool on the estate.

Kasama also mentioned the pool on the roof at One Queensridge Place condominium homes in the west valley. She called it a mini-Caesars’ Palace resort pool and spa with statues, marble tile and that’s “completely over the top. They are paying almost $2,600 a month in dues there. Those are the types of amenities people are looking for.”

The Penthouse at Palms Place is also a “statement pool” that goes with such a property, Kasama said. “You’re out on the balcony and the pool extends out with a glass bottom so when you’re swimming you can see through it down to the Strip,” Kasama said. “They have great lighting, and it’s pretty incredible.”

Not every noteworthy pool in Las Vegas, however, is outdoors. The famous Underground House, designed as a bomb shelter, has a 6-foot deep pool, spa and barbecue area.

Some even take the water outside the pool.

A home built by a Canadian investor overlooking DragonRidge Country Club in MacDonald Highlands, has a pool that connects the front of the house to the rear by going under the foundation. It was built by Sun West Custom Homes.

Sun West Custom Homes also designed a 5,900-square-foot pool with a spa, cold plunge pool, putting green and outdoor kitchen in the hillside community of Ascaya in Henderson. The home’s called Villa Azul or Blue Home and has a sit-in sunken area inside the pool with water all around.

“It’s important to me as a designer of custom homes, I like to use the pool as an extension of the house,” said Dan Coletti, Sun West’s owner. “It’s about the tranquility of the water and bringing it in closer to the home. It adds a certain ambiance to the home.”

Coletti said, however, that pools are recreational as well so it’s important to blend the two together. Some people like to swim laps or play volleyball, he said.

“The balance for me is that it functions really great for people if you’re having a backyard pool party,” Coletti said. “In reality, most people don’t use their pools everyday, and you want it to look good year-round but yet function when you have a party.”

Coletti said he’s never had a customer of his multimillion-dollar homes who didn’t want a pool. The only question he asks them is if they are “big pool people,” whether they swim laps and the ages of their children.

“It’s been quite a while since I put in a slide,” Coletti said. “People say they will only use it for a couple of years and what will we do with that slide later. And, customers who like to swim laps, will say let’s make the pool wider than deep.”

While most luxury buyers live in gated communities that have a community pool, Coletti said they still want privacy and the ability to “take a dip whenever they feel like it and do it quickly.”

That doesn’t mean people want deep pools for diving but rather go for the shallow look that might be only 18 inches in some places and 3 to 6 feet in other places — 4 feet for swimming laps. They just want to see the water and don’t need it for swimming, Coletti said.

“They only need so much area to be swimmable, but they love the way the rest looks outside the master bedroom,” Coletti said. “That’s what I do a lot of times.”

A $12 million Mediterranean mansion under construction in Southern Highlands by a Beverly Hills developer plans to start construction this summer on a $1 million, two-level infinity-edge pool with grotto,waterfall and swim-up bar according to Bob Barnhart, owner of Luxurious Real Estate and the listing agent.

“Having a pool like that is extremely important,” Barnhart said. “People are looking for that resort-style and indoor outdoor living and megamansion. (They) want a resort-style pool with it. Everyone uses that term lightly for that pool. If you are going to do a $10 million to $12 million property, you have to have the pool to go along with it.”

Going without a pool in a luxury home is a mistake, builders and Realtors said.

Ernie Domanico, the founder of luxury builder Domanico Custom Homes said he tried to talk a friend out of building a 5,000-square-foot home without a backyard pool in a golf-course community. That would make it harder to sell the home one day, he said.

“A pool is a must in the luxury market in Las Vegas whether it is summer or wintertime. It doesn’t matter,” said Domanico who recently built the home of former NBA player Jordan Farmar in Southern Highlands for $3.5 million with a pool. “You don’t put a $70,000 swimming pool in a $3 million house. It needs to be at east $125,000 or up. The last ones we have been building are $180,000 to $300,000 pools. I don’t know anyone that wants to build a home of $2.5 million to $3 million in Las Vegas that doesn’t want to have a pool.”